Home  /  Entertainment  /  Movies  /  The Women of Star Wars: The Ideals and Tragedy of Padmé Amidala

The Women of Star Wars: The Ideals and Tragedy of Padmé Amidala 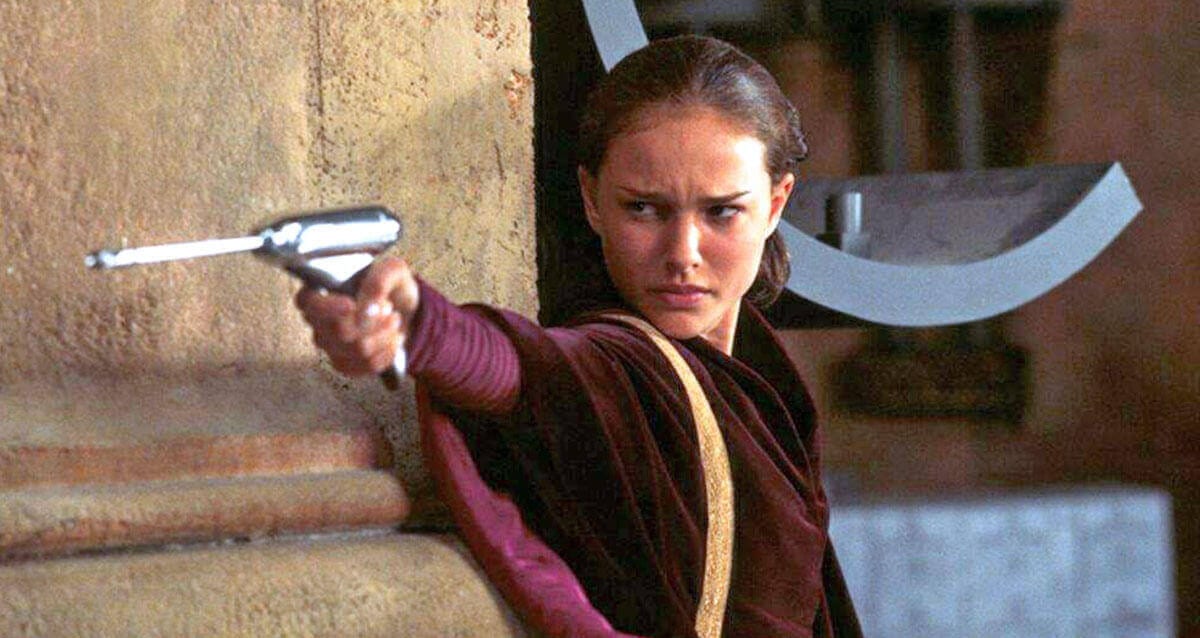 Welcome back to The Women of Star Wars. In this second installment, naturally, I’d like to talk about Padmé Amidala. When Padmé was introduced in the Star Wars prequels, I liked her a lot, although not as much as Leia. As a child, the politics within the Senate and on the planet Naboo went over my head. I interpreted Padmé more in visual terms, her extravagant costumes and unusual makeup leaving an indelible mark on my mind. As a kid, Padmé was the character I admired the most in The Phantom Menace. After all, she was a beautiful, powerful young woman skilled with diplomacy and a blaster (much like her daughter would become). I even went as Padmé one Halloween, specifically in her white arena battle costume from Attack of the Clones. Back then, wooden acting and cringe-worthy dialogue didn’t factor into my assessment of film or appreciation of characters. Even now, I see a lot of good ideas that occasionally shine through. 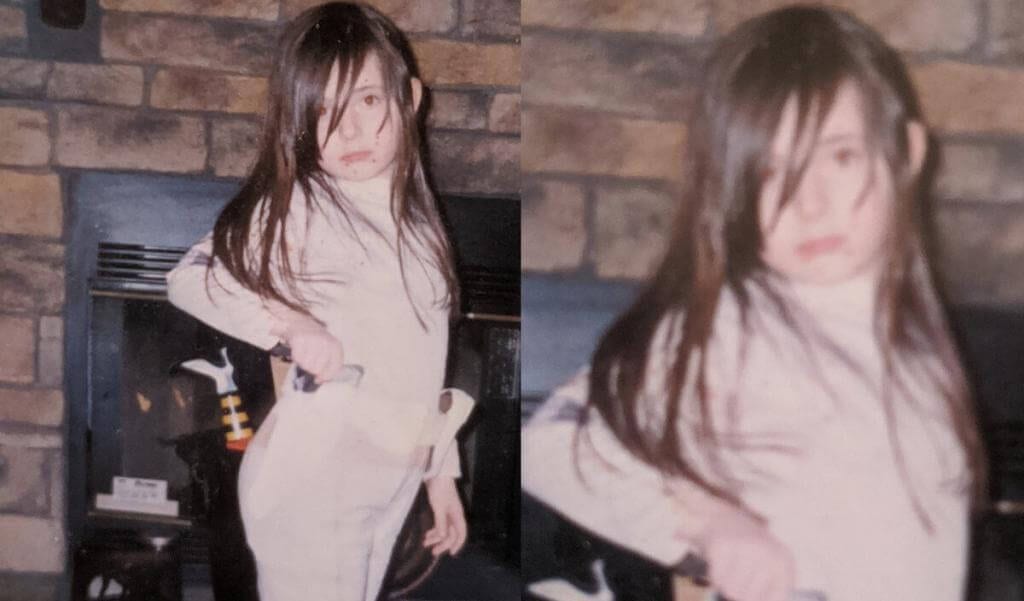 In The Phantom Menace, Padmé’s goal is reminiscent of Leia’s in A New Hope: to protect her people and home. As Queen, Padmé takes a bold risk in endangering herself. Even with one of her handmaidens(Sabé, played by Keira Knightley) taking her place to protect her, Padmé willingly puts herself at risk by going with the Jedi. In addition to her selflessness and bravery, Padmé displays humility in her willingness to bow before Boss Nass when she needs his help. She also has empathy for people other than her own, such as Anakin and his fellow slaves. Even with Jar Jar, she shows patience and understanding, which is more than can be said even of Qui-Gon at times. His irritation with the Gungan is understandable, but it makes Padmé’s unending compassion that much more impressive. Much like Leia, Padmé maintains feminine qualities and serves as a sort of mother figure to some of the others while being fierce and powerful in her own ways. I do have issues with this film and this particular character; the creepy flirting with pre-pubescent Anakin and lack of chemistry with the Jedi or really anyone else in the movie come to mind. But I think the bare-bones ideas present are good, and I do look back on Padmé fondly for reasons previously mentioned. 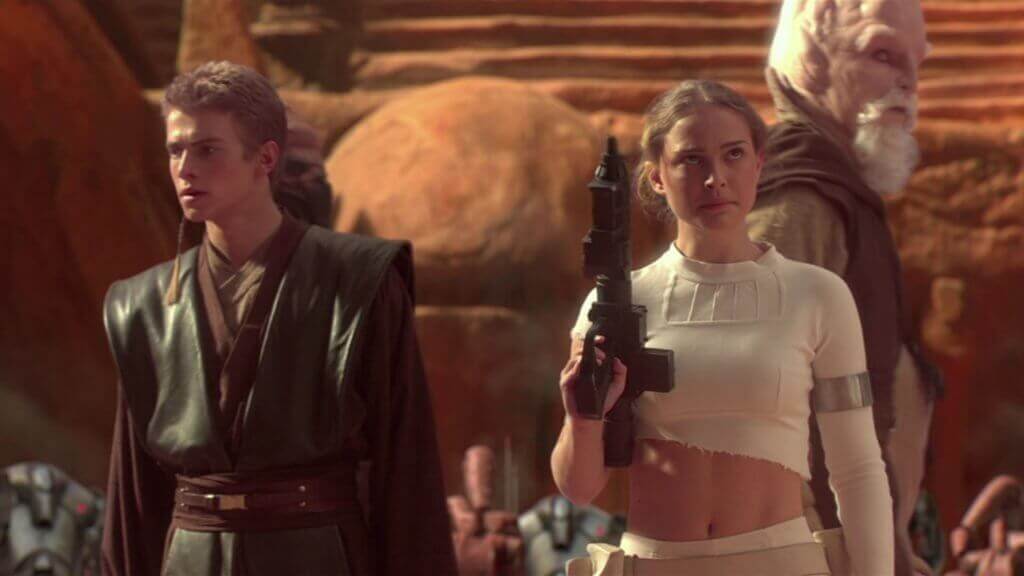 In Attack of the Clones, Padmé has gone from a Queen protecting her subjects to a senator who needs Jedi protection. Confusing in-universe politics aside, this transition puts Padmé back in contact with little Ani from Tatooine, now a growing Jedi apprentice. I have a lot of problems with this relationship, many of them, unfortunately, stemming from this movie. At the core, it does make sense for these two characters to cling together, having known each other during a simpler time and won a significant victory together. The fact that Padmé was a relatively mature teenage Queen when she met the preteen Anakin does sort of taint their future interactions. Sadly, Attack of the Clones does nothing to fix or lessen the creep factor. Anakin’s obsessive, possessive treatment of the Senator and her acceptance of his massacring the Sandpeople are alarming developments. It’s almost a moot point by now to even mention exchanges about Anakin’s hatred of sand and Padmé dying a little every day since Anakin re-entered her life. From top to bottom, while the attraction makes sense (once Anakin’s out of space-diapers, at least), their whole connection is just unsettling. I guess it makes sense for the guy who became Darth Vader to be controlling and predatory towards any potential girlfriend. However, why would such a powerful, intelligent girl choose to tolerate it? She calls him on his behavior throughout the movie, but ultimately reciprocates and rewards him for it. By no means am I a women’s advocate who thinks men are always wrong, and in fact, I believe bad relationships almost always have two culprits. However, the romantic subplot in Attack of the Clones reeks of domestic trouble long before the two are even together. Again, even if this was intended to be part of foreshadowing Anakin’s turn to evil, it’s just not done well. Overall, aside from the action sequences, Clones does damage to Padmé far more than it develops or improves her. That being said, she again has gorgeous costumes, and their wedding scene, at least in a vacuum, is beautiful. One is left to wish Lucas had gone a little simpler with the overall love story. 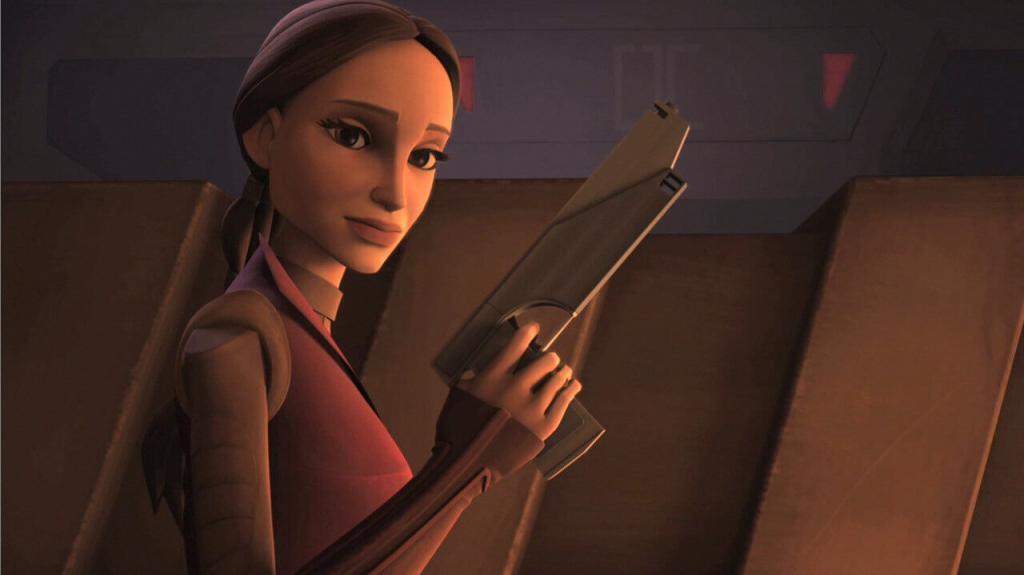 Before moving onto Revenge of the Sith and the end of Padmé’s journey, I’d be remiss in neglecting her arc in The Clone Wars. Just as with the other characters and stories, The Clone Wars fills in the blanks regarding Padmé’s adventures between Episodes II and III. The series explores a lot more of what I would have liked to have seen in Attack of the Clones. For example, Padmé spies on a colleague and former lover (Season 2, Episode 4, “Senate Spy), offers aid to people even after they betray her (Season 1, Episode 8, “Bombad Jedi”), helps contain a deadly disease at her own risk (Season 1, Episode 17, “Blue Shadow Virus”), and more. She never becomes an infallible goddess, though, and always needs the Jedi’s help, as they need hers. The series also gives Padmé more opportunities to play off of other female characters, such as Ahsoka Tano and Satine Kryze (both of whom will be discussed later in this series). One of the best things about The Clone Wars is that events, characters, and relationships that the films barely convey or even imply are explored in greater detail. If you only watched The Clone Wars, you might even “ship” Anakin and Padmé. I avoided this series and its premiere movie like the plague when they first came out because it was hard for me to picture Star Wars in animation. The promotional material and character designs did little to change my mind. Finally, after years of listening to how great and ground-breaking the show was, I decided to watch it before Rebels came out. If you like Star Wars, whether you like the prequels or not, this series is a great watch, and it really adds depth that was missing to characters like Padmé and Anakin. The only thing that bothers me about Padmé in The Clone Wars is that Catherine Taber’s voice annoys me at times. It’s higher than Natalie Portman’s, and she sounds almost like a valley girl. However, I realize that’s a personal thing, and it really amounts to nitpicking. 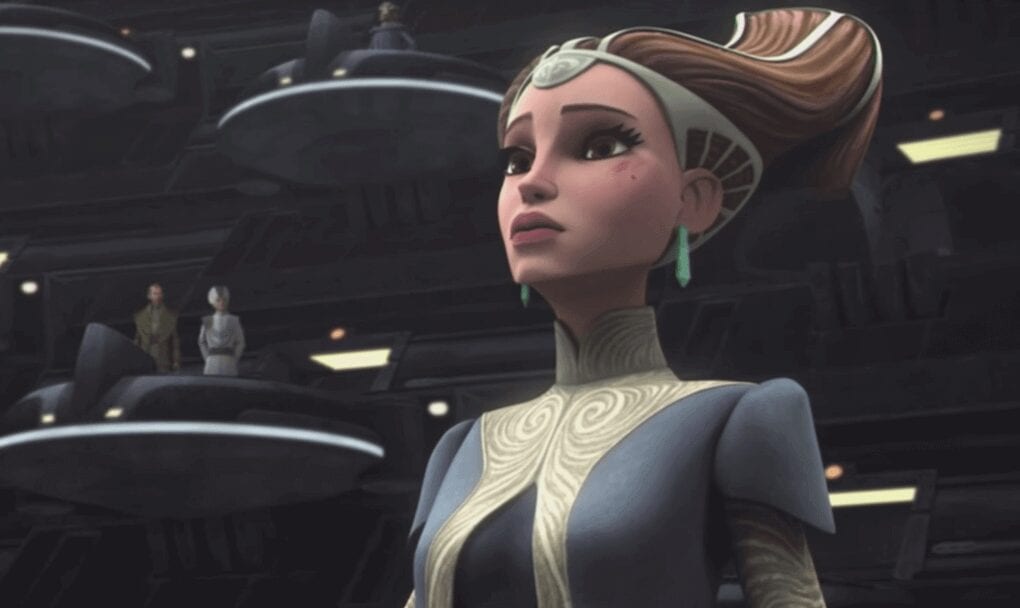 Finally, on to Padmé’s best cinematic appearance (by default, to an extent), Revenge of the Sith. Residual awkward dialogue notwithstanding, I think Padmé and Anakin’s relationship really is handled better in this film. Furthermore, Padmé is back to actually doing stuff, such as trying to appeal to Anakin’s better nature and lamenting the fall of her beloved Republic. Almost all of the characters fare the best in the third and final prequel; this is certainly true of the tragic Senator. Her ideals, unbeknownst to both parties, stand in direct conflict with those that her beloved husband will come to represent. The person she trusts most in the galaxy is essential to Palpatine’s plan to dismantle the Democratic government and eliminate future generations of Jedi. Still, even after he’s (again) wiped out innocent children, this time only because the Chancellor asked him to, Padmé tries to reason with Anakin. By this point, it’s too late, and Anakin would sooner turn on his pregnant wife than his new master. This confrontation results in the ultimate irony of Anakin attacking the very person he embarked on this journey to protect, and ultimately, her death of a broken heart. This is really my only Padmé-related gripe with Revenge of the Sith: her demise. Palpatine’s manipulations on Anakin, his turn to the Dark Side, and ultimate assault on yet another undeserving, vulnerable innocent are masterfully handled. But I think it would be more powerful if Padmé died either directly because of the injuries Anakin inflicted. Perhaps, as some fans have suggested, Palpatine should have ended her himself to tighten his grip on Anakin. As is, her death due to a loss of “will to live” is bad storytelling and, frankly, an act of character assassination. Padmé loved Anakin, but she was never emotionally dependant on him to this extent. Furthermore, you’re telling me she has no desire to live, even to support her two newborn, helpless children whom she wanted and was excited about? Like many of her interactions with Anakin in Episode II, this weakens her character, as well as the overall narrative. And you know what? That’s a damn shame. 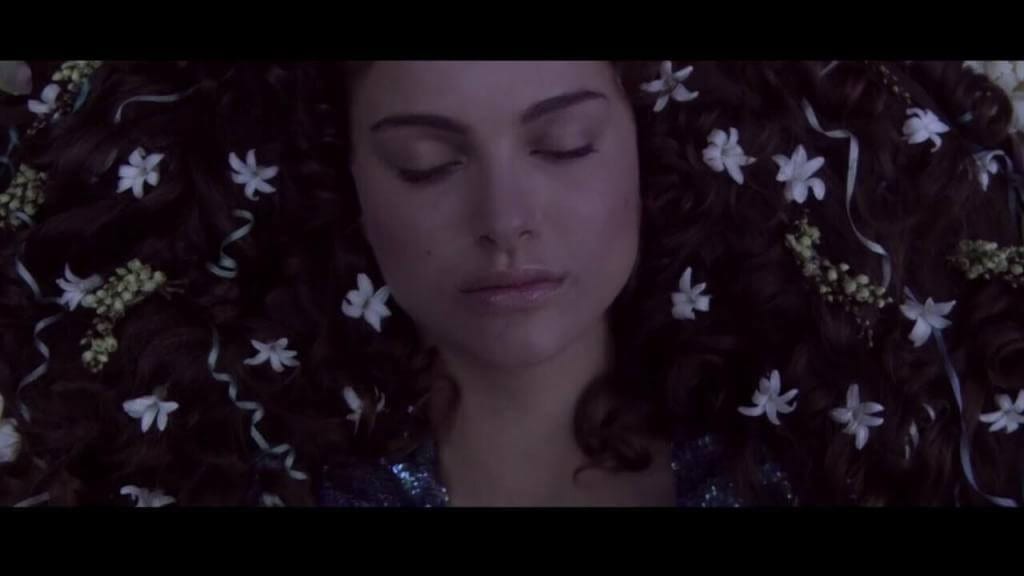 Padmé has had a lot of ups and downs, both in-universe and in terms of the quality of her portrayals. The tragedy of this character is two-fold. Of course, her story in the films is akin to a Greek tragedy, with lovers separated by death and a hero succumbing to evil in spite and because of his good intentions. But there’s another tragedy that exists outside of the on-screen narrative, behind the scenes. It’s really sad to me that Lucasfilm would, more than once, present an interesting character with selfless goals and the qualities needed to carry them out, only to sabotage her characterization. So many times, the prequels sacrificed character for story, and Padmé is a prime and devastating example. They needed Padmé and Anakin to fall in love, and rather than thinking about how to make that seem natural and romantic, they took shortcuts and gave us a toxic, creepy love story. Padmé needed to die so Luke and Leia could be orphans, so rather than killing her violently or through medical causes, she chooses to die. Padmé shines the most in The Clone Wars overall. Regardless, there’s much to admire about her in the prequels in spite of these failures. She has a lot of qualities I loved in Leia: bravery, intelligence, altruism, and friendship with her fellow heroes. Since Disney acquired Star Wars, Leia has been disrespected in many of the same ways as her mother. In both cases, there’s plenty to praise and lots to lament. I want to be reasonable and acknowledge the good and bad alike. That being said, I’ll always look back on the brighter moments in the canon that made me love these characters in the first place.