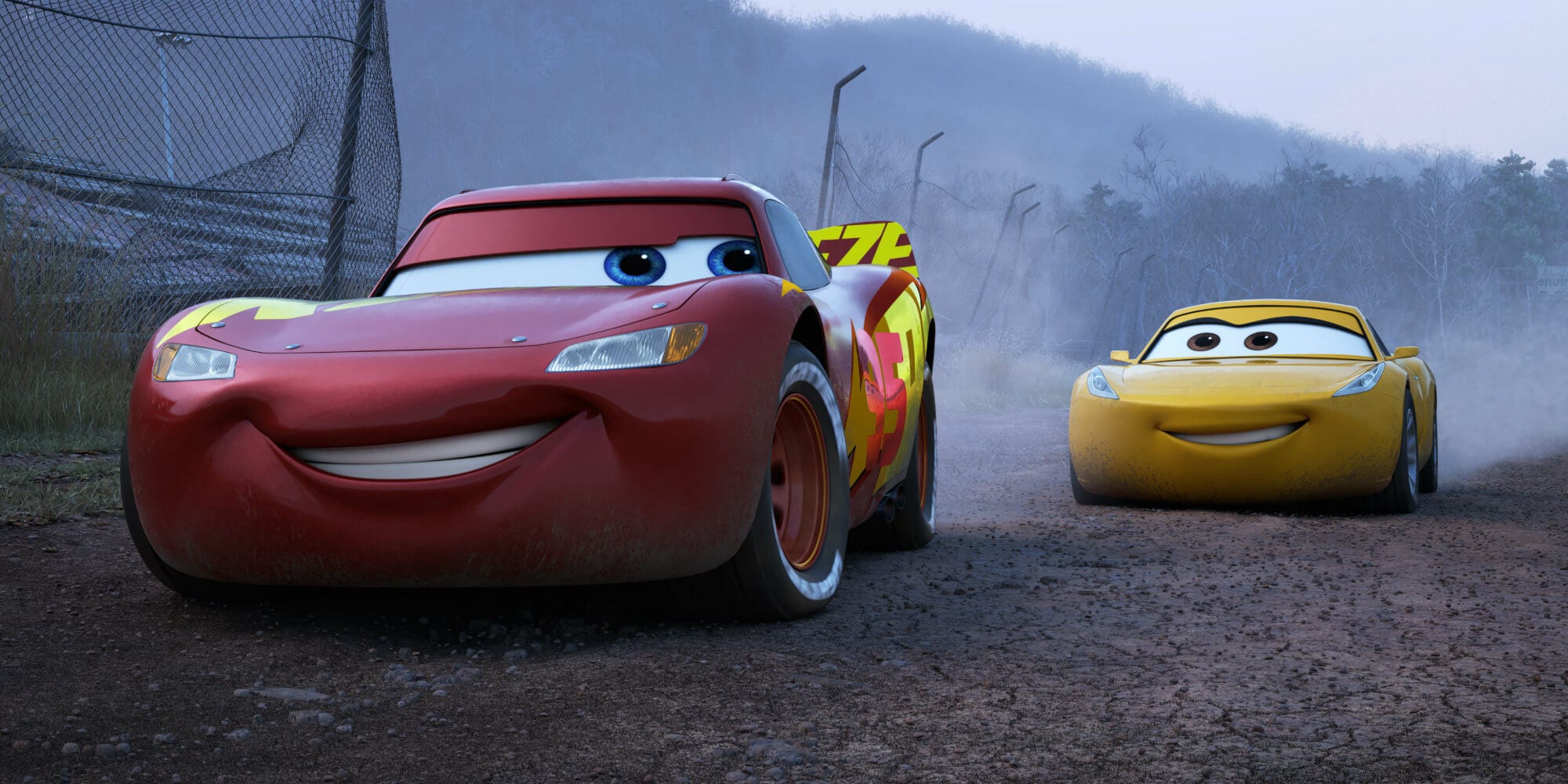 Munir: Hello and welcome to a new edition of A Decade of Pixar. Today, we are reviewing a film that possibly nobody wanted, Cars 3. The Cars franchise has been the ugly duckling of the Pixar canon, and after the negative reviews that Cars 2 got, nobody was clamoring for a third one. Pixar, nonetheless, ignored the naysayers and went ahead with another sequel. They corrected the mistakes done in the first sequel, completely ignoring the events of Cars 2, making this film a more direct sequel to the original. They sidelined Mater, who becomes a minor character in this film and gives the spotlight again to Lightning McQueen. All this, plus a story about aging and passing the torch, marked a clear improvement over the second movie, and Cars 3 was better received, although reviews were not ecstatic. Audiences also responded tepidly, and it became Pixar’s second financial disappointment after The Good Dinosaur. It’s a shame since Cars 3 is a thrill ride with a compelling message. I guess the damage that Cars 2 did was bigger than this film could correct, and audiences were already done with the franchise by the time this one premiered. What do you think of it, Virginia?

Virginia: I really, really enjoyed Cars 3 in theaters when I saw it in 2017, again for my birthday. That’s a weird little tradition I have. The trailers looked promising, but as you said, I wasn’t begging for more Cars after the second film. Regardless, I think Cars 3 is a worthy successor to the first film, and I personally like it the best out of the trilogy. Lightning McQueen’s arc in Cars was about learning humility and to value other people’s feelings, and in Cars 3 it naturally evolves to be about accepting it when your time in the spotlight is over. Cars 3 shows a clear parallel between Doc’s training of Lightning and Lightning’s training of Cruz Ramirez, and in this regard, the film also honors the late Paul Newman, something the second seemingly had no interest in doing. Cars 3 even utilizes old audio recordings of Newman to bring his character Doc back to the forefront in spirit. While Cars had a good story and character development, Cars 3, in my opinion, gets the edge because it has something to say about legacy, growing up and even the disadvantages some (Cruz) face in life.

M: I agree with you that Cars 3 actually has a character arc and that immediately makes it a better film than its predecessor. I still prefer the first one, but I think Cars 3’s “passing the torch” theme is really well done, particularly because Cruz Ramirez is such a compelling character. She’s outspoken, smart, driven, and is not afraid of calling out Lightning when he’s wrong. She’s exactly the apprentice Lightning needs because she came from nothing. Unlike him, she is not used to the spotlight and takes nothing for granted. Her clashing personality with McQueen makes for thrilling drama and comedy, much more so than putting him with Mater. Also, Cristela Alonzo is great in the role and completely embodies the part. Cruz is a very big part of why Cars 3 works.

V: Mater is less a character and more a series of incoherent attempts at comedy; I think just about anybody would be a better character foil than him. I agree completely about Cruz, and while this film is packed with new, enjoyable characters, she steals the show. She highlights everything Lightning needs to learn, and she learns from him as well, with him eventually becoming her trainer. Cars 3 is interesting because it starts out being about Lightning’s attempts to get back into racing and make a big comeback, but eventually you realize it’s really Cruz’s story, and Lightning’s arc is learning that he doesn’t always have to be the center of attention. Much like his own mentor Doc, he ends up being a pretty great teacher to his new protégé. 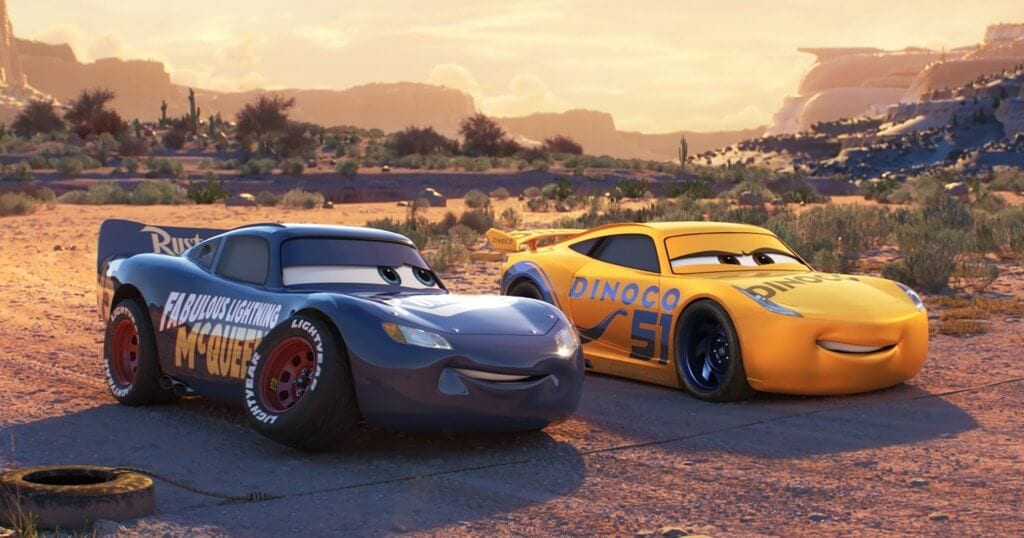 M: I also like how they honor Paul Newman’s memory in this film (almost ten years late, but still better than the throwaway line they did in Cars 2). Doc Hudson is a great character in the first Cars, and I like how they were able to integrate him in this film’s narrative. I also like that they were able to blend in the rest of the Radiator Springs characters more seamlessly than its predecessors. They were not afraid to limit their roles because the meat of the story is between Lightning and Cruz, but they all serve a purpose instead of being forced in like they were in the second movie, where they were just standing there. What do you think of the film’s antagonist, Jackson Storm? I think he was OK, but it reminded me of Chick Hicks, and there wasn’t any particular trait that made him stand out.

V: I agree completely about the Radiator Springs gang. They don’t focus on them needlessly, and as you said, they’re not just randomly present. In Cars 2, they show up in the last leg of the Grand Prix, and it makes no sense, and I’m glad Cars 3 doesn’t resort to such lazy writing/fanservice. As for Jackson, I think he’s the film’s weakest link. I like Armie Hammer’s performance, but you’re right that he has no personality. And even then, Michael Keaton as Chick Hicks had more energy and charisma, in my opinion.

M: Agreed. Michael Keaton shows a lot of range and makes Chick Hicks a charming fool until he becomes a full-blown asshole at the end. What do you think of the score? I really like that they brought Randy Newman to score this film. Don’t get me wrong; Michael Giacchino’s score is one of the best things about Cars 2. But bringing Newman back gives this an organic unity to the first film, and this makes the second even more of an outlier. Newman’s score strikes the perfect mix of high-adrenaline and heartfelt, quieter moments that give scenes more oomph.

V: Things like this make it even more tempting to ignore 2 within the series. I agree that bringing Newman back was the right move; in many ways, Cars 3 was harkening back to the original film, and this is one example. Cars wasn’t a great film, but it was a good one that people liked. 3 is wise, unlike 2, because it strives to embody the things people loved about the first film. 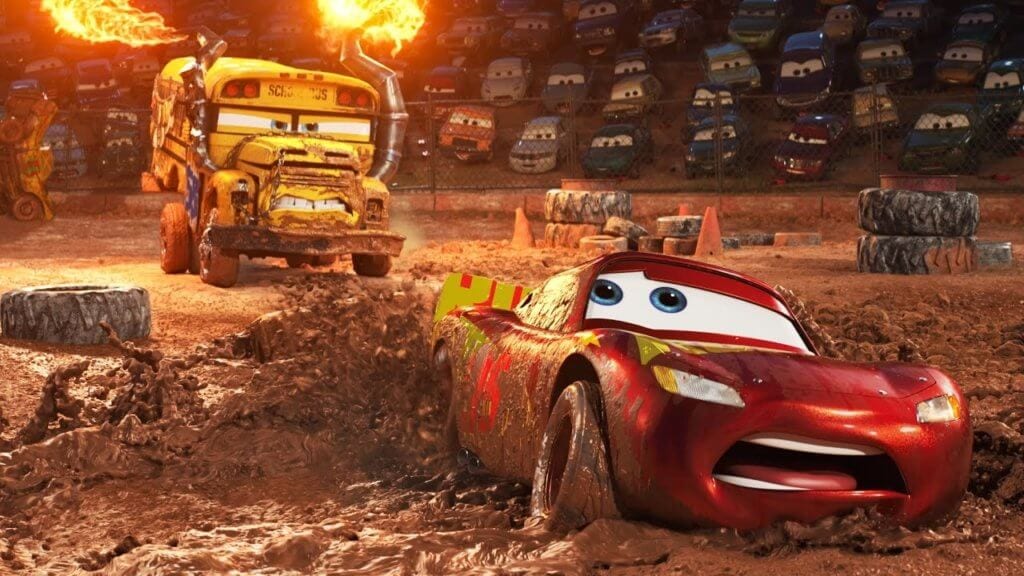 M: Maybe it’s useful to see Cars 2 as a misguided spin-off rather than an official sequel. As you say, Cars 3 goes back to the first film, but it’s not a retread. Rather, it expands on the narrative and gives the title character a heartfelt and meaningful bookend, which makes it very disappointing that people ignored this film. I understand the bad taste that Cars 2 left in the audience’s mouths, but I hoped they would’ve given this one a chance. Hopefully, it gets discovered in the years to come and becomes more popular. However, I hope they are not thinking of doing another sequel. This one was a good closer, and it’s not Toy Story. Do you hope for another film?

V: I agree; it offers a logical evolution of Lightning’s journey, rather than revisiting what has already been explored. I also wish the film had seen greater success, because I think it’s quite good and not what people were expecting. That being said, I can’t fault people not wanting more after seeing the second movie. I agree that Cars 3 is a really good place to leave the characters and their story, so no, I would prefer they not continue to make sequels. And honestly, I doubt they would after this one underperformed, so I think we’re safe on that front. 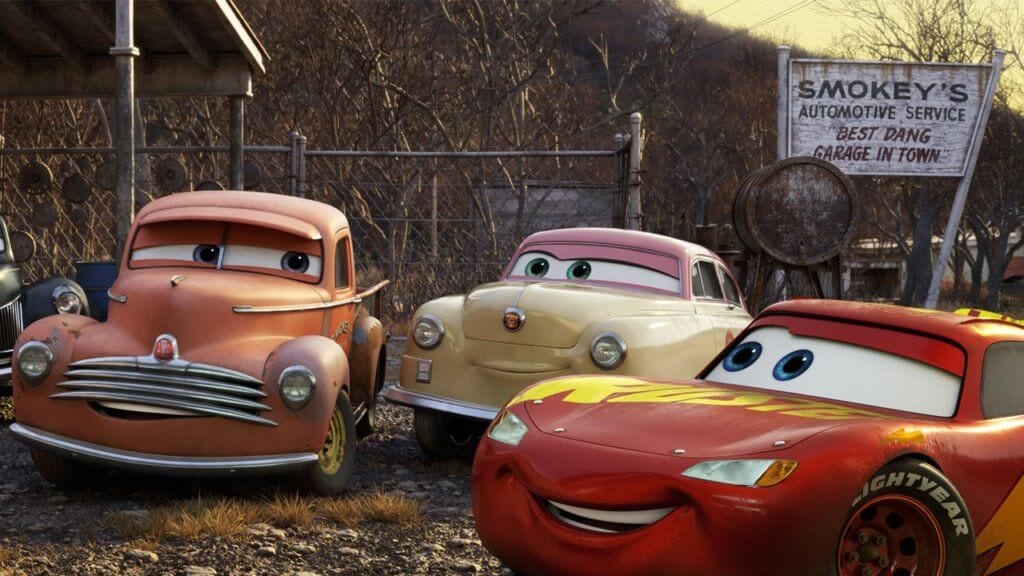 M: What are some of your favorite scenes? Mine is the one after the accident because it shows McQueen weak and traumatized, which propels the whole story. Also, the way they handled it was really good. Another scene I like is when they meet with Doc’s old friends, and, of course, the ending when he finally passes the torch to Cruz.

V: I love the scene featuring Doc’s friends, especially Louise Nash, voiced by esteemed character actress Margo Martindale (who I like a little too much thanks to Bojack Horseman). These folks let Lightning see his late friend and mentor in a whole new light, which also plays into his journey in the film. I also like the scene where Cruz confronts McQueen and explains her dreams and motivations behind becoming a trainer. This scene moved me more than anything in either of the other Cars films, and I’d say it hit close to home for a lot of people. This sequence also plays into Lightning’s eventual epiphany.

M: Agreed, that’s a great scene. So, I think that’s it for our review. To sum up, Cars 3 rights the wrongs made by its predecessor, and hopefully, more people will come to appreciate it. It has a meaningful arc, stunning animation, and compelling characters. What do you think of it? Let us know in the comments and check back soon to read our review of Pixar’s fourth (and last) original film from this decade, Coco.

Cars 3 isn't a perfect movie, but it is an excellent one, and a damn fine sequel to the first film. Returning to the tone and characterization of Cars put it above the second film by miles, and the music and animation are lovely.