Munir: Hello and welcome to a new review in A Decade of Pixar. Today we’re looking into what is perhaps Pixar’s most anticipated sequel, Incredibles 2. Ever since the first one was released in 2004, fans have been clamoring for a continuation of the Parr family’s adventures. After 14 years of waiting, the sequel arrived last year to a lot of fanfare. Critics loved it, the film was a smash at the box office, and it’s the only Pixar sequel – outside of the Toy Story universe – to have gotten an Oscar nomination for Best Animated Film. Brad Bird returned to write and direct, Michael Giacchino returned to compose the score, and most of the first film’s cast (except Spencer Fox as Dash, and the late Bud Luckey as Rick Dicker) also returned to voice the characters. This time, the focus of the film is on Helen Parr aka Elastigirl, but, just as in the first film, the whole family and their dynamic take the spotlight. I really like Incredibles 2, and it’s one of my favorite sequels. I don’t think it’s better than the first (which is my favorite Pixar film of all time), but it’s a great continuation that expands upon what came before while telling a compelling story. I know that the first Incredibles is also your favorite Pixar film, Virginia, so what did you think of the sequel?

Virginia: The Incredibles is my favorite movie I’ve ever seen, so when a sequel was finally announced, I was beyond excited. I think many of us had simply accepted that Pixar was more interested in making sequels to their other properties, and writer-director Brad Bird had seemingly moved on to different things. When I saw Incredibles 2 on opening night, I was thrilled and liked it almost as much as the original film. However, what I experienced can be likened to the reactions of Star Wars fans seeing The Phantom Menace on the big screen for the first time. There’s a lot of spectacle, and you’re so excited for the continuation of the story, but over time, it simply doesn’t hold up. I’m not saying Incredibles 2 is a bad movie by any means. However, I don’t think it works very well as a sequel, and it’s my least favorite of Bird’s films. It borrows too heavily from the first movie for one thing. We’re back on the whole thing about legalizing supers, which was seemingly going to be worked out at the end of the first one. We also get no character development with Helen, which makes me wonder why they made her the lead; Bob is still the character who experiences meaningful change in Incredibles 2. I’d argue that Helen had a better arc in the first film than she does in the second, as she learns nothing and doesn’t grow or change during the movie. They also harp on themes from the first film but without the same nuance, such as bureaucracy and corruption. I was really anticipating this one and, as I mentioned, I had a great time on opening night. But overall, it’s lower on my list of Pixar films. 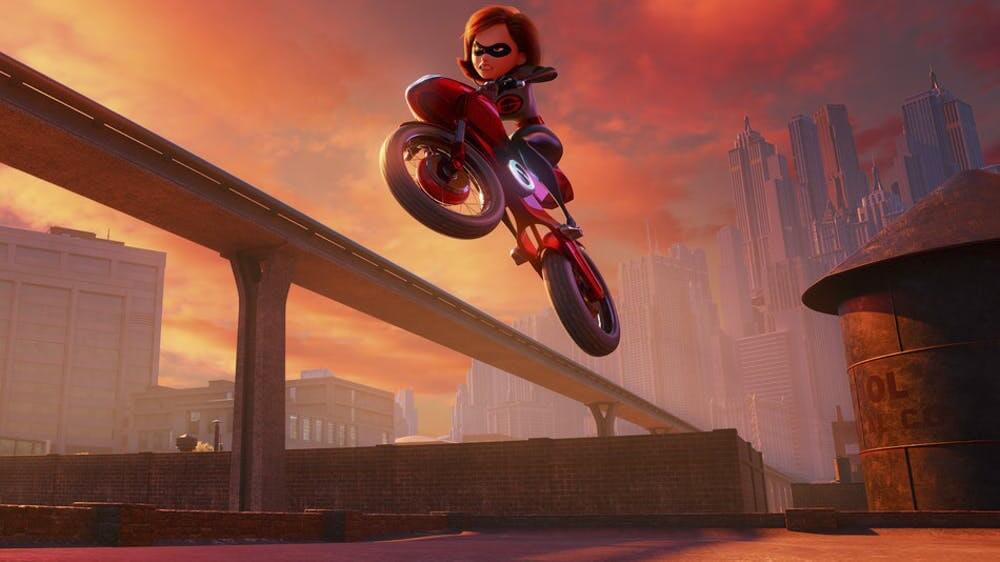 M: I think that part of that is because of the decision that the film was going to start right after the first one ended. For a while, I thought there was going to be some sort of time jump like with other Pixar properties. Instead, there’s none whatsoever, and we open with the family fighting the Underminer. In doing that, I think Incredibles 2 had to borrow more from the first film since it’s really continuing the story mere seconds after the original ended. With that being said, I really enjoy the reversal of roles that Bob and Helen have. I think in this film, Helen has to “learn” to be a super-hero again. In the first one, she’s totally against the family doing “super” stuff, and even at the end, she just allows Dash to compete if he never wins. There’s still lots of secrecy surrounding the superheroes. In this one, though, she’s the focus, and she’s not used to that (Bob, on the other hand, lives for it), so I think it was a nice change of pace that both have to learn to cope with the other’s strengths. For many years, Helen lived in the shadow of her husband, and this time she was the main event. And meanwhile, Bob had to retread and do the more mundane stuff like taking care of the kids. Also, while I think Syndrome is a much stronger villain, I do like Screenslaver’s motives to do what she does. I think it does what Bird does best: subtle critiques of society in a way to encourage us to be better. You can see that in The Iron Giant, The Incredibles, Ratatouille, and Tomorrowland. What I also like about this film is that it was able to incorporate Jack-Jack into the main narrative without being annoying or pandering. It could have been easy to fall into that pit, but the way it’s done is funny but also propels the narrative. And the action scenes are amazingly staged. Most super-hero films don’t stage their battle scenes very well, and they end up being a big VFX mess. Here, careful planning can be seen in every scene, nothing is wasted, and all the action is absolutely thrilling.

V: Helen fits perfectly back into the role, though. And we also got a couple of excellent stealth and action scenes with her in the original film. I will say that the action sequences in Incredibles 2 are amazing, my personal favorite being the one where she drives her motorcycle toward the runaway train. That being said, I just don’t think Helen has any meaningful character development in 2, and ultimately that’s one of my biggest gripes with it. As for Screenslaver, I like the concept a lot. The hypnosis is very creepy and unsettling, and leads to some great visuals. Like you said, I do think Syndrome is better; I think he might be Pixar’s best villain ever. Although I like the Screenslaver as a concept and entity, however, I don’t like Evelyn. Her reveal isn’t that surprising (and I’m sick of the surprise villains in these films anyway), and her motivation doesn’t make a whole lot of sense. The Screenslaver talks about people wanting to live vicariously through TV, but that never really connects with Evelyn’s personal vendetta against Supers. Moreover, if she wanted them to be illegal, why not stop her brother from trying to help them? It makes no sense to help him get to the verge of legalizing them and then betray everyone, and it’s a whole lot more work for her. I also don’t buy Helen’s feeling of betrayal in the end. While I liked their interactions, this woman was always suspicious, and they didn’t know each other well enough to really be friends. 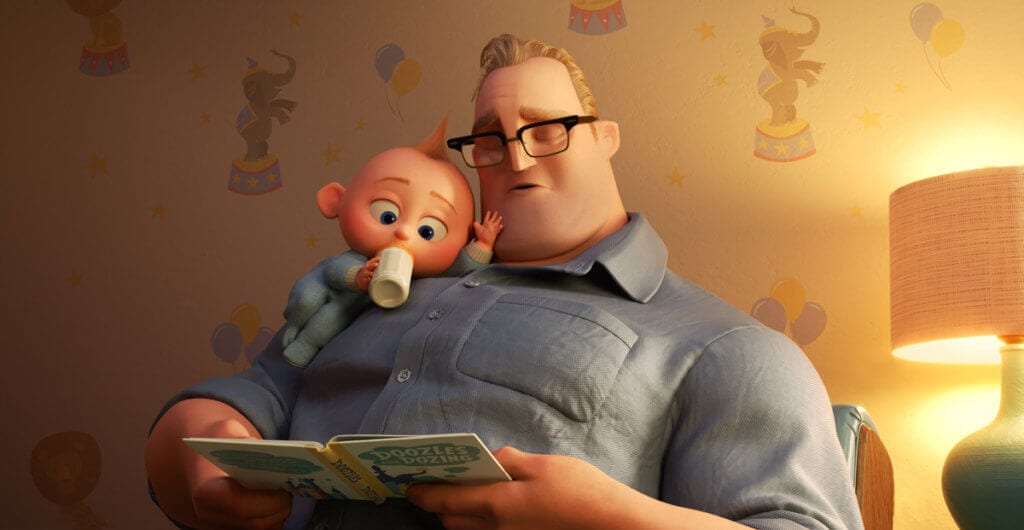 M: I do agree that the secret villain trope is tiring by now (I really hope Frozen II doesn’t go that route). I also agree that Screenslaver’s case gets weakened by the end, but I do believe Helen’s feelings of betrayal. I get the sense that after Supers went into hiding, she lived a very isolated life (or that’s how the first film paints it). Aside from Lucius, who is really her husband’s friend, she doesn’t have any contact with an adult and just lives for the kids. So I guess now that she’s out, to find another woman and be able to confide in her was a great feeling. And then, when Evelyn betrays her, it really shows that, although she has powers and she’s smart, she’s also naive about how the world works and too trusting of people. I feel it’s a little like the Anna/Hans situation in Frozen. Anna lived a very isolated and lonely life since her parents died, and her sister shut her out. So then, once a stranger showed her a little bit of kindness, she immediately fell for it. Going back to Incredibles 2, another point I really like is that they show that the kids are growing and they do it in a realistic way. I also like how, in the end, they have to save the show. They were very active in the first film, but I think the heavy lifting was done by their parents. Here, they really need to step up their game to save their parents and the world. 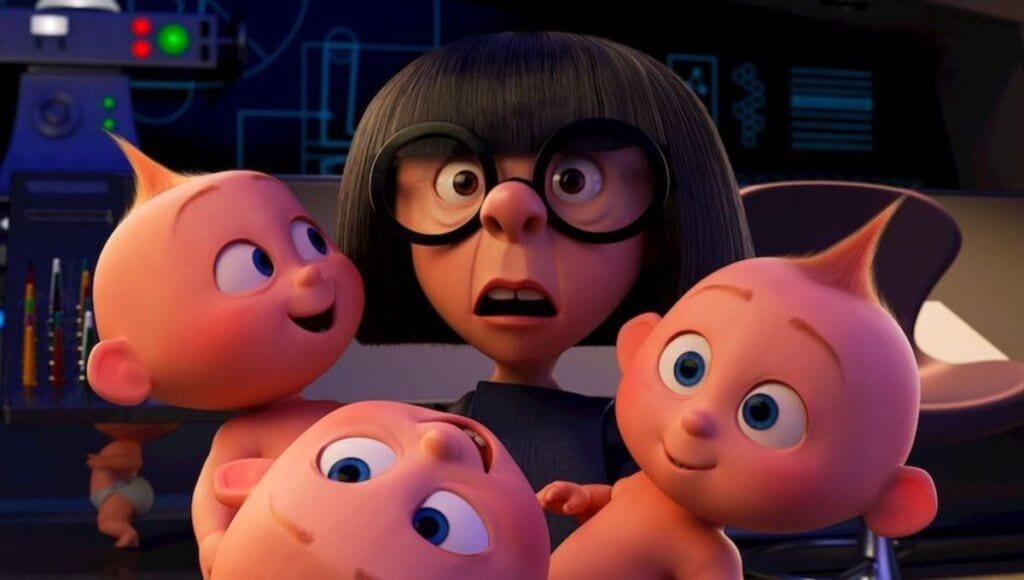 V: It’s true that in the first film, Helen doesn’t have any friends aside from Glory Days people like E and Lucius. She also doesn’t seem to have an escape like Bob going “bowling” on Wednesdays. In Frozen, they beat Anna’s naivety into the ground, where here I suppose it’s something more implicit. I agree about the way the kids use their powers in this film, and I like the scene where they have to escape from the new supers under mind control. However, Dash doesn’t really have his own story like he did in the first film, and Violet’s is a repeat. I don’t like how the opening scene with Tony is basically a shot-for-shot recreation of Kari’s experiences in “Jack-Jack Attack,” but what’s more troubling is that it restarts Violet’s relationship with him.

M: I did find that mildly annoying, but I liked that Violet remained a teenager. Like, she’s still struggling with her emotions. I didn’t mind that Dash didn’t have a solo story this time. As you said, the film already borrowed a lot from the first, and that would’ve been another repetitive storyline. Another aspect I liked was Giacchino’s score because it uses well the themes from the first movie while introducing new and exciting musical cues that enhance the story.

V: We totally agree there. I’ve said it before, but I love Michael Giacchino. As cool as it would have been for John Barry to score the first Incredibles film as intended, Giacchino has become one of my favorite composers. His work with Pixar has been a big reason why. I also like that he incorporated motifs from the Rise of the Underminer game’s soundtrack, something I certainly wasn’t expecting. I also have to say that the animation in Incredibles 2 is really breathtaking. I wish they hadn’t adjusted Dash’s face and Helen’s hair, but the textures and colors in this film are amazing.

M: Agreed. The animation, textures, lighting, and camera movement are amazing. Also, the voice cast is excellent, with Craig T. Nelson and Holly Hunter being as amazing as they were in the first film. Overall, I really like Incredibles 2. It’s not as strong as the first, but I think it has a lot of good in it, and it’s the strongest non-Toy Story sequel that Pixar has done.

V: I’m not sure what my favorite Pixar sequel is excluding the Toy Story films, but it’s not this one. It may be Cars 3 or Finding Dory. I definitely think Incredibles 2 has its strong suits, but it disappoints me more than anything else.

M: That’s all for today. What do you think of Incredibles 2? Let us know in the comments and don’t forget to come back for our last review of A Decade of Pixar for their latest film, Toy Story 4!

Incredibles 2 has beautiful animation and music and features stellar performances. However, the story and character development are a little too reminiscent of the original at times, and your mileage may vary.