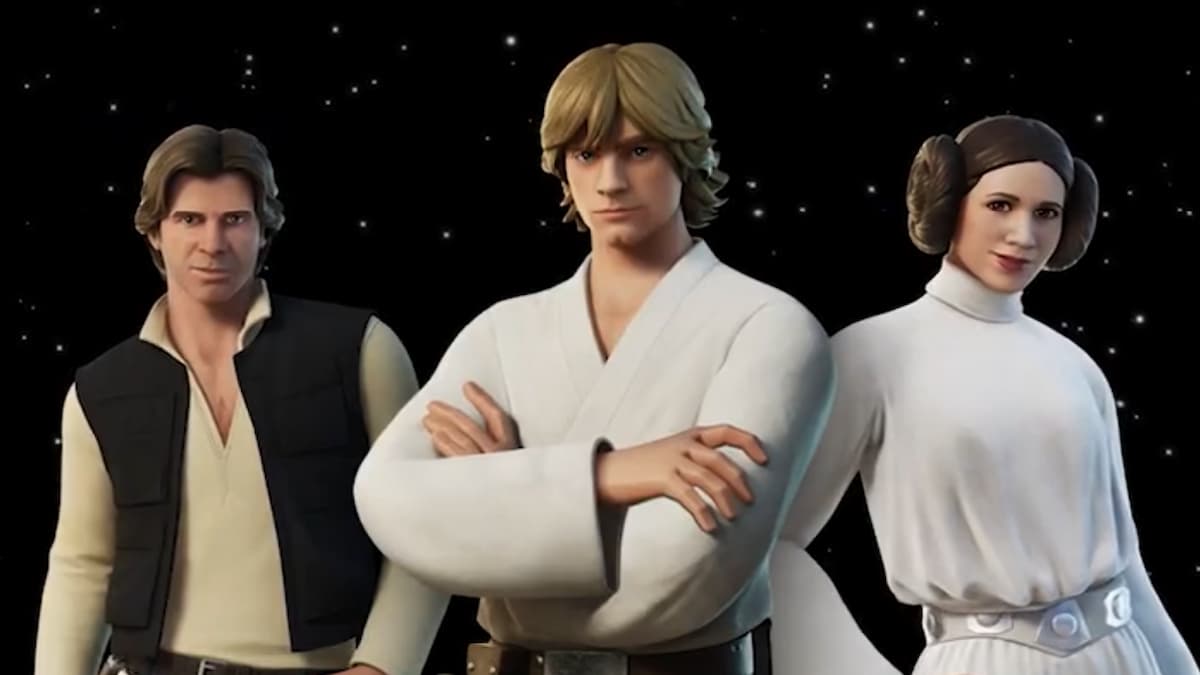 Original Trilogy fans rejoice: Fortnite Skywalker week is here! We are getting Luke, Leia, and Han Solo skins in the Shop!

So, here’s what I know based on the trailer. Both versions of Luke’s lightsaber – the blue from A New Hope and the green from Return of the Jedi – will be available as floor loot. They are also putting Vader back on the map, and if you defeat him, you’ll get his lightsaber. There will also be a modified junk rift that just might drop Luke’s X-34 landspeeder.

What I’m most excited about is what they’re calling the Original Trilogy Set. We are finally getting the Luke Skywalker, Leia Organa, and Han Solo classic looks skins in the Item Shop based on how they look in the video. The video description also states that there will be pickaxes, back blings, and a glider. For pickaxes, there will be Slugthrower Rifle, Electrostaff, and Vibro-staff. The back blings will be R2-D2 and the Millennium Falcon, and there will be an X-34 Landspeeder glider. I am ecstatic because I’ve wanted a classic white dress Leia skin for a long time, so I’ll probably be using that and R2-D2 for a while.

A long time ago in a galaxy far, far away…

Lightsabers. Blasters. Quests. A reimagined Junk Rift. And the dark side returns.

According to the article in the tweet, we have until November 8th at 9:00 AM ET to do the quests and XP using Star Wars items. We are also getting E-11 Blasters back, along with the lightsabers. I’ve also gone into the game; Luke and all his stuff is one bundle, and Han and Leia are together, or you can buy the stuff individually.

The article also talks about some other changes in the update. The Pulse Rifle has been unvaulted. If you log in between now and November 15th at 2:00 AM ET, you will unlock Chrome Punk Goals. You will then have until 12:00 AM ET on January 1st, 2023, to complete them. You will be able to unlock items tied to Chrome Punk for leveling up. Get the Chromeseed back bling for 10 levels up, Graveyard Rave loading screen for 25 levels, and Chrome Punk Outfit for 50 levels.

According to the Fortnite website article, the Horde Rush is staying until November 15th, and the Quests around it will award you a Pickle Rick Back Bling. Each quest will award XP, and if you complete eight quests, you get the back bling.

Oh, and on Halloween, Fortnite announced a team-up with Ralph Lauren Polo.

The tweet is simply announcing the new looks with a photo of what they’ll look like and a link to an article with details. The article states that these looks are based on the Polo 1992 Stadium collection, so a blast from the past for the players older than me; the only fashion I remember from that year is based on kid movies since I was 5. The looks will be in the Shop on November 5th. There will be a male and a female skin, and both have a pickaxe and back bling tied to their looks. The male skin, Stadium Hero ’92, has four versions of his look, and the female, Polo Prodigy, only has two looks. There will be a loading screen, and an emote called Victory Colors. There will be a Polo Stadium Cup on November 4th to give you a chance to win the looks before they’re in Shop.

Oh, and the Reality Tree Seeds are back!!