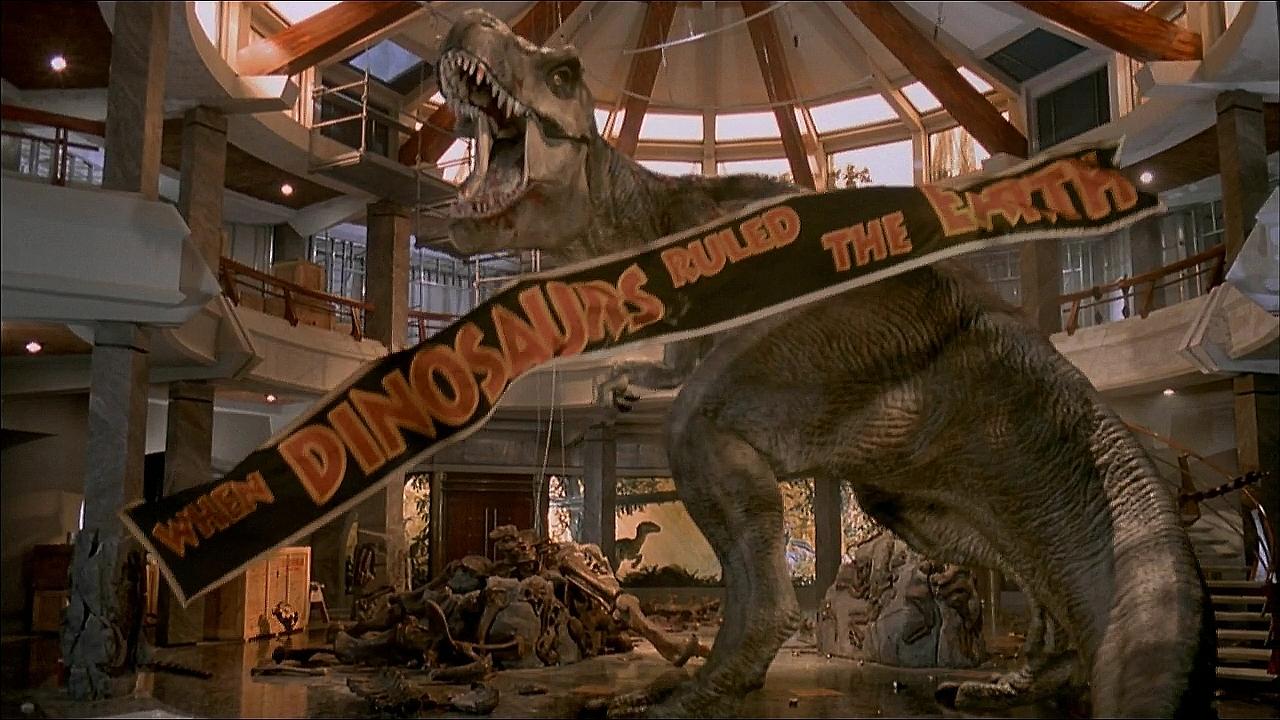 Jurassic Park rules the box office once again. With an extremely limited number of theaters open across the country – many of them drive-ins – some older movies are being shown along with films from earlier in 2020. So, for the first time since its initial release, Steven Spielberg’s 1993 blockbuster is the number one movie in the country, pulling in $517,600 over the weekend. In second place is another Spielberg classic, Jaws, which earned just a hair less, $516,300. Other classics in the top ten are Back to the Future, E.T. The Extraterrestrial, and The Goonies. Jurassic Park was also released in the most theaters at 230, more than any other in the top ten except for Trolls: World Tour, which was in 289 theaters (and scored less than half the haul of either Jurassic Park or Jaws; I’m not here to judge, but obvious things are obvious). In its original run, Jurassic Park earned $404.3 million, with another $45.3 million from a 2013 re-release.

I think there are a few reasons why movies like Jurassic Park are dominating the box office. One is that the world is on fire, and people want comfort. Even if a new film looks good, you’re still taking a chance by seeing it. That risk isn’t there with a beloved classic. Jurassic Park is also one of the great theatrical experiences in at least the last 30 or so years; it may be the best one I’ve ever had, and everyone I know who was old enough at the time has fond memories of seeing the T-Rex tear across the big screen. People who were kids at the time are adults now, many with children of their own, and it isn’t a stretch to imagine they’d want to give their sons and daughters the chance to see that movie the way it was meant to be seen. (There’s the added bonus that, unlike a certain swashbuckling space adventure, Jurassic Park hasn’t been fiddled with to an embarrassing degree.) This past weekend was also Father’s Day weekend; do you think the nation’s dads would rather revisit classic Spielberg films or check out Trolls: World Tour? At any rate, I’m glad to see some of these wonderful movies proving their staying power, and I’d love to see this continue once the whole country is allowed to go to the theater again. Why not re-release a classic every month, and outside of those terrific Fandom Events? There are many old ones that I’ve always wanted to see in a theater; they could spend two years releasing a new James Bond movie every month, or some of the great horror films around Halloween. I don’t see this happening, though; the studios won’t want any business being taken away from their expensive new releases that need to make a billion dollars to break even, and as they’re learning now (albeit without any tentpole movies released), moviegoers are eager to see the classics. Now, I want to see what happens if some brave theater shows Gone with the Wind.

Does it please you to see Jurassic Park at the top of the box office again? Have you been able to visit any open theaters? Will a re-release of Battlefield Earth buck this trend? Let us know in the comments and stick around Geeks + Gamers for more movie news!

I wonder how many kids are discovering it for the first time ever because of these conditions.

At leas that’ll be one silver lining. I’d hate to think an entire generation’s first impression of that franchise is Jurassic World.

We live in a world where Playmobil are releasing and marketing toys for Ghostbusters II like it’s 1989. Anything is possible.

That’s the kind of world I want to live in.

Such a glorious film, the visual effects still hold up today.

I remember having the SEGA CD videogame with the wearable rumbling pack that fitted like a vest, one of those films that gave you the feeling of wonder and awe.

I didn’t have SEGA CD, but I played the one for Genesis. That was fun, and it looked good for the time.

I remember when this movie came out. Parents bought it for me on VHS and as soon as I would finish it you’d hear the fast forward rewind zip and restart the movie. Burned out the first tape and parent bought me a second one.

For people who grew up when we did, it’s seminal. I was in awe the first time I saw it, and it hasn’t lost an ounce of its power since.

I don’t remember for certain but I seem to remember that Jurassic Park came out on VHS like a year after it was released in theaters maybe a little longer than that.

I don’t remember, but it’s possible. Things took longer to reach video back then. The current time-frame was unheard of.