Independent comic books are on the rise of late, a response to the perceived deficiencies in the mainstream comics industry. Former DC and Marvel artist Ethan van Sciver has found great success with Cyberfrog: Bloodhoney, his revival of his Cyberfrog character, and Richard C. Meyer of Diversity & Comics YouTube fame is on schedule to release his crowd-funded graphic novel Jawbreakers — Lost Souls in August. Seizing on this momentum is Constant Hustle Comics, an independent company dedicated to “changing the status quo of the faces of superheroes and how their stories are told.”

Starting with their first book, The Last Line — about a grieving family who become superheroes to avenge their lost matriarch — Constant Hustle Comics hopes not only to introduce a more diverse stable of heroes to readers, but to do so “in a non-stereotypical manner that doesn’t further exploit or perpetuate any myths or stereotypes.” The team will be adopting a “story first” philosophy for their comics, creating some stories that “pull from current events” and some that are wholly original. Their mission statement is below:

Our need at Constant Hustle Comics is to not only bring more heroes of color, different genders and sexual orientations to the comic-reading and future-comic-reading masses, both in reality-based and hyper-reality-based comic lines, but to bring them in a non-stereotypical manner that doesn’t further exploit or perpetuate any myths or stereotypes.

We believe that minorities of any type aren’t just built to be sidekicks or comic relief, not to be marginalized or minimized in any way. We believe that today’s society shows us that multiple comic lines can be built around this very idea. Just like there is more than one way to tell a story, there’s more than one type of hero to be in it.

Our vision on how to deliver this is to become a collaborative “story first” type of comic studio that weaves inclusive stories, some that pull from current events and some completely of our own design. We will utilize the 22 rules of storytelling used by PIXAR, as well as whatever tools we see fit. We will have story meetings in which we will present story ideas from all in attendance and plan future editions of our particular lines.

We will approach the look of our books with a David Fincher type of attitude. “My process is the process of limiting: it’s the blinder’s you put on. What I try to do is, instead of thinking of everything that I’m going to do, is trying to figure out the rules to determine the things that I’m not going to do, the things I’m not going to be able to do. You have to embrace your limitations, not only as an individual but also as your budget, what it can do.” We will utilize all the space in a frame for the sole purpose of benefiting the moving of the story.

We believe if the audience is engaged intellectually and sees something in our characters that they can relate to, then we have just built our fanbase by another reader. We have no issue in this because we want them all to be loyal readers and engaged fans. We know we can provide them the content they crave.

The infrastructure from which this will be brought to the masses is built through the collaborative efforts of all team members and a grassroots approach to spreading the word on our need and vision for the future of comics.

This means we will bring our message to local and not-so-local comic cons and offer mini-issues on Free Comic Book Day or whatever venue and activity can provide us a stage to showcase our stories and lines. Also, we will approach local-to-the-team comic stores to see if we can sell our comics at their stores.

We have writers, artists and editors as part of the team and are adding new members when we can, as well as incorporating a plan to print our own books and promo material. This will allow us to be nimble and effective in our ability to turn out a quality product with little need of outside assistance.

The more nimble and self-reliant we are, the more effective we are and the more stories we can tell. 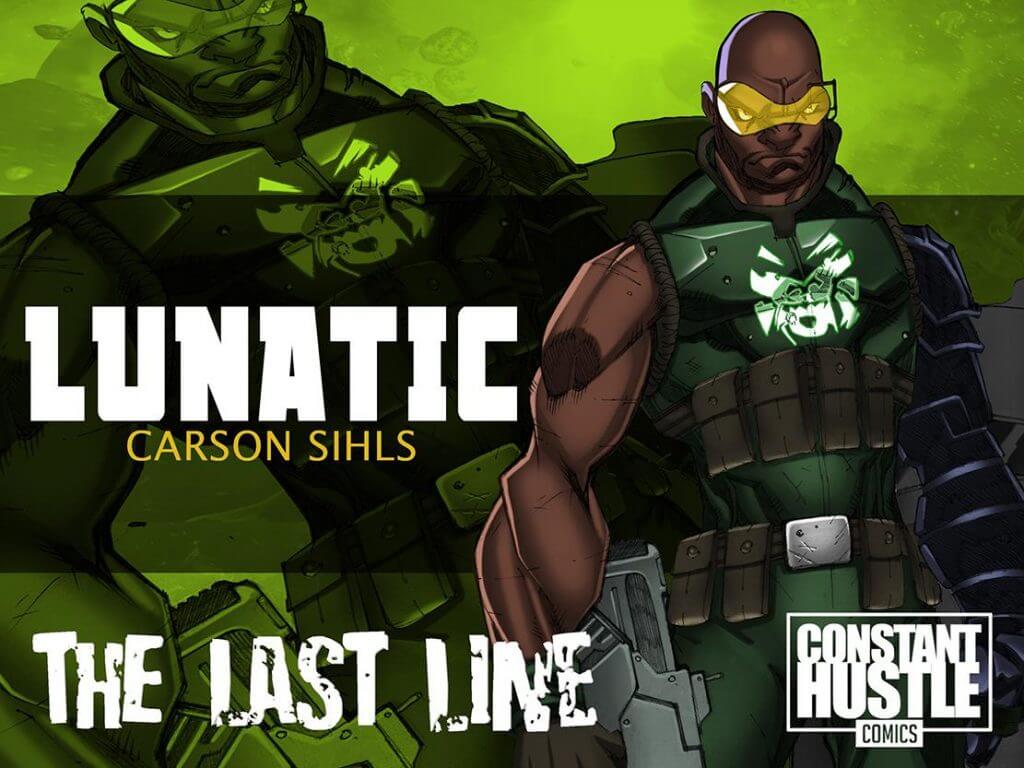 This all sounds promising. Taking a story-based approach is the right way to go, and their invoking Fincher and Pixar to that end is very encouraging (using Fincher’s notions on storytelling on film to influence how they draw panels is particularly inspired) — they understand that their higher-minded ideas will work best when grounded in the characters and their adventures. I also like the idea of a family electing to be superheroes rather than being forced into it — a sort of inverse of the Fantastic Four. With creators as driven as the team at Constant Hustle Comics clearly are, The Last Line could be something special.

And that drive is key. Van Sciver, Meyer and Constant Hustle have very different critiques of the comics industry and goals with their books, but what unites them is their passion, and that is what’s so wonderful about the independent comics scene; anyone with the will and dedication can try their hand at the art form they love. And to their great credit, the fans are stepping up, paying for the type of content they want and making alternative stories possible. Let’s hope Constant Hustle can garner the same success as their fellow creators.