10 years and 18 movies later, Marvel Studios has done what no other movie franchise in history has been able to pull off successfully: a series of films with a disparate group of characters, continuously linked together through different stories, each film leading to one gigantic event. To comic book fans, this way of storytelling is no stranger; however, for a movie franchise to pull off such a strategy was once only possible in the imagination; now it’s a reality. So what does Marvel Studios have to show? A movie that will leave your jaw on the floor, and quite possibly the best comic book movie you’ve ever seen.

Avengers: Infinity War is the climax of the Marvel Cinematic Universe to date; Marvel Studios not only delivers on a decade of promise, but goes above and beyond to make a tremendous film. Infinity War takes us to places all over the world and beyond the stars and is executed perfectly, with every piece fitting exactly into place. Featuring over twenty characters including all the Avengers and the Guardians of the Galaxy, dividing so much screen time between the cast is recognizably difficulty for any director, but Joe and Anthony Russo makes it look like child’s play.  Every character in this film receives a fair amount of screen time, some more than others, but no one more than Josh Brolin’s Thanos. 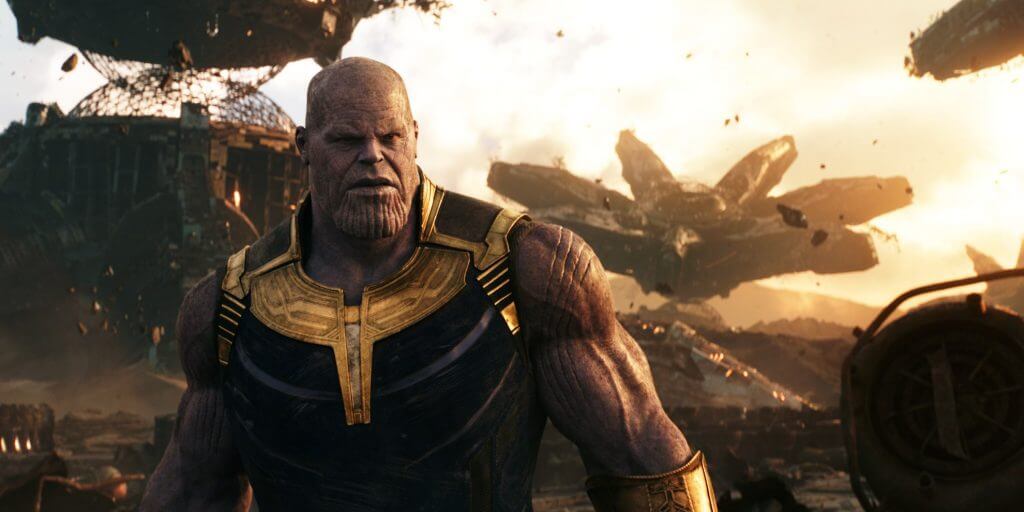 Thanos is everything he was promised to be; he makes Michael B Jordan’s Killmonger look like he was a teenager having a tantrum. Josh Brolin’s performance is simply exceptional. There are many layers to the character, some of which are unexpected, but the defining thing about Thanos is the level of wickedness that lives within him. Thanos makes his presence felt from start to finish, cementing himself as not only Marvel Studios’ best villain thus far, but one of the best villains we’ve seen on screen, period.

The chemistry among the cast is phenomenal and provides great moments throughout. Whether it’s in a scene with conversation, battles, or devastation, the cast is on point and the audience feels every laugh, shock and heart-breaking moment. Stand-outs were Zoe Saldana as Gamora, Paul Bettany as Vision and Elizabeth Olsen as Scarlet Witch; these three do such an exceptional job portraying their characters’ emotions that you cannot help but be invested in their parts of the story.

The plot is something we knew – Thanos decides to go after the Infinity Stones in order to restore his own version of balance in the universe and gain ultimate power – what I wasn’t expecting is how much influence the comic books have on the film. Make no mistake about it, this is not your typical “superhero” movie; this is a comic book movie. Marvel Studios is brilliant when adapting stories and characters; Captain America: Civil War was an example of this, although, in my opinion, it doesn’t hold a flame to the Marvel Comics series. However, Avengers: Infinity War is a hybrid of a few different Marvel stories: The Thanos Quest, Infinity Gauntlet, Infinity Vol 1 and Infinity Vol 2. Taking source material from these comic book arcs and combining different aspects from each, Marvel Studios is able to create an extraordinary story of their own for Infinity War.

Avengers: Infinity War is unlike anything we’ve seen before in the film industry. It left me absolutely stunned and with my heart on the floor; yet, at the same time, I was overjoyed as a comic book fan. This is not, by any means, me being biased; I’m more than willing to admit that Marvel Studios has released some bad movies, like Iron Man 2 or Thor: The Dark World. But I do not have a single complaint about Avengers: Infinity War. Parents be warned: this movie may leave your kids in tears. Movie fans, you will be shocked, and comic book fans, rejoice. Infinity War brings the Marvel Cinematic Universe into a much darker place, a new side of the MCU that we are just on the brink of exploring, and the future looks promising.  As I’ve said to friends for months leading up to this film, nothing can prepare you. No one is ready for Avengers: Infinity War.

As I've said to friends for months leading up to this film, nothing can prepare you. No one is ready for Avengers: Infinity War. A movie that will leave your jaw on the floor, and quite possibly, the best comic book movie you've ever seen.