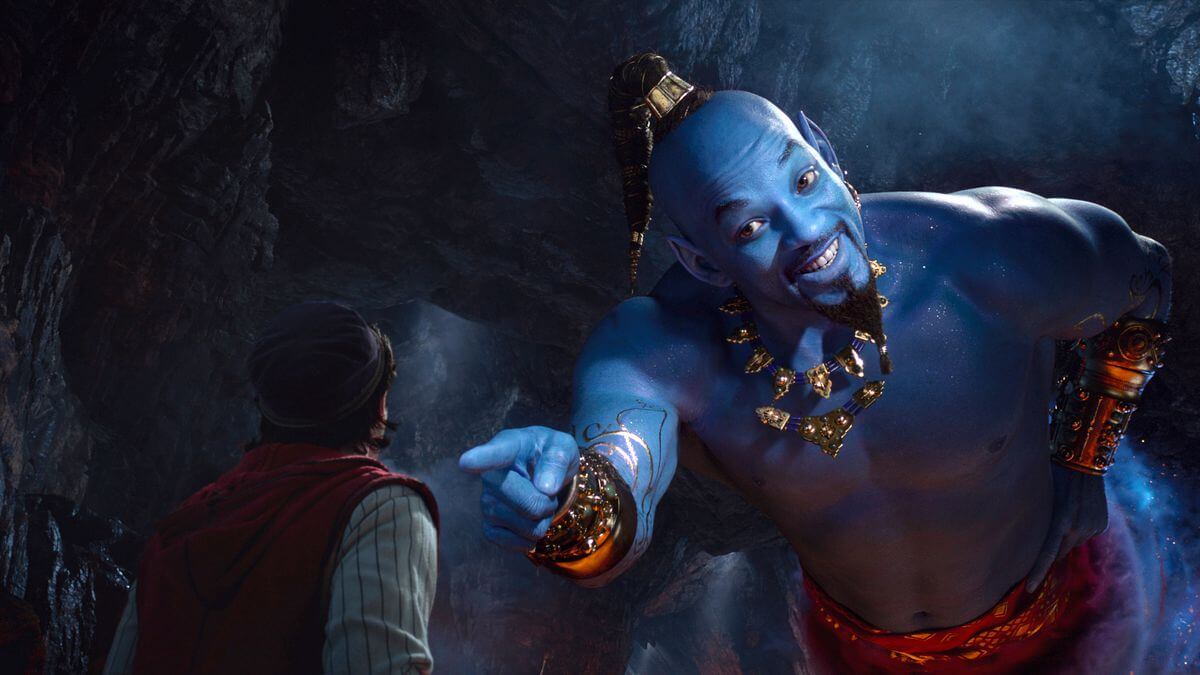 The Disney live-action remake train continues chugging steadily along as their newest offering, Aladdin, hits theaters. I’ve thought all the ads for this film and most creative decisions related to it have been terrible, but I’m always in favor of giving a movie the chance to speak for itself. I’m also a Disney fan, and I like to see as many of their movies on the big screen as I can. My husband is out of town, so this time I went with my friend who happens to work for a movie theater, and I’m so glad because this film really isn’t worth the price of admission in my book. Let’s take an in-depth look here.

If you’ve seen the animated Aladdin, you know the basic plot of the remake. There is the odd change here or there, which we’ll get to in a moment. In short, Aladdin is a lowly thief in the fictional Middle Eastern kingdom of Agrabah. He meets Princess Jasmine disguised as a commoner in the marketplace, and they have an instant connection. Although they come from different stations in life, Aladdin gets his chance to impress the Princess when he comes into possession of a genie’s magic lamp. This causes problems for the Sultan’s advisor Jafar, who initially sent Aladdin to fetch the lamp so he could make himself Sultan. Will the thief with a heart of gold steal the princess’ heart, and will he tell her the truth about who he really is?

The marketing for this film reminded me a lot of 2017’s Beauty and the Beast remake, and that’s not a good sign. That movie made some adjustments, like giving the Beast a tragic backstory and explaining what happened to Belle’s mom, but for the most part, it was a soulless, shot-for-shot copied cash grab. Even the additions they included didn’t really add to the story so much as bog it down. Regardless, as I said, I wanted to give Aladdin a fair shot, and I got to see it for free anyway. Aladdin isn’t quite an exact recreation of the 1992 animated classic, but much like Beauty and the Beast, it’s pretty close at times. Musical numbers are as close to the animated film as they realistically could be, and the iconic moments are there as well, like Aladdin reaching for the lamp in the Cave of Wonders. The dancing and singing actually feel slowed-down, while some action sequences feel like they’re on fast-forward, which can be jarring and distracting. 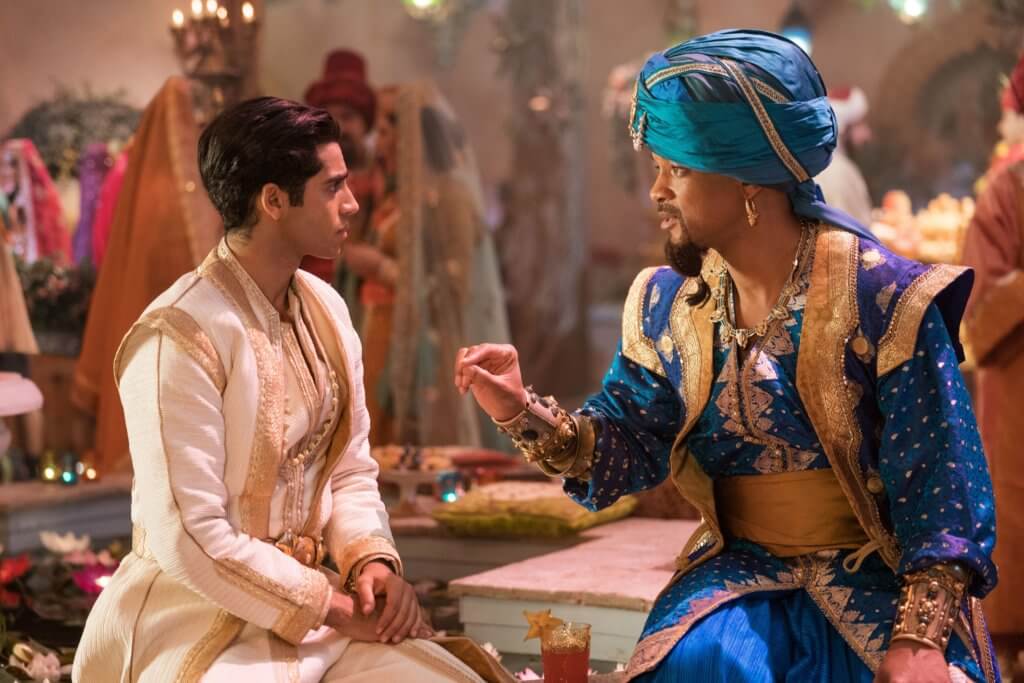 The acting in this film ranges from laughably bad to pretty decent. I had never heard of Mena Massoud before he was cast as Aladdin, but based on this performance, I actually am impressed with him. He does a great job at embodying the energy and sweetness of the animated character, and he brings a couple of new tricks into the game as well. One of the trailers for the film showed Aladdin being pushed towards Jasmine by the Genie. In the movie, this is followed by more manipulations from the Genie to impress Princess Jasmine. While it may have been a stunt double dancing (I’m not sure, and research has proven unhelpful), Massoud still uses facial expressions to convince us that he’s a puppet being controlled. His singing isn’t bad either, and at times he really sounds like Brad Kane, Aladdin’s singing voice from the animated film. Naomi Scott does a pretty good job as Jasmine, too; she exudes a passion when speaking of her people and how she feels trapped. However, I didn’t think the chemistry was very good between these two, though it’s still better than that between the two leads in the Beauty and the Beast remake. Nasim Pedrad of SNL fame portrays Jasmine’s new friend Dahlia, and this character is every bit as pointless as we expected. She does an okay job and gets a couple of humorous line deliveries, but it’s just another superfluous addition to a story that was fine before.

Will Smith being cast as the Genie has been one of the hottest topics surrounding this film ever since it was announced, and honestly, it wasn’t worth the controversy. He’s okay in the role and gets a couple of funny jokes, but he’s neither good enough nor bad enough to justify this whirlwind. Of course, the real reason this casting announcement caused waves is that people didn’t want to see the late Robin Williams’ iconic character recast, and nobody would ever truly fill his shoes. They play this version of the Genie a little bit calmer while still including the odd reference here and there, and that’s probably the best we could have hoped for. The most memorable performance is given by Marwan Kenzari as Jafar, and not in a good way. I don’t understand the choices made with this character, as I couldn’t take him seriously during the film. He has no dramatic presence and isn’t intimidating in the slightest. They give him a backstory in all of one line, somewhat reminiscent of Gaston suddenly being a war hero (seriously, this movie is a LOT like the BatB remake). This backstory rarely plays into the plot and adds nothing to the film overall. The reason this character and performance sticks in the mind is the outlandishly loud take Kenzari offers on the classic Disney villain, and here I mean loud both literally and figuratively. When something goes wrong for Jafar, he literally looks up and screams, “AAAAAH!” and it’s so ridiculous you just have to laugh. I wondered how anyone could take this character seriously as a threat as my friend and I died laughing at him. Jafar is simultaneously the best and worst part of this film because he’s so over-the-top I couldn’t look away. Abu, Iago, and the Carpet barely register in the movie at all, despite being in some of the funniest bits in the animated film. I almost wondered why they didn’t simply cut them like Timothy in the Dumbo remake; after all, only Carpet really serves the story in a meaningful way in this version. 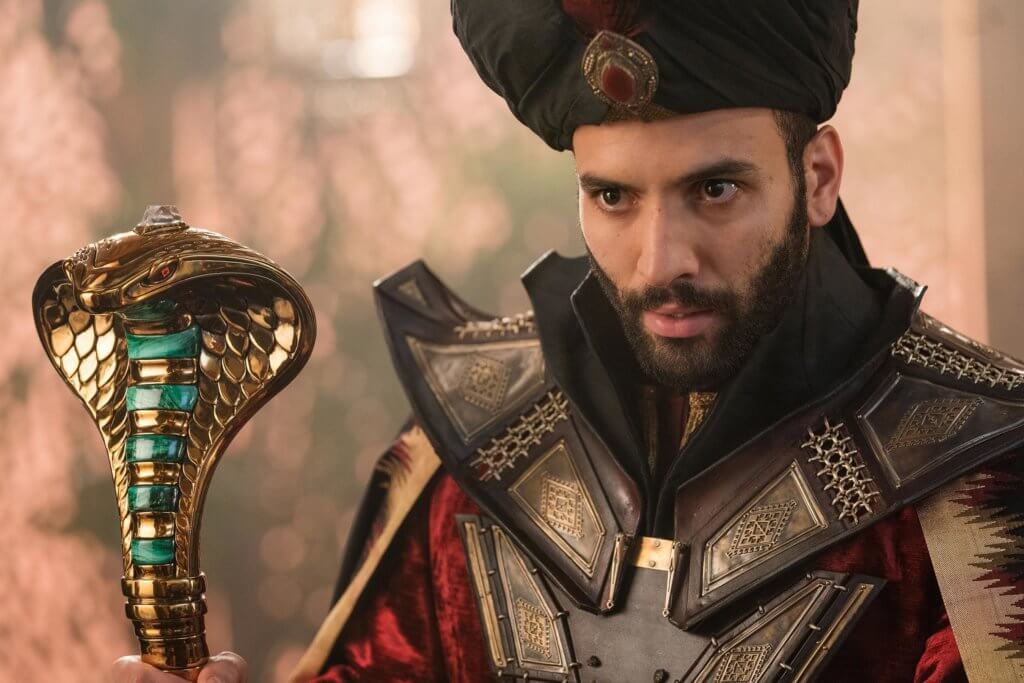 Naomi Scott is certainly beautiful enough to be Princess Jasmine, and as I mentioned, she’s not half bad in the role. However, I do have issues with her from a writing perspective. Unlike Aladdin, she’s essentially a completely different character than her animated predecessor. To a lesser extent, Jafar and arguably the Genie fall into this category. In itself, this concept doesn’t bother me; in fact, I think it could be a great idea. Jasmine is one of my favorite Disney characters, and as a child she was my idol, but we already have that character and that movie. Making this Jasmine a new and unique rendition could be a great thing, and really make the new Aladdin stand out. However, they basically make this Jasmine a poster-child for feminism, something the original was already playing at (“I am not a prize to be won!”). It’s no secret that I don’t like blunt displays of girl power that don’t serve the story, and even if it does benefit the story, I’d like it toned down a bit. I have nothing against women; heck, I am one! But I don’t like having modern political ideals shoved down my throat, especially not in a movie set a long time ago in a faraway land. Giving Jasmine this passion for her people was an interesting choice, but I don’t like her drive to become Sultan. It feels politically motivated and inorganic, and again, in a film like this, I find it distracting. They even play up Jafar’s male chauvinism, again, something that was there to a smaller degree in the animated Aladdin, so that Jasmine can stand against him. I’m really of two minds here, as Scott does sell the performance, and her speech near the end is really effective. But I feel like this character arc could have done with some subtlety, and, well, an arc. Jasmine doesn’t learn anything in this film; rather, the men learn from her. Great. They also introduce a backstory for Jasmine’s mother being out of the picture. This adds nothing to the movie, and Jafar’s desire to invade the late Queen’s country is never explained. It also doesn’t feel like a real threat, as we don’t know anything about that kingdom or its people. 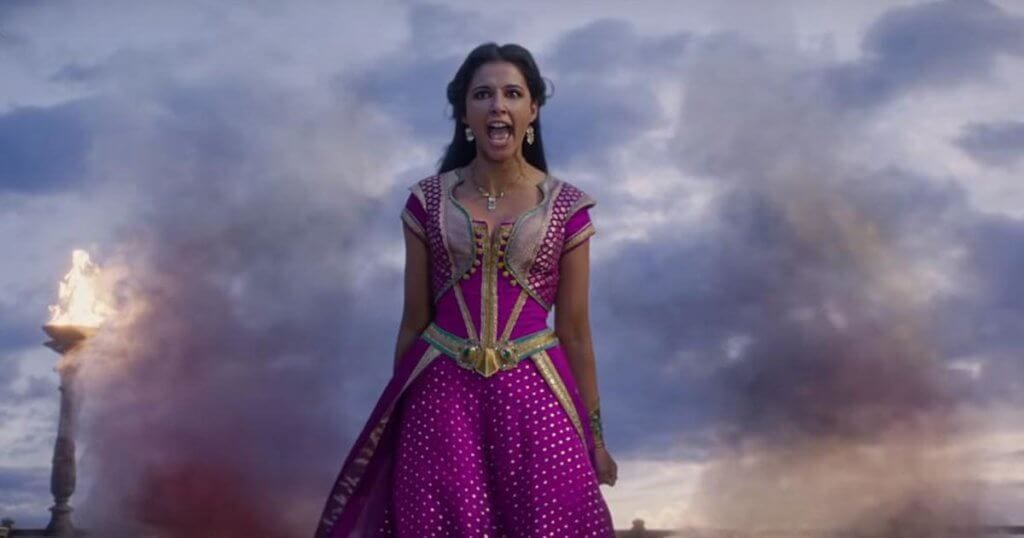 Jasmine has a new song for this film, “Speechless,” composed by Benj Pasek and Justin Paul (La La Land, The Greatest Showman). This actually makes a lot of sense, as the sound of this song does not go well with the setting, or even with the other songs (which came from the animated film originally). It’s a real shame Alan Menken didn’t write a song for Jasmine; I’m convinced the lyrics would have been less on-the-nose (and again, they’re very modern feminist) and the overall sound would mesh better with the other songs and score. Scott does an excellent job at singing “Speechless,” but this came as no surprise to me having seen her in Lemonade Mouth, a terrible movie where her vocal abilities nonetheless get to shine. In the Genie’s musical numbers, they break out in beatboxing with Smith rapping, and despite the fact that he has talent and it’s not “bad,” it just doesn’t work in this film. It doesn’t belong here. This reminded me very much of the use of Gospel music in Hercules or Broadway-pop in Frozen; it’s not that it’s bad music (well, some in Hercules is pretty bad), but it’s not natural to the setting, and that takes the audience out of the experience. The costumes in this film are incredible, with Scott’s Jasmine donning several gorgeous outfits that are surely destined to be marketed as Halloween costumes and dolls for kids. This film’s framing and editing are very strange. They speed up or slow down for seemingly no reason, such as going into slow motion when Aladdin falls or speeding up when he and Jasmine are evading the guards. The “Speechless” number is shot like a music video, with the camera panning around Jasmine as her friends, mentors, and enemies fade away. I understand the intent here, but it doesn’t work; it just feels like a Disney Channel music video, which is also what this song sounds like.

Overall, Aladdin is a mess, if not an unwatchable one. The acting is spotty, the music full of unnecessary flourishes and distracting additions, and the writing inconsistent and questionable. Aladdin can’t seem to decide if it wants to copy the original animated movie or spread its wings and experiment, so it feels simultaneously held back by and unfaithful to its source material. Honestly, I wish they’d again go the Cinderella route and just tell a completely different version of the story. As a Disney fan and movie goer in general, these recreations are annoying and, at times, insulting. If you do see Aladdin, I’d suggest you do like some women in front of us and bring beer.

Aladdin is a mixed bag, but overall it has more bad than good. This is a film that doesn't know if it wants to be a remake or a retelling, and as such, fails at both endeavors.