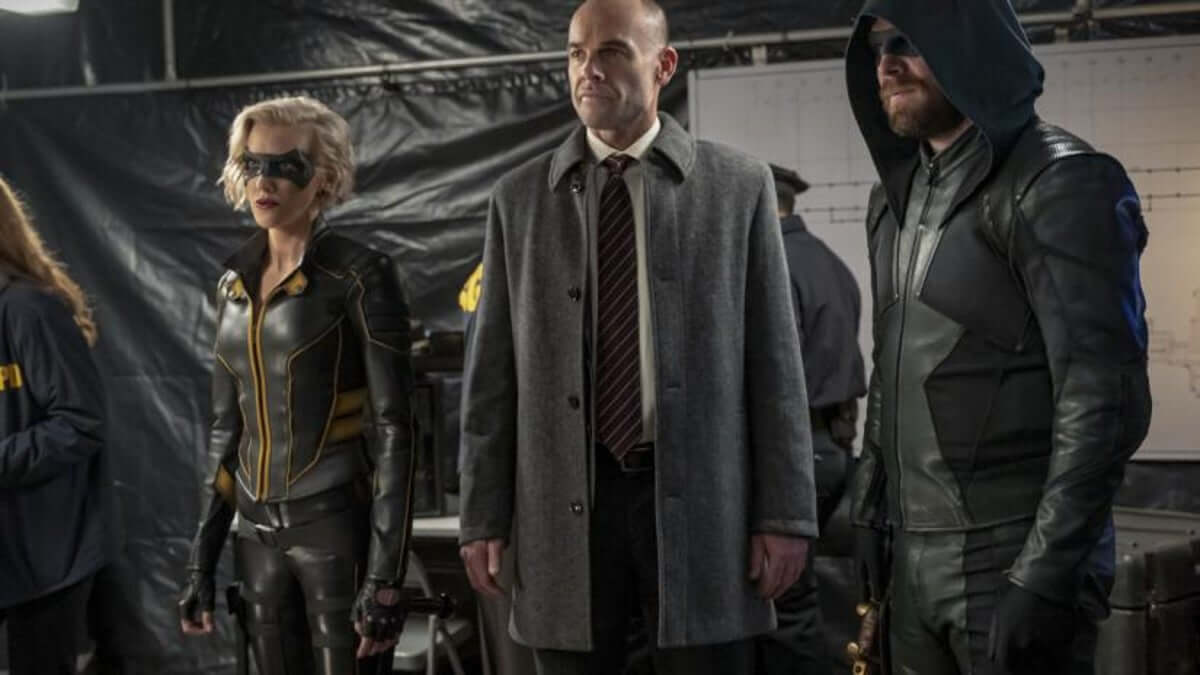 We’re officially in the second half of Arrow’s final season. Overall, the season has been pretty good, so when I found out that David Ramsey, who portrays Diggle on the show, would directing “Reset” – which would see the return of Paul Blackthorne’s Quentin Lance – I was excited to see what the episode, scripted by Onalee Hunter Hughes and Maya Houston, would bring us.

“Reset” opens with Oliver waking up in his Star City apartment as his children and Connor walk in, arguing about whether the Big Belly Burgers are better in the present than they are in the future. Oliver quickly learns from them that the incident on the roof was two days ago and that the Monitor is no longer a threat. This confuses Oliver, of course, but he doesn’t have time to figure things out, as he is late for a fundraiser in support of, as an underutilized Rene later explains, the Star City Vigilante Pilot Program, where Oliver and the mayor are to give a joint statement. He goes to a mysteriously-rebuilt Palmer Tech where, amid a dorky police officer and a clumsy waitress, Mayor Quentin Lance asks Oliver about the changes he wants to make to the speech that they will give together to help ensure the future of the Vigilante Task Force. The sight of Lance shocks Oliver, and after a few questions, he discovers that, rather than dying at the hands of Diaz in the season 6 finale, Lance survived by the skin of his teeth, then continued his mayoral duties. Before Oliver can figure out what’s going on, everyone is alerted to a bomb, which culminates in an explosion that resets everything back to the beginning of the episode. This forces Oliver and Laurel – who is also stuck in the time loop as a result of being one of “the two people who royally pissed off the Monitor the most,” as Laurel so eloquently puts it – to figure out how to stop the bomb and save Quentin, the latter’s death being the true reset point.

From there, “Reset” settles into the Groundhog Day/Edge of Tomorrow formula, both films referenced throughout the episode by Lance and Laurel, respectively. While there are elements that seem a bit hokey each time Oliver and Laurel try to save Lance, it is increasingly tragic, not only for our heroes but also for the viewers. Just when you think Oliver has figured out the source of the bomb threat via a criminal by the name of Anderson White, it only sends them running in circles, with Oliver at one point saying, “Who knows how deep the rabbit hole goes?” Laurel eventually understands the purpose of her role in the time loop, which is to be able to say a proper goodbye to Lance. Oliver initially refuses to give in, something that Lance tries to get him to do. In many ways, as much as “Reset” is about Lance cheating death, it also is a referendum on Oliver’s ability to do the same throughout the series.  All season, everyone around Oliver, from Diggle to Thea, has reminded Oliver of this fact. As Lyla was sure to tell him, there is no outrunning the Crisis, and he must accept his fate – a lesson that, once learned, sends the team out of the time loop and back to Lian Yu for a final mission prior to the Crisis. 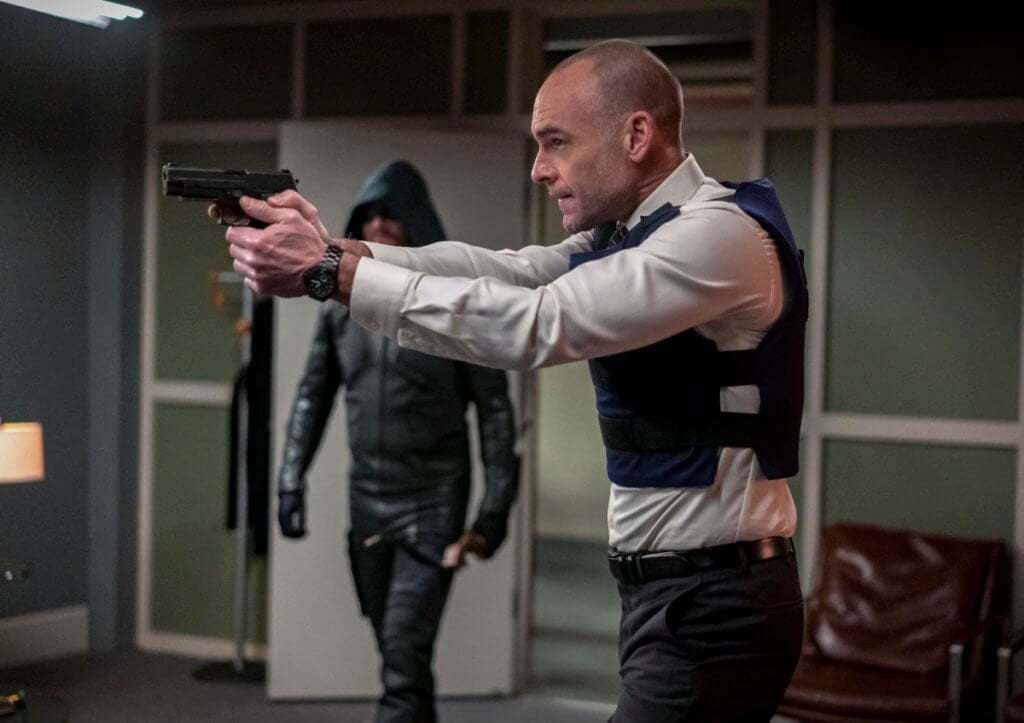 If there’s one overarching problem with “Reset,” it’s Lyla’s role in this episode. From the moment she comes on screen, the viewer knows how her part is going to play out, and while her betrayal should mean something as a longstanding fixture on the show, the predictability leaves it feeling just as hollow as her justification (protecting my family) for stabbing them in the back. It is ultimately a disservice to actress Audrey Marie Anderson. That being said, the rest of the performances are exemplary, and a reminder of the fact that even a paint-by-numbers plot can be made great by fantastic actors. I particularly like that, rather than simply revert to being fatalistic, Oliver seems to almost look forward to ensuring his children have a world to grow up in, even if he won’t be around to see them succeed for much longer. Katie Cassidy is also good, encapsulating her arc on the show, thus allowing her to transition to the upcoming spinoff with something of a clean slate. Special mention must also go to Paul Blackthorne. I’ve been following Blackthorne since his work on the underrated Jim Butcher Syfy adaptation The Dresden Files. I was sad to see him leave Arrow in season 6, so I was happy to hear that he’d been coming back for multiple episodes this season. While he may have been underutilized over the years, this was his best performance on the show as he guided Oliver toward accepting his fate. I can’t wait to see where Lance will go in his final appearances.

The story by writers Hughes and Houston is serviceable; I just wish they’d thought outside the box a bit more. Thankfully, they were able to ensure that, despite Lila’s predictable role, the big moments in “Reset” land very well. With this being the last season, it makes sense that some of the actors would try to step behind the camera, either for the first or last time. Katie Cassidy did really well with her directorial debut, so I was curious to see how Ramsey would do in his second outing as a director after his work on the season 7 episode “Past Sins.” I’m pleased to say that this was definitely a home run. The amount of prep work that goes into directing the various network shows is tremendous, with Jensen Ackles once stating how grateful he was to only work for three days in front of the camera on an episode he had been directing. It makes sense, then, that Diggle’s role in “Reset” is minimized so that he could deliver his best as a director. I’m glad it paid off, and hopefully, both he and Cassidy continue to direct in the Arrowverse, much in the same way Roxann Dawson and Robert Duncan McNeill did in the Star Trek franchise. 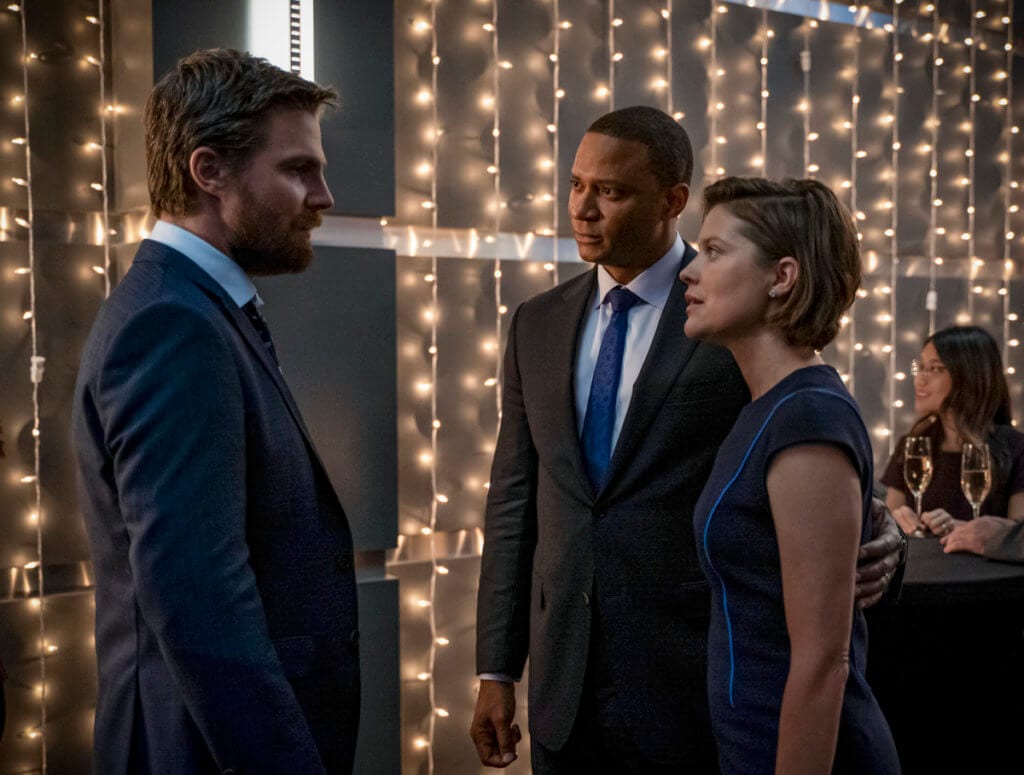 Despite the routine premise and Lyla’s predictable role, “Reset” is a serviceable episode of the show, anchored by great performances, particularly Paul Blackthorne’s.  With Team Arrow back on Lian Yu, I can’t wait to see what Oliver’s final pre-Crisis mission brings in next week’s episode, “Purgatory.”

Despite the routine premise and Lyla’s predictable role, "Reset" is a serviceable episode of the show, anchored by great performances, particularly Paul Blackthorne's.