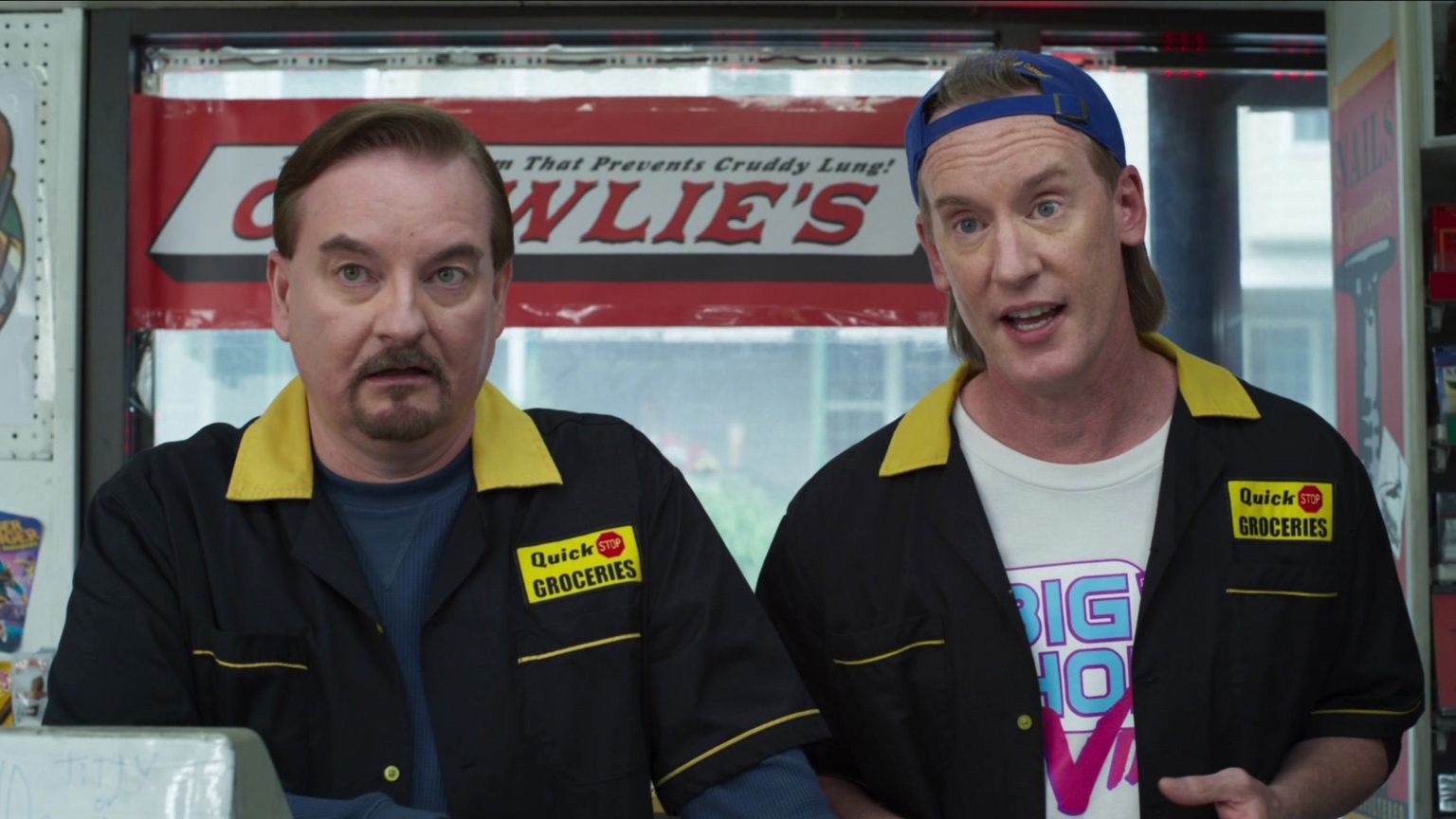 Clerks III is probably Kevin Smith’s most introspective movie. This isn’t the first time he’s looked inward through his films; his early works were about him growing in his attitude towards relationships, Dogma was born of his struggles with his faith, and the recent Jay and Silent Bob Reboot was rooted in his experiences with fatherhood. The Clerks movies have all felt like markers for each stage of Smith’s life – by design in the sequels’ cases, but also partly because there are now three of them, each seemingly strategically placed throughout the View Askewniverse – with Dante and Randal acting as the avatars for his advancing years and new perspectives. Clerks III is his statement on getting older and looking back, realizing that your days are numbered, and deciding what that means to you.

Dante and Randal (Brian O’Halloran and Jeff Anderson), now owners of the Quick Stop (I won’t spoil what’s become of RST Video), continue to drift through life in their advancing age. One day, Randal has a heart attack and almost dies; when he pulls through, he decides to make a movie about his and Dante’s experiences as clerks.

I’m tiptoeing around the plot of Clerks III because there are story elements revealed even before the opening credits are over that you shouldn’t know before you see it. But the stuff from the trailer and Smith’s various interviews and updates is enough. This is a story that comes from Smith’s real-life brush with death and what I imagine were his feelings, worries, doubts, and drives upon surviving. If you’re a fan to the degree that his fans tend to be fans, you’ll know all or most of this and will be able to spot the references and allusions to Smith’s life that permeate Clerks III. There are callbacks not just to Smith’s medical trouble but to his filmmaking history, including the making of Clerks and his subsequent movies.

This kind of meta-storytelling could have collapsed into a self-indulgent mess, but what makes Clerks III work – and it works great – is that Smith tailors his experiences to fit Dante and Randal’s characters and arcs. The guys we’ve known since 1994 (or whenever you caught up with Smith’s oeuvre – for me, it was 1999, after I saw Dogma in theaters and sought out his previous work) are not magically transformed into Kevin Smith stand-ins; they’re Dante and Randal still, reacting to Smith’s roadblocks their own way. Their story goes back to the beginning in that they’re making a movie based on their introduction to the world, but this isn’t a retread; it’s a reminiscence, a look back at a life lived. Whether that life was lived well is open for debate. 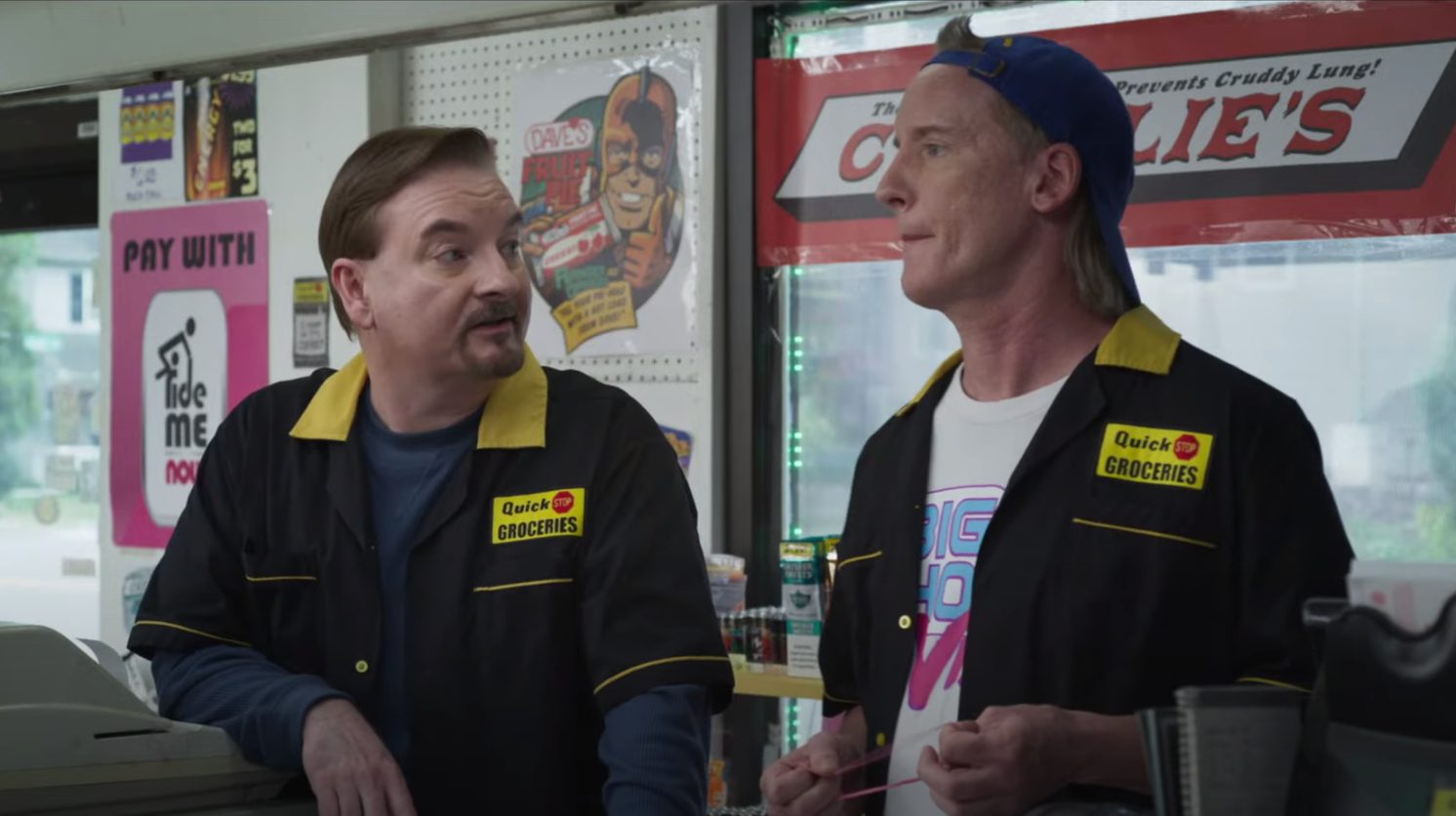 In the humor department, Clerks III is a success too. I laughed consistently throughout the movie, and each character has a specific kind of humor. Randal is Randal, sarcastic and biting, referencing every geek property he can think of while acting above everyone and everything he sees. But Dante is subtler and more thoughtful, having some excellent lines that are less vulgar or referential but elicit the same big laughs. Jay and Silent Bob are wackier, with plenty of off-the-wall goofiness in their relatively limited screen time. It’s all funny, and, to dispel any fears, it not only doesn’t go woke but mocks wokeness at several points.

The acting is just right, especially from Brian O’Halloran and Jeff Anderson. They’ve got their biggest dramatic scenes yet in Clerks III, and they rise to the challenge. O’Halloran plays Dante as a sad man who’s given up his hopes of a meaningful life, and even in the lighter moments when he’s goofing off with Randal or marveling at the weirdness of Jay and Silent Bob, O’Halloran gives Dante a hangdog weariness and despair that can be masked but doesn’t go away. Juxtaposed with that is Randal’s new lease on life, a guy who resolves to live rather than exist and turn his boring story into an epic. But Randal’s excitement is a mask for desperation, as he amplifies his God complex to ensure he leaves his mark, and Anderson portrays the better and lesser aspects of Randal’s nature simultaneously. 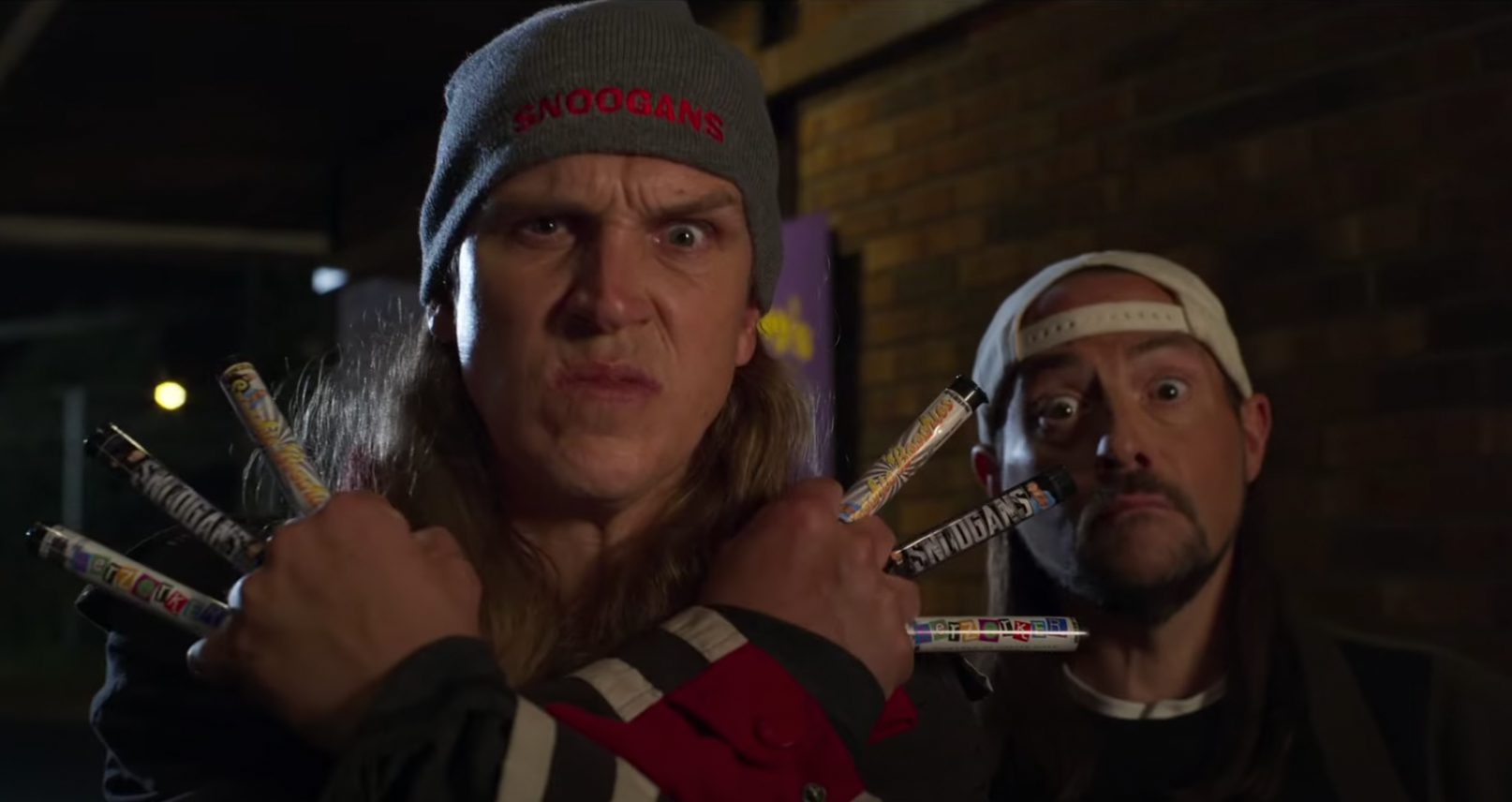 The supporting cast is good, too, even if they don’t have as much to work with as the leads. Jason Mewes simply is Jay at this point, and while he doesn’t have the arc or drama he did in Jay and Silent Bob Reboot, he’s perfectly at home being hilarious every twenty minutes or so. Kevin Smith has also grown as Silent Bob, and while he still doesn’t talk (except for the one or two inevitable moments), he finds ways to communicate what Bob is thinking and has become more expressive since the early Askweniverse films. Rosario Dawson is amazing, as she was in Clerks II, bringing Becky to life in a way that makes it perfectly clear why Dante fell in love with her, and her presence is commanding whenever she’s on the screen.

However, there are some things that I wish were different in Clerks III, and they keep it from being quite as good as the other two. The biggest one is Trevor Fehrman’s Elias, the nitwit from Clerks II who existed almost entirely to be abused by Randal. He worked perfectly in that film, but here, he’s too much. He’s too important to the story, and while the major change he goes through in the first act is funny for a while, it wears thin eventually. Worse is his new sidekick, Blockchain Coltrane, played by Austin Zajur. Why Smith decided to give Elias a sidekick is beyond me, but Blockchain is so unnecessary he could be taken out of the movie and nothing would be affected. He’s not funny, and what little he does would have been better off done by Elias – or just by Elias because the two are always together, like a bargain-bin Jay and Silent Bob with none of the charm. I also didn’t care for the music this time, save for the song that plays as the credits begin; aside from my personal tastes, it didn’t feel as relevant to the movie as the music in the first two did, especially Clerks II, which had an excellent soundtrack. 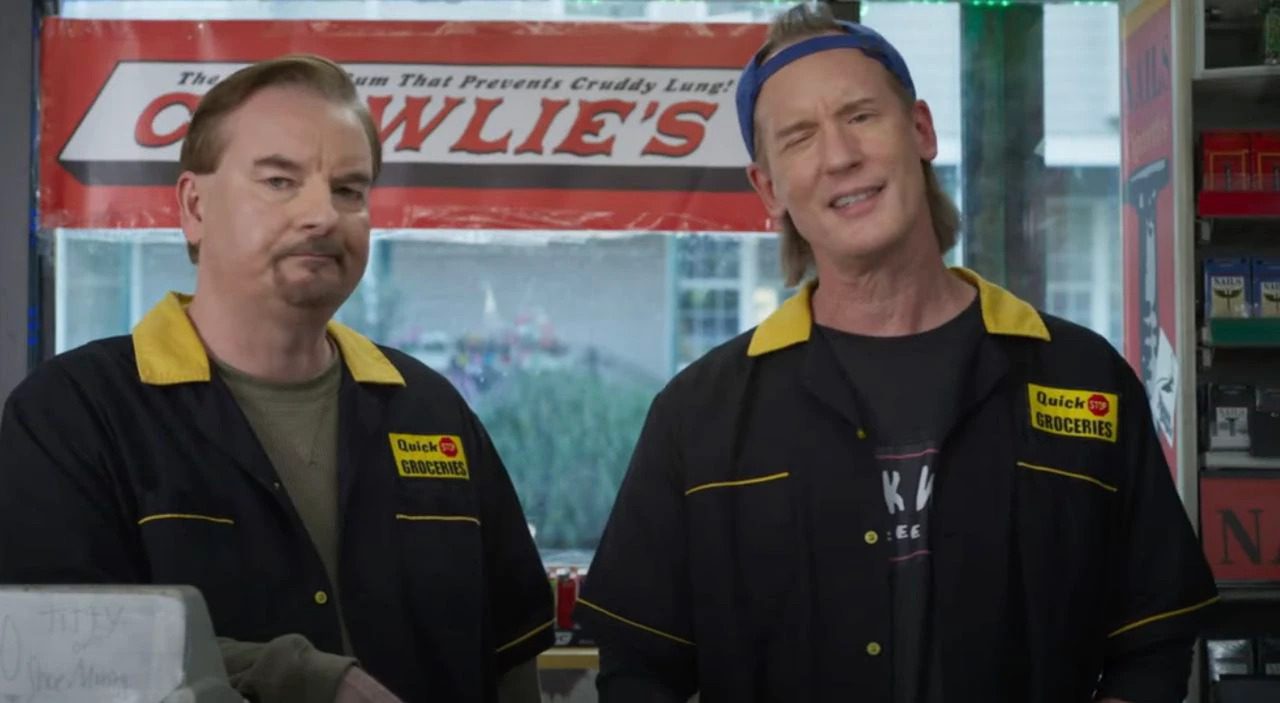 But there’s too much good to dwell on that (although Blockchain really annoys me.) The filmmaking, while not revolutionary, is still pretty good; I think Smith is too hard on himself when he makes self-deprecating jokes about his camerawork. There are a few shots in here that I very much enjoyed and that tell Dante and Randal’s story visually instead of just through the dialogue. I also love the costuming; it’s mostly a series of references, but again, done with a purpose. (Pay close attention to who is wearing what when, and not just the main characters.) The Askewniverse has gotten so big, and that is reflected in Clerks III, but the story remains intimate, concerned with the two guys who started it all and the legacy they don’t even realize they’ve created.

Clerks III is a funny and poignant look at Kevin Smith’s first two characters and how they deal with mortality. One of the supporting players wears out his welcome, and another falls flat immediately, but Dante, Randal, Jay, and Silent Bob are all terrific once again, and the references to past movies and Smith’s life work.