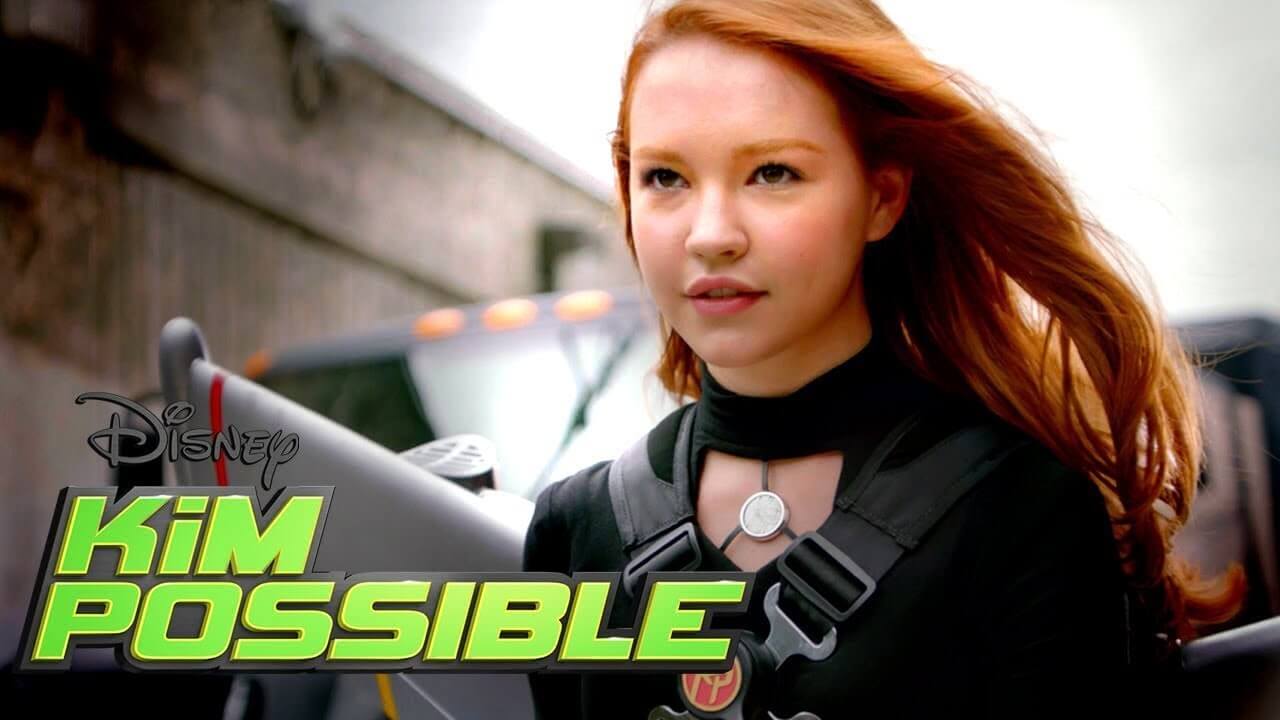 I try not to judge movies based on trailers because they are often misleading and sometimes poorly edited. Everybody can probably name a movie that had bad trailers but ended up being pretty good, and vice versa. That being said, from the very first promo image of Disney Channel’s live-action Kim Possible movie, I was a little concerned. The costumes were similar to those in the original animated series, but beyond that, everything signaled to me that this reboot would take KP’s brand but not its spirit. The announcements that Patton Oswalt would be reprising his role as Professor Dementor and that Christy Carlson Romano would have a cameo did pique my interest, and I’m nothing if not curious, so I decided to watch the movie after all. Is the new Kim Possible an insult to fans, a brilliant re-interpretation for a new generation of kids, or somewhere in-between? Let’s take a look.

Kim Possible opens with a narration from Kim about how she got into crime-fighting, as well as introductions for the major characters. It’s not long before the action begins, as Professor Dementor has been coercing a scientist into creating a goofy substance that can disintegrate anything. Kim and Ron save the scientist, and the latter accidentally walks into the lab’s self-destruct button. Thanks to Kim’s jetpack, they get away, and Dementor is arrested. The next day, Kim is off to her first day of high school and faces threats like almost missing the bus. Meanwhile, Shego breaks a vengeful Dr. Drakken out of jail. Kim ends up arriving at all of her classes late and earning the ire of her teacher Mr. Barkin, prompting her to proclaim it the worst first day of school ever. However, she and best friend Ron find a girl crying and talking on the phone, saying how she didn’t make any friends at school that day. They decide to cheer her up and find that she’s a new girl named Athena who idolizes Kim. They give Athena a makeover, Kim trains her in crime-fighting, and she begins joining them on trips to Bueno Nacho, their favorite restaurant.

Soon things take a turn as Athena begins outshining Kim at everything from academics to fighting, causing Kim to doubt her abilities and even her own self-worth. She decides to visit her Nana, a skilled martial artist as in the animated series. When Kim declines to partake of fresh brownies, Nana kicks her butt with a bow-staff, finally prompting Kim to spill the beans. Nana tells Kim that being jealous instead of supportive of Athena isn’t a good look, to Kim’s response that she no longer knows who she is without her usual excellence. Back at school, a rally is being held to give Athena a new award: most promising freshman. Ron talks Kim into going so they can support their friend, but things go wrong, resulting in further humiliation for Kim, and the kidnapping of Athena at the hands of Drakken and Shego. Kim enlists not only trusty sidekick Ron but also her mom and Nana to help her save Athena. However, Athena turns out to be a robot manufactured by Drakken and Shego for the express purpose of stealing Kim’s “spark” and undermining her as a serious threat to them. Despite this revelation, Kim and crew nonetheless rescue Athena from being destroyed and her “spark” being given to Drakken, who is turned into a little boy. All’s well that ends well, and they use the kiddie Drakken to tease a potential sequel/TV series. 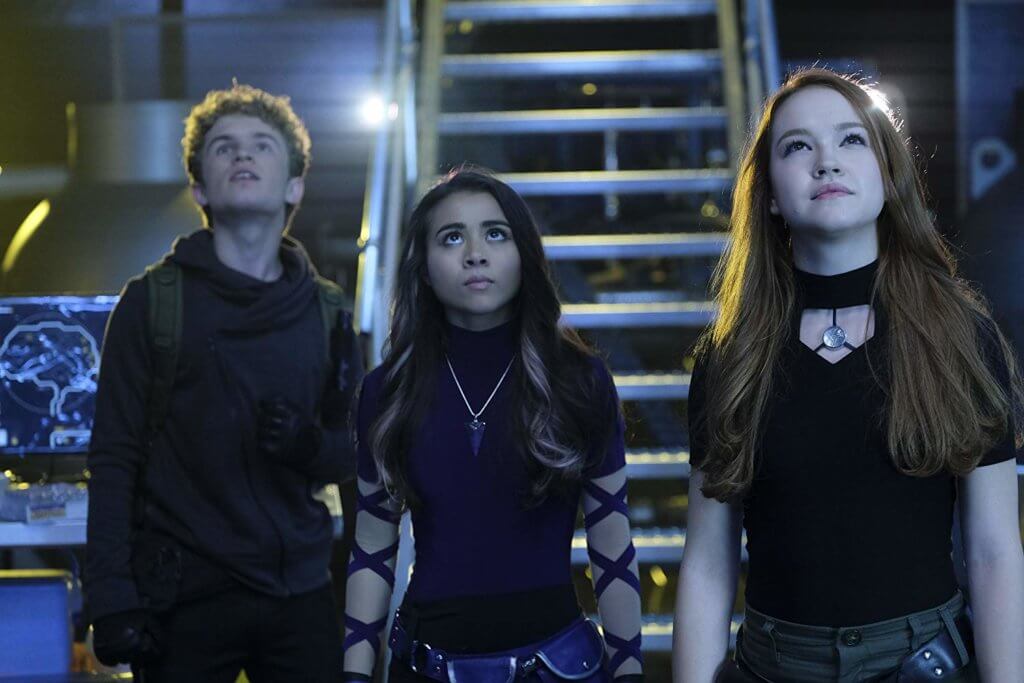 This movie was a strange idea from the outset, and the final product definitely lives up to the bizarre concept. It seems to me that the ship for Kim Possible sailed about a decade ago, and even though I enjoyed the animated series, I’m not sure why a live-action film adaptation was necessary, or even deemed to be profitable. Nevertheless, there is some merit to this movie. Todd Stashwick and Taylor Ortega nail the roles of Dr. Drakken and Shego to a T, the former a pathetic, overdramatic laughing-stock and the latter a sharp-tongued badass. Sean Giambrone is also pretty good as Ron, though it feels like the writers flanderized his character, leaving his clumsy awkwardness as his only trait. Michael P. Northey is also hilariously ridiculous as Mr. Barkin, and I love his love for cats. I enjoyed the scene where Athena exploits this weakness to get Kim and Ron out of trouble by saying they were volunteering at a cat shelter, explaining their tardiness. Patton Oswalt is every bit as funny in this as I’d hoped, and I’m so glad they got him back. I also like the idea of Kim taking a fan under her wing, and the idea of her teaming up with her mom and Nana for a mission. However, I don’t necessarily think the execution was done well. We’ll come back to that.

I initially didn’t like Sadie Stanley as Kim, and now having seen the film, I’m more ambivalent toward her. She’s really good in dramatic/emotional scenes, such as when she breaks down at Nana’s, or later when she apologizes to Athena. However, I didn’t find her believable in action/fight sequences, and any time she tries to be cutesy or wink at the camera, it’s cringe-worthy. And although this isn’t the actress’ fault, I don’t like the direction in which they take Kim in the film. I don’t recall Kim ever having to overcome being a “bad friend,” despite having her own insecurities at times. It feels like when Athena shows up, Kim sort of becomes a bad person. It’s never clear if her shift in personality is also a symptom of her spark being drained, or if she just becomes a bad person when faced with adversity of any sort. I’d also have liked to see more of the villains in Kim Possible, as they ended up being some of the best parts.

I have nothing against Alyson Hannigan, and in fact, I’ve never seen her in anything aside from some minor vocal roles. But she never feels believable as Kim’s mother Ann, due in part to their superficial dialogue and lack of chemistry. She also doesn’t feel believable as a skilled fighter and brain surgeon. In fairness, the movie is – for the most part, at least – a comedy, but these particular elements just aren’t funny. They come off as awkward or forced, but they never inspire laughter. Connie Ray is similarly oddly cast as Nana Possible; again, her lack of evident prowess could have been used for laughs or even to make a point, but instead, it just kind of hangs in the air. I’m not sure why they even included Rufus the naked mole rat, as he’s a complete afterthought in this iteration of Kim Possible. 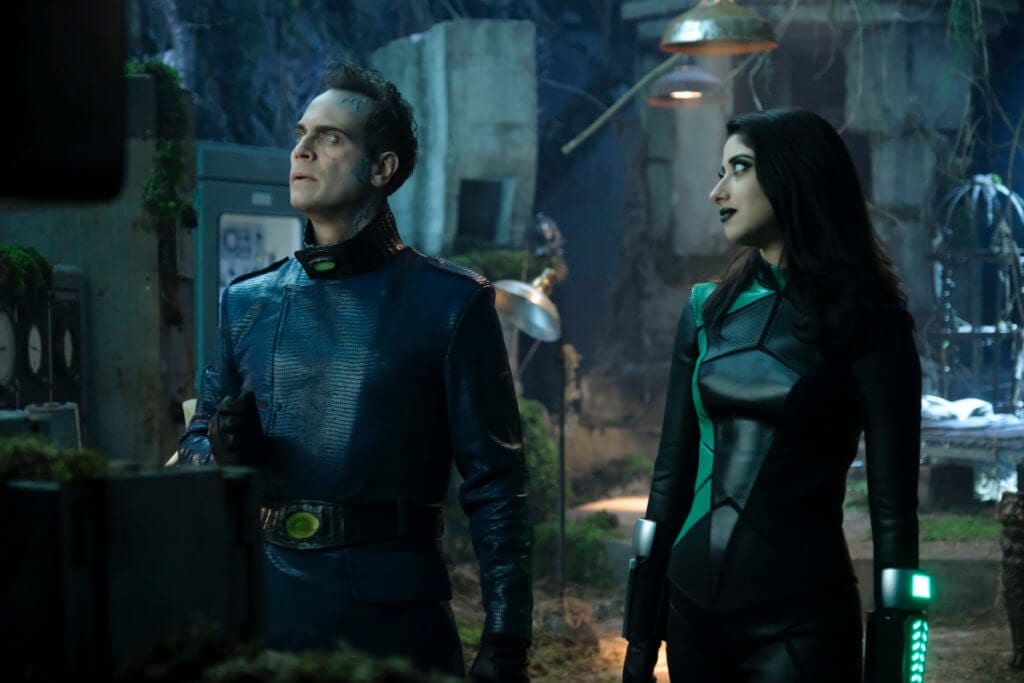 Athena’s purpose within the story is obvious from her first scene, but I’m willing to be a little lenient because I don’t care about being surprised. Ciara Riley Wilson also gives a decent performance here. I feel like one easy way they could have made Kim Possible a lot better and more memorable would have been to flesh out Kim and Athena’s friendship a little more, and even Kim’s friendship with Ron. Most of these characters never really feel like people who know each other and have a connection. I also don’t like how they made all of the male characters timid and house-dwelling, with father James Possible and brothers Jim and Tim being reduced to window dressing. In the TV series, Ron was wimpy and awkward, but that was what distinguished him; it wasn’t simply a symptom of being a guy. While it was good to see Christy Carlson Romano again, I didn’t care much for her very brief appearance. Oswalt is one of the film’s highlights, but Romano feels like just another thing they tacked on to wink at fans of the original. I know this is a TV movie with a lesser budget, but I just can’t help it; I really don’t like the costumes and overall look of the film. Aside from the use of the original theme song at the beginning (with laughable clips of Kim in action playing on screen), none of the music is memorable or exciting.

Overall, Kim Possible isn’t that bad for a Disney Channel movie, but that’s not saying a whole lot. Despite having some wink-wink references and sight gags, this really isn’t something for adult fans of the original. It’s pretty harmless for kids, but I do find the way the film portrays its male characters strange and uncomfortable, particularly as it wasn’t like that in the cartoon. I can’t say I’m mad or disappointed because, if anything, Kim Possible turned out a little better than I expected; a couple of great casting choices can repair a lot of damage done by a ridiculous premise and stunted character relationships. If you have kids who want to see Kim Possible, or even if you’re morbidly curious like me, I’d say check it out. It’s free, and you can always just turn it off if you get tired of it. Personally, I took a break about 45 minutes in to get Taco Bell because that somehow seemed better than watching this movie. If you thought the ads looked terrible and have no interest in a new iteration of these characters, you wouldn’t be missing much by skipping it.

Overall, Kim Possible isn’t that bad for a Disney Channel movie, but that’s not saying a whole lot. Despite having some wink-wink references and sight gags, this really isn’t something for adult fans of the original. It’s pretty harmless for kids, but I do find the way the film portrays its male characters strange and uncomfortable, particularly as it wasn’t like that in the cartoon. I can’t really say I’m mad or disappointed because, if anything, Kim Possible turned out a little better than I expected; a couple of great casting choices can repair a lot of damage done by a ridiculous premise and stunted character relationships.