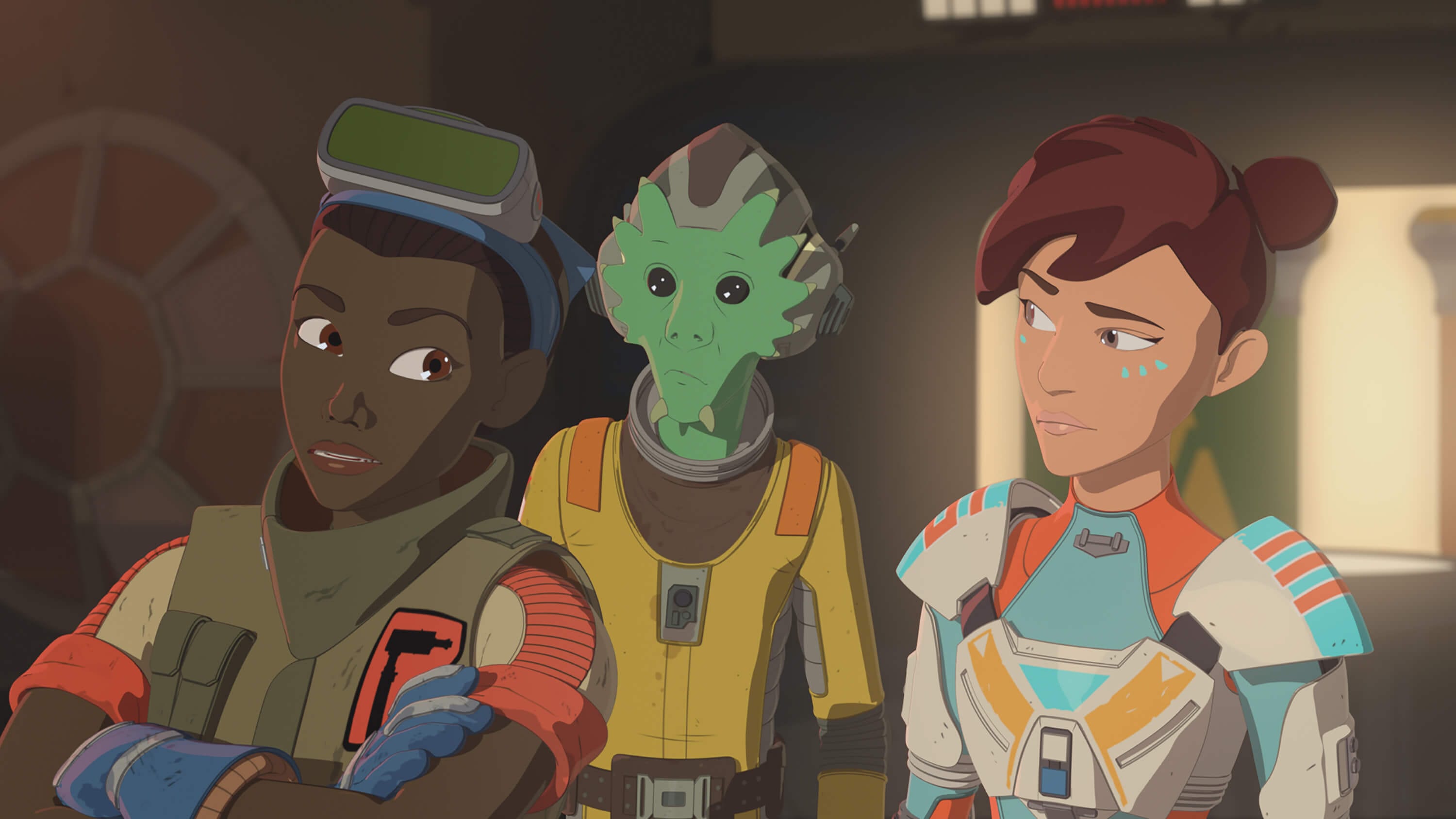 “The Disappeared” opens with a race, which Pyre warns Doza could pose a threat to security. Meanwhile at Aunt Z’s, Neeku, Kaz and Tam talk about the possibility of becoming ace pilots in the next race. Some stormtroopers show up and demand that Aunt Z display recruitment posters in her bar. Doza cancels the upcoming races after Pyre says he can’t guarantee security with so many pilots on the air. Unsurprisingly, Tam defends the First Order, saying that sometimes things have to be sacrificed for safety. After Hype is missing for a while, everyone gets concerned, and Aunt Z says that the First Order probably took him. Immediately, two troopers and a droid show up. Tam asks them about Hype, and one of the troopers says Hype left after the races were canceled, which Torra says would be uncharacteristic for him. Torra and Kaz decide to search for Hype and find only his ship, which is marked to be scrapped. Kaz heads to Aunt Z’s, but she isn’t there. A droid-bartender informs Kaz that Aunt Z is gone. We then cut to Z, Hype and some others in a detainment cell, with the former trying to escape. Kaz and Torra go to Yeager’s shop and are shocked to find Captain Doza there. He says that the prisoners are set to be transported off-world. Yeager and Doza want to break the First Order’s communication on the Colossus, but Kaz says there won’t be time for that before the prisoners are taken, so he and Torra go to break them out. Kaz tells Aunt Z and hype to board the transport ship as ordered; he and Torra take control of the ship and help them escape. However, when Kaz arrives back at the shop, the troopers are there, and he’s under arrest, along with Yeager and their friends.

In “The Disappeared,” Resistance continues its newfound focus on characters and story. Tam isn’t in this episode much, but as usual, she’s defending the First Order no matter what. I was pretty sure she was going to change her mind after her discussion with Kel and Eila in “The New Trooper,” but now I’m starting to question that. It seems possible that they could go that route with her character, or they could have her become more pro-First Order and eventually join them. This second possibility could give her some importance within the show and the overall Star Wars universe. It’s entirely possible that they wouldn’t go that dark with a seemingly friendly character in a Disney Channel series and I’m reading too much into it, but it could be cool. There’s a little bit of a misdirect near the beginning of “The Disappeared,” where at first it seems like the episode could be about the friends competing to become ace pilots, but then their aspirations are halted by Doza’s cancellation of the upcoming races. They tend to focus a lot on Commander Pyre as a villain in this show, but we don’t know anything about him, and we’ve never once seen him without his helmet on. He’s a little bit like the First Order itself, in that he’s this scary, imposing force, but we don’t really know why he’s this way or what he wants. This show could be majorly improved if they would make their villains more interesting and fun to watch; does this guy even have a personality? He’s no Darth Vader or Palpatine, I’ll tell you that.

Doza also doesn’t appear very much in “The Disappeared,” and Yeager is absent to an even larger extent, but I really like it when Kaz finds them together in the shop and learns their plan. It’s nice to see that Doza is at least willing to stand up against the First Order now that they’re clearly overstepping their bounds; if anything, I only wonder why he wasn’t willing to act sooner. I was beginning to wonder if they’d have to threaten Torra directly and openly to get her father to choose a side. Torra is admirable for her willingness to stand up to her father as well, knowing full well how likely he is to listen. The relationship between these two intrigues me, and I wonder if they’ll do another episode about the family like “The Doza Dilemma.” I’m also still hoping Synara will come back at some point, as I was intrigued by her storyline and characterization. Even with the recent increase in Resistance’s quality, inconsistent as it may be, one of the show’s main problems is that the side characters seem to be more interesting and complex than the main characters.

In “The Disappeared,” Kaz and Neeku don’t get anything interesting to do, though Neeku did get one chuckle out of me this week. Although Kaz is with Torra for the whole episode, and Tam for part of it, he seems like he’s on autopilot. It’s like he’s in the back seat and the side characters are driving, but he’s not even adding to the conversation or the plan; Torra takes a lot of the initiative in saving the prisoners. I do like the scene where he observes that Yeager’s plan won’t work and they have to do something, though. His fake explanation to Tam about throwing a party was extremely lame, and while she sees straight through it, I’m surprised even poor Neeku fell for it.

The animation is pitiful in “The Disappeared,” just as it always has been, but the musical score is really growing on me. Michael Tavera’s music shines and manages to elevate the scenes it inhabits and heighten the emotions of the viewer. He’s done lots of scores for children’s TV programs and direct-to-video movies, and honestly, I feel like he deserves more. The music is consistently one of the best things about this series.

“The Disappeared” is a decent episode of Resistance, but not a great one. Lately, it feels like they’re genuinely trying to give this show some dramatic weight. It’s leading to some mixed results, but the evident increase in effort is appreciated nonetheless. There are definitely still problems, namely that Kaz and Neeku are the weakest characters despite getting the most focus. The comedy is still usually pretty bad, and even the characters and stories that do work could be stronger. Only time will tell if Resistance continues to improve.

“The Disappeared” is a decent episode of Resistance, but not a great one. Lately, it feels like they’re genuinely trying to give this show some dramatic weight. It’s leading to some mixed results, but the evident increase in effort is appreciated nonetheless.