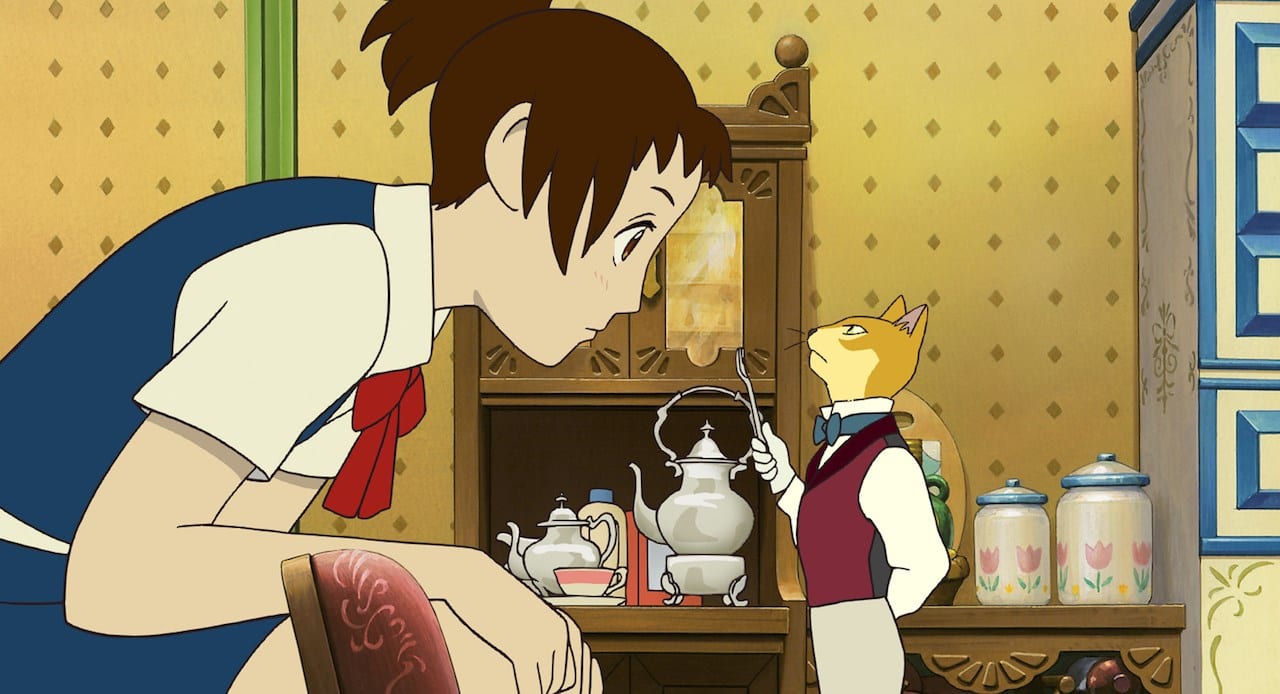 Note: I won’t be reviewing Spirited Away, but you can find Nick’s review here.

When I watched some of the Studio Ghibli films back in high school, I remember really liking The Cat Returns. 1995’s Whisper of the Heart introduced a fan-favorite character in Cary Elwes’ Baron, a cat figurine who comes to life in the film’s fantasy sequences showing the development of Shizuku’s novel. The Baron was so popular that a theme park commissioned a short film featuring him and Muta, the fat cat Shizuku follows across town. When the theme park backed out of the deal, the footage was reworked into a feature film directed by Hiroyuki Morita. Despite being spun-off from Whisper of the Heart and sharing two of its characters, The Cat Returns couldn’t be more different from it tonally and stylistically. Let’s have a look.

The Cat Returns follows an insecure schoolgirl named Haru (Anne Hathaway). Her life seems normal until she saves a cat in the way of traffic on the road. Soon, talking cats appear left and right, offering Haru gifts and services to repay her for saving the son of the Cat King (Tim Curry). A mysterious voice instructs Haru to seek help at the Cat Bureau to get rid of the felines. Here, Haru meets the Baron (Elwes,) Toto (Elliot Gould), and Muta (Peter Boyle). The former two are eager to help, but Muta tells Haru she shouldn’t have saved the Prince, and none of this would have happened if she hadn’t. The Baron offers Muta food, and he offers to help. Soon, Haru is scooped up by the King’s followers, and Muta follows them into the Cat Kingdom. It’s up to Haru and her friends to stop her forced marriage to the King’s son and get her back home before she turns into a cat. 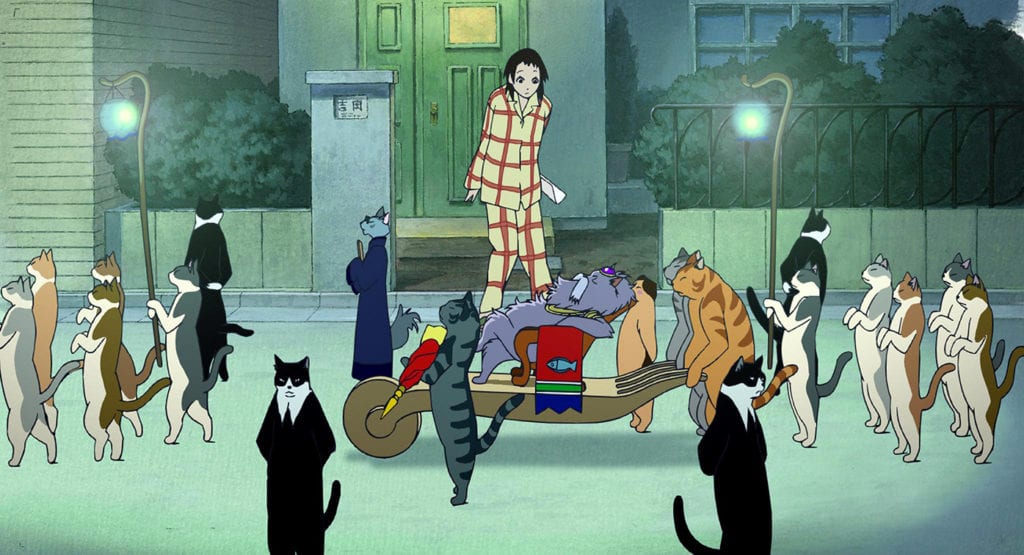 Before we get too deep into things, I have to say that I admire the wackiness of the story in and of itself. Regardless of how you feel about the movie, the filmmakers knew what they wanted, and they went for it. Haru isn’t quite as engaging as Shizuku was in Whisper of the Heart, but The Cat Returns is more of an action-adventure compared to the introspective character study of the former. Aside from the opening few minutes in Haru’s home and school, The Cat’s Return is like a film made entirely of the fantastical book sequences from Whisper of the Heart. I remember liking this film better than its predecessor when I first saw them, and I think that would be an easily defensible take, but now, I feel the opposite. 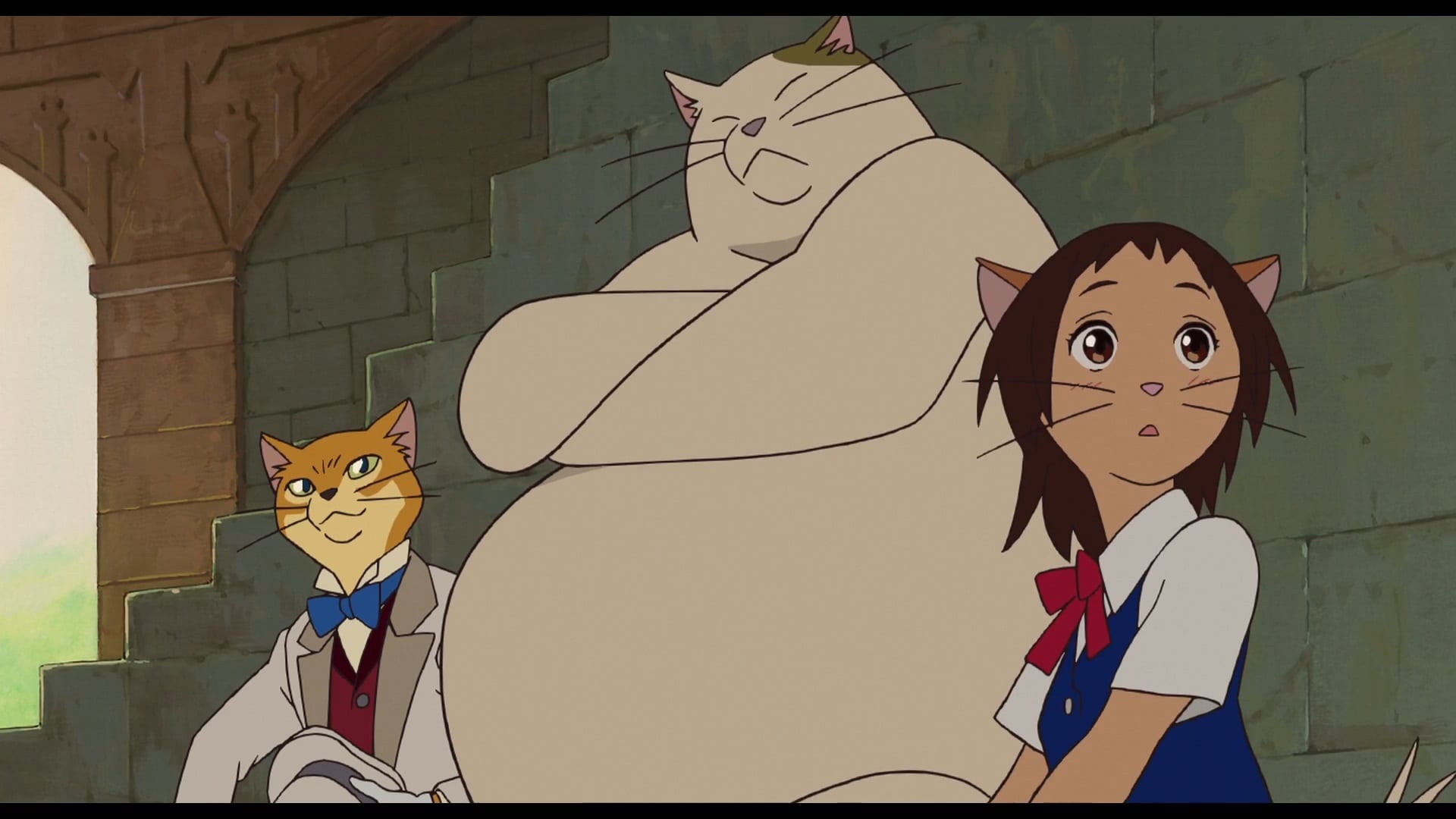 Haru is a likable enough protagonist, and she certainly behaves as a high schooler would. Anne Hathaway is a little old for the role, but she’s spunky and not too distracting. I like Hathaway a lot, so I may be more forgiving here than of Miley Cyrus playing a little girl in Bolt, for example. Peter Boyle and Elliot Gould are amusing as Muta and Toto, and their banter is a highlight of the film. Cary Elwes is charming and charismatic as the Baron, reprising the role from Whisper of the Heart. It’s funny how different Muta is in The Cat Returns, mainly because he can talk and stand upright. We get to see more of his personality; in Whisper of the Heart, he just seemed like a lazy, fat cat who didn’t care about anything. Here, Muta starts out gruff and mostly stays that way, but we get to see his softer side as he grows to care about Haru. His disdain for the Cat Kingdom is hilarious, especially near the end when he’s revealed to be a feared criminal unwelcome there. The Baron isn’t really in The Cat Returns that much, and the film only runs about 75 minutes overall. This isn’t so much a complaint as something I just find strange. The Cat Returns is a lot of fun, though, and quite funny at times. I really like the look and feel of the Cat Kingdom. The way it works is interesting, too, like the cats turning Haru into a cat to marry the Prince. My favorite part of the movie is probably a recurring reference to a white cat who turns out to be one Haru knew as a little girl. It’s simple, like the rest of the film, but Yuki’s devotion to the girl who once saved her life is really sweet and got to me as a cat lover myself. 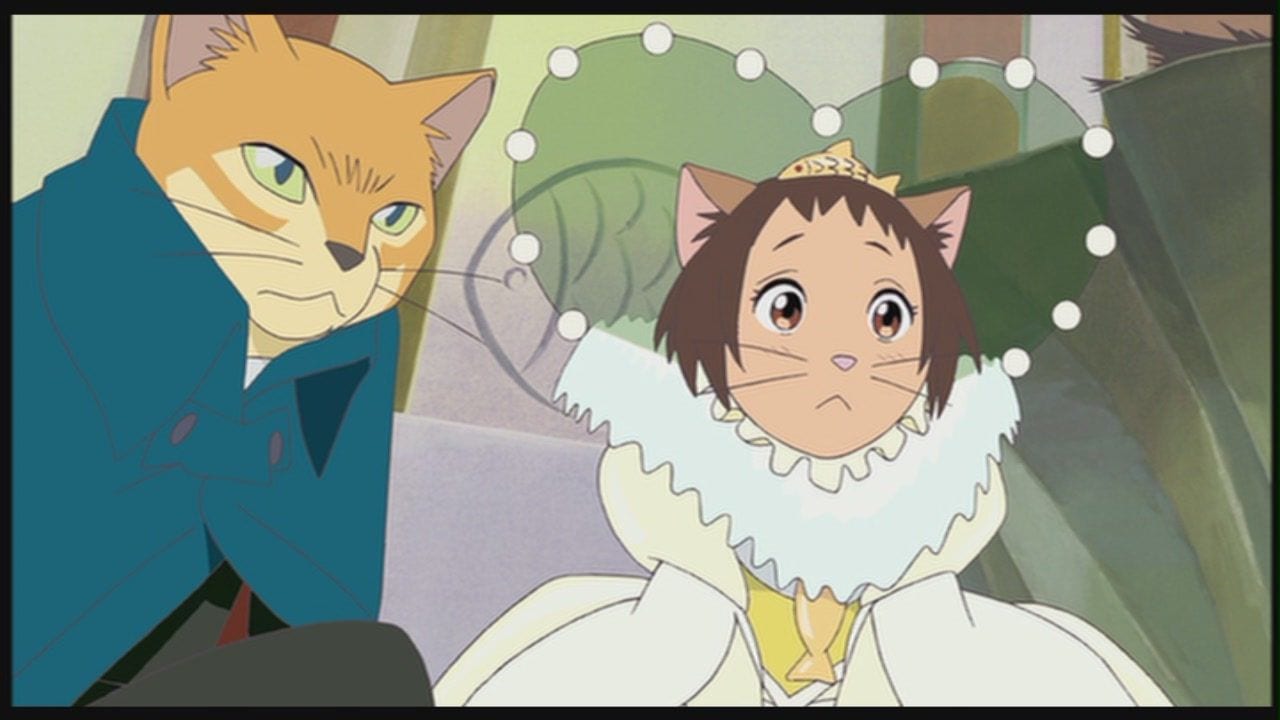 The animation in The Cat Returns is unlike any other Studio Ghibli film. The designs are unique and give off a lighter feel, but the movements are different too. Even plants and food look different than how they’re shown in Ghibli’s other works. I was initially surprised that The Cat Returns looks so different from Whisper of the Heart, but that’s in keeping with everything else about the film. The original musical score by Yuji Nomi also evokes an adventurous, fun mood. It’s uplifting, but in an exciting sense, not necessarily an emotional one. The voice acting is one of the aspects of The Cat Returns that most impressed me. Even with his limited screen time, Elwes gets more of an opportunity to flesh out the Baron here than in Whisper of the Heart. He has excellent chemistry with Gould, Boyle, and especially Hathaway as Haru. Tim Curry plays the Cat King, doubling as antagonist and comic relief. Most of the characters in this film provide some gags. He is really funny, creeping on Haru while simultaneously trying to marry her off to his son. Some of the comedy doesn’t fare as well, like when Haru says she’s a “meowsy dancer.” Yuck. Studio Ghibli tends to get impressive voice actors for their dubs, and this is no exception. 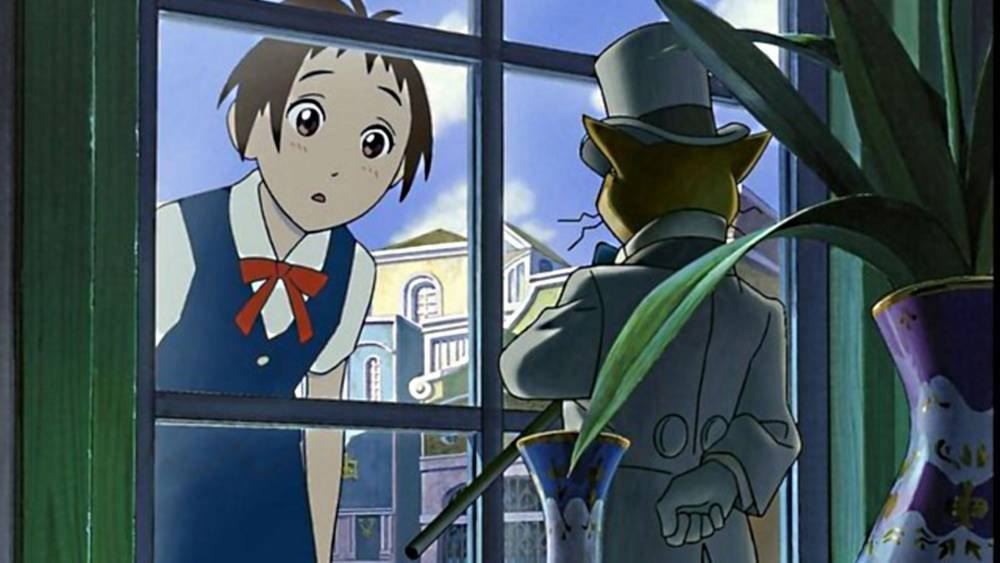 Overall, I liked The Cat Returns. This is a lighter movie with an air of adventure that follows a moving story of adolescence and love. It’s a weird juxtaposition, but I think it works, with the characters of Muta and the Baron as the connective tissue. They help two different girls through two very different situations. Whisper of the Heart is the far superior film in my book, but I’d gladly rewatch The Cat Returns. It’s fun, breezy, and pretty to look at.

Overall, I liked The Cat Returns. This is a lighter movie with an air of adventure that follows a moving story of adolescence and love. It’s a weird juxtaposition, but I think it works, with the characters of Muta and the Baron as the connective tissue. They help two different girls through two very different situations. Whisper of the Heart is the far superior film in my book, but I’d gladly rewatch The Cat Returns. It’s fun, breezy, and pretty to look at.