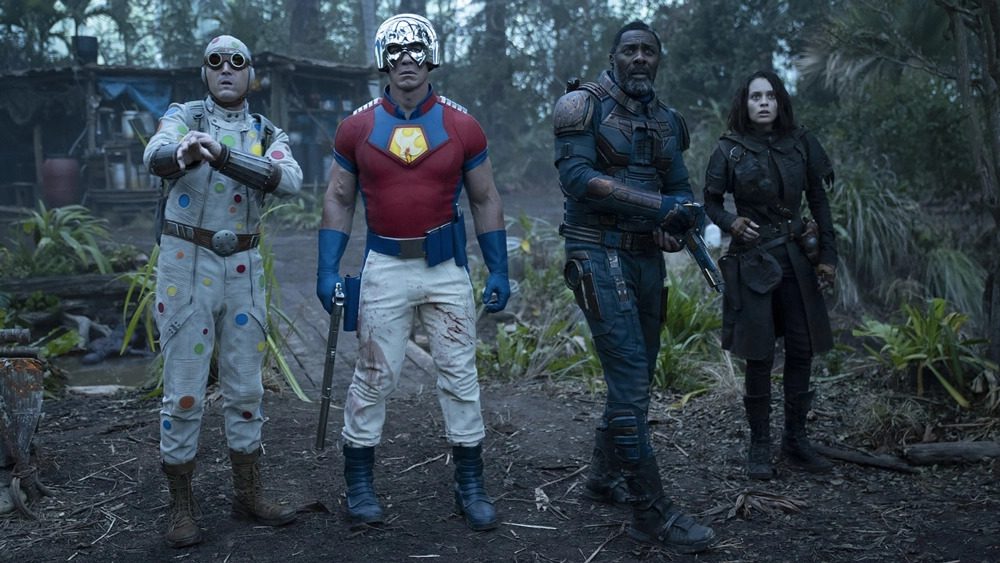 When a movie about supervillains in a comic book world opens with “Folsom Prison Blues” playing over bad guy Savant (Michael Rooker) tossing a bouncy ball around, you know you’re in for something different. The first 15 minutes of James Gunn’s The Suicide Squad are incredibly fast-paced, absolutely bonkers, and full of so much violence and death even Tarantino would shield his eyes (while peeking through his fingers, of course). This sets the tone for the rest of the movie; it does not slow down often, and it definitely does not get any less bloody.

There’s no time to process what just happened, either, before you’re suddenly hit with a plot twist and clever transition into character introductions. Creator of Task Force X aka The Suicide Squad Amanda Waller (Viola Davis) gives us backgrounds on our new players: King Shark (Sylvester Stallone), Peacemaker (John Cena), Polka Dot Man (David Dastmalchian), Ratcatcher 2 (Daniela Melchoir) and Bloodsport (Idris Elba). Waller explains to her squad that an island named Corto Maltese is the home of a scientific facility known as Jotunheim that will need to be infiltrated so all traces of a “Project Starfish” can be erased before it’s used to destroy the world.

As far as plots go, it’s your typical comic book plot: bad guys want to destroy the world, team of super-beings is sent to prevent that from happening. Nothing special there. What IS special is James Gunn’s take on this world. Warner Bros. gave Gunn full reign to do whatever he wanted, and it was the best decision they could have made. It’s pure Gunn: anarchic, violent, funny, and even downright wholesome in moments, despite being a movie about truly evil and despicable beings. Gunn was able to bring the Guardians of the Galaxy, who were not popular when their movie was announced, to life and turn them into a successful franchise in their own right. He does the same here. Gunn’s talent for making you care about characters that are lame and have little to no fanbase (looking at you, Polka Dot Man) is truly remarkable and unmatched. John Cena’s Peacemaker, arguably the vilest of the whole group, even has you saying “I kinda like this guy” at various points throughout the movie before making you absolutely hate him again. Honestly, no one else could have played that role. Cena nails it. He’s perfection.

The whole cast is remarkable, and while Gunn gives each actor their chance to shine, the standouts (besides Cena) are definitely Daniela Melchoir’s Ratcatcher 2 and David Dastmalchian’s Polka Dot Man (I know, but hear me out). Ratcatcher 2 is a new character completely created by Gunn, and she’s the heart of the movie. The only one of the group to not be a cold-blooded killer, her loving and innocent nature brings a balance to the dark personalities around her. Daniela plays her brilliantly, and I hope we get to see more of her. Polka Dot Man has never really had a big fanbase; he’s considered a very lame character and a bit of a joke. He’s certifiably creepy in this movie, but you still feel sympathetic towards him and genuinely start to root for him. David gave the character life in an unexpected way, and I think after this movie, Polka Dot Man just might start getting some well-deserved attention. Well, maybe not. But seriously, as someone who wasn’t expecting anything from his character at all, I was taken aback by how well he was done. Honorable mention goes to Ratcatcher 2’s pet rat, Sebastian, and King Shark, who are both just flat-out adorable and likable right from the start. (Who doesn’t love cute animals, amiright?) 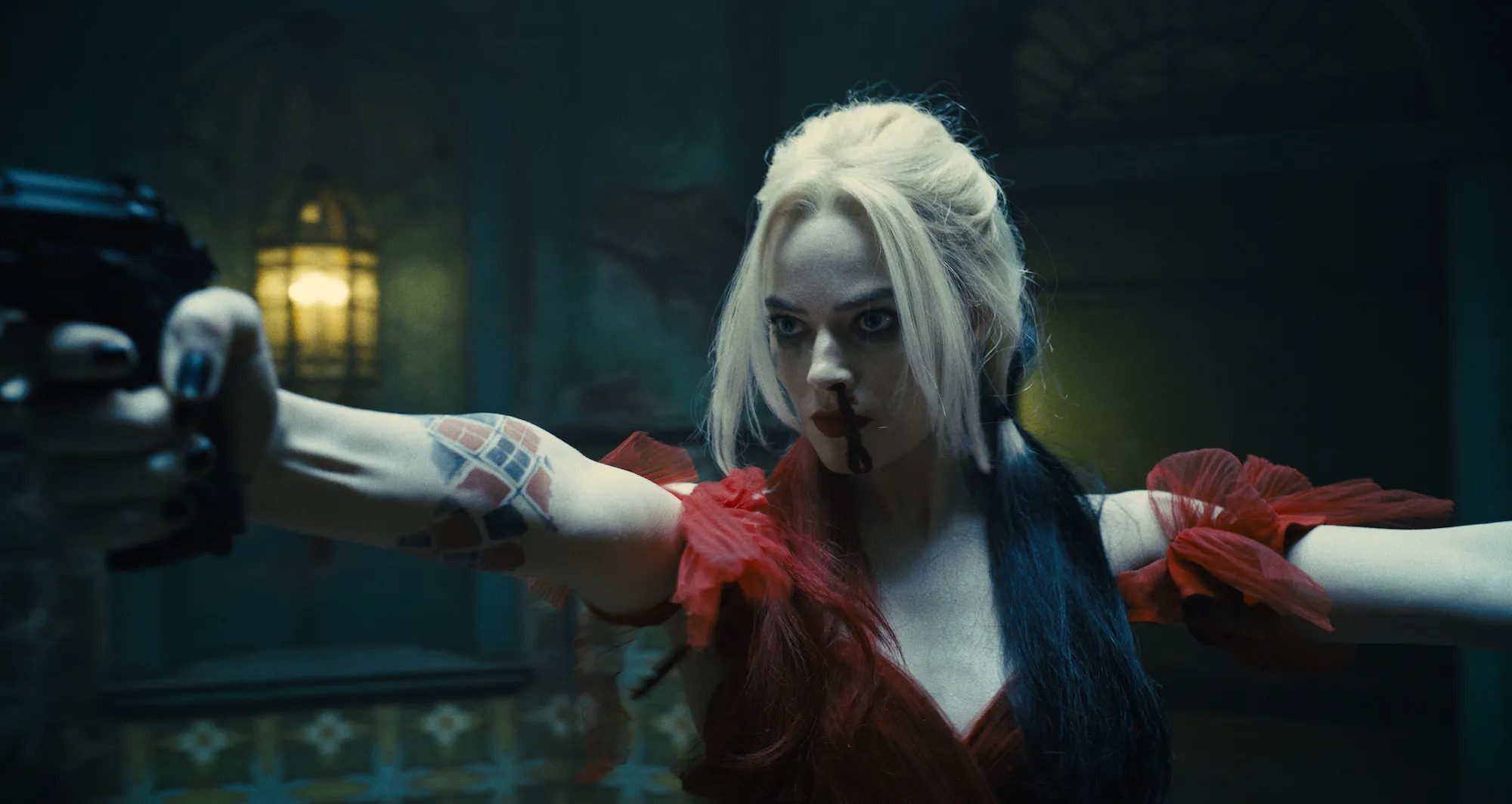 If you’re a fan of Gunn’s directorial style, like I am, you’ll really appreciate this film. He went all out with this one. The colors are vibrant, the filming style is over-the-top comic book, and the scene transitions are very clever; for instance, there’s a pile of junk that, when viewed a certain way, spells out “Jotunheim” as the camera passes over it. My favorite camera angle is a fist fight being reflected in Peacemaker’s helmet before transitioning into watching the fight in real time; it’s just gorgeous. This movie is edited very well, but like I said earlier, it moves very quickly, so keep that in mind when you go to watch it. It doesn’t take away from the movie, but it is a bit jarring until you get used to the pace. You also don’t need to have seen Suicide Squad 2016 in order to enjoy this movie; while in the same universe, it’s not a direct sequel, so it can be viewed as a separate story. And, while I don’t want to compare the two movies simply because they’re so different, I will say this one is objectively way better than the 2016 version.

All in all, The Suicide Squad is an insane, over-the-top comic book film that audiences across the board can enjoy. Friendly reminder, however, that this movie is rated R, and it is a HARD R rating, so I would definitely leave the kiddos at home for this one. Trust me; you’ll thank me later. I haven’t been disappointed by a James Gunn film yet, and this one is no different. I loved it, and I hope you will too.

Just remember: Do NOT get attached. Our “heroes” are just DYING to save the world.

No one is safe.

The Suicide Squad is currently in theaters in the UK and releases TOMORROW, August 6th, in the US.

The first 15 minutes of James Gunn's the Suicide Squad are incredibly fast-paced, absolutely bonkers, and full of so much violence and death even Tarantino would shield his eyes (while peeking through his fingers, of course).

This movie was only marginally better than the original Suicide Squad and that’s not saying much at all. There’s no characters worth caring about. It went completely off the rails during the Harley segments. The villain was lame. The first 15 minutes was a telegraphed Deadpool 2 ‘super-duper team that dies immediately’ segment that is not as funny and not particularly impressive in any way. This movie is a 5-6 tops. Have our standards really fallen this far?

Oh yea…Gunn is a one trick pony and a pedo.

I absolutely love this movie! I don’t know how anyone would be able to come out of it withuot caring for these character, they have so much depth to them, Ratcatcher 2 and Polkadot Man’s backstories had me tearing up

“Do NOT get attached”… ehh, i probably should’ve listened to that advice before watching the movie :3