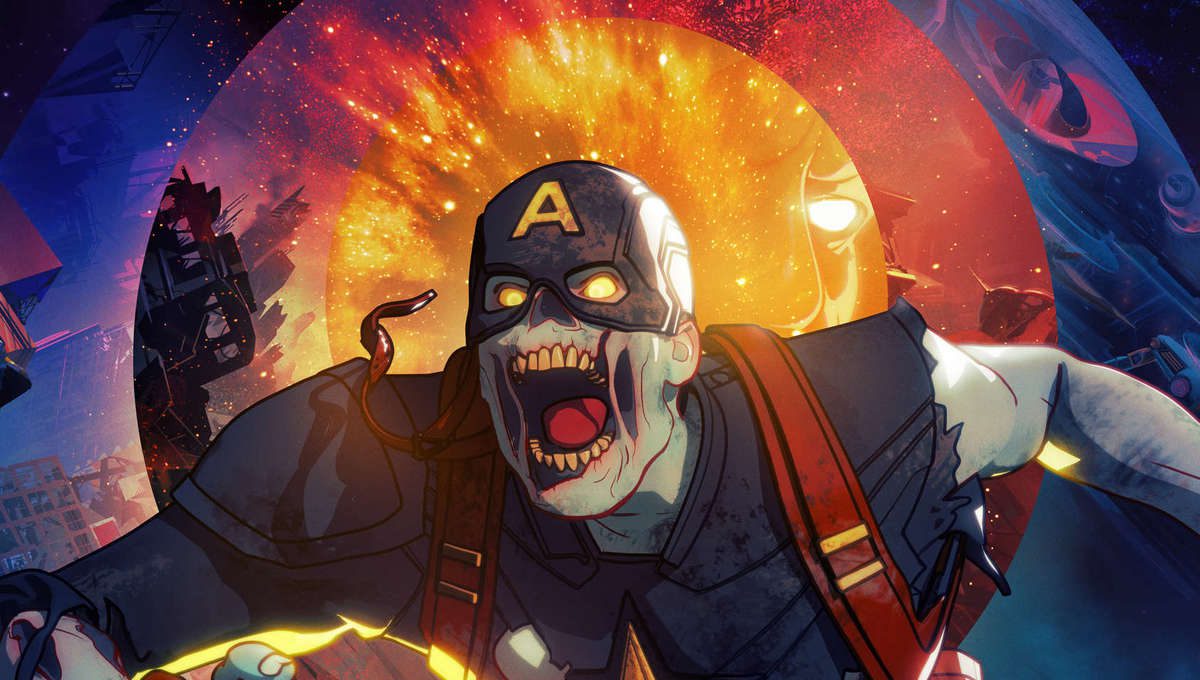 “What If… Zombies?!” is the one we knew was coming. Whether it’s “the one we’ve all been waiting for,” I’m not so sure – I don’t think What If…? had a lot of hype surrounding it in general, despite being better than at least the last two Disney+ Marvel shows. But an MCU zombie apocalypse was brewing, and in keeping with my wondering whether this show has found its groove, it’s pretty good. I don’t like it quite as much as the last two episodes, but it’s better than the premiere and much better than “What If… Space Jesus?”

When Bruce Banner returns to Earth at the beginning of Infinity War, he finds the normally bustling New York City a desolate wasteland. However, when Ebony Maw and Kull Obsidian emerge from a portal, his friends finally show up… as zombies. Trading one extinction-level threat for another, Bruce must join with a ragtag group of survivors to ensure there’s even a world to save from Thanos.

Laying my cards on the table, I’m not a zombie fan. I’ve never cared for them as monsters or villains. They bore me; they have no personality, and I don’t find the slow-moving corpses particularly scary. I understand the argument that it’s more the concept that people find creepy: they’re a force of nature more than a singular creature, and they can symbolize themes from consumerism to communism to whatever else you want them to represent. Fair enough; it just doesn’t work for me. In fact, when I do like a zombie story, it’s usually because it breaks from the norm, like iZombie. So, I was not looking forward to “What If… Zombies?!” But, surprisingly, I liked this one.

One of the interesting aspects of “What If… Zombies?!” is that it uses a lot of zombie movie tropes. When Banner lands in the Sanctum Santorum, we’re expecting the scene we’ve seen a million times in the past few years: he meets Doctor Strange and Wong, is soon reunited with his science bro Tony Stark, and exposits the threat the Avengers face from Thanos. But this time, he’s alone. There’s no rousing start to the story, no comfort from friends long unseen; Banner just wanders an unfamiliar building, then walks through the barren streets of Greenwich Village, not a soul in sight. It’s unnerving, and like a post-apocalyptic zombie movie, it sets the stage for the isolation one would feel when confronted with a land of the dead. (I may not be a fan, but I know the titles.)

When Banner finally does see his friends, the reveal that they’re zombies is gradual – as gradual as it can be in a 22-minute TV episode – with their actions seeming just slightly off until they finally start tearing Maw and Obsidian to shreds with teeth and claws. From here, “What If… Zombies?!” introduces the other expected scenes and characters: the source of the zombie breakout, the motley crew of yet-to-be-infected survivors, the desperate escapes just to stay alive, the potential hope, the corrupted survivor who can’t bring himself to kill a reanimated loved one, and probably some that people better versed in the subgenre would know that I missed. Essentially, you’re seeing a zombie movie played out with Marvel characters, and it’s fun, even if, like me, zombies aren’t your thing.

A lot of that is because “What If… Zombies?!” is focused on the characters. Aside from Banner, the survivors are Spider-Man, the Wasp, Bucky, Happy Hogan, Sharon Carter, Okoye, and Kurt (one of Scott Lang’s thief buddies; you’ll know him when you hear him); later, we find out that Ant-Man, Vision, and Black Panther are still around too. Kurt and Happy are mostly played for laughs, Sharon doesn’t contribute a whole lot, and Okoye and Black Panther are present as a link to Wakanda, but the rest wrestle with what losing everyone they love means for them and their character development at that point in their stories. For instance, Banner is stuck with an army of the walking dead (seriously, I’m not above these) ready to either kill him or turn him; this would be a great time for the Hulk to emerge and smash some puny zombies. However, as in the real timeline, Hulk refuses to let loose, so Banner is stuck running or counting on people who should be much weaker than himself to protect him. Bucky, who was on his way to rediscovering his humanity, now must become a ruthless killer once again, even when he’s faced with his former friends. Ant-Man is cured of the zombie disease, but he’s relegated to being a disembodied head, the loss of his body symbolizing the loss of everyone he’s ever loved.

But the biggies are Spider-Man, Wasp, and Vision. Playing with the concept once again, the what-if moment in “What If… Zombies?!” doesn’t involve events from Infinity War but Ant-Man and the Wasp. While trapped in the Quantum Zone, Janet Van Dyne picked up some inter-dimensional zombie virus and brought it to Earth upon her rescue, spreading the infection through Hank Pym and Scott Lang. Hope is now caught in a world that’s dying because of her, trying to save the few people she didn’t get killed because she wouldn’t let go of her mother. Vision finds himself in that place as well, having developed a possible cure to the virus but being unwilling to do much about it because he refuses to abandon a zombified Wanda. He even goes so far as to feed her some brains, so consumed with grief and loss is the supposedly cold, calculating machine. But they find their salvation in their friendly neighborhood Spider-Man. Peter has lost everyone too, but unlike Hope and Vision, he refuses to surrender his hope that they can make things right. It’s through Peter that Hope gets her belief restored even when faced with becoming part of the nightmare she unleashed, making amends as best she can with what she has left.  And Vision, done sacrificing others for his selfish fantasies, instead sacrifices himself to give the others the Mind Gem, the key to curing humanity. Whether there really is hope, or if even a victory will merely leave Earth defenseless against Thanos, is up in the air, but it’s a neat question to ask.

While much of the episode is good, there are some drawbacks. Now that I’ve kept you in suspense: the animation is still bad. The movements grow on you – or at least grow less noticeable as the action piles on – but “What If… Zombies?!” has some of the worst-rendered characters I’ve seen yet on the show. A few of them don’t resemble the actors portraying the characters, which is doubly strange because so many of them reprise their roles. Mark Ruffalo returns to play Banner, but the face looks so generic it could be anyone. Happy Hogan looks nothing like Jon Favreau, and Scott Lang may look even less like Paul Rudd. However, Vision and Kurt look just like Paul Bettany and David Dastmalchian. It’s a struggle to understand how and why this show is animated like it is. There’s also some misplaced humor; none of Scott’s jokes land, and he’s constantly joking, so his scenes become clock-watchers. However, I did like some of Peter’s, and Bucky has one that some may consider ill-timed, but it made me laugh. And while I loved seeing Banner finally turn into the Hulk and start wrecking the zombie hordes, I’d have liked to have seen more of his fight with Zombie Scarlet Witch. And this may be a nitpick, but it annoyed me that Spider-Man mostly kept his mask off; I know in live-action there’s probably some contractual thing about the stars showing their faces, but this is a cartoon. Still and all, chalk up another win for What If?

“What If… Zombies?!” is a fun, character-based episode that examines how those who give the world hope navigate a hopeless situation. The animation is still a sore point, some of the humor isn’t up to snuff, and there are a couple of missed opportunities, but this is another good episode in a series that’s growing surprisingly strong.

“What If… Zombies?!” is a fun, character-based episode that examines how those who give the world hope navigate a hopeless situation. The animation is still a sore point, some of the humor isn’t up to snuff, and there are a couple of missed opportunities, but this is another good episode in a series that’s growing surprisingly strong.

It’s scary that the Zombie Avengers were smart enough to know how to use their abilities. Reminds me of Zeus from Army of the Dead. I really liked Peter’s moments with Hope especially when she is on the verge of turning. I was not expecting Zombie Thanos though.

It kind of makes me want a sequel or spinoff with Zombie Thanos and his undead hordes. What would a zombie do with the Infinity Gauntlet? Wipe out half the universe but leave their brains? Or maybe just turn half the population into zombies so they could eat the other half and the dwindling resources problem would fix itself one way or the other.