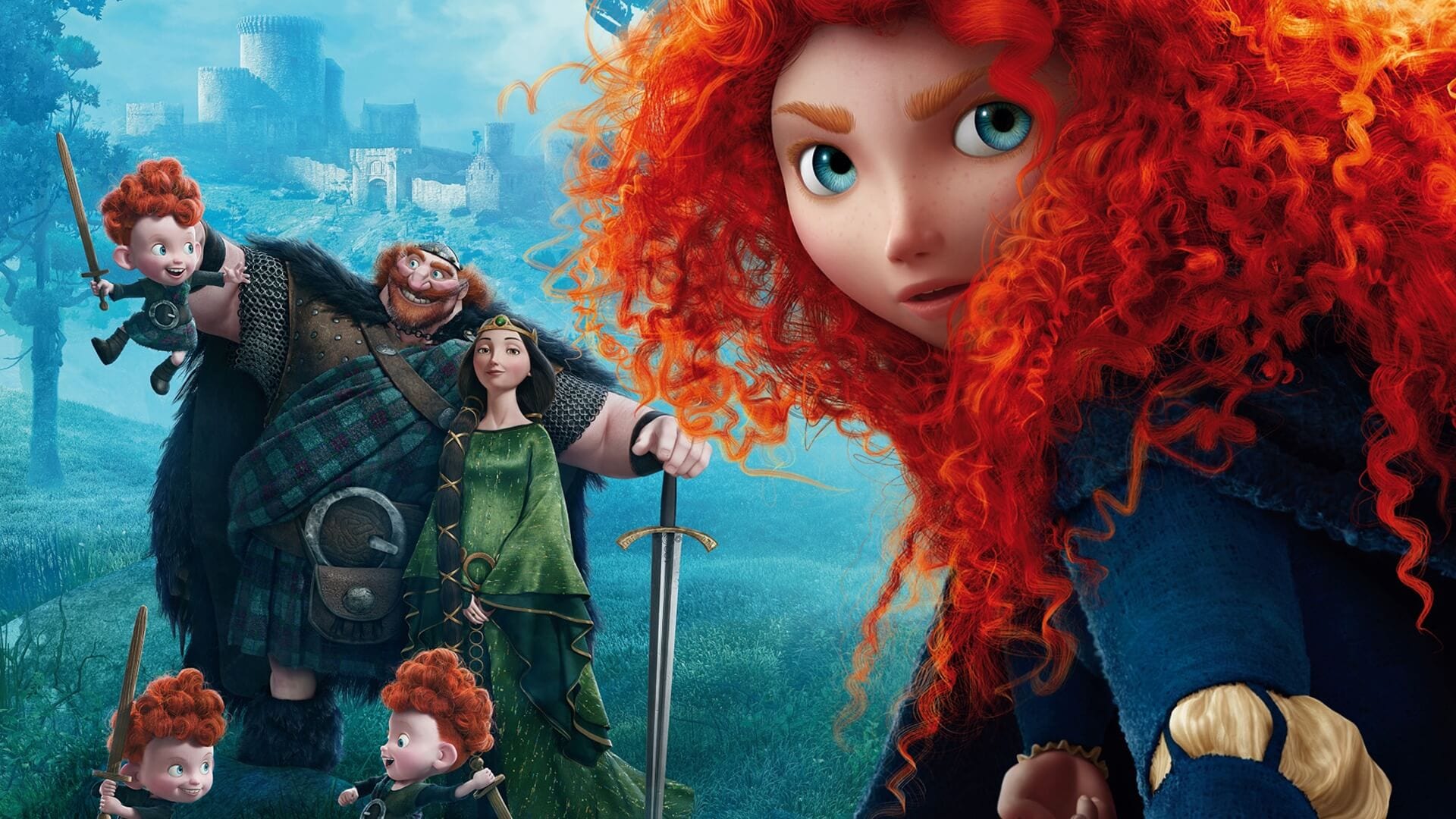 Munir: Hello and welcome to A Decade Of, where we are reviewing Pixar’s past decade in film. Today, we are taking a look at the studio’s first original film of the decade, Brave. Initially titled The Bear and the Bow, Brave was the passion project of director Brenda Chapman before she was unceremoniously fired from the film and replaced by Mark Andrews. Despite the troubled production, Brave earned positive reviews (although not ecstatic ones), and it was seen as something of a rebound for the studio after Cars 2’s tepid reception the year before. The movie was also a box success and won the Academy Award for Best Animated Feature in a very competitive year. This choice was and still is seen as controversial because many people thought that some of the other nominees deserved the award more. Brave is also notable because it was the first Pixar film with a female lead and Pixar’s first fairy tale, a territory that was the dominion of its sister studio Walt Disney Animation Studios. Personally, I like Brave, but I couldn’t say it’s a great film like many of its predecessors. 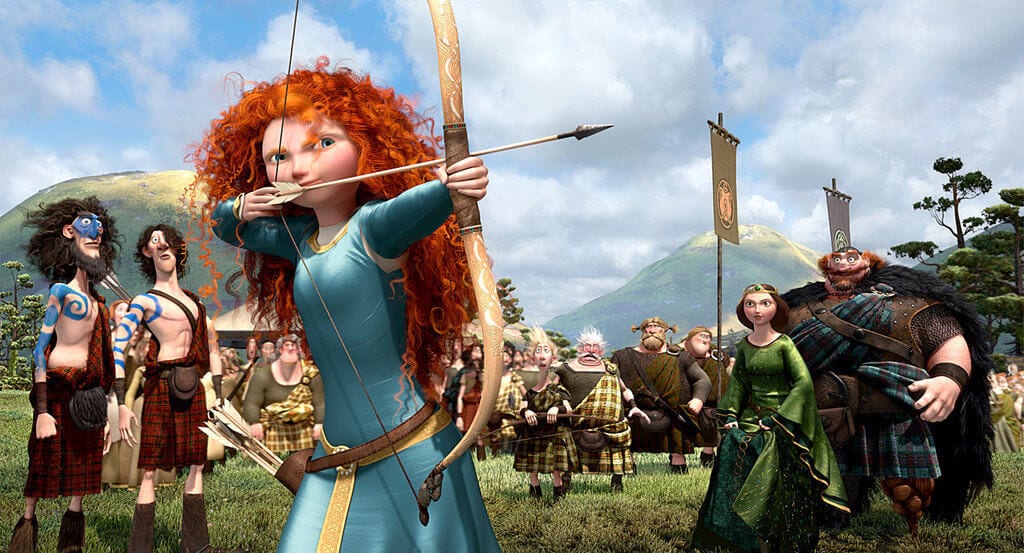 Virginia: I would have to agree that I like the film to an extent, but I don’t think it’s great. I wonder at times if Brave would have been a better final product if Chapman hadn’t been replaced.  We’ve briefly discussed this before, but I really like Merida’s parents, King Fergus and Queen Elinor. I actually like them more than the film’s protagonist because they’re funny, likable, and I love their interactions. Do you have a favorite character in the movie, Munir?

M: I have to say that none of the characters make a big impression, but if I have to choose, it would be Elinor. I don’t agree with her, but I know why she’s doing what she’s doing, and Emma Thompson is perfectly cast as the stern queen. The downside is that when she turns into a bear, she’s played for laughs until the end, and Thompson’s performance is gone. I also like Merida, but I think the filmmakers were trying too hard to make her “feisty, tough and a rebel,” and she can come off as obnoxious and irresponsible. I like her arc in the film, and she grows on me after Elinor’s transformation, but the first act is a little rough. One thing that shouldn’t come as a surprise is that the animation is absolutely stellar. The first time I saw Merida’s hair, it took my breath away. 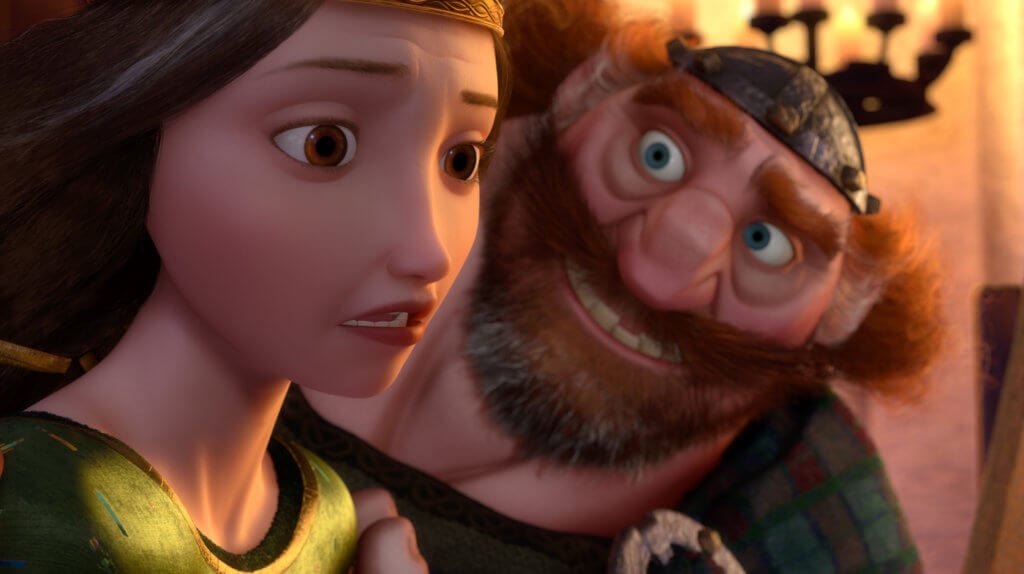 V: I don’t like Merida much at all. She’s one of my least favorite Disney Princesses and Pixar characters. I agree, they were trying too hard to make her tough, probably to appeal to the feminists. And you know what? I remember actress Kelly MacDonald talking about how different Merida was to other princesses, and I have to disagree. She doesn’t want to be a princess, exactly like Jasmine. Merida wants to find her own path, just like Belle, Pocahontas, etc. She doesn’t want to be forced to marry, like Jasmine. I don’t see anything unique about her aside from her appearance, and I don’t even like that much myself. I agree entirely, though, that the animation is of amazing quality. The landscapes in particular are exceptionally beautiful.

M: I agree that she is not that different from previous princesses. The only thing different is that she doesn’t have a love interest. Another gripe I have is that the male characters are really goofy and stupid. I don’t mind them being funny, but I’m bothered that every male character, starting with the king, is portrayed as an idiot. It’s clear that Elinor is the one running the kingdom, and I’m OK with that, but it shouldn’t come at the expense of the other characters. As is, they’re very plain and cartoony. This is painfully obvious with the three suitors; one quick glance and you instantly know that none of them is suited for Merida. I feel like if the filmmakers would’ve made them real characters instead of caricatures, the film’s message would have been more powerful. They could’ve been good candidates, and that didn’t mean that Merida should have stayed with any of them. Unfortunately, as they are in the movie, their only function is to be funny (which they aren’t) because it’s apparent none of them will be picked. 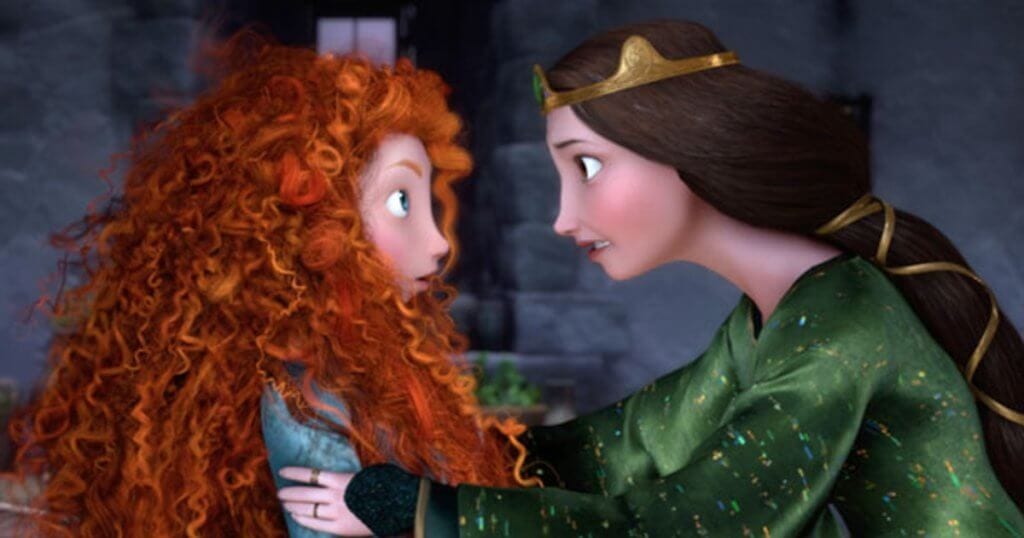 V: I completely agree. I also don’t care for the fathers of the suitors, despite them being played by actors I like Robbie Coltrane and Craig Ferguson. There is even a scene where all of the men are off on a search through the castle, and the central joke is that they use their kilts to build a rope, so you see their butts. Seriously? I can’t believe the geniuses at Pixar thought that was clever or funny somehow. In fact, very little of the comedy in the film does work for me. I like a lot of Fergus’ lines, as I mentioned. However, the other suitors and lords are just jokes, and as you said, caricatures. What a waste.

M: I wonder how much of that was Chapman and what was Andrews. Something leads me to believe that those gags were included under Andrews, but I guess we’ll never know. However, not everything is bad, and there are many scenes that I like. The beginning is quite good and effective. It shows the main characters, their world and the first appearance by Mor’du. It’s suspenseful and compelling. I also like the flashback scene when little Merida is afraid of the storm, and Elinor holds her and sings to her. It’s heartfelt, and it deepens their relationship. The first escape from Mor’du is also quite good, and the scene where Merida speaks to the lords, listens to her mother, and they finally bond is central to the film and, ultimately, what makes it work. Also, unlike Cars 2, there’s an actual plot and a real arc for the protagonist. What do you think?

V: I agree that Merida has a character arc, and Elinor does too, for that matter. However, it would work better for me if it was less one-sided (which I believe it would have been under Chapman) and if Merida was a likable character. However, I do also like the opening scene. I wanted them to do more with Mor’du and the legend of the brothers. I felt like that story wasn’t connected enough with the main story to form a central theme for the film. As an aside, I adore the songs for this movie as performed by Birdie, Mumford and Sons, and more. I think they’re lovely and simple, and always perfect for the film’s tone. The score by Patrick Doyle is also gorgeous.

M: The score is great, and it suits the film and its world perfectly. I also like the songs. I think that Pixar, master world-builders that they are, created a wonderful world full of magic, legend, and mysticism. Unfortunately, the main story has many issues, and it detracts from experiencing the whole thing. I also wanted more Mor’du and more history, but I guess it had to take a back seat in order for the mother-daughter relationship to develop. Now, what do you think about the Oscar win? I have to say that this was the first year that I was not rooting for Pixar. Tim Burton did his best film from this decade with Frankenweenie, Aardman excelled with The Pirates!, Laika created another poignant and spooky classic with ParaNorman, and Disney Animation created a whole video-game world and blew us away with Wreck-It Ralph. I thought that the latter was going to win, and Brave winning felt disappointing, as I thought it was the weakest of the bunch.

V: My favorite of the bunch was Ralph, but I also think ParaNorman was worthy. I don’t really follow the Oscars or consider them important anymore, and decisions like that are part of the reason. Pixar is the obvious choice, but in 2012 they did not make the best film, plain and simple. It’s interesting that Pixar made a movie that seemed like a Disney movie, and vice versa that year.

M: It did feel that way. It’s evident that the Academy is biased towards the Disney Company since only two non-Disney films (Rango and Into the Spider-Verse) have won the Oscar this decade. To be fair, both Pixar and Disney Animation mostly create high-quality movies that are usually above the rest of the competition, but 2012 was not that year for Pixar. So, to sum it up, I find Brave to be good, but it had the potential to be a great film if it didn’t settle for caricatures and created more well-rounded characters. There are a lot of things to like, but also many issues that prevent it from reaching higher. 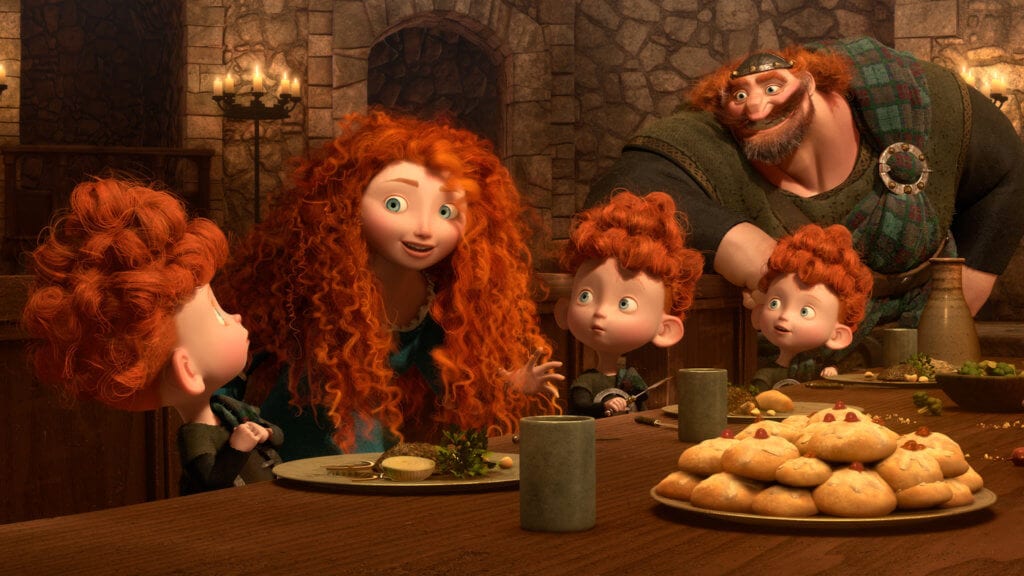 V: I think that’s a fair assessment. The film has grown on me over time, and I love the soundtrack. I also like the voice acting and Merida’s parents. However, I don’t like Merida herself, and the side characters are little fun and no substance. The story itself feels messy and fractured. With a rewrite and maybe without the director replacement, it could have been among the greats.

M: That’s all for today. What do you think of Brave? Let us know in the comments and don’t forget to come back for our review of Pixar’s first (and so far only) prequel, Monsters University.

Brave is a film full of brightly colored costumes, breathtaking landscapes and upbeat music. Some of its characters and relationships could be better developed, but it is an entertaining romp at the end of the day.