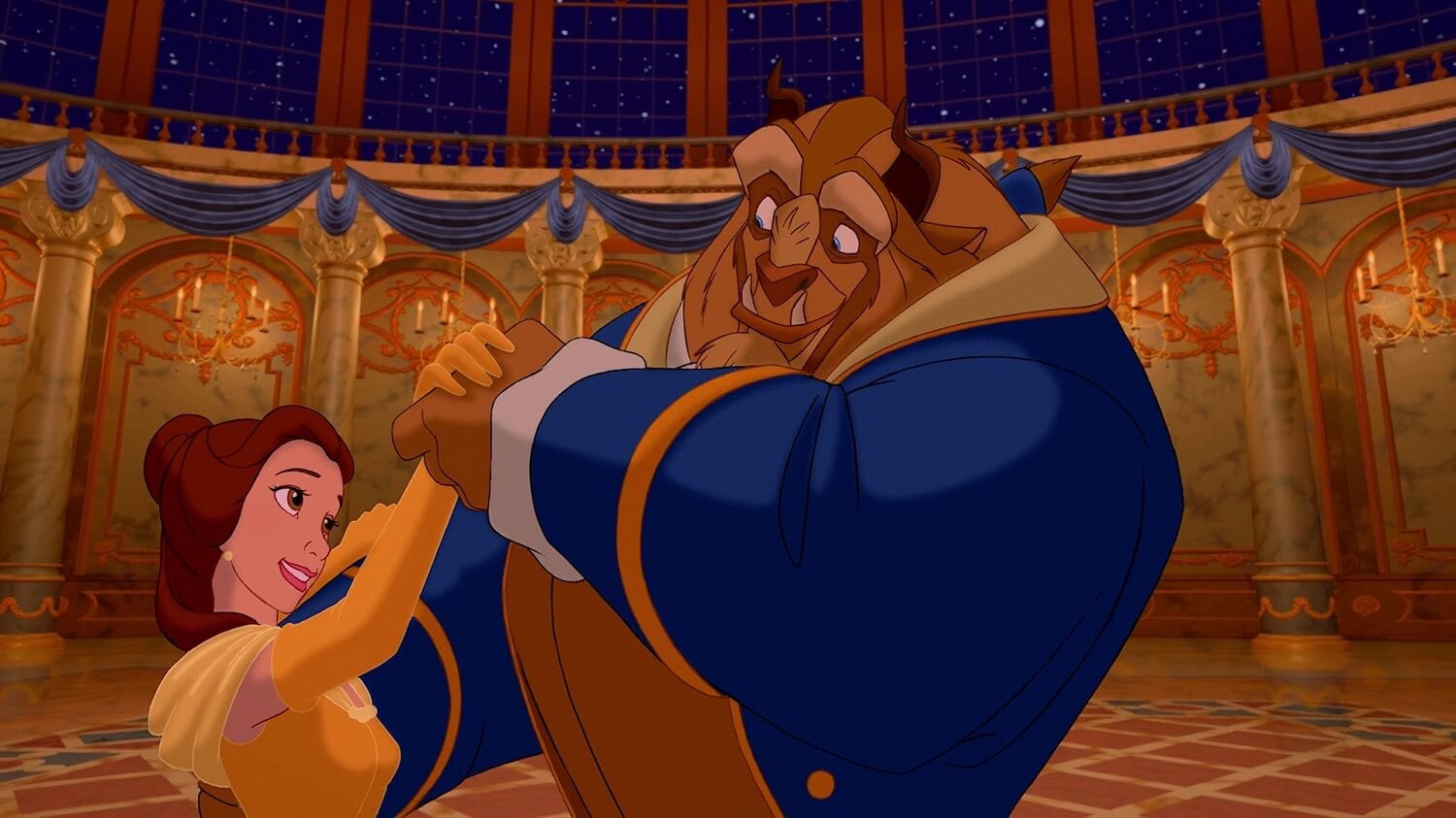 Beauty and the Beast is commonly regarded not only as one of the best Disney films ever made, but as a great cinematic achievement in general. Based on the original novel by Jeanne-Marie Leprince de Beaumont, the film changed several key aspects of the story to differentiate itself from another Disney classic, Cinderella; in the original story and many of the film adaptations, Belle’s father is a merchant rather than an inventor, and she has two selfish and demanding sisters. The function of the rose in the story also shifted: in the original tale, Belle’s father steals a rose from the Beast’s garden as a gift for her, but here it’s a more meaningful plot device. Beauty and the Beast stands out in my mind for many reasons, not the least of which is that, in this case, the changes to the story actually improve it. Tangled is another example of a Disney movie that took a famous tale and improved the story by removing plot holes and giving the characters better motivation. With a lot of Disney’s fairy tales, changes are made to simplify the story or to remove un-family-friendly elements. But here, the characters and story are actually more complex, and it serves as a big improvement. Once a movie becomes this famous and well-regarded, it becomes a part of our society and influences everything from other films to the way people think about cinema. It’s good to look at movies like this critically and question why they had such an impact and why they’re so well remembered.

Beauty and the Beast opens with the iconic stained glass windows depicting the Prince’s backstory and how he became the Beast, along with David Ogden Stiers’ chilling narration. This scene is a good indication of the type of movie Beauty and the Beast wants to be; it’s reminiscent of the storybook openings to films like Snow White and the Seven Dwarfs, Cinderella, Pinocchio and a slew of other Disney classics. But it still has a very distinct look, and the music and narration during this sequence are dark and haunting. It’s a gorgeous, sophisticated way to tell the Beast’s backstory. The next scene, with Belle in her village, seems more traditional Disney, at least on the surface. This sequence has a catchy song, lots of bright colors, and the slapstick with Le Fou. However, the film also uses this scene to cement a unique identity for itself. Sure, the villagers chat about how beautiful Belle is and how handsome Gaston is, but they also mock Belle’s personality and interests. There’s something different about her, and they don’t like that. When Gaston states his intentions to marry Belle, it’s all about how they’re the two most beautiful people in town, and that makes them the best. Not only is he disinterested in Belle’s passions, but he can’t even understand them, asking how she can read a book without pictures. The only person in town as odd or intellectual as Belle is her father, Maurice. Everyone, especially Gaston, believes Maurice is crazy because he’s an inventor and later believes the Beast to be real.

The two storylines converge when Maurice ends up not at the fair as he intended, but in the Beast’s enchanted castle. There, he finds a welcoming staff led by Lumiere, until he’s discovered by the Beast, who has little compassion for an old man lost in the woods. While I love most of the Disney fairy tales, this was the first one to really build up the relationship between the two romantic leads and give it room to breathe. Belle demonstrates her quality by taking her father’s place in the dungeon, and in the same moment we see the Beast’s first sign of humanity: he looks like he’s uncomfortable with the situation, and he feels bad for Belle and her father. He seems genuinely moved by Belle’s determination to free Maurice. However, he sends Maurice away nonetheless and maintains his gruff exterior around Belle. 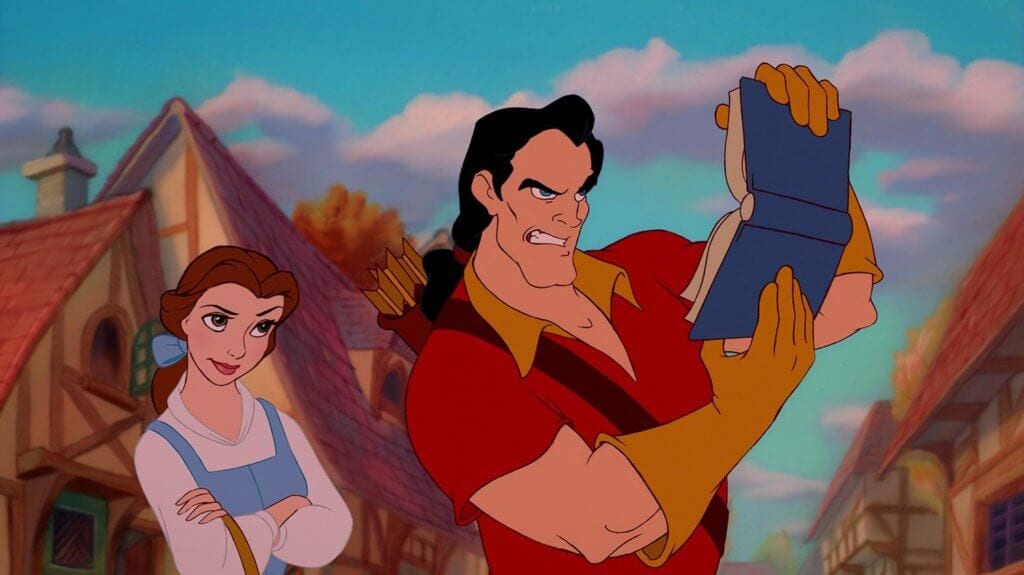 Beauty and the Beast excels at creating atmosphere. The forest is foreboding and dimly lit, colored with lots of grays and dark greens. This stands in stark contrast to the bright colors and warm lighting in Belle’s village. The Beast’s castle is similarly dark and gloomy at first, but Belle’s room has more color and life to it. And throughout the movie, the castle lightens up as the visuals change to suit the emotional state of both Belle and the Beast. Belle and the Beast are also the only characters in the film to wear blue, subtly hinting at their differences from the townsfolk. Gaston is distinct from other Disney villains because, at first, he seems relatively harmless, more of an annoying neighbor than an evil force to be dealt with. Directors Kirk Wise and Gary Trousdale even comment in the audio commentary that, in any other movie, Gaston would be the handsome prince. You can almost imagine Belle coming to understand him, and vice versa, in your usual romance.

The Beast’s role is also an interesting and complicated one. Initially, he’s much more of a threat than Gaston, first imprisoning Maurice and then Belle, and keeping them separated. Once he saves Belle from the wolves and she tends his wounds, he shows signs of becoming more human; he starts wearing shirts and coats again, does his best to eat like a person, and plays with Belle in the snow. Unlike Gaston, the Beast also takes an interest in Belle’s interests, gifting her his library and listening to her read. There’s even a subtle reversal in the casting choices for Gaston and the Beast; Richard White voices Gaston, and he’s a baritone, while Robby Benson, who voices the Beast, has a much higher singing voice. In stage musicals, the hero is usually played by a baritone, with a tenor in the role of the antagonist. While Howard Ashman and Alan Menken had scored the Little Mermaid, Beauty and the Beast best displays their Broadway sensibilities. 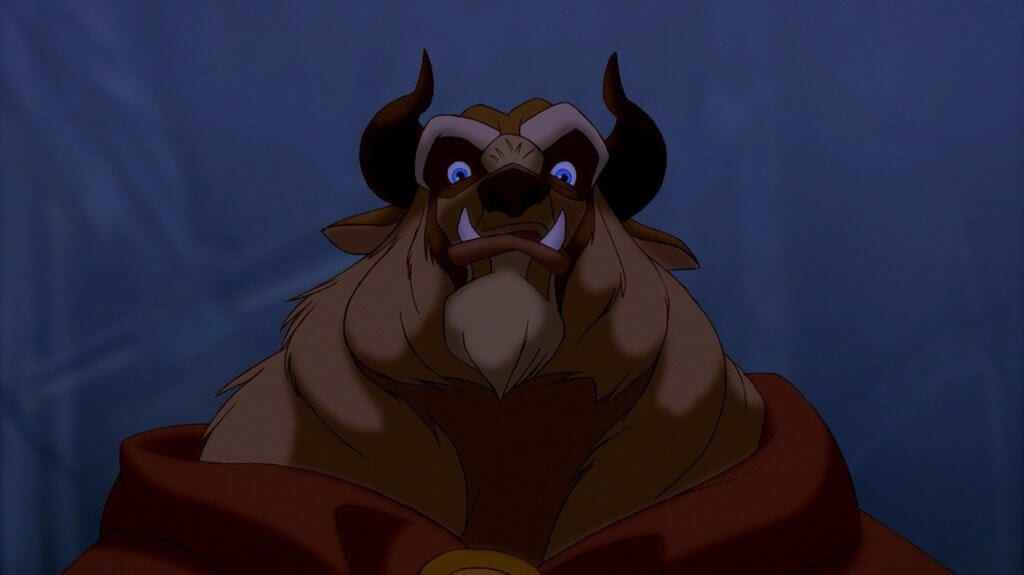 Beauty and the Beast has one of the most sophisticated musical scores not only in Disney history but in any movie I’ve seen. It’s beautiful and ranges from silly and bouncy to slow and introspective. The film’s songs are amazing because, in addition to being catchy and exciting, they advance the plot and inform the character’s thoughts and feelings. I love the songs “Gaston” and “The Mob Song” because they demonstrate so well the people’s idolization of Gaston and willingness to do pretty much whatever he says. “Gaston” is clever and funny, whereas “The Mob Song” is in a minor tone and displays the villager’s prejudices in a more nefarious sense than in the opening number “Belle.” “Be Our Guest” introduces Belle to the castle’s wonders and lightens the mood once she’s first imprisoned. “Something There” and “Beauty and the Beast” might be my personal favorites because they focus on and develop the central relationship between the leads. My one complaint here is more of a wish really: I’ve always thought it would be great if the Beast had a song to himself. He has his part in “Something There,” of course, but he doesn’t get a song about his goals and desires like Belle does. In the Broadway show, Alan Menken gave him “If I Can’t Love Her,” which is pretty much perfect for this purpose. I also wish he had a proper given name, and that Belle had used it at least once. The Beast is the film’s heart and soul, and he’s far and away the most dynamic character. He learns not only the true meaning of love but also of mercy, as evidenced by his decision to let Gaston go rather than exacting revenge on him. The animation on the Beast is incredible as well; the facial expressions on him are stunning and complex, and I love how his movement changes as he becomes more like a human man again. If you’ve read my reviews of Tarzan and Tangled, you know that I consider Glen Keane to be one of Disney’s finest animators of the last couple of decades, and the Beast might be his best work. The transformation scene gives me chills between the animation and the haunting music.

Another reason Beauty and the Beast is so amazing is that all this hard work was completed in half the time normally allotted to a Disney animated film. The creative team involved had different ideas for the movie; screenwriter Linda Woolverton wanted to create a feminist manifesto with Belle at the center, and Howard Ashman wanted more scenes with the Beast as a child to make him more sympathetic. Director Gary Trousdale credits some of the film’s best ideas to the songwriters Menken and Ashman and writer Brenda Chapman. Beauty and the Beast is the best Disney movie, and one of my favorite movies in general. It features one of their most complex protagonists ever, some of the finest music ever put in a film, and lush, gorgeous animation that sticks in the mind long after viewing. All of my complaints with the movie come down to wanting more; wanting to hear more from the Beast, to know his real name, etc. But really, I think this movie is perfect in every practical sense of the word. The 2017 remake proved that this film has everything it needs to tell its story well and make you feel for the characters. It would be strange to recommend Beauty and the Beast because almost everyone has seen it, but that’s because it’s a movie everyone should see.

Beauty and the Beast is the best Disney movie, and one of my favorite movies in general. It features one of their most complex protagonists ever, some of the finest music ever put in a film, and lush, gorgeous animation that sticks in the mind long after viewing. All of my complaints with the movie come down to wanting more; wanting to hear more from the Beast, to know his real name, etc. But really, I think this movie is perfect in every practical sense of the word.