Black Widow vs. The Red Menace 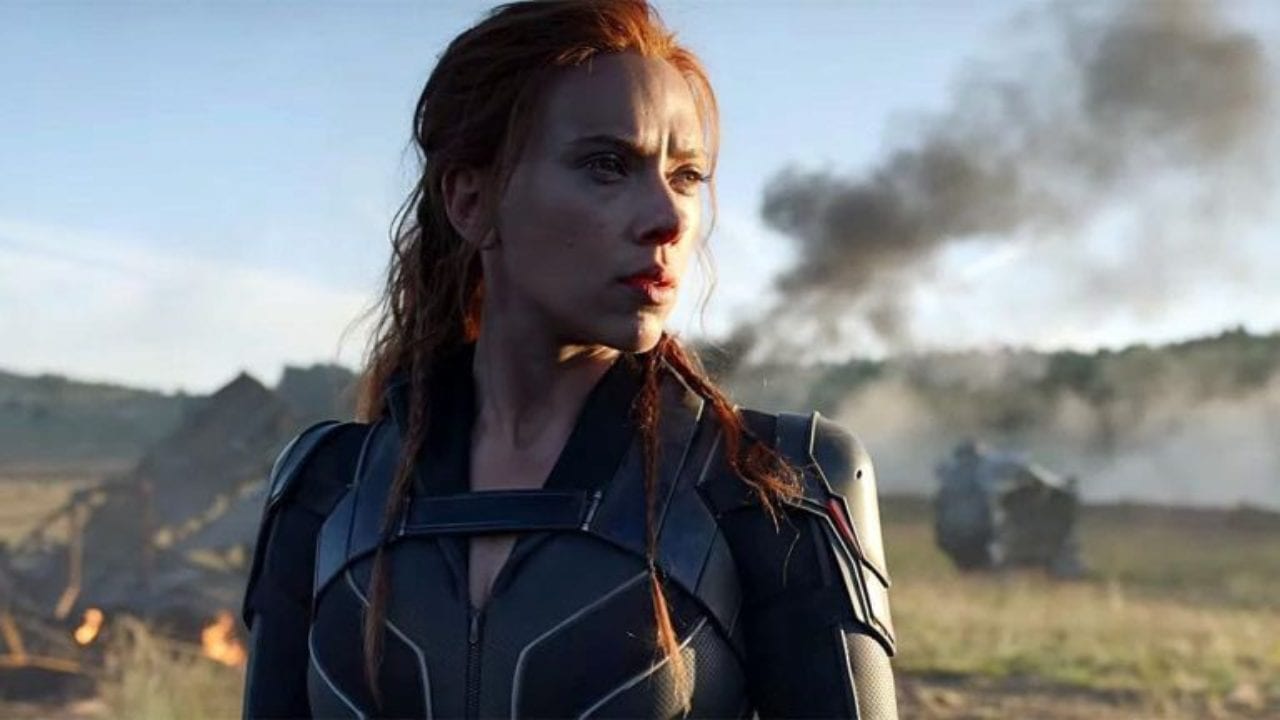 Black Widow has been around for a few days now, both in theaters and on Disney+ (for an extra fee that’s significantly more than the price of a movie ticket even here in New York City), and if the box office is any indication, people are seeing it – and, according to the Rotten Tomatoes audience scores, liking it. If you haven’t caught it yet, my spoiler-free review is on the site. If you have, it’s time to delve a little deeper. After those ridiculous, pot-stirring early reviews and Scarlett Johansson whining about playing a femme fatale who was portrayed as a femme fatale, everyone’s biggest fear was that this movie would go woke, with Natasha suddenly on a holy mission to smash the patriarchy. Thankfully, that isn’t the case. Instead, Black Widow shows a much better – and, frankly, more timely – institution as the root of all evil: communism.

In the comics, Natasha Romanoff is a product of the Cold War, a Russian spy who defected to the West after a brief stint as a villain. However, the Marvel Cinematic Universe didn’t start until 2008, so a Cold War story is a bit hard to fold into the continuity; for example, the Winter Soldier’s brainwashers were changed from the Soviets to Hydra. But Natasha remained a Russian operative in the movie world, with the details of her dark past kept vague, including the nature of her former masters, aside from their being at least some element of the Russian government. This far after the fall of the USSR, could communism still be a force in her backstory? Black Widow says it can, and it does so subtly – as much out of necessity as artistry, as Disney is determined to sell these films in China. They actually never say the word out loud, as far as I can recall. And yet, communism is all over this movie, and it’s portrayed as an insidious evil that corrupts even those with the best of intentions.

As the movie reveals her past, we learn that Natasha was part of a fake family sent to spy on America, and after that, was inducted into the Black Widow program. From the start, she was run by General Dreykov, a hardline Cold Warrior who walked in powerful circles and ran his spies with ruthless efficiency. Dreykov is a guy who never left the Cold War behind, and when his government moved on, he developed a sort of shadow government, using his remaining Black Widows to act as his intelligence gatherers and executioners. While his ideology lost the Cold War, he’s been biding his time, marshaling his forces, and spreading the rot of communism throughout various nations, just waiting for the perfect moment to strike at a world that left him behind. 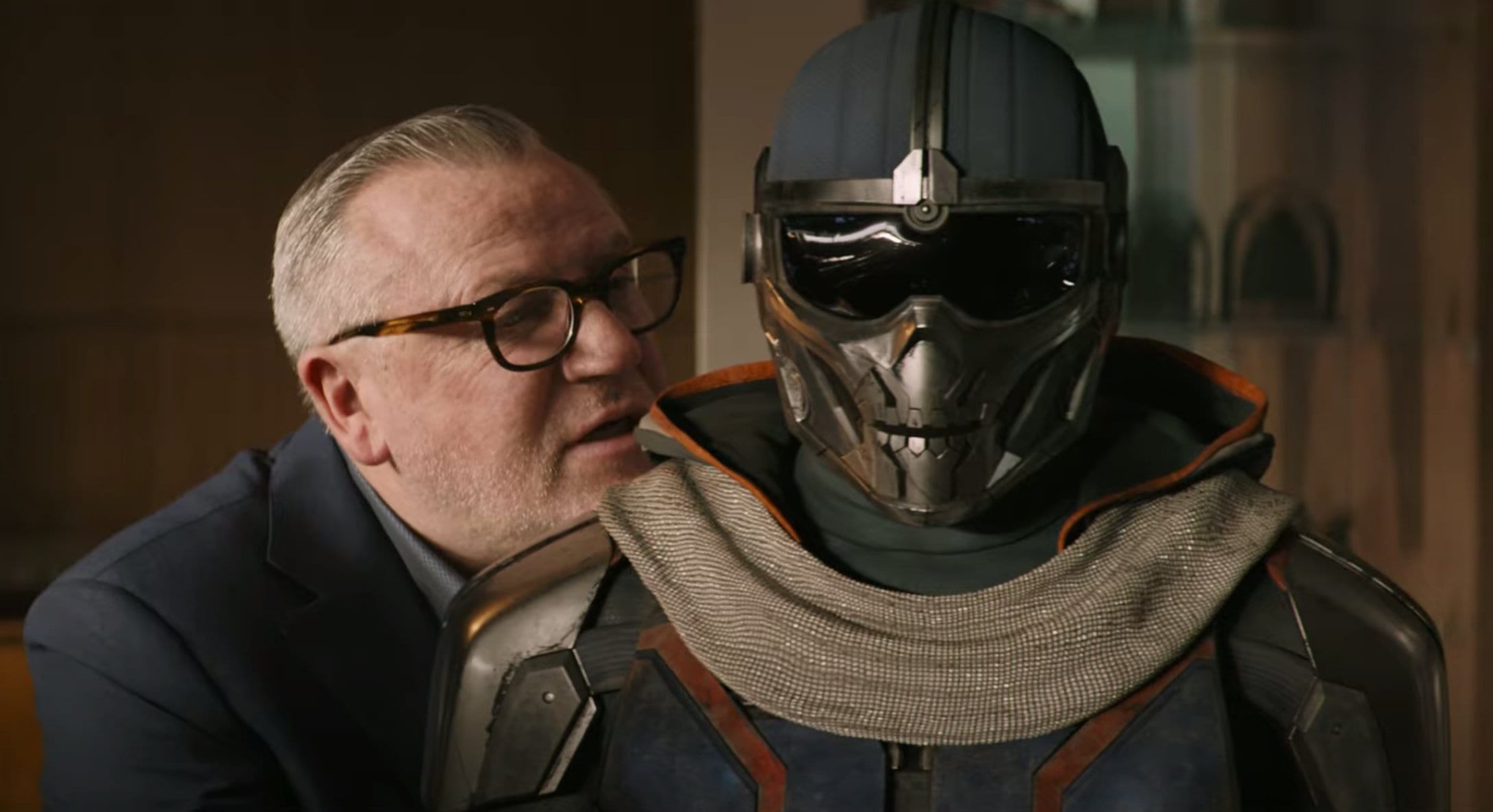 The way Dreykov spreads his influence is telling as well; instead of working to recruit willing agents, he brainwashes them into complete subservience, not allowing them to choose not to follow him. (You could go so far as to say competing arguments have been de-platformed for his targets.) Here, communism is a literal mind virus; in the absence of official power, Dreykov has turned his political philosophy into a violent cult, taking innocent women and forcing them to be his killers. And, as with all cults, the worst thing one can be is an apostate; when a cure for the brainwashing materializes, Dreykov immediately has anyone set free from his spell hunted down and eliminated. Communism only works for its purveyors when they maintain complete control over their subjects – otherwise, you get people like Natasha, who throw the chains off their programming and see monsters like Dreykov for who they really are.

It’s those like Natasha, who were drawn into communism without the brainwashing, who are the most interesting. In her and her manufactured family, the complexities of a person inducted into an ideology who still holds onto their free will are explored. Natasha herself is a killer who carries the weight of her crimes with her every day. Her surrogate father, Alexei, was given great power and filled his head with dreams of being the Soviet answer to Captain America, but was relegated to play-acting as a suburban dad instead. When he insisted that he had more to offer, Dreykov had him locked away in a prison, fearing someone who wasn’t completely under his control, no matter how loyal Alexei was. Under communism, aspiration is crushed, and a man’s potential is inconsequential if it doesn’t fit the needs of those who rule the state. The family’s “mother,” Melina, is a talented scientist who developed revolutionary mind-control methods but is stuck on a farm in the middle of nowhere performing experiments on pigs. Her potential is likewise squandered, her existence a degradation that diminishes her brilliant mind. Sure, Dreykov gets the benefits of her work, but she’s still stuck in a shack with livestock as company. All are victims of communism, forced into lives of regret. 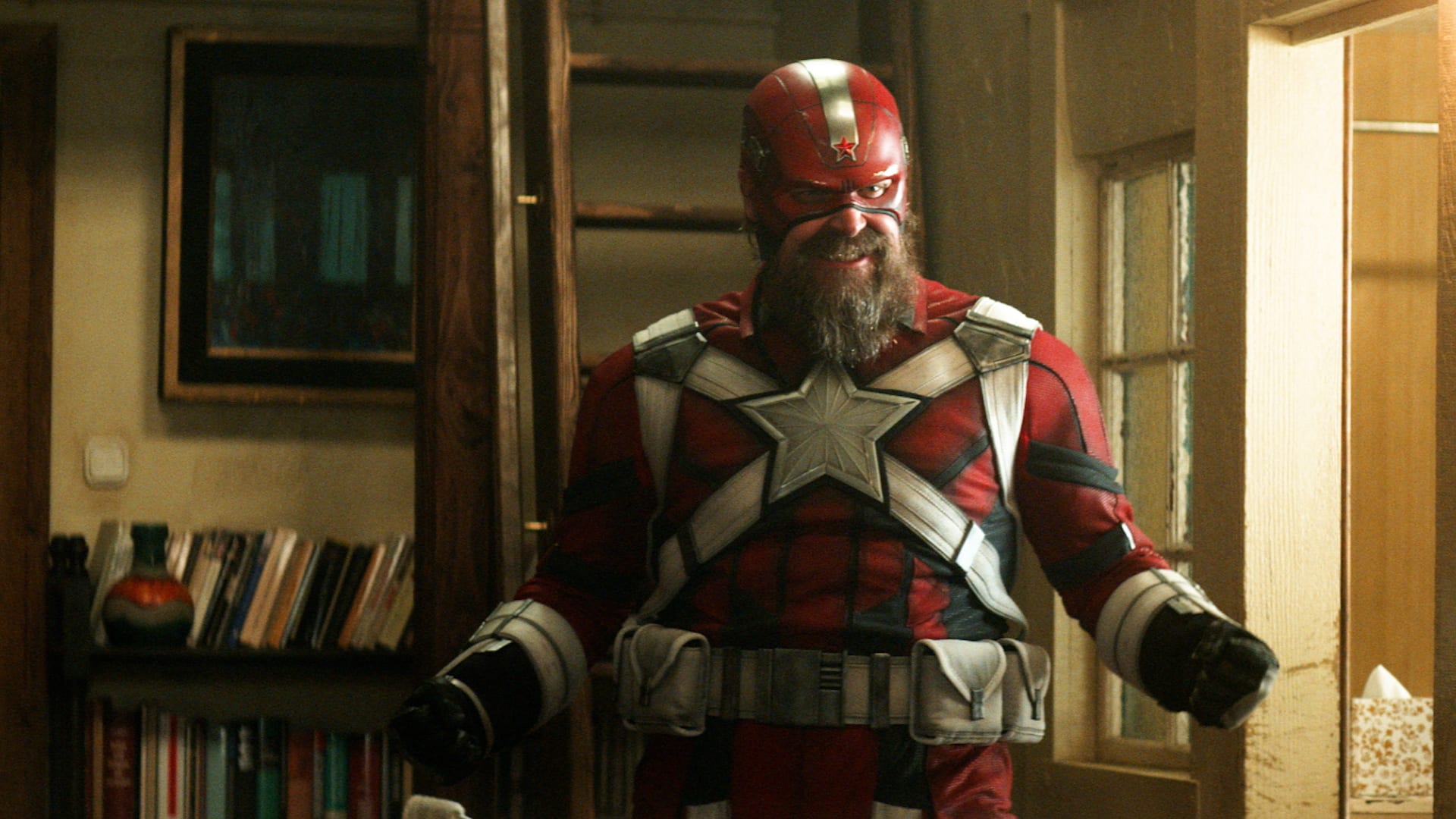 At the same time, they’ve all done evil things in service to communism, and they don’t have the excuse of being brainwashed. There’s no telling how many people Natasha killed on Dreykov’s orders, and even when she defected, she chose to murder a child rather than scrap a mission. (That her victim is a little girl fits into the narrative of Dreykov – and communism through him – taking away her ability to give life and leaving her a killer, as she told Bruce Banner in Age of Ultron; she is a monster, and her evolution throughout the MCU becomes even stronger after watching this scene in Black Widow.) Alexei, who became a father to Natasha and her assigned sister, Yelena, readily hands the girls over to Dreykov for the Black Widow program, damning these children to a lifetime of servitude to an evil empire, albeit a truncated version of one. Melina is complicit in this as well, and when the girls find their way back to her years later, she alerts Dreykov before they even speak a word, so complete is her loyalty to her overlord. These are all despicably evil things, and while each of these people is guilty of their own choices, the rot in their souls comes straight from communism.

The three of them – four, if you count brainwashed Yelena and her almost-sacrifice – find their redemptions in Black Widow, and they do it by turning on the communism that made them monsters. Natasha not only helps set the rest of the brainwashed girls free, but she’s afforded the opportunity to save the girl she thought she’d killed, to wipe a different kind of red from her ledger. She escaped, and now, thanks to her, Antonia can too, along with the many girls all over the world who will never even know how close they came to slavery. Melina turns on Dreykov before his forces arrive at her farm, allowing herself to be taken prisoner so Natasha can have the chance to stop Dreykov and undo what Melina spent a lifetime helping to perfect. For the first time, she’s allowed to act like the mother Dreykov prevented her from being and put herself at risk for her kids. And Alexei dons the costume of the Red Guardian, the great Soviet hope, but uses it to help destroy the system that gave birth to it. (Here, I have to agree with Jeremy Jahns; Alexei needed a big hero moment in the finale, something more than just tussling with Taskmaster.) 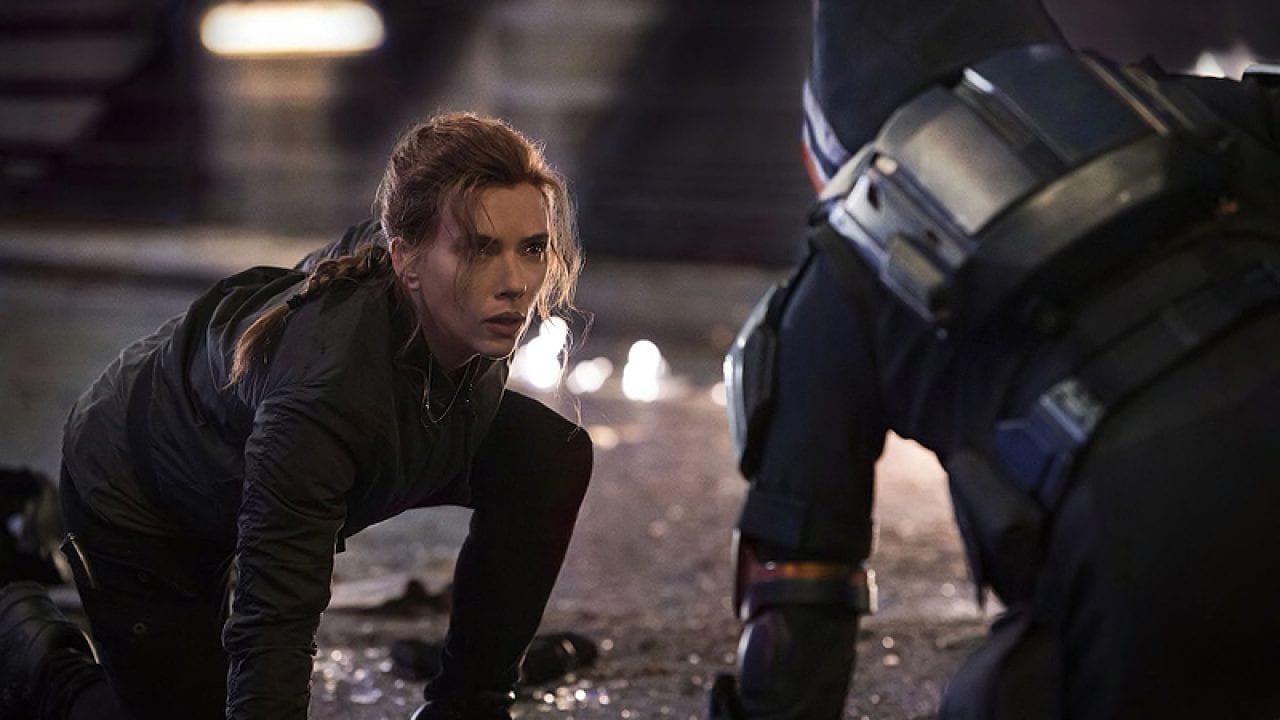 That the film’s finger is pointed squarely at communism can also be seen in the comparisons drawn to America. The opening scene is the thickest slice of apple pie Americana since Ward Cleaver last walked through a white picket fence. The four main characters look like a happy, well-adjusted family, enjoying the summer and all the fun it brings as any Americans would. As grown-ups, Natasha and Yelena look on these memories with wistfulness for a world they wish was true but know in their hearts was a lie. Natasha is now living the American Dream, so much so that this former enemy of the West is an Avenger, working side by side with the personification of American freedom, who is now one of her best friends. Yelena never had that chance, and she resents Natasha for leaving her behind in her Soviet hell while she flourished in the land of plenty. The home videos they find at Melina’s farm invoke the happy memories of the life they thought they could have, one where they celebrated Christmas, Easter, and Independence Day. Like everything else about their childhood, though, those memories are dashed when Melina tells them that the videos were all made on the same day to economically falsify all the major American holidays. Alexei’s imagined rivalry with Captain America is a mask for his envy of him; his own state never respected him the way America did Steve Rogers, and ultimately, that respect is what he wants. But perhaps the biggest piece of evidence is Yelena’s favorite song, the one that cheers her up when she’s sad and calms her when she’s scared, the one thing that keeps her tied to the fake family the communists assigned to her: Don McLean’s “American Pie.” At least in this pocket of the Marvel Universe, America is still the Dream.

But this is just my reading. Others are seeing things in Black Widow other than a finger in the eye of communism; check out the WorldClassBullshitters episode that talks about the film for one such. However, I like this one; it reminds me of the older phases of the MCU, which allowed subtlety and even some pro-America messages in their movies. There are a lot of things I like about Black Widow, but this may be a big part of why I love it.