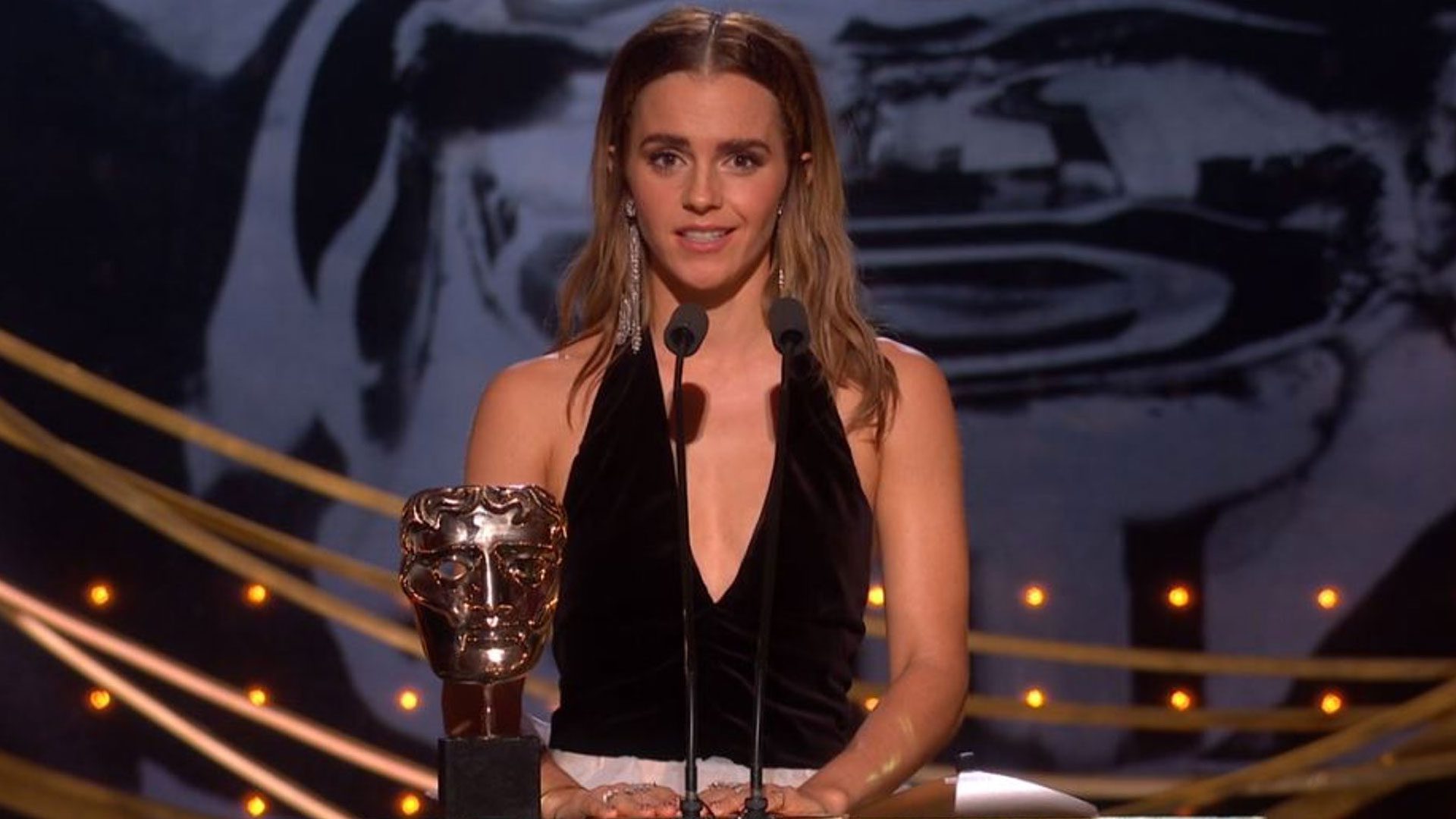 Emma Watson is on her way to completely alienating Harry Potter author J.K. Rowling. Emma had previously played Harry Potter’s best friend and witch, Hermione Granger, for ten years. Rowling approved of Emma as Hermione from day one and gave Emma a career. Without Rowling, Emma Watson would be a nobody; it’s almost as if Emma is biting the hand that feeds her.

But it appears that Emma has not realized this as she yet again slighted her former friend and mentor, J.K. Rowling. The BAFTAs took place this past weekend, and after a two-year hiatus (of the event), the woke mob, also known as celebrities, came out in full force.

Australian actress Rebel Wilson was the first to throw stones at J.K. Rowling, talking about her (Rebel’s) drastic weight loss. Rebel previously hosted the BAFTAs in 2020 and referred to her 2020 photo whilst saying, “That was me two years ago and since then I’ve done quite a transformation – I hope J.K. Rowling still approves.”

The dig was because Rowling has stated that trans women are not equivalent to biological women.

But the smack-down against Rowling didn’t end there! Emma presented an award for “Best Outstanding British Film.” Upon walking on stage, Rebel said, “Here to present the next award is Emma Watson. She calls herself a feminist, but we all know she’s a witch.”

Emma then advanced to the podium and said into the microphone, “I’m here for all the witches, okay.” She then smirked, laughed, and terribly read the teleprompter as if she had never seen words before. Maybe there was no teleprompter, and she was remembering off the top of her head. I’m going to assume it was nerves, as she was reading in front of a couple hundred people. Either way, she was a bit incoherent.

I’ve said it once, and I’ll say it again… I’ve disagreed with J.K. Rowling’s opinions in the past, but on this topic, I wholeheartedly agree with her. Biological men cannot and never will be biological women. It is just factually and scientifically impossible.

It’s impressive because Jo, at one point, was part of the “woke mob,” but because she disagrees with them on one topic, she gets alienated. I’ve noticed that not a single celebrity has come out to praise her for donating up to one million pounds to aid Ukrainian children via her charity Lumos. It’s ironic considering everyone was dressed in black at the BAFTAs to somehow show solidarity with Ukraine. That will show Putin who is boss! Clothing changes everything!

Emma’s actions are disheartening to me on a personal level. Being six years younger than Emma, I idolized her growing up. I wanted to be just like her; talk like she did, dress like she did, and act just like her. She even got all of her A-levels whilst filming! She had brains and a good work ethic. The saying “Never meet your heroes” applies to my scenario.

It’s also hypocritical on Emma’s part, considering she preaches about climate change but then rents a private boat to take her and her friend to the beach in Barbados. She always seems to be traveling. Notice that the man steering the boat (in the photos) has to wear a face mask – outside, on water.

Just think how much electricity and environmental resources went into powering the BAFTA event! Not to mention the airplanes that transported a lot of these celebrities.

Emma also tells anyone who will listen that she is a feminist (just check out her Instagram). But she has yet to speak out on trans women competing in women’s sports, beating all biological women, and removing their possibility of winning scholarships and awards. Wouldn’t a “real” feminist be outraged? But we aren’t supposed to think of these things, so shh!

Additionally, Emma was part of the “Times Up” movement that was quietly terminated for allegedly covering up Andrew Cuomo’s sexual harassment scandal.

Perhaps Emma and Jo have a great relationship behind the scenes and are still friends. It’s possible but hard to imagine when Emma has come out and said she did not support Rowling’s views but DID NOT condemn people sending Jo hate notes, death threats, and even rape threats. As Rowling put it, “Perhaps – and I’m just throwing this out there – the best way to prove your movement isn’t a threat to women, is to stop stalking, harassing and threatening us.”

I’ve now received so many death threats I could paper the house with them, and I haven’t stopped speaking out. Perhaps – and I’m just throwing this out there – the best way to prove your movement isn’t a threat to women, is to stop stalking, harassing and threatening us. 8/X

Hardly any of the Wizarding World cast has; only a few. Fantastic Beasts star Eddie Redmayne (Newt Scamander) has publicly said he disagrees with Jo but is appalled by the backlash she has received. Robbie Coltrane (Rubeus Hagrid in Harry Potter) has also defended Jo.

It isn’t as though Emma has had a slew of blockbuster hits after Harry Potter, or won many awards. I enjoyed her work in The Perks of Being A Wallflower and Ballet Shoes, but Disney’s live-action Beauty and the Beast was absolutely abysmal. It was incredibly long, with a bunch of unnecessary scenes added. Not to mention the fact that Emma CANNOT sing, and it was incredibly obvious that auto-tune was used. She was solely there to bring in viewers. I have no interest in watching the remake of Little Women.

It makes it very difficult for Wizarding World fans such as myself to support Emma when she’s constantly trying to alienate half of her fan base. I think I will always admire Emma for bringing Hermione to life, as she was my absolute favorite growing up. I just need to, yet again, separate the actor from the character, like the vast majority of celebrities these days, or else I won’t be able to watch any show or movie!

Celebrities need to realize that they are solely famous for entertainment, not to preach to us “mere mortals.” J.K. Rowling has accomplished so much and given so many people hope. How many people can say they inspired a generation, millions of children worldwide, to read? These celebrities have done absolutely nothing in comparison. Thanks, social media, you’re ruining everything!

And here I thought you knew squat about Harry Potter!

Great article. Team Rowling. And no, Emma Watson is not that great at acting but I would still recommend Little Women. Just a really great adaptation imo with most of the leads perfect in their roles

Thank you!
Whilst I’m sure Little Women is good, I just don’t have an interest watching a remake of a remake… of a remake!

Watson wouldn’t be famous without J.K Rowlings. Talk about biting the hand that feeds you.