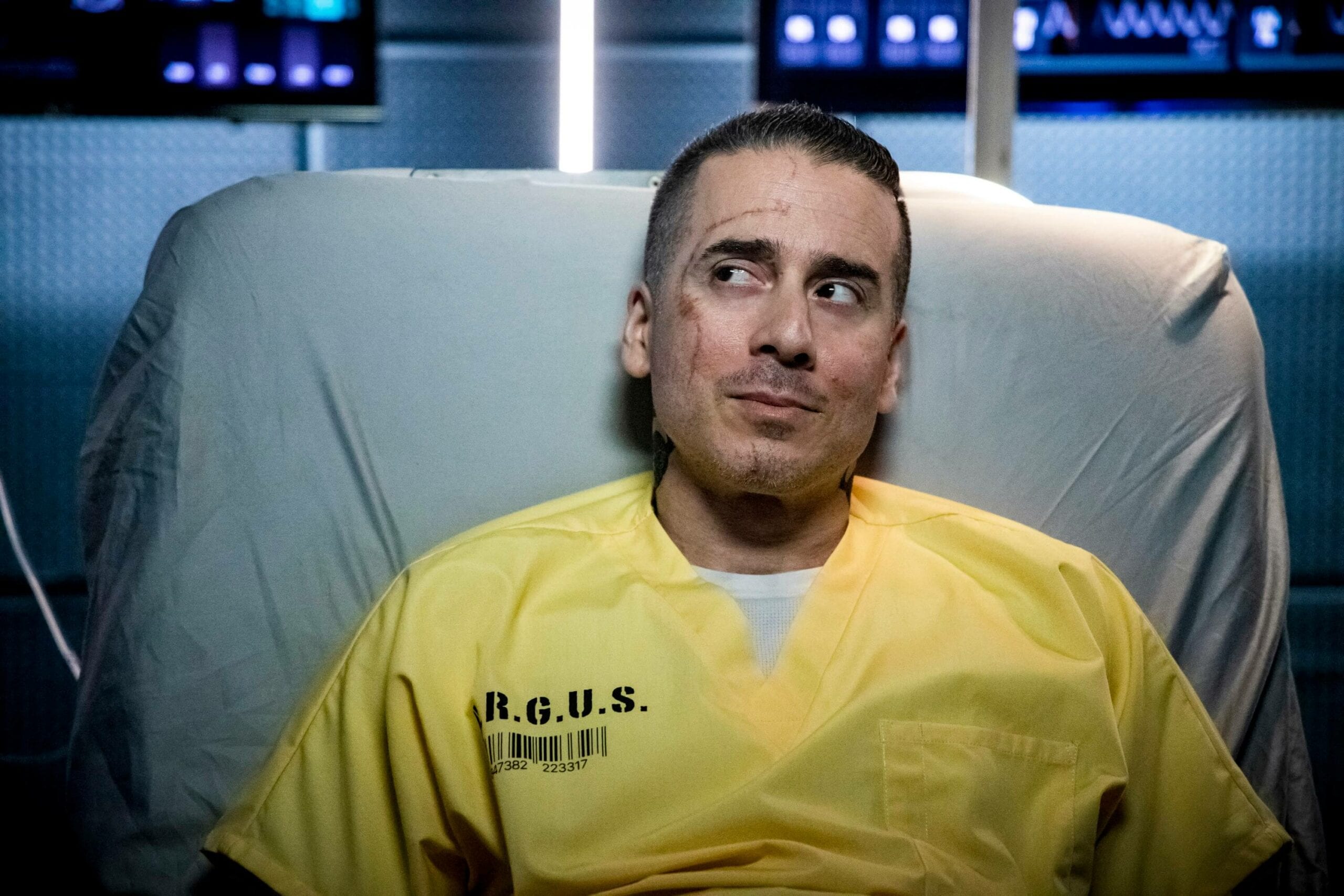 Histories are brought to bear in this week’s episode of Arrow, “Past Sins.” Two separate stories are being told through the eyes of characters who have past transgressions that are beginning to catch up with them. On the one hand, we have Oliver dealing with his father’s sin of murdering his bodyguard in an effort to give his son a fighting chance at survival. Enter Samuel Hackett, son of said bodyguard, who upon gaining access to the information elicited by Dr. Wannabe Hugo Strange from Oliver’s stay in Slabside, learned of the events that Ollie had revealed to the Not-So-Good Doctor and began taking steps to enact his revenge upon the Queen family, with the end goal of killing Oliver. His crusade starts with the kidnapping of a news anchor who had just interviewed the vigilante-turned-mayor-turned-vigilante-cop (it’s comics, man…) and luring the now-Blue Green Arrow into the open. His plan eventually takes him to Star City PD, which he attacks directly, holding the officers responsible for perpetuating Oliver Queen’s lies and threatening to kill everyone if they don’t hand him over. Thankfully, Ollie steps in to de-escalate the situation by admitting the truth of what happened to Samuel’s father while Dinah manages to restore power to the police station, giving them the chance they need to shut down the would-be murderer.

“Past Sins” also has Earth-2 Laurel fighting with a demon from her own past when she runs into a drunkard at a restaurant. That demon comes in the form of a man named Brett Collins – who she reveals to Felicity to be the drunk driver who killed her father on her earth. Felicity, who does double detective duty in this episode by helping Oliver discover the identity of the kidnapper by contacting Cisco of Team Flash to check in on Earth-Two for more information about the aforementioned cop killer. Laurel continues to show growth, both performance-wise and in the story, through her relation to the other characters, and her scenes with Felicity do a great job of showcasing her struggle to be better while opening up and relying on others. Earlier on, after their shared television interview, Oliver mentions to Felicity that he may even be growing to like her. Me too, Ollie. Me too. Katie Cassidy and Emily Bett Rickards continue to have great on-screen chemistry that is not only compelling in its character growth for Felicity and Laurel, but is also equally successful in diverting us away from more Oliver/Felicity drama. That said, between last week’s and this week’s episodes, we appear to be moving away from that concept (and, quite honestly, that’s what needs to happen) and instead shift to a greater emphasis on stronger character arcs – hallelujah!

The surprise arc of the week comes in the form of Curtis wrestling with John and Layla’s decision to bring the Ghost Initiative back online. Seeing this as merely a rebranding of the Suicide Squad, Curtis makes his feelings on the matter known, but placates his A.R.G.U.S. superiors by agreeing to run a diagnostic check on the explosive implants inside the villains’ craniums. He struggles to reconcile himself with the fact that even these horrible people could be used in a disposable manner, and the continued chiding and taunting he receives from Ricardo Diaz doesn’t help his concentration. I won’t spoil what happens with this particular plot thread, but I had my first real moment of respect for Curtis this season with this, at least to a degree. The greater focus of “Past Sins” is on this season’s overarching theme of redemption, something which Oliver is adamant to earn with his recently revealed half-sister Emiko by convincing her that he is not his father, Robert Queen. Stephen Amell’s performance in this family matter is a new angle on Oliver, and the pain and anger that he is feeling over what his father did to Emiko and her mother are visible not just in his face or voice, but most importantly in his eyes, which sell the emotions all the more. Sea Shimooka also delivers a markedly improved performance over last week’s; Emiko’s lines are far less flat than they were in “My Name is Emiko Queen,” and you could see her struggling to convey the emotions of the character as well. 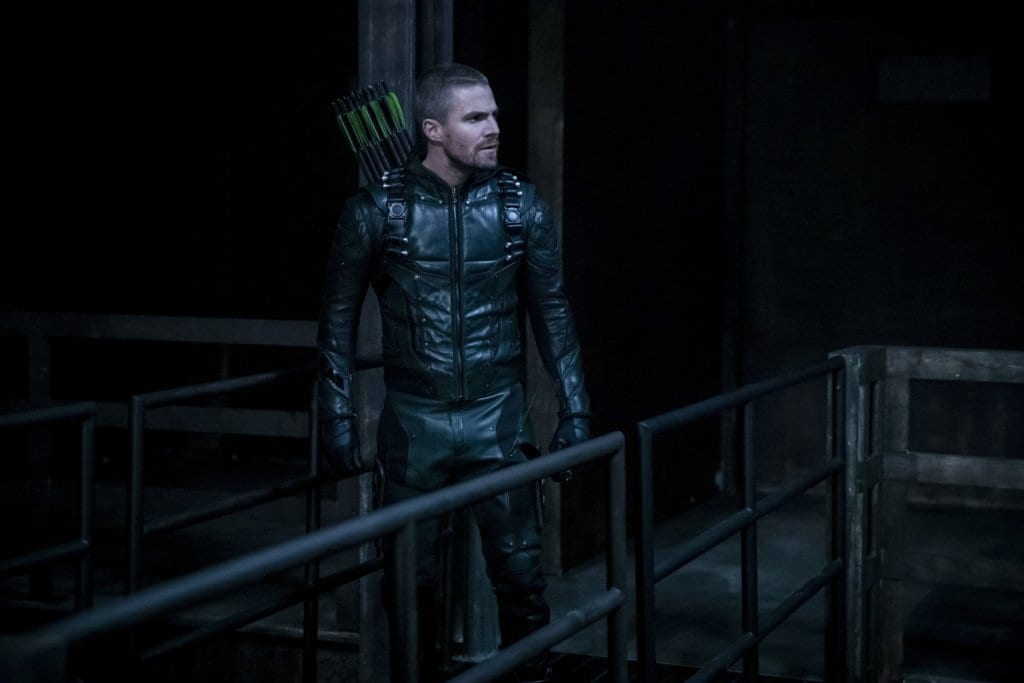 The emotional growth of the characters is great in “Past Sins,” but I’m beginning to have a serious itch for real Green Arrow action – something we’ve really yet to see since the big brawl in Slabside. Additionally, the information gleaned by A.R.G.U.S. should prove interesting as, with Diaz in lock-up at the black site facility, we still don’t know who this season’s villain is. We can surmise it to be this mysterious “Dante” we’ve begun hearing about as of late, but with season seven is creeping up on its mid-point, we’re left wondering if we’ll feel like the villain got enough exposure or not; time will tell. As I’ve stated in previous week’s reviews, this season is shaping up to be great with regards to character development. After this week’s episode, however, my concern has shifted to whether or not we will have a compelling villain and enough time to truly build an audience-character relationship with him by the season’s close; I’d rather avoid another cliffhanger ending if at all possible. Where does Arrow go from here? “Past Sins” continues to feature strong performances all around, but the action is sorely lacking, and, let’s be honest, we all want to see Oliver kicking some serious villainous tuckus in green again. At this point in the season, I feel the writers need to find the right balance between the more subtle notes of character development and the high-flying action that we’ve come to associate with our hooded hero. They’ve taken a beat (or three) to set up a number of individual arcs, but we don’t yet know where the season is going as a complete machine. Perhaps Arrow’s and The Flash’s writers are hanging out for weekend writing sessions.

Standout performances by a few of the primary cast keep this episode on-track and entertaining. Character development and individual plot threads are on point, but with little-to-no action and still no main villain in sight, I'm left wondering if we're going to fall apart at the end.