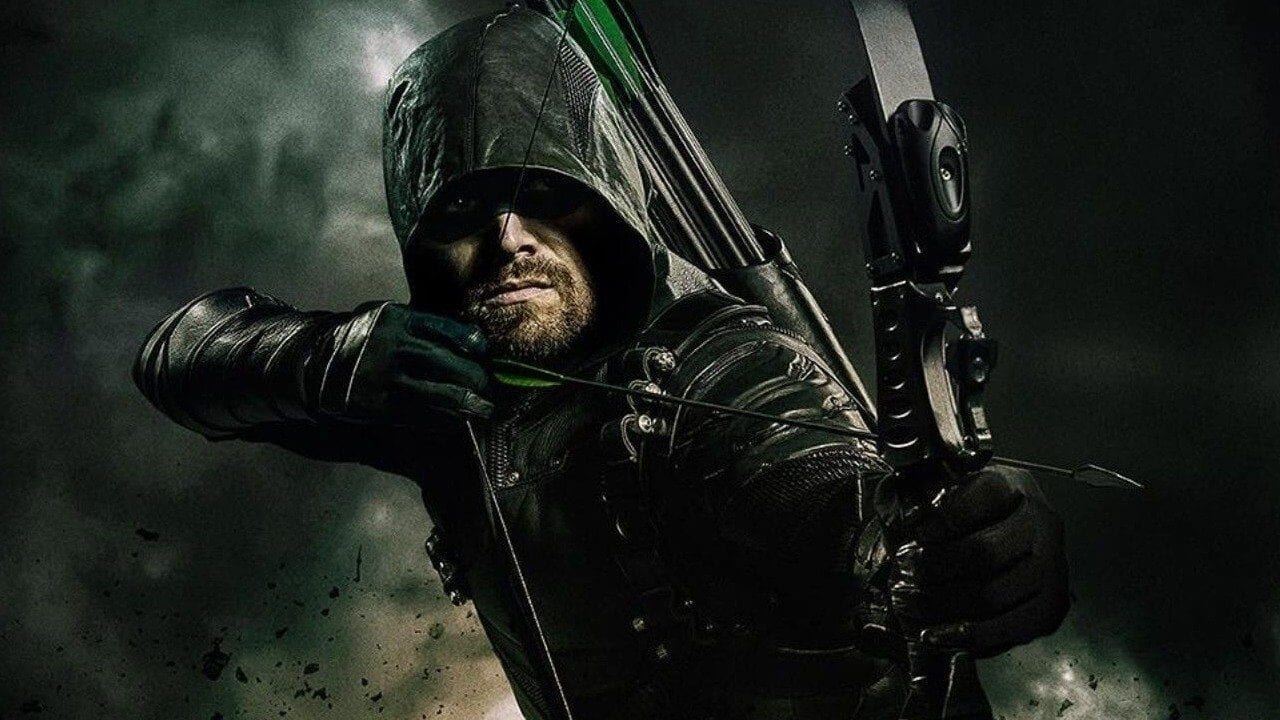 The title of season 7’s second episode harkens back to a 1987 Prestige format, 3-issue mini-series by DC Comics. The Longbow Hunters, written and illustrated by Mike Grell, follows Oliver Queen as he moves from Star City to Seattle, Washington, and tracks down a serial killer by the name of “the Seattle Slasher,” and involves a secretive sect of assassins. The similarities between that story and this week’s CW Arrow episode end with the title. Picking up where the season premiere left off, with Oliver incarcerated, “The Longbow Hunters” finds him just getting out of solitary confinement following the royal beating he handed a few of his fellow inmates at the end of the first episode. Oliver is determined to obtain any information on Diaz as possible, even while imprisoned, so he enlists the aid of a fellow inmate to be his eyes and ears and learns that one of his former baddies, Danny Brickwell, may have some information on the whereabouts of the gangster-at-large. While Ollie sets his sights on information gathering, the former members of Team Arrow, Felicity, Diggle, Dinah, Rene, and Curtis, all meet up and resolve a joint effort to track down Ricardo Diaz and bring him to justice, not only as recompense for his attack on Felicity and William in their home, but because as long as he roams free, Oliver has no chance of getting out of jail. 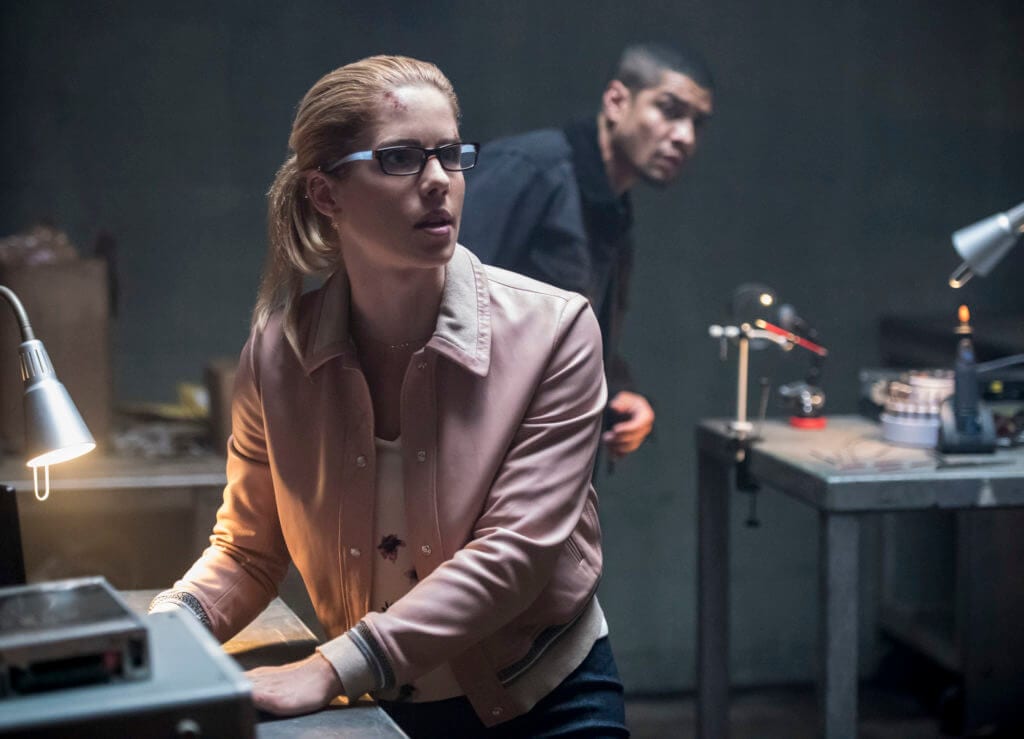 As mentioned above, the title of the episode refers to a group of mythical assassins known as the Longbow Hunters. Three of these assassins are introduced in the episode and go by the names Red Dart, Kodiak, and Silencer. Each of these highly trained and deadly operatives possesses their own unique equipment which they specialize in to complete their mission, as seen in the opening of the episode when they break into an ARGUS off-grid bunker and steal a renewable energy battery with enough energy to power an entire town. Naturally, cheaper heating bills in the winter are far from the extent of the battery’s utility, and it isn’t long before we learn that it also had a remote activator designed for it with military application in mind, when Felicity, Rene, and Curtis foul up an ARGUS operation intent on gathering intel on Diaz. This, of course, means it’s a bomb. A big bomb. One that Ricardo Diaz and his Longbow Hunter assassins are looking to get their hands on. It is within this subplot that some of the former comrades are put at odds with one another. While Felicity is determined to track down Diaz and see him locked up at all costs, Diggle, now a high ranked officer within ARGUS, is focused on locating and retrieving the battery first and foremost, as it poses a bigger and more immediate threat to a larger number of people. Felicity’s character takes a bit of a step backwards in this regard, as, while her intentions are 100% understandable, she so easily allows herself to be riled by the idea that capturing Diaz is not ARGUS’ top priority, and, if I’m being blunt, becomes a little too whiney for my taste. That said, she and William did get attacked in their apartment just an episode prior, so her frustration is, again, understandable. But she’s still smarter than that, and by the end of “The Longbow Hunters,” she ditches her former teammates and resolves to team up with someone whose number one priority would be capturing Diaz: the FBI.

“The Longbow Hunters” shows off some good visual effects – for a CW show at least – especially when Laurel and Dinah track down one of Diaz’s old staging areas and are ambushed by one of the Longbow Hunters, Silencer, who is able to use a sound vibration/frequency-nullifying device to effectively “silence” the surrounding vicinity, which is perfect for stealth missions and also proves to be capable of nullifying the individual cries of the two femme fatales. The combined power of the Black Canary and Black Siren, however, is too much for Silencer’s device, and the effect of the two cries tearing through her sound barrier is wickedly cool. This side story of the Earth-2 Laurel and Dinah working together despite their differences shows them as not too dissimilar to one another, and Laurel opens up to Dinah about how much she was hurt by the death of Captain Lance last season, and how truly sorry she is for killing Dinah’s former partner and lover, Vigilante. There is a great emotional tone in this scene with the Earth-2 Black Siren telling Dinah that she hopes that in time she’ll recognize that Laurel is not the cold-hearted killer that she used to be, with Quentin Lance to thank for that. Katie Cassidy’s acting and emotional range have certainly improved over the seasons. When she began portraying Black Siren, I thought for sure she’d found her niche in playing the bad girl, but the emotional scenes she’s shared on-screen with Quentin and Dinah have proven me wrong (though I still love the smarmy attitude that she pulls off so well). 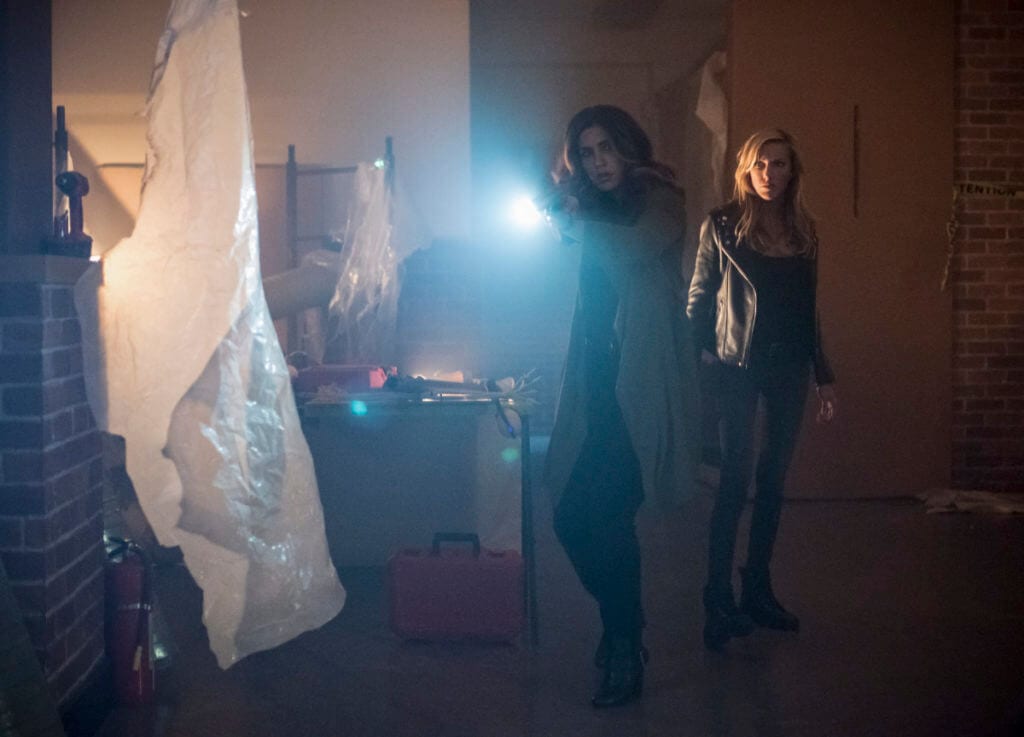 Oliver’s own trials within prison have only just begun, as Danny “Brick” Brickwell says that he’ll only share information if Ollie first does a favor for him. This favor, of course, is nothing short of unsavory, as his request turns out to be having Oliver “get rid of” a particular guard. There would be no real love lost to see the prison guard in question removed from the premises, as he’d been a complete jerk to Oliver since day one. But Oliver is still a hero, and despite their mutual distaste for one another, he attempts to warn the guard that one of the other inmates is trying to have him killed, with Brickwell having threatened that if Oliver fails to off the innocent family man, he’ll do the deed himself. Using some WWE heel tactics, Ollie is able to give the illusion that the guard had attempted to kill him in the mess hall when in truth Oliver had actually stabbed himself. But all’s well that ends well, right? Finally, flashing forward to adult William traveling to Lian-Yu and finding Roy Harper there, we discover that the former Red Arrow has been reduced to a grumpy and disheartened, hardened old man, following whatever events transpired that led to him taking up residence on that godforsaken island. We learn a little bit more about why William sought out the island in the first place: the pendant of reconnection given to him by Felicity before sending him off to boarding school for his own safety, and also learning that neither she nor Oliver came back for him. After much pestering, Roy relents and shows William why the Hozen pendant led the young man to Lian-Yu and Old Man Roy, and the two dig up a buried steel cache with Ollie’s old gear inside. Then Roy drops the bomb that they’re going back to Star City – intriguing indeed! “The Longbow Hunters” is a solid continuation of the plotlines that were started in the premiere; however, I am already becoming worried that they’ll digress some of the characters’ growth.

This episode continues the plots that were started in the premiere and does a great job with growth for some of the characters, however, some of the others feel like a step backwards and the surface-level use of characters as iconic to the Green Arrow mythos as the Longbow Hunters gives pause as well.