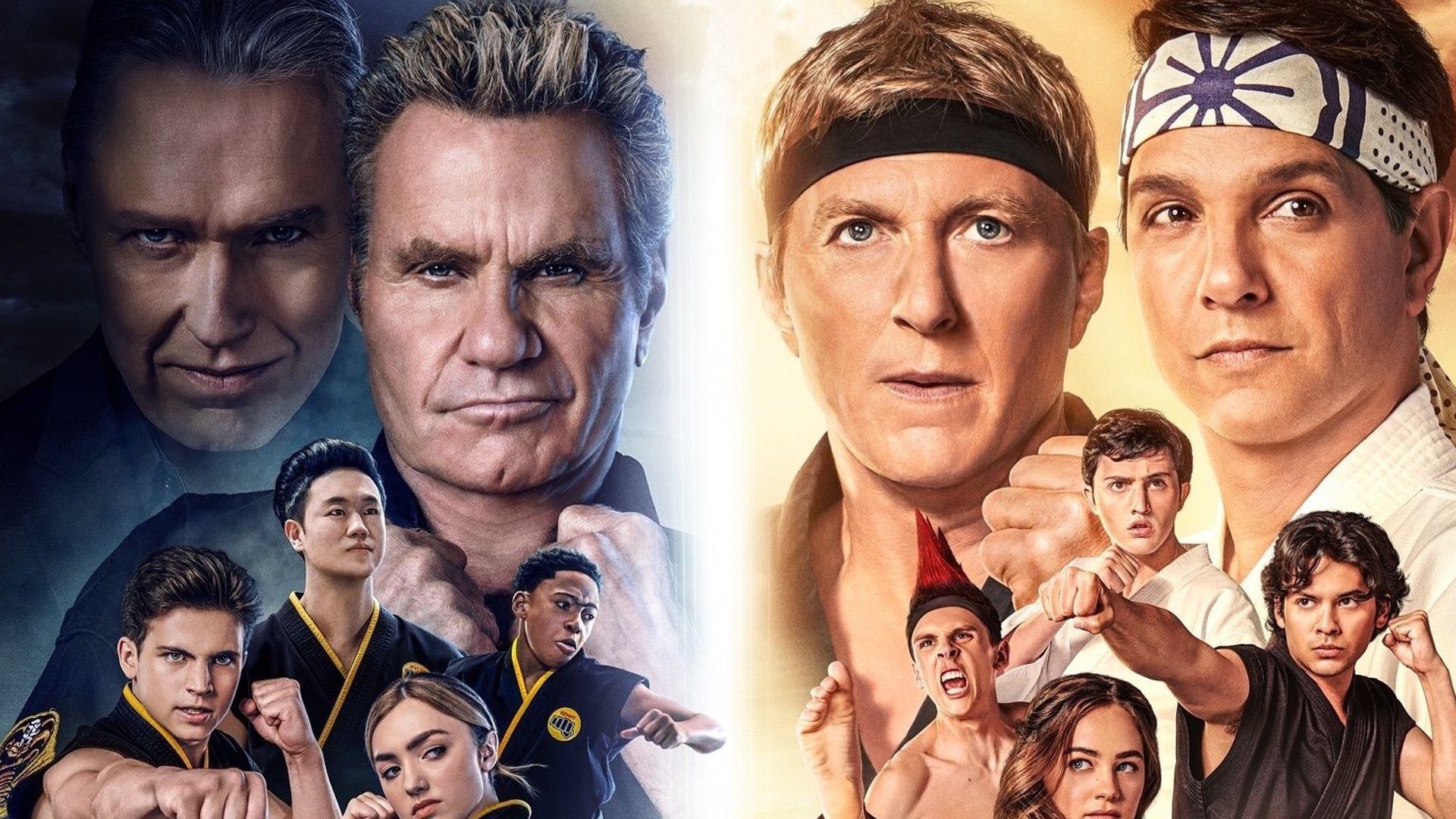 Cobra Kai rang in 2022 – or, rather, ended 2021 – by giving us the fourth chapter in its dueling dojos saga, and what a way to start a new year! With season 4, Cobra Kai continues its unbroken winning streak with another round of episodes that perfectly balance character arcs, a compelling story from multiple points of view, and genuinely funny humor that isn’t afraid to target anyone. Mr. Miyagi would be proud.

With John Kreese firmly in control of Cobra Kai, Daniel LaRusso and Johnny Lawrence merge their two dojos – Miyagi-Do and… Eagle Fang – to take down their common enemy in the All Valley Karate Tournament and restore honor to the martial arts community. But Kreese calls in an old friend of his own, someone with ties to a dark part of Daniel’s past. While the adults prepare for war, the next generation struggles to reconcile the teachings of two very different senseis, and Cobra Kai attracts a new student.

The secret to Cobra Kai’s success is in understanding what it is and why it works. At its heart, the show speaks to a fundamental humanity and does it through every one of its characters. Nobody is all good or all bad, and each makes mistakes with which we can all identify, whether we’ve done them ourselves or just thought about doing them. Even the most basic premise – the reignited rivalry between Daniel and Johnny – is rooted in our frequent inability to turn the page on our past, as well as our stubborn refusal to recognize the good in those we hate. In season 4, Cobra Kai retains those themes, and it does it without regressing the characters. For all the progress they’ve made seeing the good in each other, Daniel and Johnny still harbor their old prejudices, and when conflict inevitably comes, Daniel once again sees a violent bully who’s corrupting the youth while Johnny sees a self-righteous phony out to take what’s his. Their alliance is as tenuous and conflicted as you’d expect, and the road to the All Valley Karate Tournament is a rocky one.

Daniel and Johnny’s conflict is demonstrated through their students as much as through the senseis. Miguel and Samantha, in particular, are caught between the fathers they know and the ones who teach them things they can’t learn anywhere else. Samantha is skilled in the Miyagi-Do style of balance and defense, but her first taste of Johnny’s brand of aggressive offense intrigues her, pushing her beyond her comfort zone and allowing a girl who’s been bounced around like a pinball for a year to take charge of her life instead of constantly reacting. And Miguel, who’s mastered the “Strike First” mantra Johnny instilled in him, takes to the more measured, controlled lessons Daniel offers, mixing a little soft rock into his head-banging repertoire. And the dark reflection of both of them is Robby, who has rejected both Daniel and Johnny, throwing his lot in with Kreese at Cobra Kai, where he is now the star pupil. Robby has successfully married the calm defense of Miyagi-Do with the Cobra Kai ruthlessness, and that makes him and his new dojo dangerous to the struggling heroes. 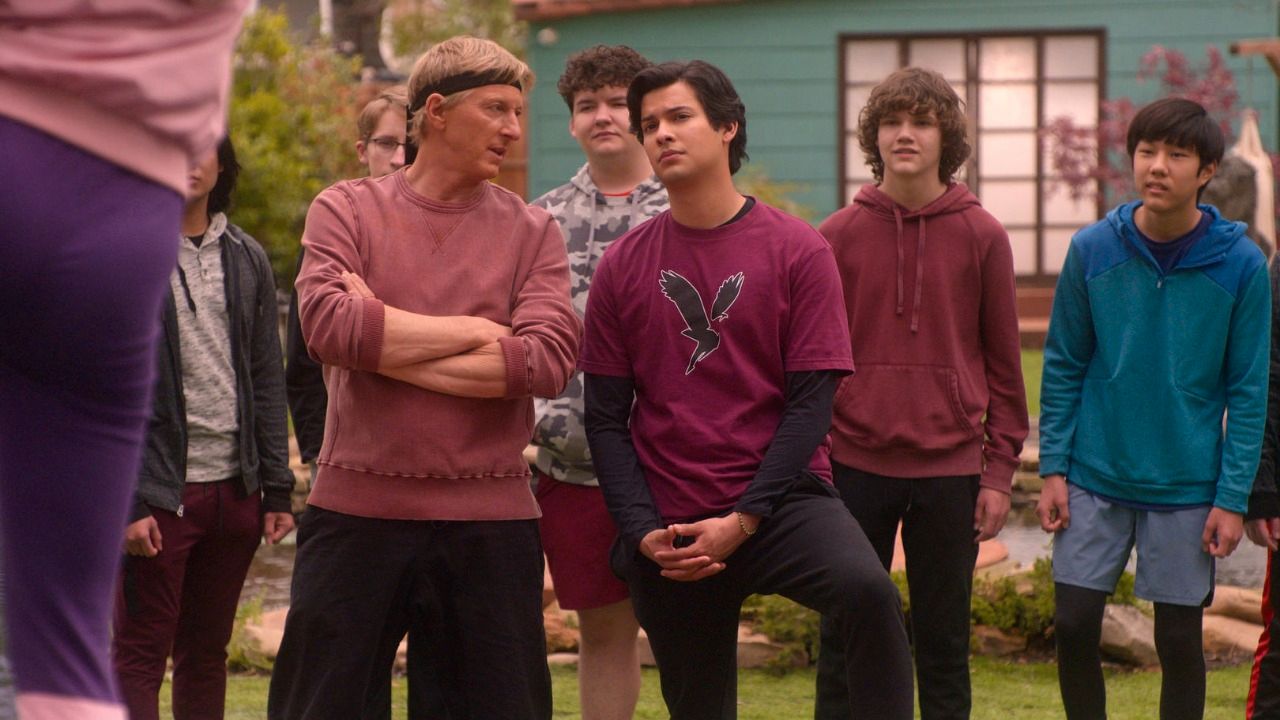 The struggle for all of them is accepting that you can’t always be what your child needs. Sam and Miguel both find that there are lessons Daniel and Johnny, respectively, are simply ill-equipped to teach them, and that drives much of the conflict in Cobra Kai season 4. Daniel and Johnny see their students seeking help from someone else as a rejection of them, and this hurts the kids more than anyone because they’re torn between two people they need. Robby, conversely, becomes a teacher himself when he takes a younger boy named Kenny under his wing. Kenny is being relentlessly bullied – and the identity of his tormentors is another blurring of the good and evil lines on this show – and he goes to Cobra Kai for help, where Robby takes pity on him. But can Robby be the man he always wanted Johnny to be, the man he sought in Daniel when he couldn’t rely on his own father? Or is he leading a good kid into darkness?

This is mirrored in the season’s villains, John Kreese and the much-ballyhooed Terry Silver. Their dynamic is quite different from The Karate Kid Part III, with each man approaching their reunion from a new position. Once they inevitably team up, their friendship takes some unexpected turns, with surprising levels of humanity shown in what was once a cartoonishly evil villain. Their bitterness and lust for power – albeit in the karate world – manifests most acutely in Tory, once again caught between a rock and a hard place in her personal life and struggling for a win any way she can get one. Last season, Kreese saw a killer instinct in Tory, and now Terry Silver sees her potential as well. But another angle to her subplot makes you wonder what her life could have been like if she’d ended up with Daniel instead of Cobra Kai. 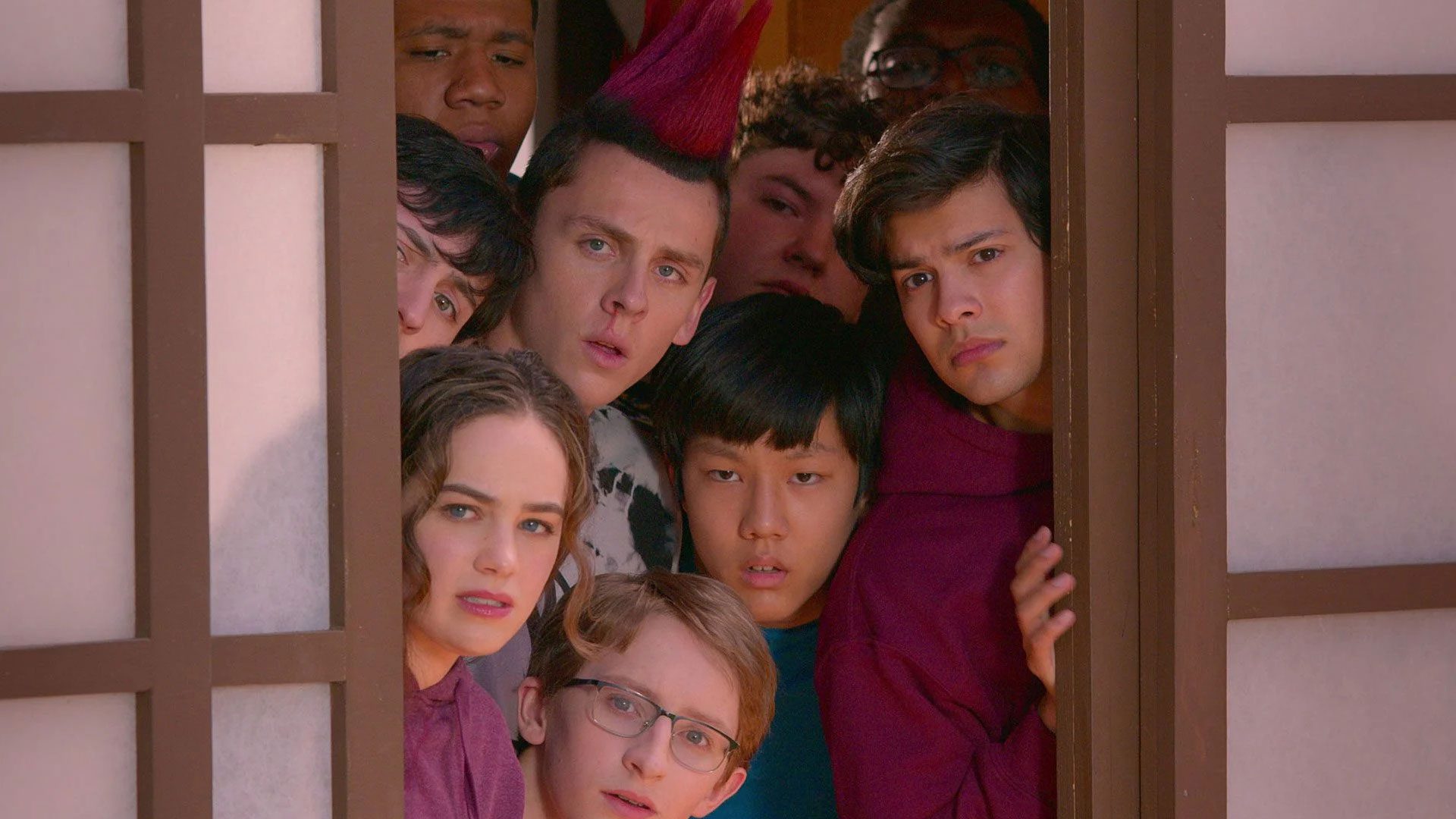 All of these arcs intersect and complement each other naturally in a story that weaves them together in just the right measures. Cobra Kai’s plot unfolds at the perfect pace, with each development making the characters more compelling, constantly growing while remaining recognizably themselves. In addition to the main players, Hawk takes the next steps in his arc from last season, and even Daniel’s mostly forgotten son Anthony gets a real part this time. And Kenny is an excellent new addition, a fresh face who so quickly elicits your sympathy that we’re once again reminded of how even the best of us can walk through the wrong door and become something we never thought we were capable of being. Similarly, Anthony is a cautionary tale of how close to home the very thing we’re fighting can grow if we don’t pay enough attention to our kids. (Cobra Kai is fully aware that Anthony has been an afterthought to this point.)

The performances are as stellar as they’ve always been. Ralph Macchio and William Zabka have now brought their old teenage characters into middle age with all the baggage that comes with it. Daniel and Johnny retain their base characterizations –meek and kind vs. angry and testosterone-filled – but they’ve added layers of sadness and regret. They come from different worlds and have had vastly different degrees of success in life, but they’re both faced with things they can’t control, no matter how hard they try. They are David and Goliath thirty years after the slingshot, reflecting on what victory and defeat even mean anymore. Martin Kove does much the same with John Kreese, taking a very two-dimensional villain from The Karate Kid and its sequels and making him human and identifiable. Kreese has regrets too, and they aren’t the ones you may think. The kids are all excellent as well, with each one caught between good and evil, like their mentors, and making each facet of their complex and shifting characters believable. 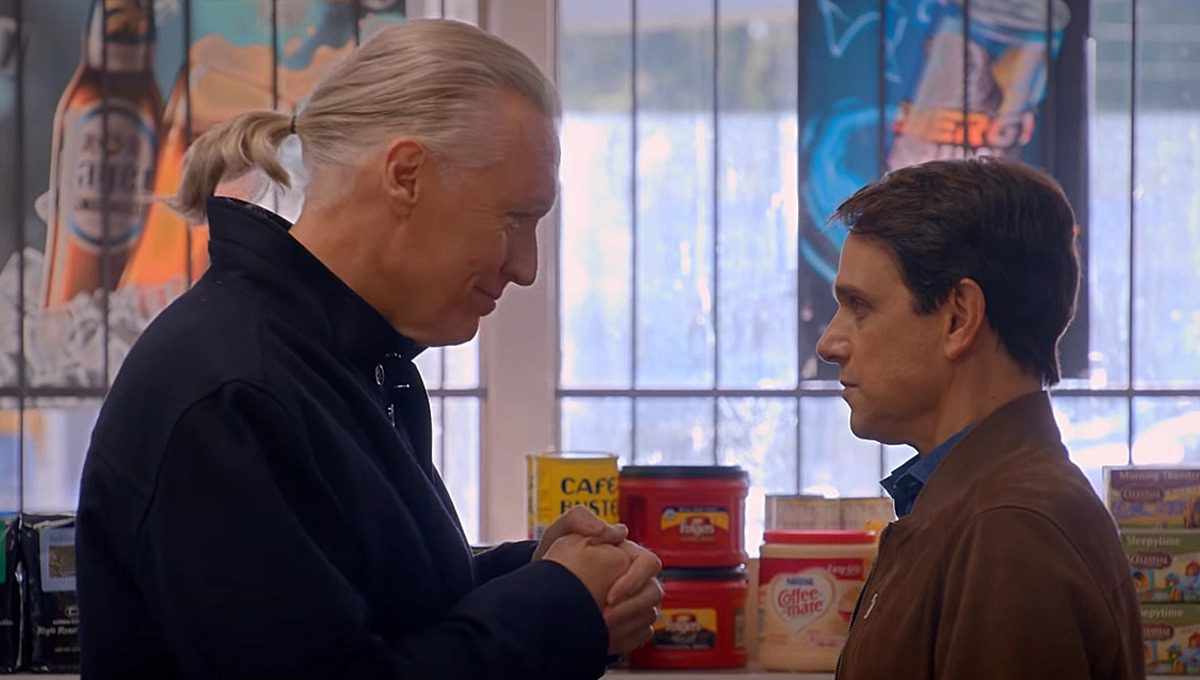 But the biggest surprise has to be Thomas Ian Griffith. In The Karate Kid Part III, Terry Silver was a silly character, so over-the-top in his evil that he felt like a caricature. (Not only was he trying to corrupt martial arts, but his company was polluting the oceans!) But in Cobra Kai, Griffith is given something much meatier to work with, and Silver becomes vulnerable, a housebroken animal lusting for the wild again, a friend tired of repaying a debt he incurred years ago, and finally, a coiled cobra waiting to strike. There are many subtleties to Griffith’s performance, which is something I didn’t think I’d say about Terry Silver. Watch how differently he acts in each stage of the season; towards the beginning, he doesn’t seem much like the Silver we saw in the movie, with a few visual cues the only things making him recognizable. But the closer he gets to Cobra Kai, the more we see the old Silver slowly creep back until we finally see the monster we’ve been waiting for since that tweet.

But it isn’t all drama in Cobra Kai. The show’s humor is back too, and it’s just as funny as it’s always been. There are plenty of jokes at the expense of the politically correct crowd, mostly from Johnny as he expresses his disdain for the modern world. But they also come at the expense of Johnny himself and his constant misunderstanding of technology and human interactions, with Miguel becoming his guide to the next generation. There are also some big laughs during Johnny’s patented training sessions, where he constructs some ridiculous-seeming exercises for his students. Some of these end up being helpful, while others are there just to amuse him. And there’s plenty of karate action, with at least one fight in virtually every episode. They still haven’t managed to equal the sheer audacity and mayhem of the high school fight in the season 2 finale, but these lower-key, more personal bouts resonate. Finally, the references to the movies are as loving and pertinent as ever, always there to add to the characters and their arcs rather than just to tug on the nostalgia cockles. Four seasons in, Cobra Kai still gets it. 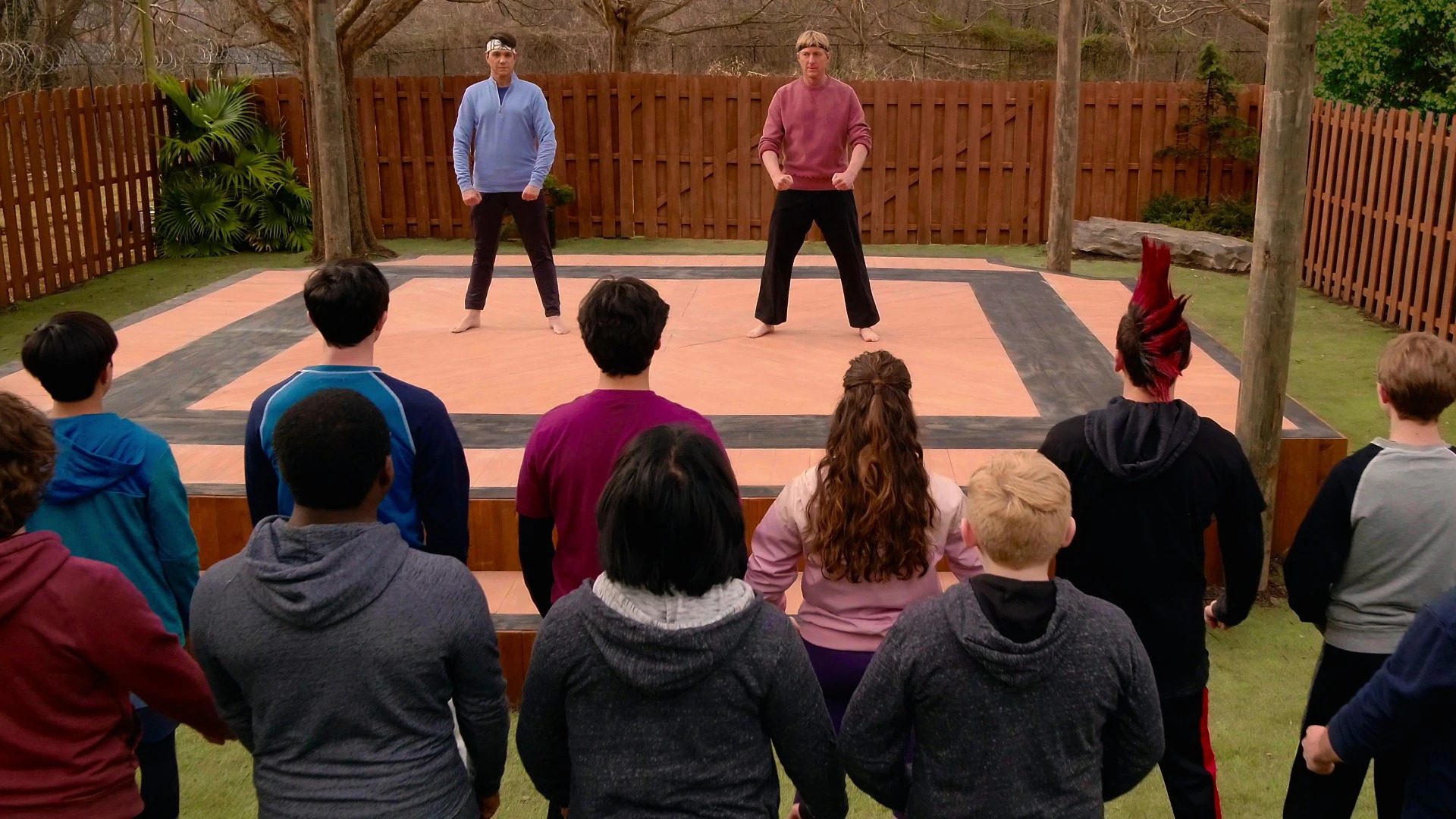 Cobra Kai season 4 is another win for this amazing series, and another win for people longing for good entertainment and a revival of an older property that does its forbear justice. The character work is as complex and involving as ever, with excellent acting to compliment it, along with lots of legitimately funny humor and exciting karate fights. If you’re a fan, you won’t be disappointed.

Cobra Kai season 4 is another win for this amazing series, and another win for people longing for good entertainment and a revival of an older property that does its forbear justice. The character work is as complex and involving as ever, with excellent acting to compliment it, along with lots of legitimately funny humor and exciting karate fights.

Loved that season. Though, Kreese seemingly redeeming himself makes me wary. I do hope Silver remains a villain. Many characters redeemed themselves… I hope Silver remains irredeemable villain; if everyone redeems himself, redemption starts feeling lame.

Yeah, I think Silver is going to have to stay totally evil. I thought Kreese would be that, because he filled that role in seasons 2 and 3; he was the devil on Johnny’s shoulder. I guess now it’s Silver; maybe he’ll bring in Barnes, the psycho karate champion from Part III.