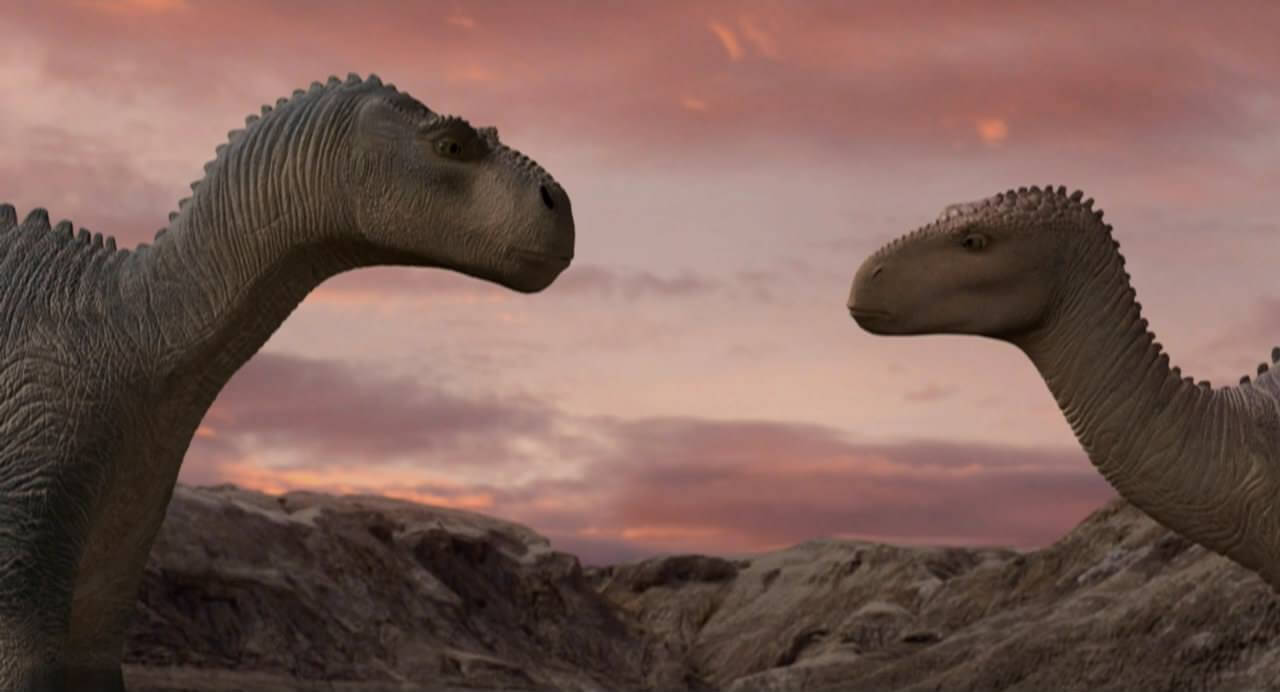 Throughout the late 80s and 90s Disney films utilized computer graphics quite a bit. By the turn of the century, they decided to try to make a film with all computer generated characters, presumably to compete with DreamWorks and keep up with Pixar. The result is Dinosaur, not only one of the most forgotten Disney movies, but in my opinion one of the worst. 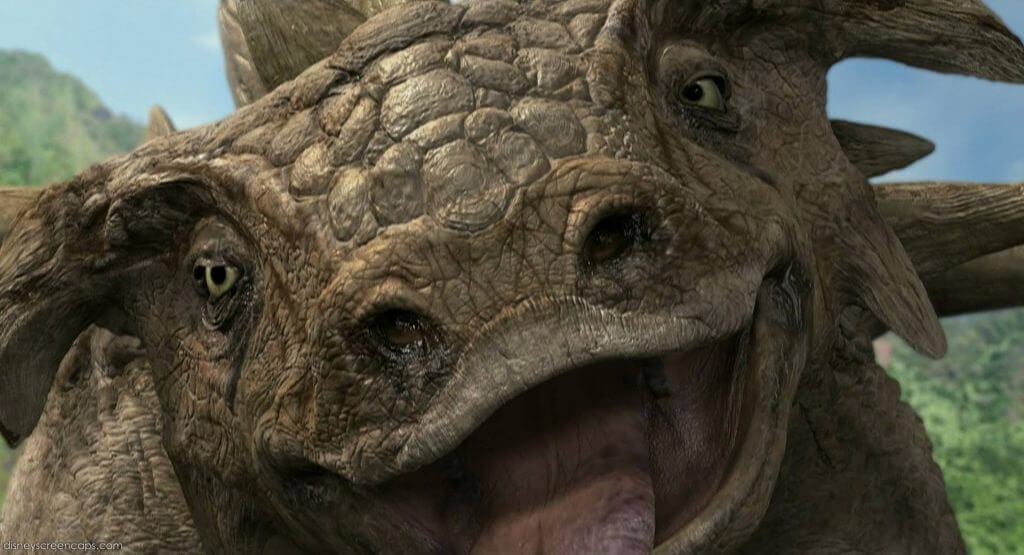 Dinosaur opens with an iguanadon mother protecting her nest of eggs from the elements and predators. But her success is short-lived as a carnotaur comes barreling into the valley, crushing most of her eggs and sending the remaining one on a journey. Passed between dinosaurs, birds and various creatures looking for a meal, the egg travels quite a long way before it ends up in a tree with a family of lemurs named Plio, Yar, Zuri, and Zini, who raise the baby dinosaur and name him Aladar. Once Aladar is grown, the lemurs’ island is hit by a meteor, so they hop on Aladar’s back and evacuate. Soon they end up traveling with a mixed herd of dinosaurs, including a lady iguanadon named Neera, her brother Kron, and all kinds of new friends and enemies. While Kron leads the herd using abuse and fear, Aladar proves himself by showing empathy for older and slower dinosaurs and protecting everyone, even Kron. Aladar ultimately leads the herd to the Nesting Grounds and mates with Neera.

Dinosaur is really not a good movie. There are some decent ideas in here, but none of them are executed well. My main issue with the film is the characters. We’re supposed to like Aladar and root for him, but the guy’s a total stiff; he has no personality whatsoever. And when the lemur family takes him in, they should form a meaningful bond to create some kind of emotional response from the audience. He’s been adopted by another family of another species, and normally Disney would do what they did with Tarzan and use that to give the movie an emotional punch. But Dinosaur is too busy making jokes about the “love monkey” to develop the characters or their relationships. In fact, Aladar’s relationship with Neera isn’t any more satisfying than than the one with his family. The two speak two or three times during the movie, and in the end they lay eggs. Narratively there’s no reason to have them hook up, and it’s not satisfying for the audience at all because this relationship wasn’t developed and neither character has a personality or motivation we can care about.

The villains don’t fare much better. Kron, the leader of the herd and brother of Neera, is portrayed as a corrupt leader who shoves everybody around and instantly dislikes Aladar. But why? What causes him to act like this? We don’t really know anything about the guy, aside from him being a jerk. They really think that’s sufficient personality for one of the main characters? This movie’s main antagonist is a strawman. The carnotaurs are framed as evil and are unable to speak, unlike most of the dinosaurs in the film. It’s unclear what this is supposed to mean in the context of the story. Are they simply unable to communicate with different species, despite the other dinosaurs communicating with each other and with the lemurs? Are the carnotaurs unintelligent? Compared to the speaking animals, are carnotaurs just “dumb animals”? Because if so, that casts their behavior in an entirely different light. Url, one of the slower dinosaurs at the back of the herd, also can’t talk. He drools and pants like a dog. Is he a special needs dinosaur? Are this type of dinosaur commonly seen as pets by the other species? It’s like they simply didn’t put any thought into this world or the characters inhabiting it. 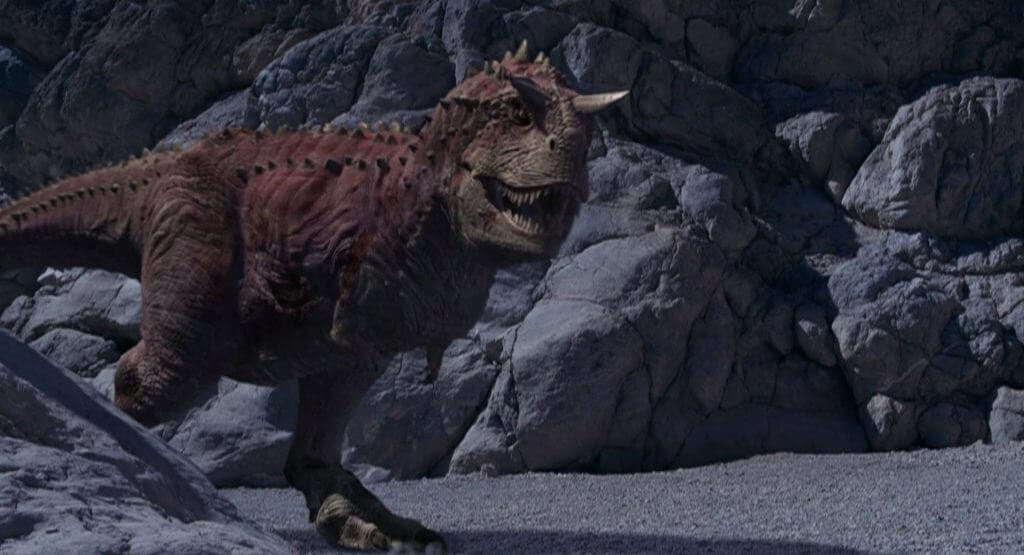 To be honest, I don’t see why this film needs a villain at all. These are dinosaurs. Isn’t them battling the elements and fighting for survival enough conflict?  How come in movies like this there’s always one dinosaur who’s a really big jerk? It feels like really lazy writing to just arbitrarily make one of the dinosaurs bad. And again, if the carnotaurs really are mute, it’s possible they’re unintelligent compared to the other dinosaurs, and imposing morality on their actions makes no sense. I could almost commend them for showing violence and death the way they do, though. This was the first Disney animated feature to get a PG rating from the MPAA since The Black Cauldron, and you can see why.

Although the dinosaurs are computer animated, the film’s backgrounds are real. This is actually one point in the film’s favor. It looks pretty good, even almost 20 years later. The animated dinosaurs and real-world backgrounds look very natural together, and there are several shots in Dinosaur that are just lovely. This isn’t a stunningly animated movie, though. It hasn’t aged all that well, but for 2000 this was pretty good animation. The music is really pretty and majestic in parts too. In fact, while the animation is serviceable, the film’s score is the one aspect I would call good, in addition to the dinosaur sound effects. This sound department really deserved a better movie to work on, because the beautiful music and convincing sound effects add ambiance to an otherwise lifeless production.

The first five minutes or so of Dinosaur are also pretty good, with the egg traveling across the valley accompanied by the grand music and visuals. The very beginning and end of the film have voice-over narration by Plio, and they’re pretty good lines, but they don’t fit the movie; Pilo implies that this will be a grand, epic film, and it’s really not. It’s just about this one dinosaur’s life. The ending narration is hopeful and optimistic, but that’s kind of uncomfortable when you know what happens to the dinosaurs eventually. 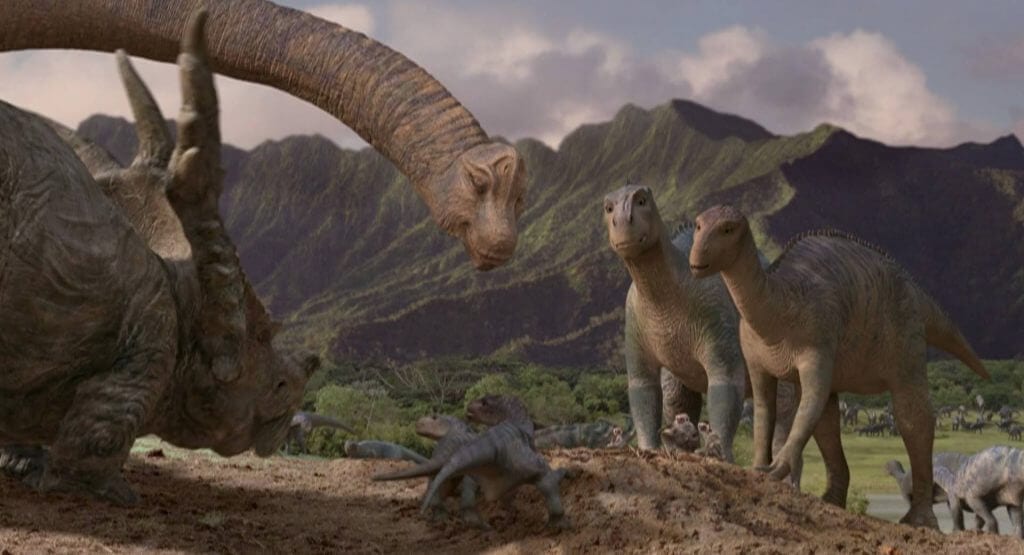 I wish I could like Dinosaur. It’s certainly unlike anything Disney had done before, and parts of it are good. The cast is full of character actors I normally really enjoy, like D. B. Sweeney, Alfre Woodard and Julianna Marguiles. Kron is voiced by Samuel E. Wright, probably best known for playing Sebastian in Disney’s The Little Mermaid and its sequels and spin-offs. The actors do a decent job, but the dialogue they’re working with is bland and their characters are paper-thin.

I really, really do not like Dinosaur. It may be a stretch to call it the worst film Disney has ever done, but I’m going to do it anyway. The only aspects of this movie that work are the superficial ones. This film is so bland it makes Pocahontas look like The Lion King by comparison. Dinosaur was originally intended to have no dialogue, and maybe it would have been a little better if it didn’t, but realistically it would still suck overall. There are so many problems with this film that to make it good you would have to scrap almost every single element. The characters, relationships and story are all just stereotypes that never get fleshed out. Most Disney movies deserve at least a fair-chance watch in my opinion, but I can’t in good conscience recommend Dinosaur to anyone. Buy the soundtrack, skip the film and save your own mental health.

The characters, relationships and story are all just stereotypes that never get fleshed out. Most Disney movies deserve at least a fair-chance watch in my opinion, but I can’t in good conscience recommend Dinosaur to anyone. Buy the soundtrack, skip the film and save your own mental health.