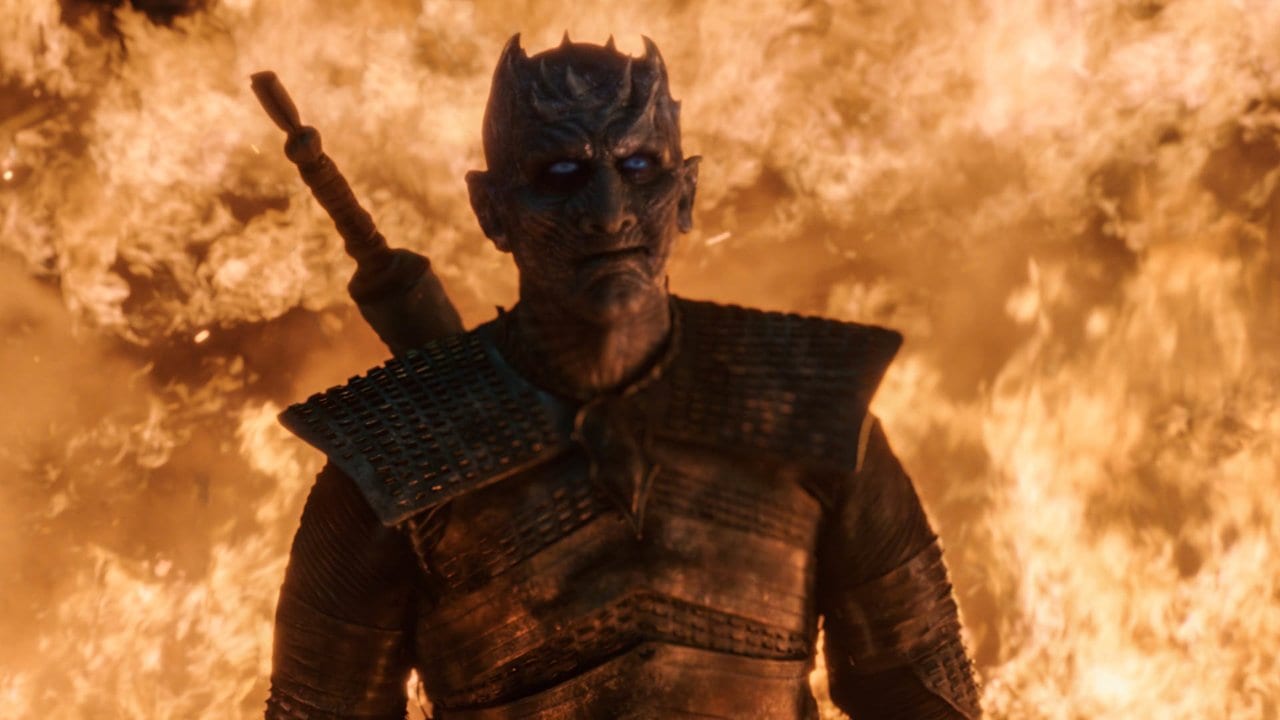 “The Long Night” opens with everyone preparing for the coming battle. Sam arrives at the front. Melisandre comes and enchants the fighters’ swords. She tells Davos that she’ll be dead by the dawn. The dead attack, and Jon and Daenerys mount their dragons to set them ablaze. Edd dies protecting Sam from a walker. Sansa joins the people down in the crypt. The troops are beaten back to the gate, and the order is given to light the trenches. Daenerys can’t see the signal to engage her dragon; Melisandre ultimately lights it with the powers of the Lord of Light. In the crypt, Sansa and Tyrion discuss their short-lived marriage. Bran wargs into a murder of crows to run recon, and he sees the Night King riding the dead dragon. The White Walkers overrun the burning trenches and the Night King approaches. The Hound is frozen in fear surrounded by fire on all sides. Lady Mormont charges on the undead giant and kills him, sacrificing herself in the process. Arya is set upon by a large group of Walkers. The crypt door rattles with the screams of dying men. Baric and the Hound rescue Arya from the Walkers. Baric is killed; Melisandre states that he has served the Lord’s purpose for him. The Night King’s dragon attacks Jon’s dragon, grounding it. Dany’s dragon fires upon the Night King, but he emerges unburnt. The dead in the crypt begin to rise. Outside, the Night King awakens the dead troops to fight Jon off him. Dany’s dragon kills many of them, protecting Jon, but is soon attacked by the remaining Walkers. Ser Jorah is wounded, but continues fighting. Theon charges on the Night King to protect Bran; the Night King kills him. Arya kills the Night King, destroying his army. Jorah passes away. Melisandre removes her choker and dies.

Alex: I found “The Long Night” underwhelming. This is the big showdown Game of Thrones has been building to since the first scene of the first episode, but it ended up being the least compelling of any of the major battles. Nothing unexpected happens, no one unexpected dies (with one possible exception, minor though it is), and the looming threat now feels like a waste of everybody’s energy.

Virginia: I actually agree. I liked both “Hardhome” and “Battle of the Bastards” better than “The Long Night,” both in terms of story and action. “The Long Night” reminds me of The Last Jedi in some ways. Now, hear me out! It’s not that bad, and it’s only one episode of six; however, it feels like, in some ways, the creators are trying to subvert expectations by doing the opposite of what we would expect – and, in some cases, want. No major characters die in this episode save those we were all expecting to lose. Usually, Game of Thrones sneaks in some surprise hits, so that’s what we would be expecting to see. It’s also a rather anticlimactic episode given that it’s the culmination of the conflict with the White Walkers. Even some characters that seemed obviously doomed like Brienne survived the battle. Finally, I think the Night King himself was dealt with way too quickly. I thought this battle would be two episodes, and his actual death was rather lame and fast. Just like the divisive Star Wars installment, this episode’s attempts to do something different backfire for the most part. That being said, did you have a favorite scene?

A: I think it’s the scene where Arya is in that library trying to avoid the roaming wights. It’s full of tension, played without any music, and it feels like Arya could die. I expected her to run into one of the wights a few times and was shocked when she finally did (and smiled when she knifed it under the chin!). The big fights in “The Long Night” felt weightless to me, but some of these moments were very well-executed; others, unfortunately, weren’t. For example, when Jon Snow goes after the Night King as he’s resurrecting a bunch of dead soldiers to become new wights, trying to get to him before his henchmen rise, it should be a harrowing sequence, but because we know they won’t kill Jon Snow it has no tension. The Arya scene works better because she may not make it.

V: That’s a good choice. This was a smaller moment, but I thought it was nice when Bran thanked Theon and said he was a good man. It’s too bad that his charge toward the White Walkers and the Night King directly after was so lame and he didn’t land a single blow, but nonetheless, it was nice to hear Bran say something appreciative. On a different note, I couldn’t see anything for most of the episode. I imagine it was filmed this way intentionally, but I really didn’t like it.

A: Neither did I. The initial scene where the Dothraki charge the White Walkers was interesting, and the visual of the flaming weapons going out one by one was neat, but after that, it was just a confusing mess. I don’t know why they went this route after so many incredibly cinematic battles over the years. Again, this is the one they’ve been building towards, and they decided to make large parts of it incomprehensible. And even when you could see what was happening, it was nothing special, just a bunch of very basic sword-clanging fights where nothing of consequence happened. I think it’s very telling that, in an 82-minute episode that is almost all action, both of us chose quieter moments as our favorites. 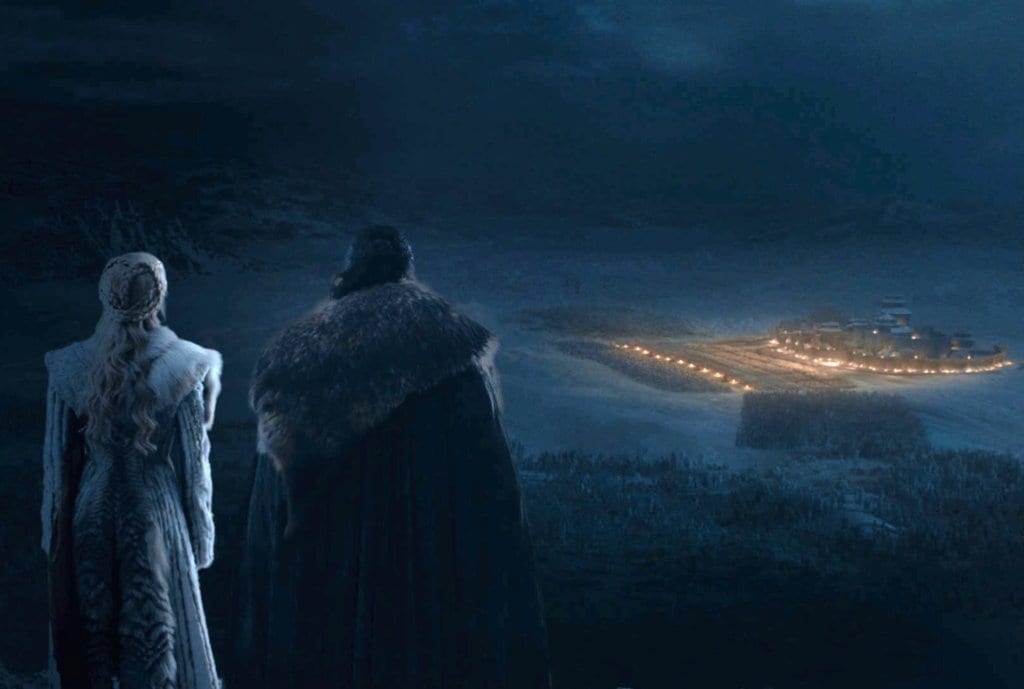 V: That’s a good point. I can’t think of any action sequences in “The Long Night” that I found very interesting throughout the whole episode. It was sad when Jorah died defending Daenerys, but even that wasn’t exciting to me. One thing that bothers me is that it feels like several characters behaved in a particularly cowardly manner this week. For example, Sam just cowering there as Edd dies trying to protect him. I also wasn’t crazy about the scenes showing Tyrion and Sansa hiding in the crypt while their allies are slain by the Walkers.

A: Sam was infuriating in “The Long Night.” Why is he even on the battlefield? What Arya said to Sansa applies to him too. Sansa and Tyrion doing nothing was disappointing as well, although I liked their discussion about their “marriage,” particularly Sansa telling him he’s the best of her husbands. But Tyrion made a big deal of how he’d fought in wars before and could help; Daenerys decided he was too valuable to put him in the field, but once the fight came to them in the crypt, it would’ve been more satisfying to see him jump into action. And Sansa was raring to go as well; as with Tyrion, Arya was right to tell her to get to safety, but when the (not dire) wolves are at the door, why not let her have a moment or two?

V: I agree. It makes sense why they were down there, but it would have been awesome if they were ultimately able to defend some of the children. And what was the point of the little girl last week who wanted to dprotect the crypt? That didn’t lead to anything. I will say, the one death that did surprise me was Lady Lyanna Mormont. She became a fan favorite character despite her small role, and even her death was badass.

A: That was very cool. I liked her, and she went out like a legend, but when the most surprising death in the big, climactic battle with the ice demons and their zombie spawn is someone who’s been in the show for a cumulative five minutes, it’s a little disappointing. I actually thought she might have survived until she came back as a wight. The events in the crypt are also a missed opportunity because nothing is made of the Night King raising all the dead Starks as wights. No one is identifiable; it’s just a bunch of skeletons, one of whom might be somebody’s grandma. Why bother if you’re not going to do something cool or creepy with it?

V: I agree. It would have been really disturbing if Sansa, for instance, was faced with the risen corpse of someone she knew. The idea of walking corpses has been tackled in this show already in several ways, so there was effectively no reason to even do this unless they were going to do something new with it. “The Long Night” had all the opportunity in the world and took none of it. Why set it up so well with such a great episode as “A Knight of the Seven Kingdoms” just to deliver the ultimate anticlimax? Speaking of the previous episode, I’m legitimately shocked that Brienne survived the Battle of Winterfell. 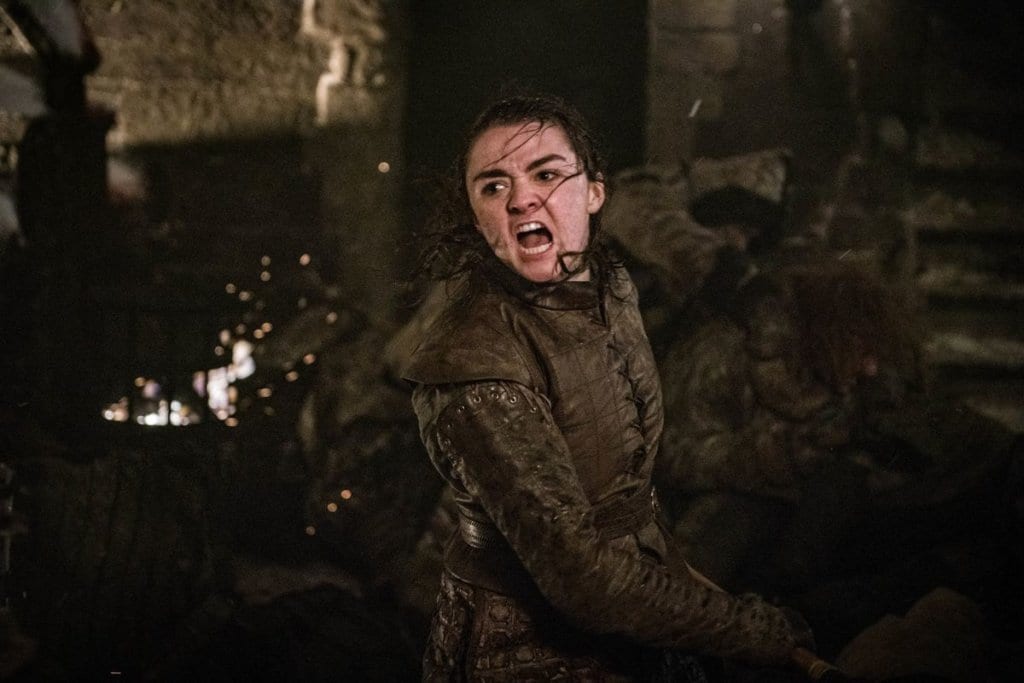 A: Yeah, I thought they were setting her up for death too, and there were several moments where it looked like she was a goner. I’m glad she didn’t in a way, but, as weird as this sounds, I think someone we love should’ve died, and someone closer to being a main character than Jorah or Theon. Keeping Brienne alive is actually a good move because it’s excellent misdirection, but they aren’t misdirecting from anything. I probably sound like I hate “The Long Night,” and I don’t, but it’s jarring how safe and, frankly, lazy it is.

V: Honestly, if I hated it, at least that would be some emotion. I just don’t really care about this one. After it ended, I was like, “That’s it? That’s the big battle?” And it was hard even choosing a favorite moment because most of them barely registered. Even when we could see what was happening, it wasn’t much anyway.

A: The character who comes out of “The Long Night” the best is Cersei. She looks like a genius for not freaking out about these guys like everyone else did. Jon Snow, meanwhile, looks like a Chicken Little, screaming that the sky is falling over a guy who goes out like a chump and takes his whole army with him. All that dread the previous two episodes expertly instilled in us was for nothing, and the defeat of the White Walkers feels like something the showrunners checked off their list. This should’ve been the hardest win yet, but it was like a video game played on easy mode.

V: I think that’s part of the subversion of making Cersei the ultimate threat, even more so than the Night King. I don’t like it, and it seems pretty cheap. We wait with bated breath every week for this show and this week just felt like a total dud.

A: And they could’ve established her as the real threat better. It’s her manipulation and ruthlessness that makes her dangerous, not just pure force. That would’ve been a good contrast with the White Walkers and their (ironically) scorched earth modus operandi, but now that they’ve become a bunch of pushovers, it doesn’t really matter. 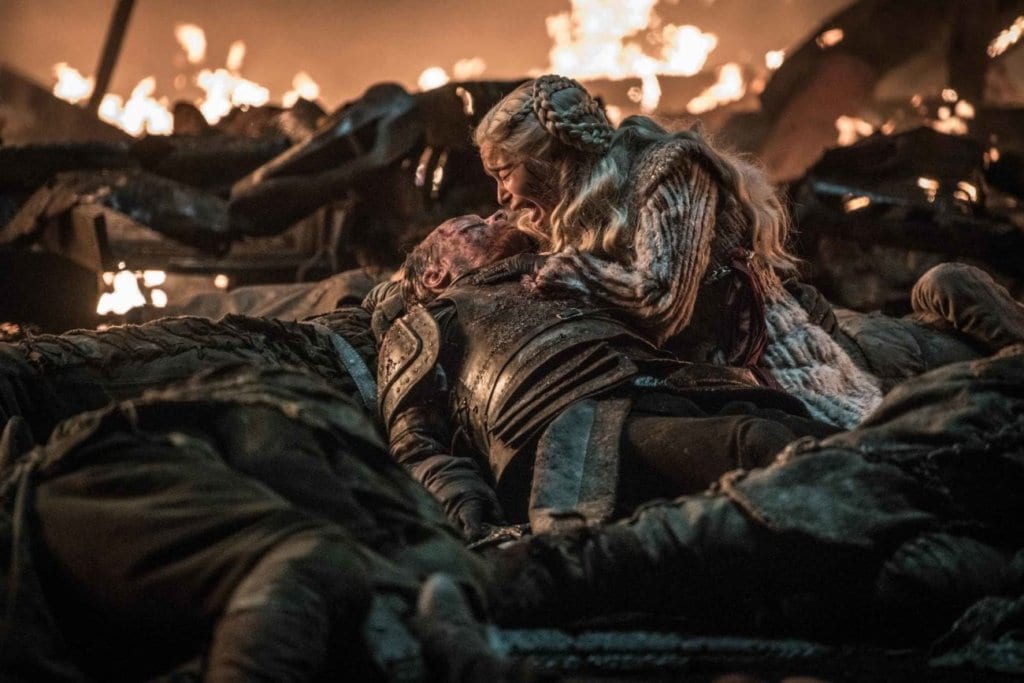 V: That’s true. That would have been an interesting subversion of expectation. She is a great villain, and I look forward to her showdown with the heroes, but it’s a shame we couldn’t have more fun on the way there.

A: I haven’t seen too many reactions yet, so I don’t know what the general fan consensus of “The Long Night” is, or if there even is one, but if it’s anything like ours, they absolutely need to get the rest of the season right. Fighting Cersei has to be an ordeal, and whatever victory is won has to be a tough one.

Game of Thrones - "The Long Night"

"The Long Night" is a disappointment, a toothless final battle that demystifies the White Walkers and the Night King while offering no surprises or stakes and some difficult-to-comprehend filmmaking.