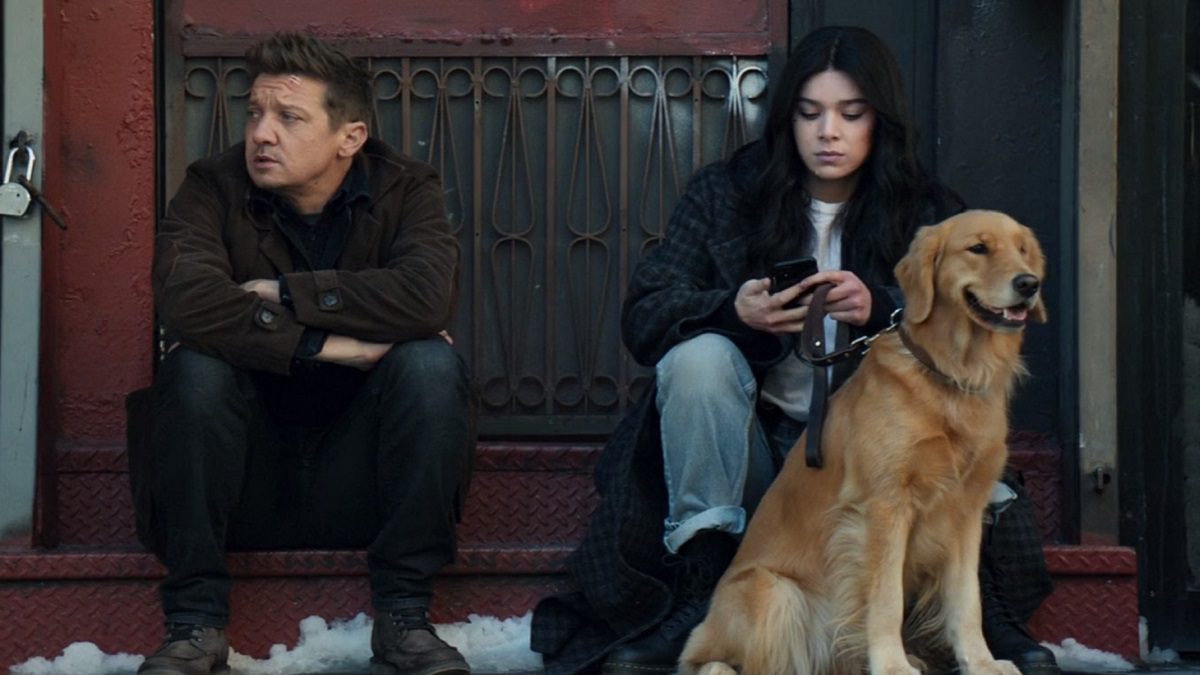 “Echoes” is the most frustrating kind of episode. On the one hand, it’s easily the best Hawkeye’s been yet and has some excellent character work and a fun action sequence. However, it’s also got the show’s shortcomings in full effect, and the contrast teases what Hawkeye could have and should have been while being weighed down by what it is.

Clint and Kate learn more about their mysterious captor. Clint feels the strain of being away from his family at Christmastime. Kate looks into her creepy soon-to-be stepfather. Bonding, dog-walking, and trick arrows ensue. A relic from my childhood tugs at a heartstring. (I’m susceptible to nostalgia on occasion too.)

The pre-title sequence of “Echoes” is the best thing Hawkeye has done so far. It’s a mini origin story for Maya Lopez, the deaf ringleader of the – I feel lessened as a human typing this – Tracksuit Mafia, from her childhood and discovery that she’s deaf through her beginnings in semi-organized crime. In these roughly ten minutes, Maya eclipses Kate and becomes a fascinating new character, sympathetic in her background and scary in her abilities. Underneath the silent assassin exterior is a little girl who lost the one person on Earth who understood and accepted her. And the identity of her father’s killer puts the show’s conflict into a different perspective.

Can you blame Maya for wanting to kill Ronin? And Hawkeye frames him for us perfectly because we see him through Maya’s eyes. Logically, we understand that he’s a criminal and has probably done plenty to earn his fate, but all we know of him is a good father who loved his little girl. It’s the visceral experience of his kindness that makes us empathize with him and Maya; we see our dad when he dies in Maya’s arms, and in that moment, we want her to get her vengeance. That’s great storytelling and character work; Maya is a villain we can identify and sympathize with, even if we ultimately won’t want her to kill Clint.

What a pity that “Echoes” immediately cuts to Clint and Kate tied up on those stupid bouncy horses in the abandoned toy store (which is revealed to have been a KB Toys once upon a time; this meant more to me than the many, many nostalgic references we’re inundated with nowadays). Not only do they gyrate back and forth in what someone clearly thought was a funny sight gag, but they’re surrounded by the Tracksuit Mafia, who remain a bunch of goofy buffoons. There’s no danger felt until Maya enters the room. (I know that’s kind of the point, but it makes every scene they’re in feel like dead weight.) Like so much entertainment in the modern era, Hawkeye’s tone is all over the place, and it hurts the narrative.

It’s also unfocused, which is another problem, and that centers on Kate Bishop. “Echoes” establishes what this show should have been about – and I tend to think it was in an early iteration before Kate was forced into it. This should have been a more serious story about Clint atoning for his sins, pitted against someone he wronged who is looking for justified revenge. Maya’s deafness even gives meaning to Clint’s hearing aid; he’s fighting the loss of his hearing while she long ago embraced it, much like he wants to be better than his dark past while she descends into darkness after losing her only light. You can already see the signs of him learning the lesson Maya’s father taught her about using her disability. Even the final shot of the episode is Jack attacking Clint with Ronin’s blade – in other words, Clint’s dark past literally trying to kill him. This is potentially great stuff, and the actors make it clear they could have pulled this off perfectly well.

But no, we’re in the age of legacy heroes now, so they short-changed a great Hawkeye story to satiate their gluttony for passing-the-torch transitions. Kate Bishop detracts from Clint’s arc by being his co-lead, and especially by being his clear replacement. Hawkeye no longer feels like a piece of Clint’s development because, in the back of our minds, we know this is just his farewell so Kate can take over for him. It’s a shame because Hailee Steinfeld is good in the role (what the hell happened in that first episode?), but the character shouldn’t be here. Neither should the comedy, which is broad and overly silly, and it ruins whatever pathos any given scene establishes. I’m not saying there shouldn’t be any humor, but it should be more in keeping with the tone; snide one-liners as opposed to bouncy horses and idiotic henchmen.

This tonal shift is also felt in what is mostly an exciting action scene. Clint and Kate’s escape from KB Toys and the ensuing car chase is well-filmed and propulsive, with the corny nonsense of the Tracksuit Mafia minimized because they’re in cars and not talking. But it’s undercut by those stupid trick arrows Kate is firing. This is supposed to be a field test of her archery skills; wouldn’t that have come across better if she weren’t firing purple goo arrows? (I will admit to getting a kick out of the Pym Particles arrow, though.) And, again, what should be a personal mission for Clint becomes an in-your-face “This is Kate’s show now” statement. I guess I can appreciate using the action to comment on the show’s themes; I just wish they were better and more consistent.

There are some other good moments throughout “Echoes.” Clint wrestling with his hearing loss makes for some fun scenes, and I laughed at his exchange with Kate on the subway. His phone call with his son is heartbreaking, and Jeremy Renner plays the sadness of a father longing to be with his family perfectly. (This is also a nice mirror to Maya and her father; Clint’s son is getting a small taste of what all of Maya’s Christmases will be like, thanks to his dad.) Renner also conveys the regret in Clint’s voice when he denies being a role model while Kate tells him how wrong he is. This would have been a better use for Kate – make her a fan of Clint’s without adding in the archery and the legacy crap. I continue to be pleased by the use of Christmas music; setting the car chase to “The Nutcracker Suite” (or a version of it called “A Mad Russian’s Christmas” by Trans-Siberian Orchestra, at any rate) was brilliant. And that mysterious figure who pats Maya’s face in the flashback… if that’s who I think it might be, it’s reason enough to keep watching.

“Echoes” is the best Hawkeye episode so far, but its unevenness is frustrating. Its strong character work for Clint and Maya hints at a much better show, while its silly humor and shifting focus to Kate keep it from achieving what it could.

“Echoes” is the best Hawkeye episode so far, but its unevenness is frustrating. Its strong character work for Clint and Maya hints at a much better show, while its silly humor and shifting focus to Kate keep it from achieving what it could.