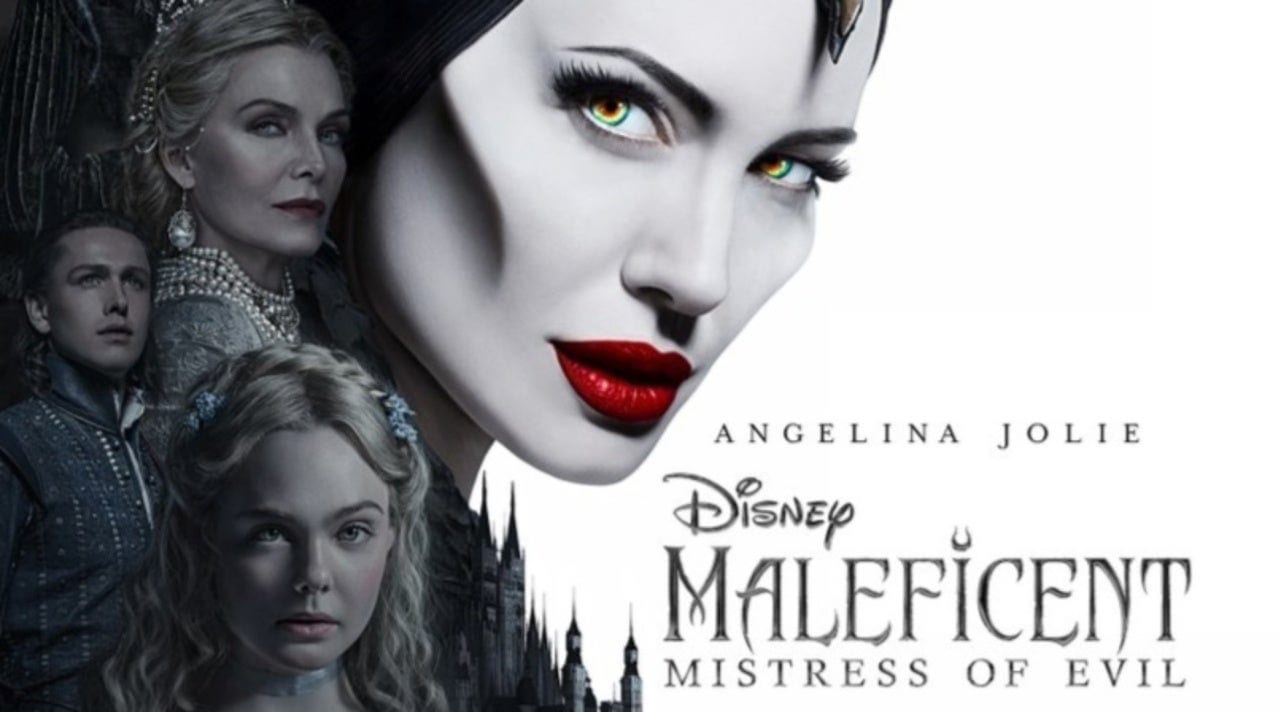 When Disney announced production on a sequel to 2014’s Maleficent, I was confused and a bit annoyed. I’ve always loved 1959’s Sleeping Beauty, a tremendous feat of animation and filmmaking. Trailers and marketing material for Maleficent put me off by eschewing a lot of what made the animated classic great. However, when I saw Maleficent in theaters, I couldn’t hate it. Sure, it made Prince Philip into an incidental plot device and ruined characters like King Stefan and the Three Good Fairies, but Angelina Jolie was great in the role of Maleficent. She wasn’t Marc Davis and Eleanor Audley’s masterful creation of magic and evil, but she nailed the tragic antihero character she was going for. Elle Fanning as Aurora and Sam Riley as Diaval were also charming. As I said, I wasn’t thrilled with Philip’s lack of plot function, but Brenton Thwaite’s (Pirates of the Caribbean: Dead Men Tell No Tales) performance was fine. Overall, the film wasn’t what I’d call good, but I liked it, mostly thanks to Jolie. Nonetheless, it was superfluous and left no unanswered questions hanging for a sequel. How does Maleficent: Mistress of Evil measure up? Let’s have a look.

Maleficent: Mistress of Evil opens, appropriately enough, five years after the main events of the first film. Philip (now played by Harris Dickinson from Trust) proposes marriage to Aurora, who immediately and enthusiastically accepts. Diaval relays the news to Maleficent, who, unsurprisingly, isn’t thrilled. She confronts Aurora, who presents her with an invitation to dinner from Philip’s parents. Aurora begs for the chance to prove Maleficent wrong about love, Philip, and other humans in general. Reluctantly, she agrees and even honors Aurora’s wish that she wear a scarf to cover her horns. Dinner goes about as well as one would expect; Maleficent and Queen Ingrith (Michelle Pfeiffer) exchange snipes throughout, with Philip, Aurora, and King John (Robert Lindsay) trying to keep the peace. The King falls into a curse-sleep, which everyone blames on Maleficent. Aurora begs her to save him, but she flies away in anger, stating that the marriage and the union of the Moore and Alstead are off. She doesn’t make it far before one of the Queen’s goons shoots her down with an iron bullet. She’s rescued by one of her kind, a Dark Fae. She wakes in a huge cavern surrounded by her people, some of whom think her allegiance should belong to them rather than a human princess. Humans call for Maleficent’s head and war against all fairfolk as all of Maleficent’s kin seek revenge for their losses. Will love win the day and unite the kingdoms before all-out war begins?

The casting in Maleficent: Mistress of Evil gives it a leg up over its predecessor right out of the gate. Angelina Jolie and Elle Fanning are just as good this time around, and Michelle Pfeiffer is such a better villain than Sharlto Copley it’s not even funny. She’s cold, threatening, bad-ass, and a good foil for Maleficent. Her motivation and plan are pretty basic, but she brings a lot to the table and elevates the material, as Jolie did in the first film. Robert Lindsay isn’t given a whole lot to do for big parts of Mistress of Evil, but he’s likable as King John, and I like his relationship with his son. I find it puzzling that they re-cast Prince Philip, but Harris Dickinson brings more personality and life to the role than Brendan Thwaites did. He has good chemistry with Elle Fanning, whereas Thwaites had none, making his character seem even more pointless in the first film. Chiwetel Ejiofor and Ed Skrein are pretty good as Conall and Borra, respectively. The film surprised me with these two, and with the Dark Fae in general. I’m amazed that the movie’s promotional campaign managed to avoid spoiling these characters and some of the film’s best scenes. Juno Temple, Lesley Manville, and Imelda Staunton, unfortunately, return as Thistlewhit, Flittle, and Knotgrass. These live-action analogs to Flora, Fauna, and Merryweather were quite possibly the worst thing about the first Maleficent, and that’s saying something when you consider how bad Sharlto Copley’s performance as King Stefan was. Here, they’re every bit as stupid, inept, and annoying as they were in the first film, and Maleficent: Mistress of Evil even tries to create a depth of feeling for these nincompoops. However, Jolie has quite possibly an even more difficult task this time around. In Maleficent, she went from an innocent girl in love to a vengeful, scorned woman. She then transformed again into a complex, still-healing being capable of love, having found it in the form of the young Princess. In Mistress of Evil, we’re shown that Maleficent still has a lot to learn; she can’t even smile and offer greetings without coming off as creepy and intimidating. She loves Aurora and thinks of her as a daughter, and the sentiment is mutual, but she still has trouble keeping her cool when discussing nearly any topic with her. She doesn’t have as many showy moments, like when she had her wings sheared in the first film or her speech to the comatose Princess near the end. But overall, Jolie displays even more nuanced acting in this sequel. I never thought about her much before these films, but wow, I’m convinced she could do just about anything.

Geoff Zanelli provides Mistress of Evil’s musical score, and while it’s not quite as good as James Newton Howard’s for Maleficent, it is beautiful. Score tracks from the first film are worked in, and there are some really nice new ones too. Mistress of Evil has some gorgeous visuals, and I mean even better than in the first one. Alstead is a magnificent kingdom, the cavern of the Fae is a unique, stunning creation, and all of the costumes are amazing. Everyone looks great in this film, and I prefer the costumes to those in the first. There’s some really good dialogue in Mistress of Evil, but, as with the first film, there are a lot of corny and stupid lines too. The cast really elevates this material that, on paper, wouldn’t be very good.

Maleficent: Mistress of Evil features a fantastic cast, gorgeous visuals and nice music. Some of the original film's lesser aspects are improved upon, while others are still present.