REVIEW: She-Hulk: Attorney at Law – Season 1, Episode 4 “Is This Not Real Magic?” 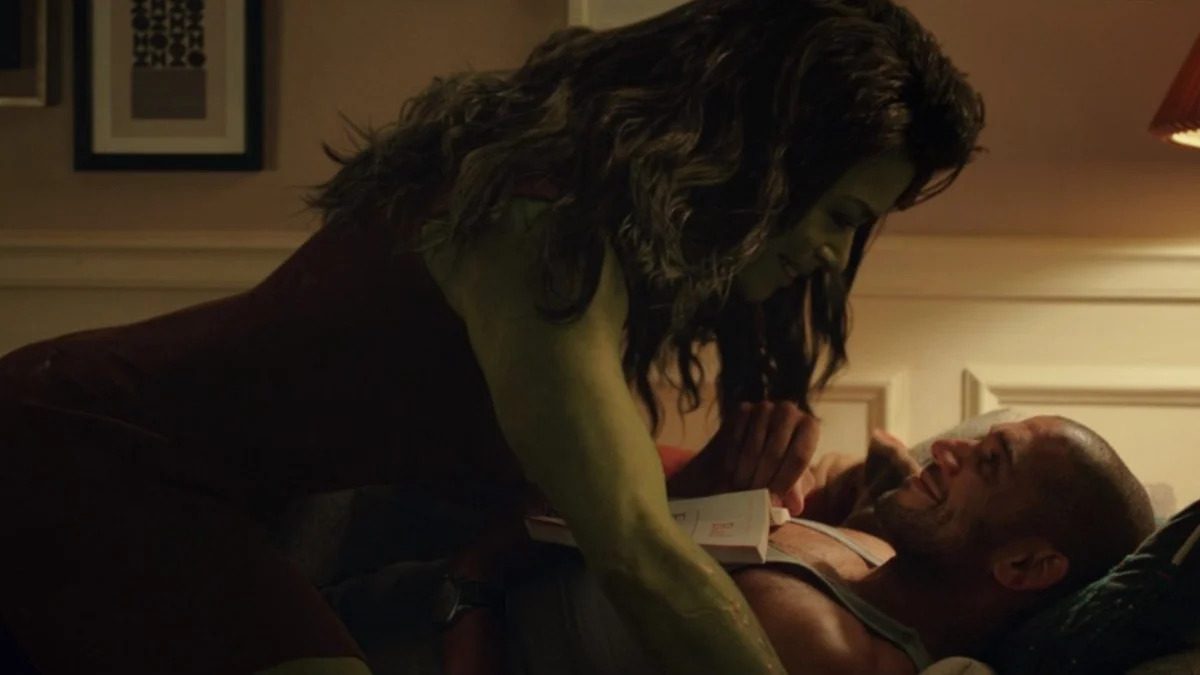 “Is This Not Real Magic?” feels more like the kind of episode the team behind She-Hulk wants to make. It’s more stand-alone than any of the previous installments, and it focuses on Jen’s personal life and how being She-Hulk complicates it, sometimes in ways she didn’t expect. That isn’t to say it’s particularly good; it’s very dumb in a lot of places, Wong once again acts entirely out of character (bar a few of the lighter moments), the threat posed by the villain is non-existent, and the writers live up to their admission of not knowing how to craft a courtroom scene. But there are some good ideas, Jen comes off much better than she had previously, and some of the humor is genuinely funny (some of it).

Wong hires Jen to sue an errant magician to keep him from using magic without proper authorization. Nikki encourages Jen to create an online dating profile as She-Hulk.

The set-up for “Is This Not Real Magic?” is what looks like a low-rent magic show that wouldn’t even make it to the seedier Vegas venues. A magician named Donny Blaze (is this a half-assed Ghost Rider reference?) is performing weak tricks like changing the color of roses, and the audience looks like they’re sitting in a DMV waiting room. This is effective; magic or not, we’ve all seen performances like this where the guy on stage is way too animated for the boring stuff he’s doing, and we all just want it to end. But Donny’s manager encourages him to up his game, so Donny reluctantly takes out a sling ring and creates a portal, through which he transports a drunken Woo Girl. Fortunately for her – and unfortunately for Donny – she ends up at the Kamar-Taj just as Wong is catching up on The Sopranos, prompting the Sorcerer Supreme to call a lawyer.

That’s Jen’s case this week: Wong wants to sue Donny Blaze for using magic without his permission. This could have been interesting, raising questions like whether anyone can own the rights to magic use and at what point safety concerns should supersede someone’s freedom. But “Is This Not Real Magic?” is too dopey and silly for that, instead turning the case into a long, unfunny joke where the obnoxious Donny Blaze performs magic tricks in court – along with his lawyer, who behaves like he doesn’t take the case seriously either. There are a couple of lines about how no one can own or copyright magic, but it’s never explored; it’s presented and dropped so Donny can do something “funny” again. This is further proof that Jessica Gao was right about her team’s ineptitude at courtroom drama because the entire scene is played for laughs, and it isn’t even comedy based on the legal profession. And the resolution is a complete letdown, with Donny agreeing to their proposed injunction during a super-fight with demon-bat-lizard-whatever things.

Even worse is the moral dilemma this creates due to Wong’s asinine antics on this show. Over and over, Wong disregards any kind of safety or discipline when he uses magic. Last week, he admitted to taking Abomination out of prison so he could cage-fight him and hone his magic skills. In “Is This Not Real Magic?” he threatens to use his abilities in a petty fight with Donny brought on by a childish insult. Setting aside that this is so out of character he doesn’t feel one bit like the Wong from the movies, it raises the question of why Wong should be the authority on magic use. Sure, he’s the *eye-roll* Sorcerer Supreme, but he’s also demonstrating how cavalier he can be with magic while judging Donny. But it’s never acknowledged that Wong is doing anything wrong, so his character isn’t even being ruined to serve a compelling story. He also continues to be a moron who doesn’t understand how the real world works, which is also unlike the Wong we know. Unsurprisingly, they only get him right when it comes to (some of the) comedy; I found his catching up with TV funny, particularly his frustration with the drunk girl constantly spoiling The Sopranos for him.

The better plotline in “Is This Not Real Magic?” is Jen’s attempts to get back into dating. After a guy hits on her at a bar, Nikki pushes Jen to plug back into her online dating profile – and to create a new one as She-Hulk. And after a particularly bad date (I laughed when the guy claims to be a “real New Yorker” and, when Jen asks how long he’d lived there, he says, “Fourteen months;” these people are real, and they’d say they were more authentic New Yorkers than I am), she takes Nikki’s advice and creates a She-Hulk profile… and the floodgates open bigtime. This is one of the scenarios from the trailer I was dreading, but it works better than I thought it would (aside from the CGI, which probably doesn’t even bear mentioning anymore). Even as She-Hulk, she goes on a string of bad dates till finally meeting a guy she clicks with – who turns out to be completely disinterested when faced with Jen in her human form. What makes this work is that it isn’t presented as a “men are evil” narrative but more one about the pitfalls of dating in general, as well as the coldness of online dating. The guys who respond to She-Hulk do so for fetishistic reasons as opposed to any kind of personal connection, and that’s because the nature of online dating is selling yourself like a product on Amazon. It’s sad, but it feels real and human, and it makes Jen relatable.

The little things are hit and miss. I liked the feel of the She-Hulk dates, how she’s trying to be light and playful and get into the spirit of it, only to be burned each time. I was also glad to see Mark Linn-Baker back as Jen’s father; he’s portrayed again as loving and protective, and it doesn’t matter if his daughter is She-Hulk and can take care of herself because he’s her dad. So far, they’re using him just enough so that he doesn’t become tiresome. I also found the drunk girl mostly funny, especially when she’s with Wong. On the other hand, everything with Donny Blaze is lame, and he and his cohorts drag the episode down quite a bit. I understand that these guys are annoying in real life, but he’s a big part of the story, and that’s a lot of loser. Nikki continues to be something other than an actual character; she’s a paralegal whose job is not assisting Jen in legal matters so much as saying sassy things and ending every other sentence with “Girl!” And she reveals that she’s gay in one of those patented Disney half-second clips that can be easily removed for the foreign market. It doesn’t matter one way or the other in terms of the show, but it’s so naked in its pandering that you can feel the vibrations from the writers high-fiving each other over breaking the barrier they’ve convinced themselves exists. And not only is Titania back, but she’s suing Jen for copyright infringement because she claims she holds the patent to the name “She-Hulk.” (Is the Wong/Donny Blaze story supposed to have been a set-up for this? I hope it works out better than that did.) This is another cool idea with a lot of potential, but She-Hulk doesn’t have a great track record for exploring these right now.

She-Hulk: Attorney at Law – "Is This Not Real Magic?"

“Is This Not Real Magic?” is an okay episode with one surprisingly human and relatable storyline and a less-surprisingly stupid and poorly-executed one. Wong doesn’t act like Wong, interesting questions are never explored, and the resolution is pat, but Jen’s dating escapades are honest and endearing.