After a longer-than-usual two year wait, season 3 of Netflix’s hit Stranger Things was released last Thursday, July 4th. While I had some patriotic festivities to partake in for Independence Day, you can be sure I was eager to start binging the new season after work that Friday. While much of Stranger Things season 3’s marketing has featured the tagline “One Summer Can Change Everything,” I didn’t realize just how true that would be. Let’s dive in.

Stranger Things season 3 follows several new plot threads, including Mike and Eleven’s romance now being in full swing. This distresses Hopper, who isn’t ready to see his adopted daughter grow up just yet. Dustin chats over radio waves using an invention he calls Cerebro. However, matters are complicated when Cerebro picks up on a Russian message being transmitted, leaving it up to Dustin, Steve, and newcomer Robin to crack the code. Nancy and Jonathan are working at the local newspaper, the latter developing photos and the former delivering coffee for the reporters, much to her chagrin. Hopper tells Mike he’s been spending too much time with Eleven and to back off; Mike lies to El about this and she goes to Max to vent and have girl time. Joyce notices that magnets around town are becoming demagnetized and suspects something’s up. Nancy discovers some troubling occurrences around Hawkins involving rats and decides to follow up in pursuit of a big story. Billy and Mrs. Wheeler flirt and plan a hot date, but she ultimately decides not to go for fear of hurting her family. Meanwhile, Billy ends up being possessed by the Mindflayer, which is alive and well after all. Eleven tries to find Billy with her powers and sees shocking visions of him tying up his co-worker Heather. She and Max decide to go looking for him. Since El is mad and doing her own thing with Max, Will decides Lucas and Mike should have a “day with no girls” and play Dungeons and Dragons with him. Joyce convinces Hopper to go back to Hawkins Lab with her and investigate.

The girls and boys reunite to solve the mysteries and coincidences they’ve been noticing. This excludes Dustin, Steve, Robin, and Lucas’s little sister Erica, all of whom are trying to infiltrate a Russian base below the town’s new mall. Despite being humiliated and fired, Nancy’s mom encourages her to pursue her story to the end. Alexei, one of the Russians in the base under the mall, tells Hopper and Joyce (through Murray’s translations) what the Russians have been working on. Eleven locates Billy, but in doing so, he and the Mindflayer gain the ability to see and find her. Dustin, Steve et al. escape the Russian base, but are unable to get out of the mall. Dustin radios Mike for help, but the signal is too weak for Mike to understand him. The Mindflayer finds Eleven and her friends in Hopper’s cabin; at first, she fights it off, but it manages to infect her leg. With the help of Dustin and his group, Murray, Hopper, and Joyce make it down to the Russian base. Eleven starts losing her powers. Joyce finds that the portal to the Upside Down has been opened by the Russians; she closes it, with Hopper sacrificing himself in the process. The Byers decide to move away in the end, and they take Eleven with them.

When I watched episode one, “Suzie, Do You Copy?” I found the subplot with Hopper, Mike, and Eleven really annoying. I thought that Hopper and Mike, in particular, were acting a little out-of-character in this episode, and to a smaller degree throughout the season. However, there is sufficient evidence throughout the seasons to suggest that Hopper has PTSD and some of his more extreme behavior is influenced by the affliction. Even aside from that, we can all understand a father feeling like he’s losing touch with his only child. Mike, of course, is going through the girl-crazy stage of puberty, but his antics are annoying nonetheless. I really like Eleven’s arc of self-discovery throughout Stranger Things season 3, and after the events of the finale, I’d say she will have a lot more to figure out. They spend a lot of time talking about how she has defined herself based on her relationships with Hopper and Mike, and season four could well be about who Eleven is without her powers. 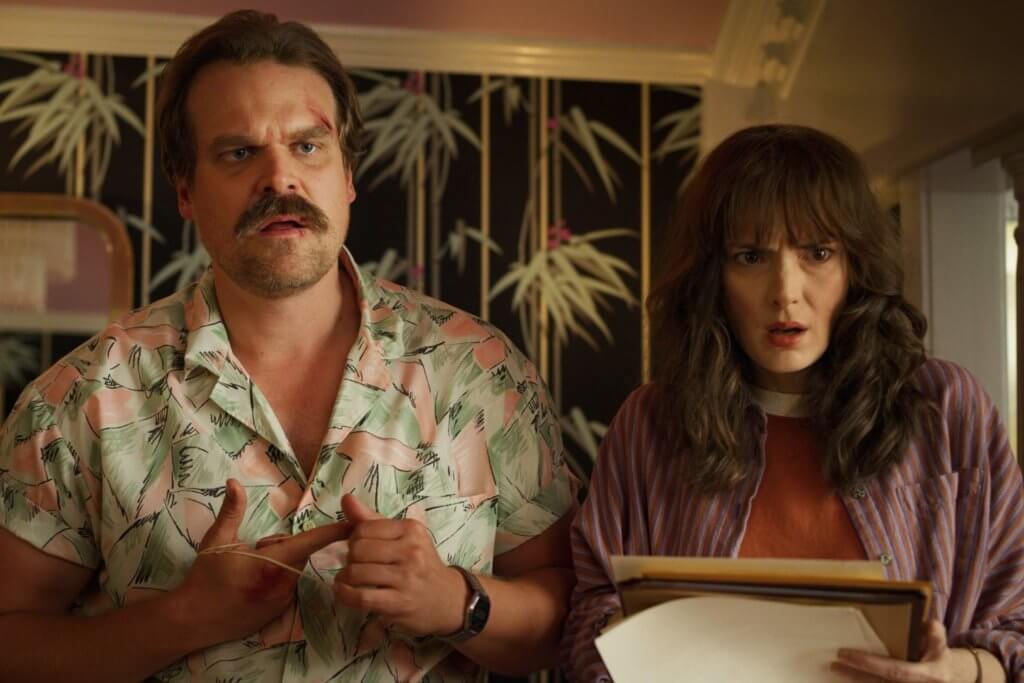 Stranger Things season 3 does for the characters of Billy and Max what Stranger Things season 2 did for Steve. Billy still isn’t a great guy, but this season delves into what has made him who he is. Max’s interactions with the boys, and especially El, are adorable, and this time, she really feels like part of the team. This is also the most I’ve enjoyed Nancy, and I really felt for her when she was dealing with the chauvinist reporters at the paper. Lucas’ little sister Erica (another character I didn’t care for in Stranger Things season 2) gets some great one-liners, and even a couple of touching moments near the end. The new character of Robin is a lot of fun, too. Her interactions with Steve are funny, and her reveal later in the season really caught me by surprise. Dustin’s girlfriend Suzie seems really sweet, and I was glad she proved to be real. Their song was unexpected and, surprisingly, sounded really good. I also enjoyed Cary Elwes as the corrupt mayor, though I almost wish he had gotten more screentime.

I felt awful for Will this season; he’s frustrated with his friends and their girl problems and wishes they could all just play D&D again. It was especially tense when Mike confronted him about “not liking girls.” I’ve been thinking for a couple of years that Will would be revealed as either gay or asexual, and now I really feel that it will come up in season four. I enjoyed the banter between Hopper and Joyce this season, and his crush was really sweet. This season, at least for me, has the best finale yet, and also the most emotional. I could barely believe that the Byers family was really going to move and that Hopper was gone. Of course, it’s possible that he may have survived; the post-credits scene implies as much. However, his sacrifice was still quite an impactful scene. His final speech is one of my favorite moments in the entire series, and the footage accompanying it is absolutely perfect. 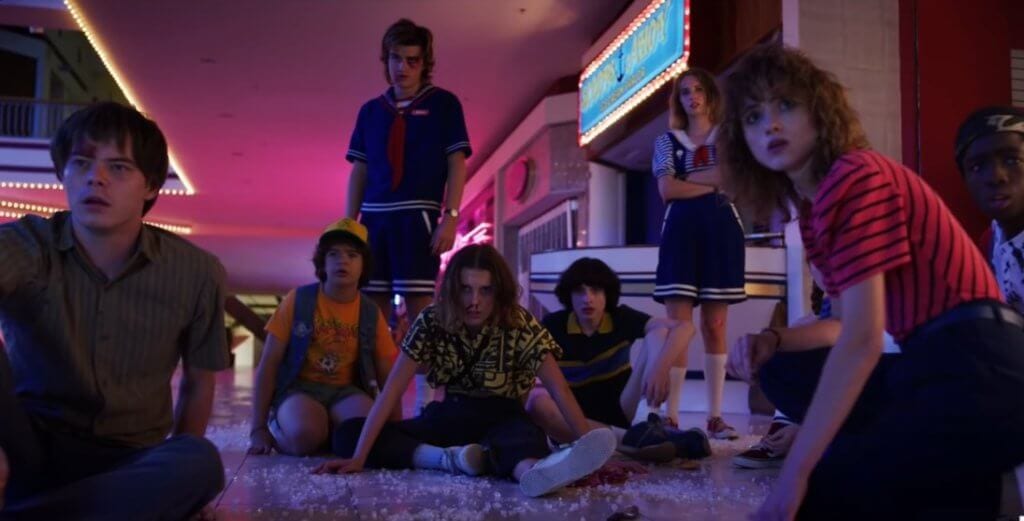 I have a bit of a problem with Karen Wheeler, her friends, and the way they all lust after Billy. The show plays this for laughs because Billy is a heartthrob and the housewives are bored and restless. However, if the show portrayed the men at Nancy’s job ogling her in this manner, or perhaps a boss treating Robin in this way, it would be a serious plot point about sexism. I think it’s disgusting that these women act like this towards a boy as young as their own children, and even worse that the creators think it’s funny. To add insult to injury, this leads absolutely nowhere, as Karen gets cold feet and Billy is attacked by the Mindflayer. I also don’t like the use of flashbacks throughout the season. It’s not the concept of flashbacks in general, but specifically that they consist of footage we’ve seen before, either from prior seasons or earlier this season. I don’t like being spoon-fed information that has already been revealed to drive the point home; let the audience connect the dots at this point. I do want to mention how good the music and visuals are this season, as they always have been. Every musical cue, from the opening theme to the tune that plays over Hopper’s speech in “The Battle of Starcourt,” is a triumph for composers Kyle Dixon and Michael Stein. Of course, the visual effects are good, and I love the bright and varied use of color the show employs.

Overall, I really enjoyed Stranger Things season 3, and it just might replace the first season as my favorite so far. Although Dr. Brenner is still the series’ best villain, I think the Soviets make for an appropriately imposing obstacle, and they certainly fit the time period. This season satisfyingly develops its characters while introducing new ones, and its mysteries are engaging from beginning to end. I can’t wait to see where season four takes our favorite characters.

Stranger Things 3 introduces a plot thread that goes nowhere with Karen and Billy and utilizes too many flashbacks to scenes we've already been shown. However, it's by-and-large the best season thus far with amazing performances and lovely visuals.