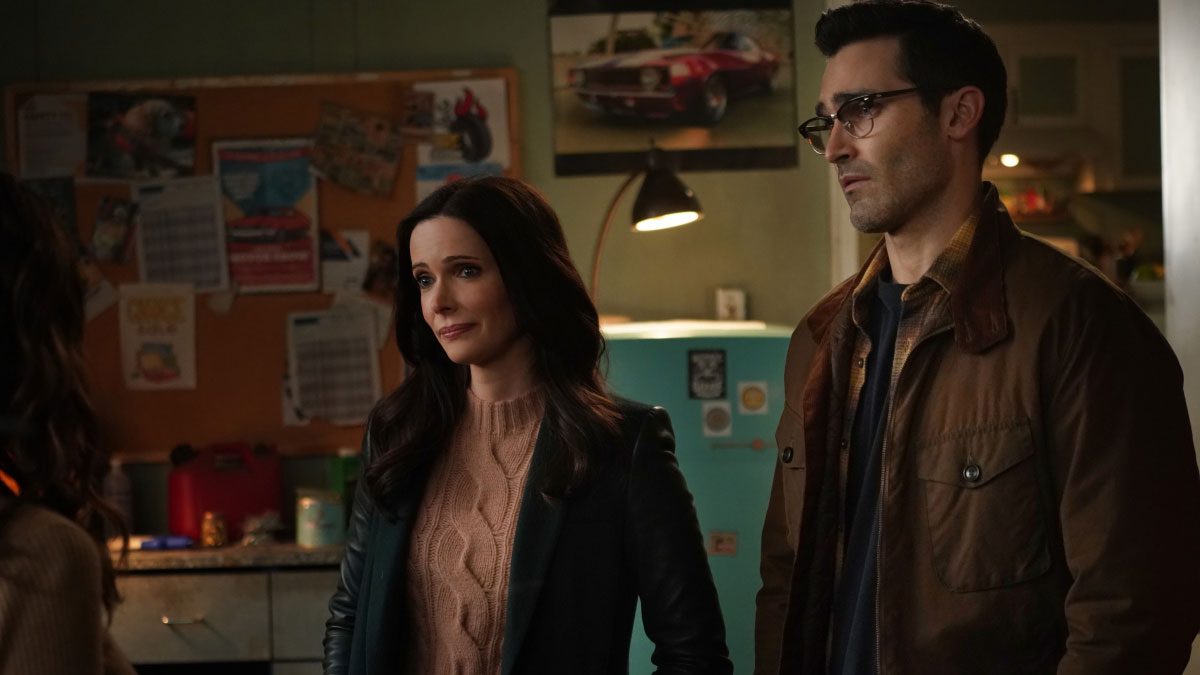 The second season of Superman & Lois heads into the home stretch with “Lies That Bind,” a fun – and surprisingly funny – episode that closes more plot threads than expected while setting up the final threat Superman and his allies will have to face. The trust theme is also advanced, with detail added from new wrinkles that muddy the waters on which truths and lies sail.

John Henry and Sam have found a way to stop Ally Allston from conquering Earth, but the cost is more than Superman is willing to pay. Lana’s anger at being lied to for so long is directed towards someone unexpected. Jon, Jordan, and Natalie, feeling distrusted by their parents, share a secret with each other. Sarah pours herself into music to escape her real-world problems.

The final moments of “Truth and Consequences” lead directly into the opening of “Lies That Bind.” Lana reels from Clark’s revelation, and suddenly, a lot of questions she’s had about her past find answers. She and Pete Ross (who’s got to turn up at some point, right?) survived a devastating car crash because Clark saved them; Clark left Smallville to figure out who he was and what he wanted to do with his life, ultimately becoming Superman; Clark was going to come back for Lana, but she’d moved on with Kyle. And finally, Lana feels unloved – Clark trusted others, but never her. The weight of a lie told over decades is crushing, and when it’s finally exposed, it brings a lot of hurt with it. This is a great scene, not just because of its honesty and humanity, but because it informs the rest of the episode.

The theme running through “Lies That Bind” is how a lie has a ripple effect that touches more people than those directly involved. Lana now knows that Clark is Superman, but as she struggles to get a handle on this, her ire finds a new target: Lois. In Lois, Lana thought she’d made a new best friend, and Lois became her confidant over the year or so since she moved to Smallville. But the entire time, Lois has been lying to her, and Lana feels like the trust she put in Lois – even turning to her when her marriage fell apart – hasn’t been reciprocated. She trusted someone who refused to trust her. But now that she knows about Clark, plus all the other secrets Lois shared with her to salvage their friendship, she’s got to choose whether or not to tell her family. Lana decides not to tell Sarah, but she’s now lying to her daughter the way Lois and Clark lied to her, and it’s a safe bet she won’t be telling Kyle either. She’s now a part of the lie that is eating away at her.

In other words, “Lies That Bind” argues that telling the truth vs. telling a lie isn’t always a simple decision. In lying to Lana, Clark was sparing her the burden of keeping his secret or even choosing to do so or share it. Now she’s caught between lying to her kids or giving them another responsibility they didn’t ask for and shouldn’t have to shoulder. Similarly, when Lana accuses Lois of keeping Clark’s secret from her, Lois says it wasn’t her secret to share. And she’s right; she’d have been breaking Clark’s confidence if she’d told Lana, which is compounded in this case because Clark is her husband. (Although she seemed okay with telling Lana about Jordan; I hope this comes back to bite her.) In the same way, Lana telling Sarah about Clark would be breaking his trust, as well as Lois’. Whatever decision someone makes, they’re betraying somebody, inevitably valuing one person’s trust over another’s. Lana’s decision to ask Clark and Lois to get out of her life is maybe the most sensible one; she can’t change what she knows, but she can decide how much it will affect the bonds she has with her daughters. 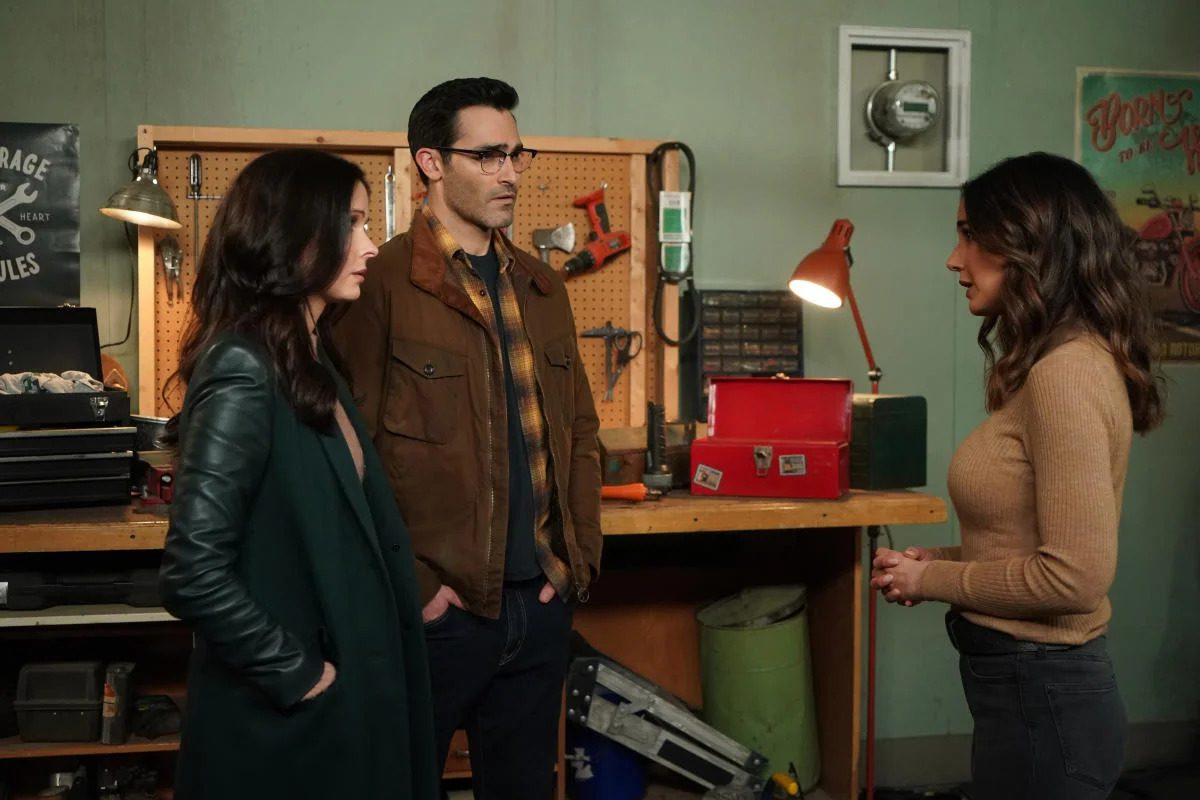 The kids are also feeling the weight of distrust. When Jon is confronted by some of his former teammates who are still salty over losing their football season, he starts ranting about how the world could end soon, which Jordan and Natalie quickly mask because nobody is supposed to know about Ally and her impending apocalypse – in large part because they may piece together that Jon has a tie to Superman. The kids all have a burden similar to Lana’s: they know things they must keep secret, even if it hurts them. However, they’re also painfully aware that, despite forcing secrets like this on them, their parents don’t completely trust them and hide other things from them. So they do what comes naturally, especially to teenagers: they come up with secrets of their own to keep from their parents, choosing instead to trust each other. Natalie’s super suit is more than just a way to get back at the adults, though; it’s the symbol of a bond forming among the three kids, all of whom are more honest with each other than anyone else is being. And when the parents inevitably find out, what leg will they have to stand on with their children?

This give-and-take shows up in the main plot as well. Sam and John Henry have figured out a way to close the portal to Bizarro World, saving our Earth from Ally. The problem is, that would force Bizarro World to suffer under her rule, and while Sam and John consider that a practical solution, Superman will have none of it. He won’t sacrifice innocents to an all-powerful despot without at least trying to save them, even if that means risking his life and trusting Tal, a man who tried to kill his family. But is this really the better option? If Tal proves untrustworthy, Superman may have just made things worse. And once they manage to destroy the pendant and rescue Bizarro World, Ally is trapped here with vengeance on her mind and a newly-revealed power Superman may not be able to overcome. In refusing to compromise on his morals, Superman may have just doomed his own world in favor of another, saving them by sacrificing us. Clark’s worldview is being directly challenged on all fronts, and the notion that his pie-in-the-sky moral absolutism could be more dangerous than Sam’s lesser evil compromise is an interesting thread to pull. 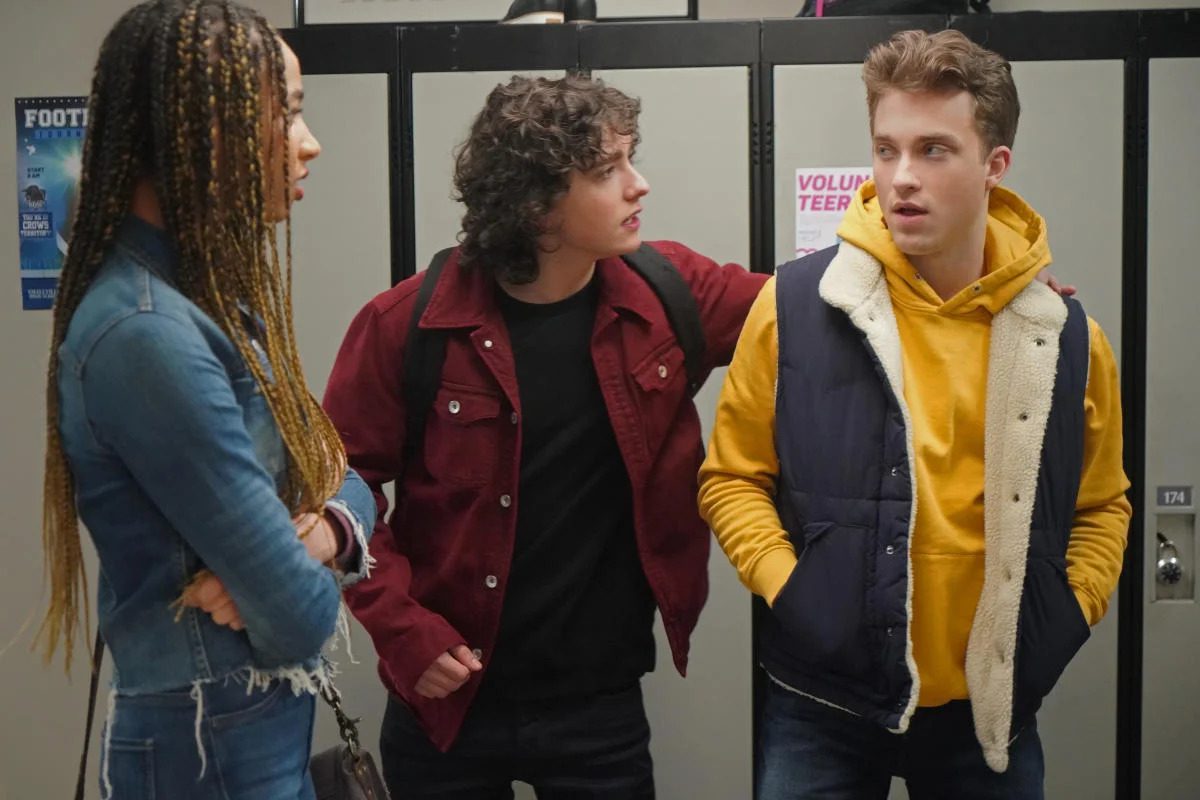 Thematically, “Lies That Bind” is pretty heavy, and destroying the pendant while revealing Ally’s Parasite powers is a big deal that establishes the stakes for the last three episodes. But it’s also very funny, even more so than usual. Some of the lines elicited big laughs from me, even simple ones like Clark guessing who Lana hates more than him. I greatly appreciated Natalie and Jordan’s ruse to cover for Jon’s outburst; who’d have thought a Greg Berlanti show would make fun of Greta Thunberg and global warming? And even though it’s suggesting he might be wrong (though I doubt he will be in the long run), Superman’s response to the plan to seal the portal is another instance of the show’s creative team understanding the character. Of course, Superman would refuse to damn a whole world to someone like Ally; the slight hope that he could save everyone would be more than enough for him. Kyle urging Sarah to explore her talent is sweet, and I love seeing Jordan, Jon, and Natalie teaming up for adventures without their parents. Jon shouting about the end of the world is kind of dumb, and once again, Lois can’t stop screaming at people, but still, “Lies That Bind” is a good episode.

“Lies That Bind” is a funny episode that drives bigger wedges between the main characters and sets the stage for the final run of the season. One moment is too silly, and Lois is still annoying, but the trust theme is expanded on, and, once more, Superman acts like Superman.