When I saw the trailers for The Call of the Wild, they made absolutely no impression on me. I didn’t and still don’t know much about the Jack London novel, and nothing about the marketing scheme seemed at all remarkable. The presence of Harrison Ford didn’t do much to bolster my interest, as, sadly, none of his recent performances that I’ve seen have impressed me. However, I ended up seeing it with some of my family who were interested, thanks to Ford and our shared love of animals. Let’s have a look at director Chris Sanders’ foray into live-action film making and see how it stacks up.

The Call of the Wild stars Buck, a big, loving dog who just can’t be controlled. When Buck acts up and ruins a birthday party for his master, he’s put out on the porch, which inevitably leads to him being stolen. Buck faces bad masters and good, cushy lifestyles and brutal work, love, and abuse. His path seemingly stops with John Thornton (Harrison Ford,) a kind man with similar sadness in his past. Can Buck ever truly listen to the commands of a master over the call of the wild? 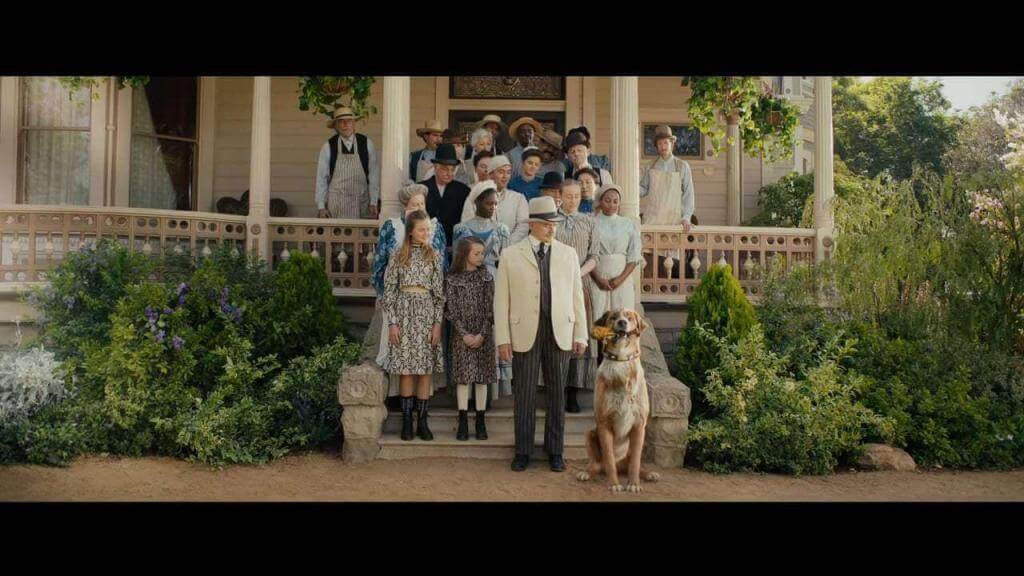 I went into The Call of the Wild mostly blind, having never read the book and only having seen a trailer that revealed very little. I had several assumptions about this film, mainly that Thornton would be the film’s lead and point of view character. Ford narrates the film, but his character doesn’t appear for about the first half-hour, and even after that, it’s longer still before Buck moves in with him. It may be a stretch to call this a flaw, and again, I don’t know how this went in the book. But Ford was advertised as being the main attraction, so I had expected The Call of the Wild to follow him even more than Buck. I love animals, but I have trouble enjoying animal-based movies as much, especially CGI dog movies. So when I realized that Buck, who isn’t realistic or convincing at all, was the film’s main focus, I was concerned. Buck is a CGI model of director Chris Sanders’ family dog Buckley, a St. Bernard-Scotch shepherd mix, just like Buck in the novel. Like most of the motion capture I’ve ever seen, I admire the concept, but the result is creepy and distracting. I think there are really two possible solutions here: you could use a real, live dog and accept the limitations on movement and acting that go along with that. On the other hand, they could go all-in and animate a hyper-stylized dog. Either way could work or be a disaster, but I feel like we’re at the point where we need to accept that CGI dogs modeled on the real thing don’t work. My priorities when watching a film are always to engage with the story’s themes and connect with the characters, so I hate to harp on something superficial like a visual effect. But in this movie, the dog is the main event. He’s always there on camera, and the fact that he’s creepy, not cute, and hard to accept as a dog is very distracting. The same can be said of the bear, wolves, and other dogs in the movie. For a film called “Call of the Wild,” and which features so many animals, it’s very important to make them believable (which is different from realistic) so that we can get invested in the characters and their journey. I think it’s a shame they couldn’t commit entirely to a realistic or unrealistic approach with Buck and his furry cohorts, as either would have been preferable to this mishmash. We’re left with a dog that is meant to look real but doesn’t, can’t speak but knows what alcohol is and understands Thornton’s loss, who is too smart to be a dog but not smart enough to be a person. 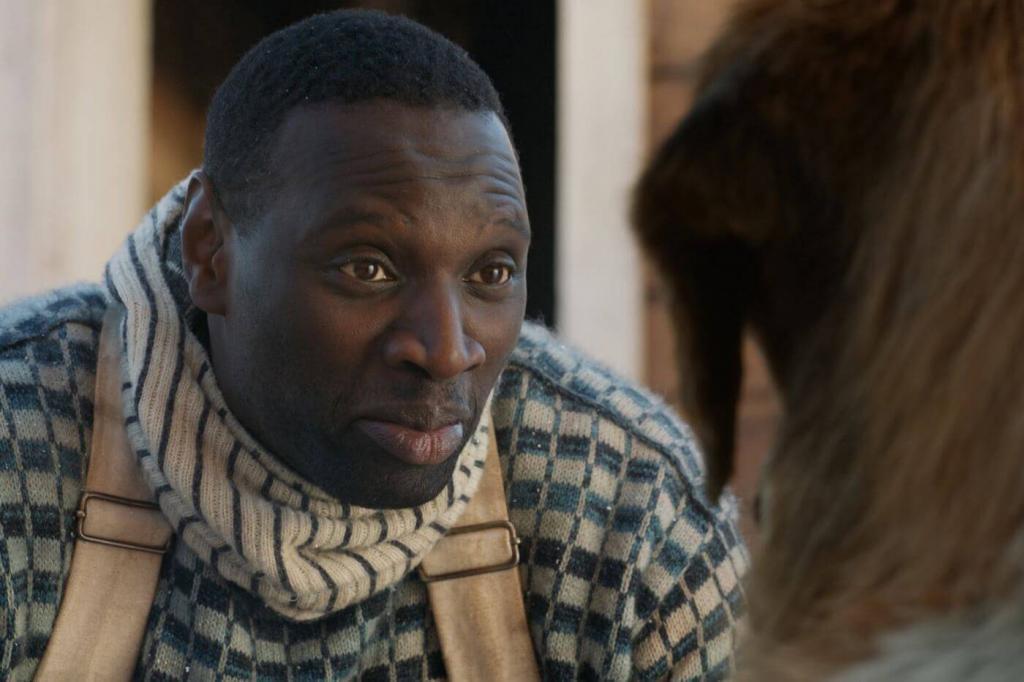 And as for our human players, what we have here is a mixed bag. Harrison Ford gives his best performance of late, and while for the most part that isn’t saying much, I’m just glad he doesn’t sleepwalk in The Call of the Wild. In Ender’s Game and the newest Star Wars trilogy, he just looks glazed-over and confused. In this film, he’s present, emotive, funny and most importantly, sincere. I quite like Omar Sy as Perrault the mailman. He also shows a range of emotions and forms believable bonds with all of his dogs, which is doubly impressive, given that they’re computer-generated. Cara Gee as his companion Françoise shows a bit of character growth in her limited screen-time, and she’s also pretty funny. I enjoyed seeing familiar faces like Bradley Whitford and Karen Gillan, especially as I didn’t know they would be in the film. I’m sad to say that another big disappointment for me personally was Dan Stevens as the villain. Aside from the Beauty and the Beast remake (which wasn’t even his fault), I usually like him a lot. I first saw him in Downton Abbey, and, as Cousin Matthew, he quickly became my favorite character. He’s also performed well in Legion, Kipo and the Age of Wonderbeasts, The Man Who Invented Christmas, and Night at the Museum: Secret of the Tomb (don’t judge me), among other things. In short (too late, right?), Stevens’ performance is fine for what it is, but the character he plays is too ridiculous to take seriously. Although he does pose a physical threat to Buck and Thornton, he’s never menacing because all he does is yell and act like a fool. He should be a good villain because he’s dangerous and has a history both with Buck and Thornton, but they undermine any of that potential by turning him into an inept, “evil for the sake of it” Saturday morning cartoon villain. Much like with the animals, I feel like there are two ways they could have fixed this. For one, don’t show this character again at all once Buck is with Thornton. Honestly, the story doesn’t really *need* him by this point anyway. Likewise, they could have kept his role as is, but make him a little more serious. Maybe they could have expanded on his relationship with his two companions and his motivation for wanting the sled dogs. It wouldn’t have taken a lot to make this character a compelling villain, as some of the basics are already here. Such a waste. 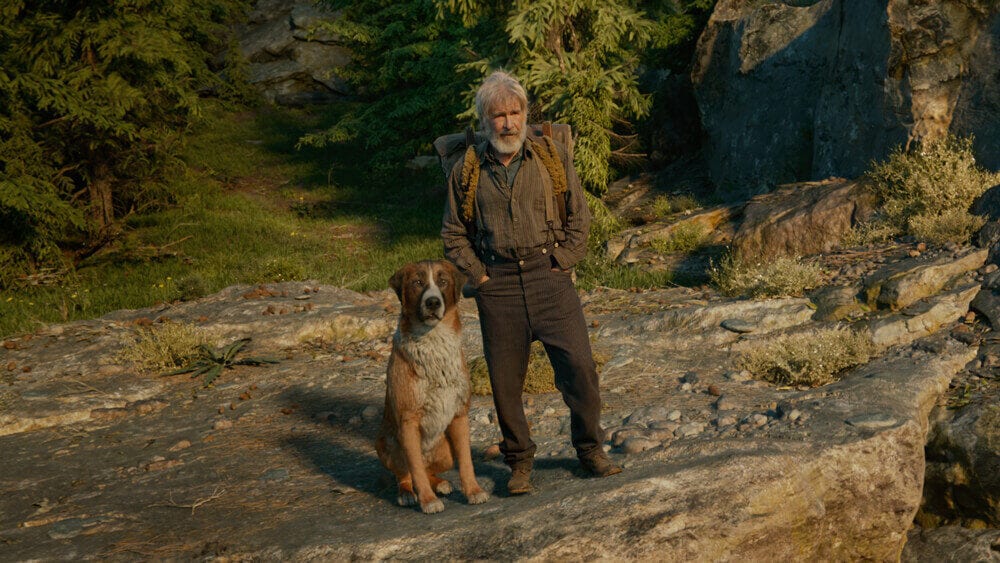 The Call of the Wild’s cinematography is absolutely gorgeous. The snow, rivers, and towns, and the Yukon mountain range, are all marvelously shot, and the foliage practically glows in the sunlight. The original score by John Powell, who I love – and you should too, by the way – is pretty darn good. No surprise there. It’s not among his best work, such as Kung Fu Panda, The Road to El Dorado, and Dean DeBlois’ and Sanders’ own How to Train Your Dragon, among others. However, it suits the film well, and it’s pretty. As for Sanders himself, I guess I got about what I expected: a mixed bag. The film looks great except for when it doesn’t, the acting is good when it’s not busy sucking, and some jokes and tender moments land while others are painfully distracting. Once I would have cited him as one of my favorite directors. Lilo and Stitch and How to Train Your Dragon are incredible for totally different reasons, and they’re both animal movies like this one. I also firmly believe his vision for Bolt would have been more interesting than the final film, if not better overall. However, The Croods was childish and superficial. This led me to believe that Dean DeBlois was the one nailing characters and their relationships in their collaborations, while Sanders was the visual guy. As an aside, given Sanders’ troubled past with Disney (which culminated in his firing from and the reworking of Bolt,) I can’t help but wonder how he felt when 20th Century Fox was purchased and re-branded by Disney, making this a Disney film in all but name.

Overall, I enjoyed parts of The Call of the Wild. The visuals, acting, and writing are all a bit of a mixed bag. The film’s music is lovely but nothing life-altering, and I would say I liked more about the movie than I disliked. It’s worth seeing The Call of the Wild for Harrison Ford and some of the other actors, as well as nice music and gorgeous cinematography. This being said, I wouldn’t fault anyone for waiting to rent or stream this one.

The Call of the Wild

It’s worth seeing The Call of the Wild for Ford and some of the other actors, as well as nice music and gorgeous cinematography. This being said, I wouldn’t fault anyone for waiting to rent or stream this one.

This isn’t the first Call of the Wild movie there was a few animated cartoon movies that came out in the early to mid 90s and Several other live action movies including 1 from 1997 Directed by Peter Svatek and a live action TV series in 2000!