“Thank you, Captain America, but this belongs to you.” 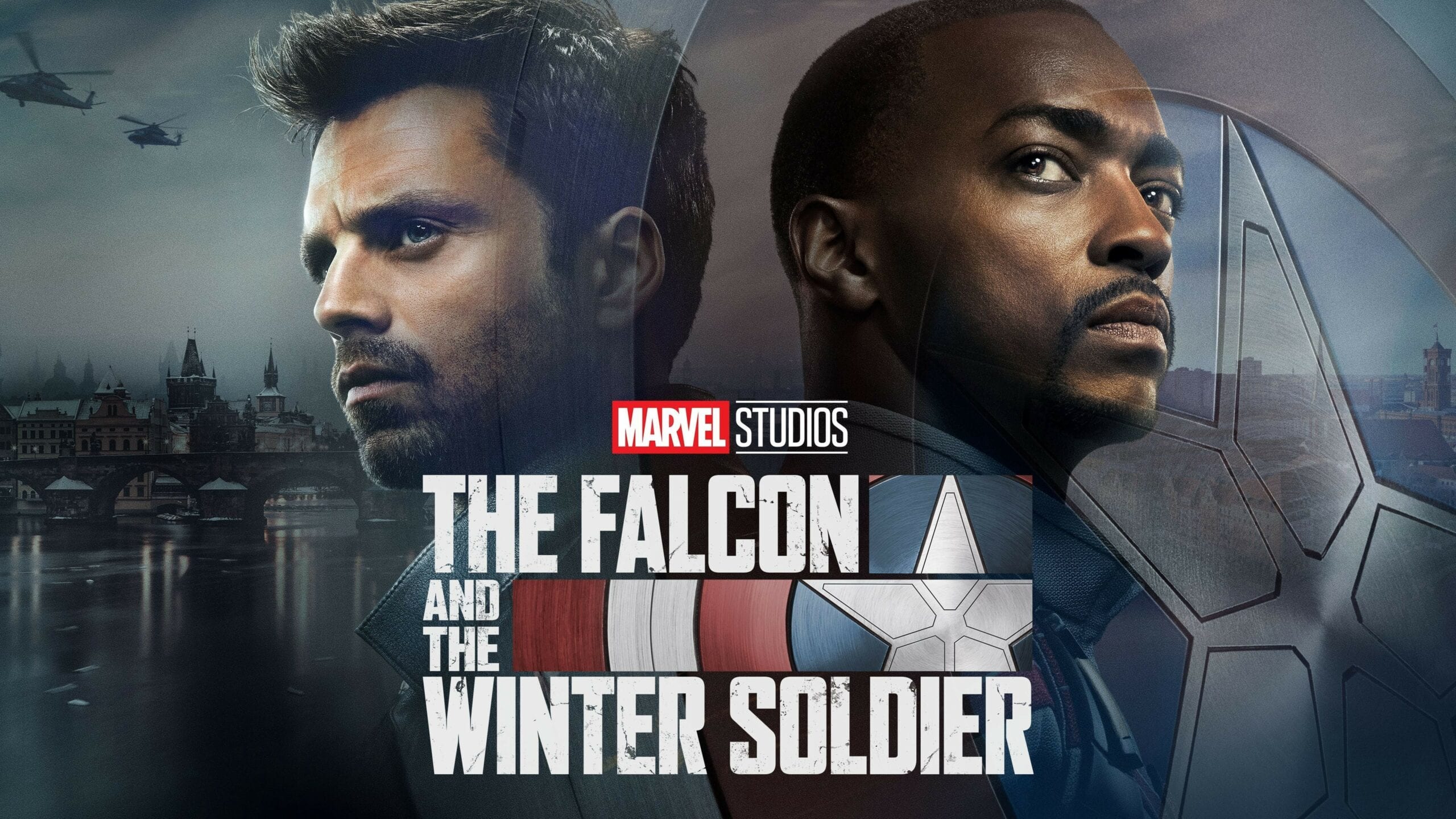 The Falcon and the Winter Soldier is the second Marvel show to step up to Disney+’s plate, and whether it’s got a tough act to follow is sort of up in the air. Some (myself included) liked WandaVision quite a bit, but for others, the finale – which, admittedly, dropped the ball on some things – disenchanted them from the unique show’s spell. This one is a more straightforward series than its predecessor, and in the pilot episode, titled “New World Order,” it latches onto familiarity and iconography to immerse the audience in the Marvel Universe again. Sometimes, this works; sometimes, it doesn’t.

Sam Wilson resumes his Falcon guise as a contractor for the US military. In his downtime, he tries to keep his sister’s cooking business afloat while holding onto his family’s property. Bucky Barnes seeks to make amends for his actions as the Winter Soldier and create some semblance of a normal life for himself. Meanwhile, a budding terrorist group rises in prominence, and Sam and the government decide how best to honor Captain America’s legacy.

“New World Order” sets the stage for The Falcon and the Winter Soldier, and that’s pretty much all it does. It’s more about establishing where the title characters are after returning from oblivion and, perhaps more importantly, losing their mutual best friend. Interestingly, they both become successors to Cap in their own ways. Sam returns to the military in an arm’s length capacity like Cap did; SHIELD is gone, so he acts as a contractor, pulling missions that can’t officially be sanctioned. At home, he’s trying to keep his sister from selling his parents’ boat, one of the few remaining pieces of his childhood. In other words, he’s clinging to his past in the way Steve did and finding that there may be little he can do to hold onto it. Bucky, meanwhile, is adapting to the present, learning how to forge an identity in the modern world. He’s putting his past as the Winter Soldier to rest, and he’s learning newfangled things like online dating. Both are adrift, lost souls looking for a tether.

And both are failing to find one. Sam tries everything to get his sister the money she needs to avoid selling the boat, but the bank won’t give him a loan. The realities of the present overcome his yearning for the past, and the old-fashioned ideals of honor and loyalty are diminished in the wake of a changed world – specifically by Thanos and the five-year hiatus he put half the universe on with a snap of his fingers. Everyone wants a picture with the Falcon, but that and a nickel won’t get you a cup of coffee anymore. On the other hand, Bucky can’t escape his past, no matter how deeply he dives into modernity. He’s told to start trusting people, but this advice comes from a psychiatrist who monitors him for the government. He befriends an old man, but does so out of guilt because he killed the guy’s son as the Winter Soldier. He goes out on a date, but cuts it short because his self-loathing won’t allow him to enjoy himself while his victims suffer.

In other words, both are failing to be Captain America. The Falcon and the Winter Soldier roots itself in Steve Rogers’ legacy while making it clear that his successors are not living up to it. Sam gives up Cap’s shield and any claim to his mantle, believing it to be Steve’s and Steve’s alone. And it never even occurs to Bucky that he could be worthy of it; he doesn’t once bring up his best friend, even in casual conversation. But the show seems to be making the argument that the world needs Captain America, or at least a figure like him. The opening action sequence is reminiscent of both the boat rescue in Captain America: The Winter Soldier and the train fight in Captain America: The First Avenger, and the rising terrorist group is a bunch of globalist nuts who want open borders and will kill to get them – putting them in the same place as Hydra under the Red Skull. (“I have seen the future, Captain! There are no flags!”) And, while Sam and Bucky deny the problem, the government uses it to introduce their new Captain America to a press conference even bigger than the one that saw Sam pass up the role.

I assume this is where The Falcon and the Winter Soldier will go next. The vacuum Steve’s absence created will be filled by someone, and if his chosen successor doesn’t do it, the wrong guy will. At least, that’s where I hope it goes; the other possibility is that they make this about race, which would be a huge mistake. Why make a black character the lead in a superhero show and make it about him being black instead of his character arc, his growth as a hero, and his struggles with responsibility? And where would that leave Bucky? What I’d prefer is that the new establishment Cap is corrupt in a way Steve and Sam aren’t, beholden to the state instead of the Flag. And that may be what happens; with the exception of one obnoxious entry (and an unnecessary and, ultimately, meaningless scene), the MCU has mostly stayed away from that sort of narrative. I know things change, especially lately, but it would be wise of them not to rock that particular boat.

All this focus on Sam and Cap’s mantle leaves you to wonder how Bucky fits into the main story of The Falcon and the Winter Soldier. I liked his scenes in “New World Order,” but other than thematically, they didn’t connect to what Sam was doing, and Bucky feels like the subject of a subplot rather than the co-lead of the series. Moreover, and this was a worry I had when Disney released that trailer in December, neither of these heroes seems capable of carrying a show. I don’t think that’s necessarily the fault of Anthony Mackie or Sebastian Stan, who play their parts as well as they always have. I like Sam and Bucky, but they were designed to be supporting characters, and they don’t show the charisma or magnetism to draw you into a story yet.

That could be because not much happens in “New World Order.” This is strictly set-up territory, and while that’s understandable to a point, they could have made the pilot episode a little more arresting. The actions scenes are good and have a very Russo Brothers feel, but Sam’s is watered down by the direct comparison to those earlier ones with Captain America (which is kind of why I don’t like legacy heroes in the first place; they end up just cheapening both characters). And Bucky’s is a dream, as well as a flashback to his time as the Winter Soldier. They function to help establish the differences in the characters – Sam’s is a rescue mission, while Bucky’s is an assassination – but they ultimately hold little weight. The new villainous group also isn’t particularly interesting; they’re just masks and a symbol at this point. I’m okay with a slow burn, but you have to give people something to whet their appetites, and if you aren’t an MCU fan, I don’t see you finding much reason to stick around for more.

“New World Order” gets The Falcon and the Winter Soldier off to a decent but rocky start. The emotional and thematic resonance of Sam and Bucky’s stories work, and the action is fun in the moment, but there’s a weightless feel to the episode, and neither of the stars has the necessary spark to lead their own story.

The Falcon and the Winter Soldier – "New World Order"

“New World Order” gets The Falcon and the Winter Soldier off to a decent but rocky start. The emotional and thematic resonance of Sam and Bucky’s stories work, and the action is fun in the moment, but there’s a weightless feel to the episode, and neither of the stars has the necessary spark to lead their own story.

Yeah, I hope that holds up. I like the idea of them doing a spy series with Marvel characters.

I liked it, though I was disappointed at the lack of them teaming up together. Personally I love them together and I think they have some of the greatest chemistry in the MCU so I was glad to hear they were teaming up. I really hope the US agent will be a bit more subtle then he was in the comics, maybe a genuinely good person who believes he must carry out orders no matter what they are. I also doubt they’re delve too deeply into Falcon being black. I also was glad that they’re going to make it about Him earning the shield.
What I really want is him to, in the end, realize that Captain America is gone, and while he might take over his job as the leader of the avengers and America’s hero, he needs to do that as Falcon, not as Captain America.

I would love that, and I think that’s a great message. You’re good enough to rise to the occasion yourself; you don’t need to chase someone else to do it. I’m hopeful it will get better, and I’m more than willing to write off my problems as first-episode kinks if it does.

I am still very leery of any Disney venture into the world of Marvel. Having actually read the comics I have a wealth of knowledge to draw from on all of the people involved.

The show is called Falcon and Winter Soldier. It would be nice if they were actually together, but this is the first show of the series, so I am willing to see where it leads, as I was with WandaVision. I was only let down at the end…

The introduction of US Agent is kind of scary when I think about it. I hated that entire run in the Avengers with Fake Thor, as well. I was no longer reading the Captain America books. This is not a good line to take if they are not going to have the two people who knew Cap best working together to save his legacy. I love Anthony Mackie and Sebastian Stan. I argue that they do have the personality to carry a series alone if only they are given the right script and plot. This was a good start for both of them. We have to know where they are coming from before we can see where they are headed. I’m patient. I only have Disney+ for a few more weeks. We’ll see.

Yeah, it could work out. I’m sticking with it, and I’m hopeful it’ll find its footing. Maybe once they get together it’ll be more interesting, and they’ll be able to lean on each other as leads a bit better.