REVIEW: The Falcon and the Winter Solider – Episode 3 “Power Broker” 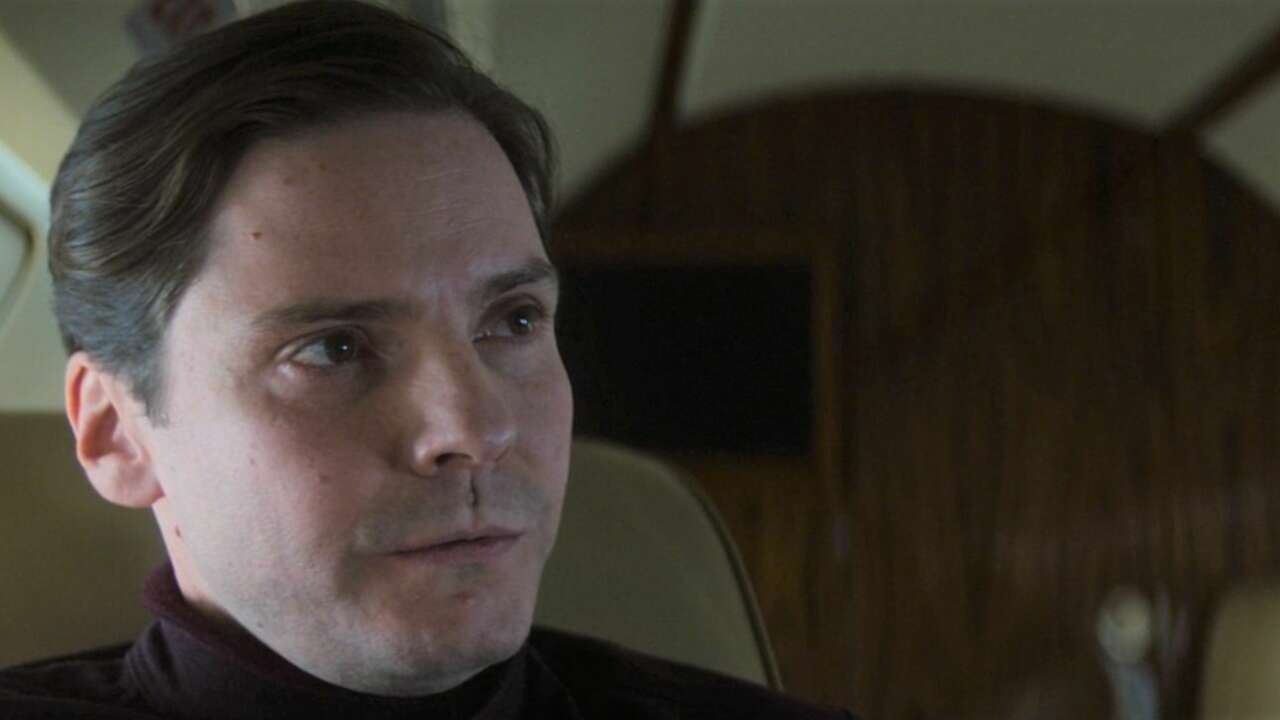 The Falcon and the Winter Soldier is now officially halfway done, and the third episode, “Power Broker,” makes one thing abundantly clear: the people behind this show don’t care. It’s lazy, poorly plotted, flies in the face of MCU history, does potentially cool things for no purpose (which saps the cool right out of them), and allows the two leads to be upstaged and outshone by a new recruit. This is all aside from the lifeless action and flat humor.

Sam and Bucky seek help from Avengers nemesis Helmut Zemo, but being in a German prison, he’s limited in his capabilities. John Walker and Battlestar flex their muscles in their hunt for the Flag Smashers but have to face the limits of a legacy hero.

John Walker has now fully transitioned into a might-makes-right figure, and “Power Broker” begins with him smashing into a warehouse where he technically has no authorization to be and rounding up a group of techie types he believes are helping the Flag Smashers. What he finds is an utter disregard for the mantle he’s taken. No one he and his team have rounded up seems particularly intimidated by him or respectful of him. When the ringleader doesn’t play ball, he asks, “Do you know who I am?” – which comes off as desperate, not awe-inspiring. I like this moment, but since I’m positive the show will not take this to its logical conclusion, my enjoyment is a bit hampered. This is what I think of legacy heroes in general: they’re not the hero they claim to be; they’re just playing dress-up. The guy in that warehouse doesn’t recognize John Walker as Captain America, nor should he. It’s an effective way to make that point, but by the end of the series, it will be negated when Sam takes the role with much fanfare. 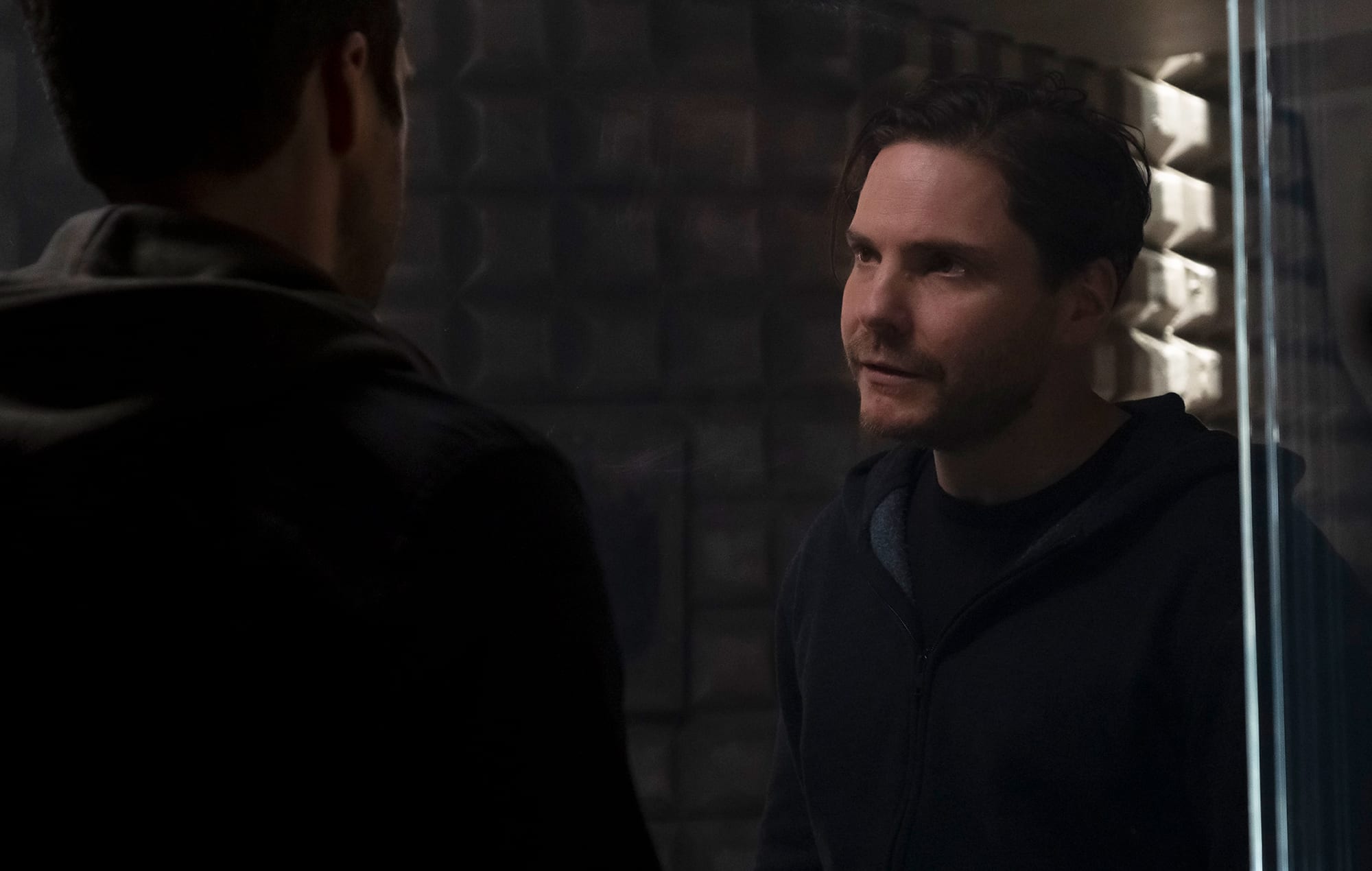 Walker does manage to recognize his unenviable position, at least to a degree, when he acknowledges that Sam and Bucky have “a better hand,” and here, “Power Broker” picks up from the ending of “The Star-Spangled Man.” After suggesting they talk to Zemo, Bucky visits the man who tore the Avengers apart in prison, leaving Sam behind in case Zemo responds negatively to an Avenger’s presence. What follows is a logistically incomprehensible mess of a sequence. Bucky’s meeting with Zemo lasts about thirty seconds, during which Zemo says he’d like to help, but he’s behind figurative bars (it’s actually bullet-proof glass). So Bucky helps him escape… somehow. First, he asks Zemo what book he’s reading, and Zemo answers, “Machiavelli.” Then, after a cut to Bucky arguing with Sam about breaking him out, Zemo opens his book to find a key card to get him around the prison. How did Bucky get a key card hidden in the book Zemo already had in his cell? Is it another book? It looked like the same cover. Maybe it’s the German version of those Barnes and Noble classics series, and they all look similar. But even if it is a different book, how would Bucky slip something in there? He isn’t officially working for any government, and he has no connections beyond Sam, who hates him and is not part of the escape plan. But that’s not all; Bucky also manages to get a message delivered to another inmate that initiates a riot so Zemo can make his way out of the prison. The particulars aren’t given a moment’s thought, and the way it plays out, it feels like we’re supposed to think it’s clever.

Then, Zemo just shows up at the garage where Bucky and Sam are arguing about his escape – a garage that Sam freely entered but didn’t think to ask the significance of until Zemo arrived. The garage belongs to Zemo himself, as does the private plane they board afterwards, because it turns out Zemo was fabulously wealthy and also a baron all along because plot convenience and comic books. Remember how Zemo was a soldier in the Sokovian army, and when his family died during the battle with Ultron, he went into hiding, hunted down Hydra, used makeshift explosives and low-grade weapons, and then tried to kill himself once his plan was finished? None of that makes sense anymore because Helmut Zemo is now Baron Zemo, a good-humored aristocrat with an extensive knowledge of the criminal world and assets that weren’t seized after he was revealed to be the terrorist who murdered a head of state and many other innocent people. He also has a purple mask lying around because he wears one in the comics. Applause. Seriously, though, this makes me angry because the transformation of lowly, hopeless, suicidal Helmut Zemo into supervillain Baron Zemo could have been a great story, but this show relegated it to an Easter egg for comic book fans, zooming past any kind of character development for the sake of moving along a poorly planned miniseries.

A comic book reference that works better is Madripoor, the crime-ridden Asian nation most famous for being one of Wolverine’s stomping grounds. (I wonder if that means Disney acquired the rights to Madripoor when it bought 21st Century Fox.) Zemo takes Bucky and Sam there because it’s the base of operations for someone called the Power Broker, who can lead them to the super soldier serum. Their antics in Madripoor, like almost everything else in the show, aren’t as fun or entertaining as they should have been – a criminal who ends up dead leads them to another criminal who ends up dead, and that leads to the end credits – but they also reinforce that Sam and Bucky aren’t good leads. Every step of the way, Daniel Brühl’s Zemo outclasses them, and he’s by far a more magnetic personality, even though the character is so inconsistent with his Civil War iteration. Also not particularly interesting is Sharon Carter, another of Captain America’s supporting players who flounders without him to share a scene with her. Sharon is on the run now after helping Cap, and she’s become disillusioned with honor and patriotism, instead doing whatever dirty deeds she must to survive. It doesn’t work; Emily VanCamp can’t pull off the bad girl act, and Sharon feels more like a whiner with a chip on her shoulder than a wronged agent. (Bucky’s line about her is perfect, though not, I imagine, in the way they intended it to be.) 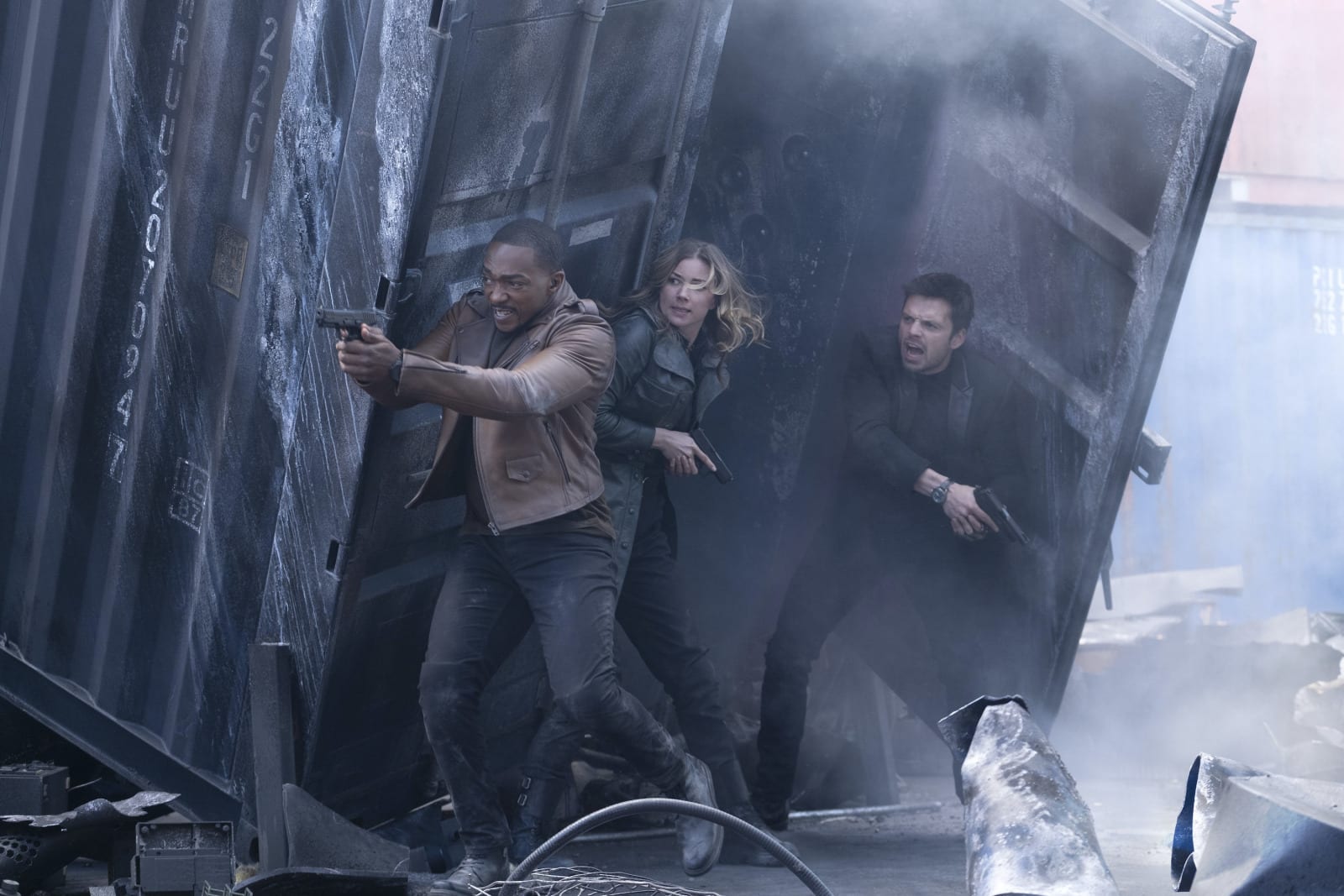 Ultimately, “Power Broker” feels weightless, despite advancing the plot. Sam and Bucky are closer to the serum, but it’s hard to care about any of this. There are a few action scenes, but they’re not exciting or engrossing. Sharon fights off a few of the Power Broker’s thugs, but since we don’t know who he is and don’t much care about her, it’s just a waste of time. Zemo puts on his purple mask, fires a gun, then takes it off again, which I’m sure was supposed to look epic but is just too silly to have any impact, as he clearly wore the mask for fan service and nothing else. This is the same thing I was talking about with the mask and the title and the wealth; why not give him a real reason to don his comics costume so it’s important to the story and the character? The reveals that follow – Sharon is up to more than she lets on, Dora Milaje warrior Ayo wants Zemo’s head, the Flag Smashers are killers now, Sam wants to destroy Cap’s shield – are so rapid-fire that they fall flat. And that’s the perfect summation of “Power Broker;” it throws a bunch of references and information at you in the hopes that you’ll be distracted from how rushed, flimsy, and empty it really is.

“Power Broker” is an empty-headed episode of an increasingly disappointing show. Plot points make no sense and aren’t explained, characters are wildly inconsistent, the action is bland, and a barrage of references to comic books and the MCU movies are a distraction rather than the treat they should be.

The Falcon and the Winter Soldier – "Power Broker"

“Power Broker” is an empty-headed episode of an increasingly disappointing show. Plot points make no sense and aren’t explained, characters are wildly inconsistent, the action is bland, and a barrage of references to comic books and the MCU movies are a distraction rather than the treat they should be.

Aside from Bucky’s bar fight, we saw no real powers. To be up front, I watch this show and yet, agree with this review, which brought up things I didn’t notice. The first two episodes I liked and thought they would stick to that formula of having at least one really well choreographed action sequence per episode. In this one, you could also saw the gun fight was one.

Yeah, these ones didn’t stand out at all, like the caravan scene in the second episode, for instance.