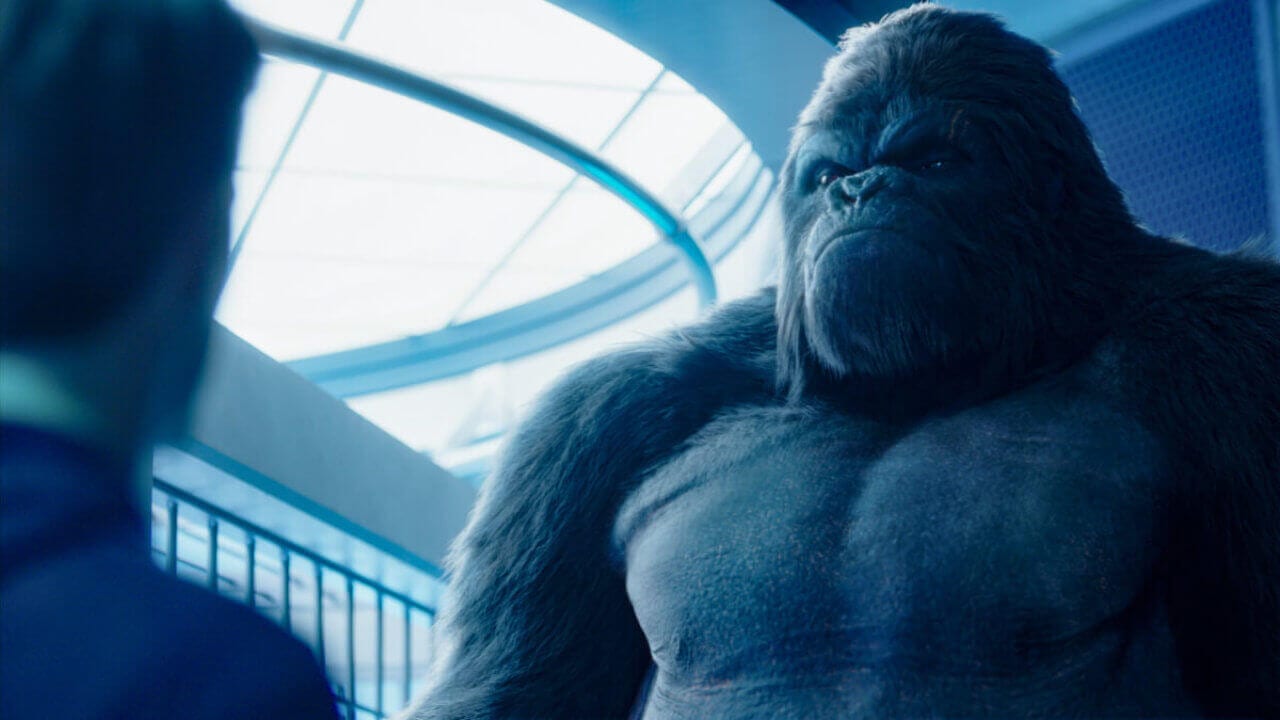 “Grodd Friended Me” is a gratifying return to form for The Flash, good enough to banish the memory of the last two weeks’ duds and reinvigorate a flailing season. It gets back to the moral dilemmas that made the show so fascinating from its earliest days, brings back a great villain (as opposed to an embarrassing one), and pulls the rug out from under us in a subplot, portending some neat story avenues for the remainder of the run (Barry, run) to explore.

Barry attempts to learn all the changes to his world following Crisis, but the experiment lands him in a coma – and inside the mind of one of his deadliest nemeses. Iris realizes that her confinement in the world behind the mirror may be direr than she thought. Nash tries to capture the visions of his doppelgangers that have been haunting him, while Allegra gets a clue as to why he seems to be so familiar with her. Camilla and Chester P. Runk take over for Caitlin and Cisco as the Flash’s backup, but may not be up to the challenge.

“Grodd Friended Me” begins with Barry walking the streets of Central City aimlessly, carrying a bouquet while walking under a highway overpass. It’s a confusing scene, and this puts us in Barry’s mindset because he’s right there with us. When he learns of a metahuman attack on a jewelry store, he leaps into action and finds Hartley Rathaway back to his Pied Piper antics. Rathaway’s moral decline is a result of the changes brought upon by Crisis, and not only is Barry confounded by this backslide, but he’s unable to catch him due to his unfamiliarity with Rathaway’s new powers and the altered geography of Central City. This is excellent storytelling; using superhero action, “Grodd Friended Me” lets the audience know how adrift Barry is in the merged Earth Oliver created, effectively helpless against a criminal of whom he should be able to make short work. Before the opening titles (which I really like, by the way), the entire thrust of the episode is established, and we understand why Barry is so worried about learning the ins, outs, and what-have-yous of his new world.

Like all science fiction shortcuts, though, it goes horribly wrong, and Barry is knocked out, only to find himself in a cage, being attended to by Caitlin and Harrison Wells. These aren’t their current incarnations, though; they’re from just before Barry met them, when they worked together at STAR Labs (and Harrison Wells was Eobard Thawne in disguise). It doesn’t take long for Barry to deduce that he’s in Gorilla Grodd’s mind, and he’s seeing the world as Grodd once did. Grodd is angry that, after his last defeat, Caitlin used the neural inhibitor to shut down his cerebrum, confining him to his mind. He now has Barry as his prisoner and has used his psychic powers – which he can still use in his mind – to strip Barry of his speed and lock him in a cage, to make him feel what Grodd feels. But he doesn’t want revenge; Grodd wants Barry to help him escape his mental prison, to free him from the neural inhibitor and let him loose again. Barry balks, of course, but Grodd assures him that he’s changed, that he’s no longer the evil mastermind he once was and now wishes only to live in peace.

This is the dilemma at the heart of “Grodd Friended Me.” Has Grodd really changed? And, even if he has, can Barry take the chance that he’s telling the truth and unleash Grodd on the world again? The first is the bigger issue for Barry; at first, he doesn’t believe Grodd for a second, even when Grodd returns his powers and lets him out of the cage in a gesture of good faith. But when Grodd later invokes Crisis, Barry begins to doubt his perceptions. So much has changed, and Barry has been faced with the idea that he has to forget what he knows and embrace the changes that are now his reality. Once he does, the second question is much easier, as it’s the conflict of the greater good vs. the immediate good that has informed much of The Flash. Barry always chooses the immediate good, which, in this case, is letting a good man go free. And as Grodd signaled his trust in Barry by returning his powers, Barry puts his trust in Grodd by merging with him, allowing Grodd control of his speed. Together, they defeat the gatekeeper to Grodd’s prison – Solovar – and escape to the real world.

One of the best aspects of “Grodd Friended Me,” though, is that we don’t know if Barry just grew as a person and helped Grodd find peace, or if he made an enormous mistake and put the world in grave danger. I tend to think it’s the latter. If Grodd is so reformed, why did he not only bring Barry into his mind (which is, in itself, understandable; this is his only chance to escape), but do so knowing that it would cause the mindscape to collapse and kill them both? He says he assumed Barry would be able to beat Solovar on his own, but that seems a big risk to take for someone who has renounced his evil ways. It’s also very convenient that the key to gaining Barry’s trust is to invoke the inner turmoil with which Barry is currently wrestling. If Grodd was able to pull Barry’s mind into his own, it’s conceivable that Grodd was able to read his mind as well, and if he did, he’d know that Crisis is making Barry doubt himself. Grodd wisely doesn’t mention it right away but keeps it in his arsenal until the perfect moment, bringing Barry to his side and securing his release. I could be wrong (imagine Grodd and his gorilla army showing up again to help Barry instead of fight him), but this is my current reading, and if it turns out to be true, Grodd is an even more dangerous villain than we thought. 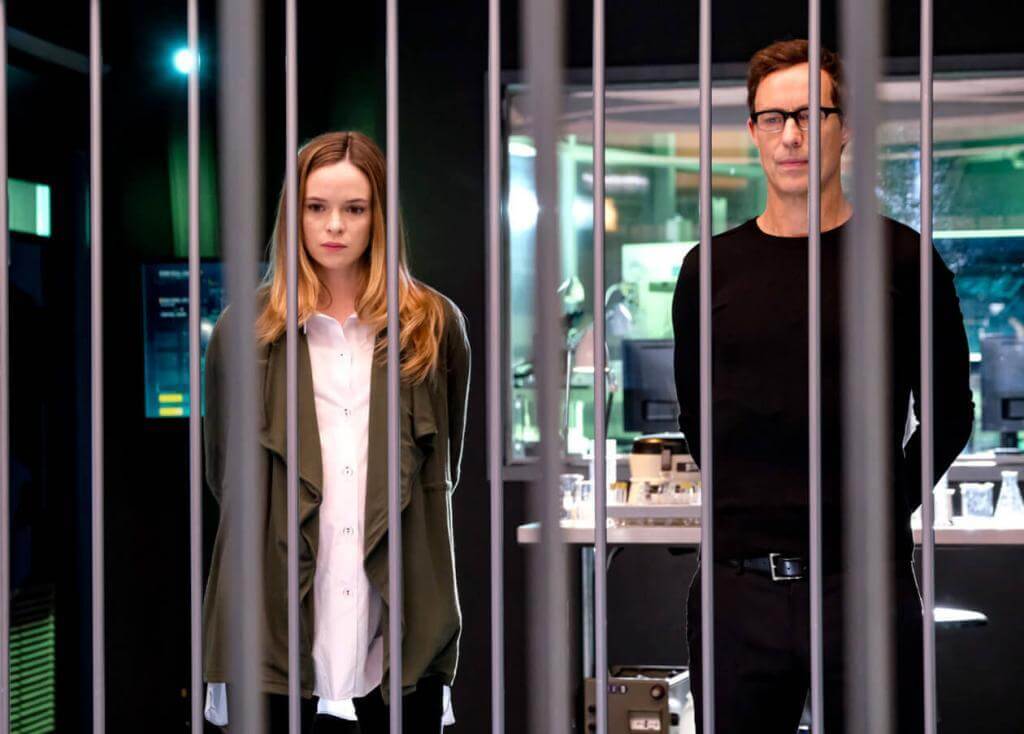 The rest of “Grodd Friended Me” is compelling as well, and all of the subplots revolve around characters doubting themselves. Chester (who I thought I was going to hate after his first couple of appearances but is actually very fun and sympathetic in this one) lets his enthusiasm to join Team Flash get the better of him and ends up opening the door for Grodd’s kidnapping, resulting in the science genius believing he’s more trouble than he’s worth. Once Frost convinces him to make up for his mistake rather than run from it, though, he proves his worth to himself and earns a place helping his hero. Nash’s experiment fails, and even worse, Allegra finds out that he has a picture of himself with her doppelganger, and he doubts his ability to bond with her; a pep talk from Frost (she’s doling out advice like candy this week) gets him to try honesty instead of sneaking around like a creep, and he goes to see Allegra and tell her the truth – although he doesn’t quite make it, because a vision of Sherloque pins him to the wall and stares at him with the glowing red eyes of Reverse-Flash. Does this mean his visions have been Eobard Thawne all along? Iris is gung-ho to leave the mirror universe, but Eva shows her why that can’t happen, turning Iris off her escape plan. But the big twist is that Eva is evil, and she’s in cahoots with Fake Iris! This is getting very interesting, and while the road leading here was a bit rocky, there’s plenty of potential going forward.

Where “Grodd Friended Me” lags a bit is in the special effects. I try to be understanding of what I assume are the limited budgets of CW shows, but I remember Grodd looking a lot better and more realistic than he does here. He was never going to win any awards or anything, but he looked more convincing in his early appearances. Here, he’s more cartoonish and less detailed, as is Solovar. They don’t look terrible, especially for the CW, but they’re less than they once were. The humor, however, is excellent, and used in just the right doses, so it doesn’t undercut the drama. Chester is funny, and his enthusiasm may be used to make up for the more jaded Cisco. One of Nash’s gags falls a bit flat, especially in comparison to the rest of the humor, but it’s a minor blemish. The acting is superb, particularly, once again, from Grant Gustin, whose anguish at the new world is palpable. Having him be unable to find his parents’ graves is perfect, instantly showing how lost he is, how his grasp on everything he knew is so tenuous (which would make him even more vulnerable to Grodd’s manipulation, if that’s what’s happening). It also leads to a wonderful moment between him and Chester and makes their friendship believable. Even Camilla is more interesting than usual. “Grodd Friended Me” is a great one.

“Grodd Friended Me” may be the best episode of the season (yet). It returns to the show’s moral dilemmas, progresses Barry and some of his supporting characters, and offers a couple of neat twists that spell trouble for the heroes in the coming months. Gorilla Grodd’s return doesn’t disappoint.

The Flash – "Grodd Friended Me"

“Grodd Friended Me” may be the best episode of the season (yet). It returns to the show’s moral dilemmas, progresses Barry and some of his supporting characters, and offers a couple of neat twists that spell trouble for the heroes in the coming months. Gorilla Grodd’s return doesn’t disappoint.