"I guess sometimes it pays to be impulsive." 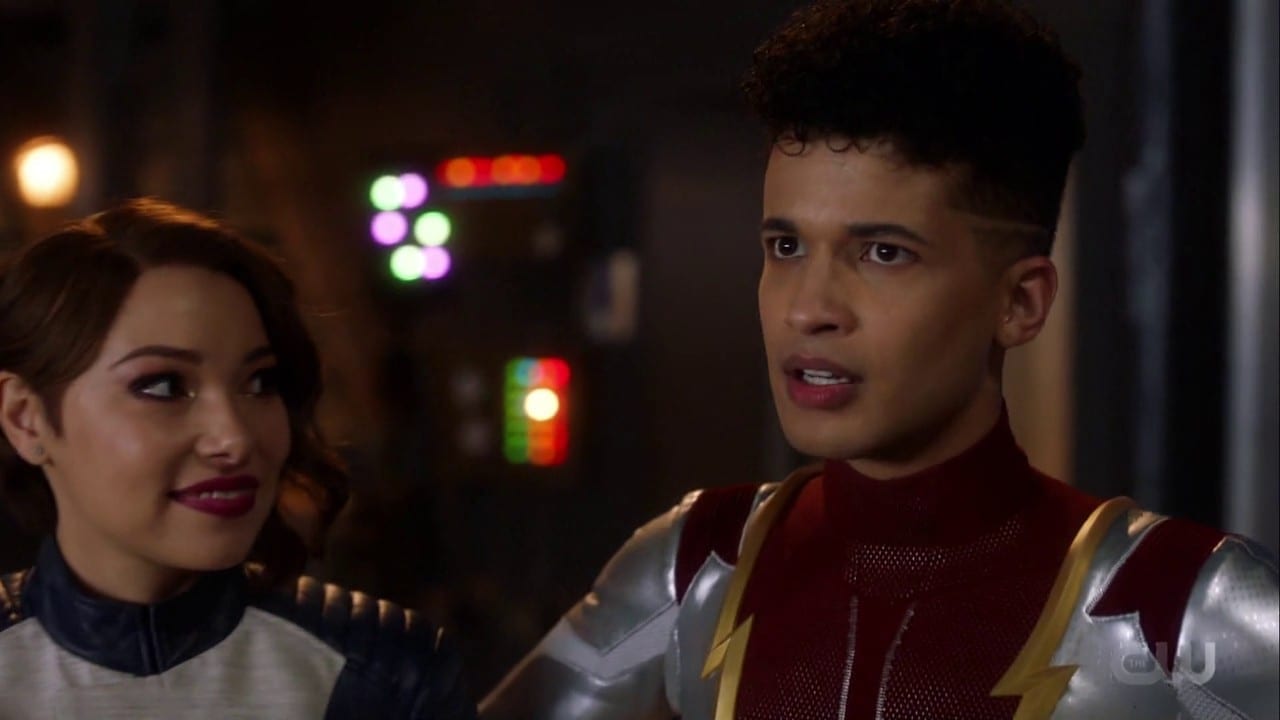 “Heart of the Matter Part 1” isn’t very good; at times, it’s so bad it would be embarrassing if someone walked in on you watching it. But there are a couple of truly great moments, mostly due to the images they create, that have glimmers of the excellent show The Flash once was and almost assuredly will never be again.

Barry teams up with his future children, Nora and Bart – or XS and Impulse, probably because Cisco left before he could name them – to stop the Godspeed war, but Bart’s connection to Godspeed puts the whole team in danger. Chester needs Allegra’s help to figure out a way to defeat Godspeed. Joe and Kristen Kramer do the bare minimum to count as having a subplot. Caitlin is present.

“Heart of the Matter Part 1” begins by showing us how Nora and Bart became involved in the Godspeed war. In the future, the Flash children tangled with Godspeed just before he jumped back in time, then followed him into the past. This scene makes a number of awful decisions and manages to undermine all three characters. First is Godspeed: his voice is like Cobra Commander mixed with Macho Man Randy Savage. How anyone thought this worked is beyond me. Up till now, Godspeed and his clones were intimidating villains who felt like threats to the Flash. After hearing this voice, you half expect Bugs Bunny to lead him into the path of a speeding train or something.

Bart makes it even worse because his goofy voice, movements, and expressions are so bad that they actually complement this radical tonal shift. The Flash was always fun, but it once took itself seriously, especially in the villain department. Now, it’s got a cartoonish bad guy and a new hero that matches him. Nora fares better than either of them, but she and Bart look like the most incompetent superhero team ever conceived when they argue like idiots while Godspeed escapes. Aren’t they supposed to have been active crime fighters for a while before this? Regardless, these three stumble their way into the current year so the episode can begin in earnest.

“Heart of the Matter Part 1” is the product of the biggest problem with the Godspeed War storyline: it’s too rushed. One episode is packed with Bart’s history with Godspeed, Jay Garrick’s involvement, Barry’s family trying to function as such despite their little interaction with each other, and using a currently innocent August Heart to understand what Godspeed wants. These elements happen so quickly that none of them have enough time and development to be meaningful. Oddly, an episode this bursting with information and plot points still feels at least a little bit like filler, with nothing anyone does having much of a lasting effect on the story. Neither the good guys nor Godspeed and his clones achieve anything or seem to progress along their paths.

Take Bart, for example. “Heart of the Matter Part 1” introduces him (aside from his 10-second appearance in last week’s stinger), establishes him as a grinning idiot – sorry, an impulsive young person – reveals his rivalry with Godspeed and his close friendship with Jay Garrick, and both puts him at odds with and brings him back under the wing of his father. That’s a lot of character development for 40 minutes of television, and Bart suffers for it. We don’t feel his connection with Jay because we’ve barely seen Bart by himself, let alone with his closest ally. We’ve also never seen him interact with Barry before, so running the gamut so quickly is like being read a children’s book before bedtime by a sleepy parent.

Moreover, Bart’s relationship with Barry doesn’t seem realistic because of how inauthentic Barry’s reaction to meeting the son he never knew about is. With more episodes to play with, Barry could have been shocked by Bart, slowly acclimated to his son’s presence, and learned how to be a dad to a boy already in an independent stage of his life. There’s no learning curve in “Heart of the Matter Part 1;” Barry slips into dad mode immediately, as does Iris with being a mother. I know they’ve gone through this with Nora (not that the Arrowverse has ever had a problem retreading well-trod ground), but it’s hard to buy into them adapting this fast. However, I did appreciate that there wasn’t some big fight in the wake of the kids showing up; Barry and Iris are united and support each other like two grown adults, and I’m always glad to see that. 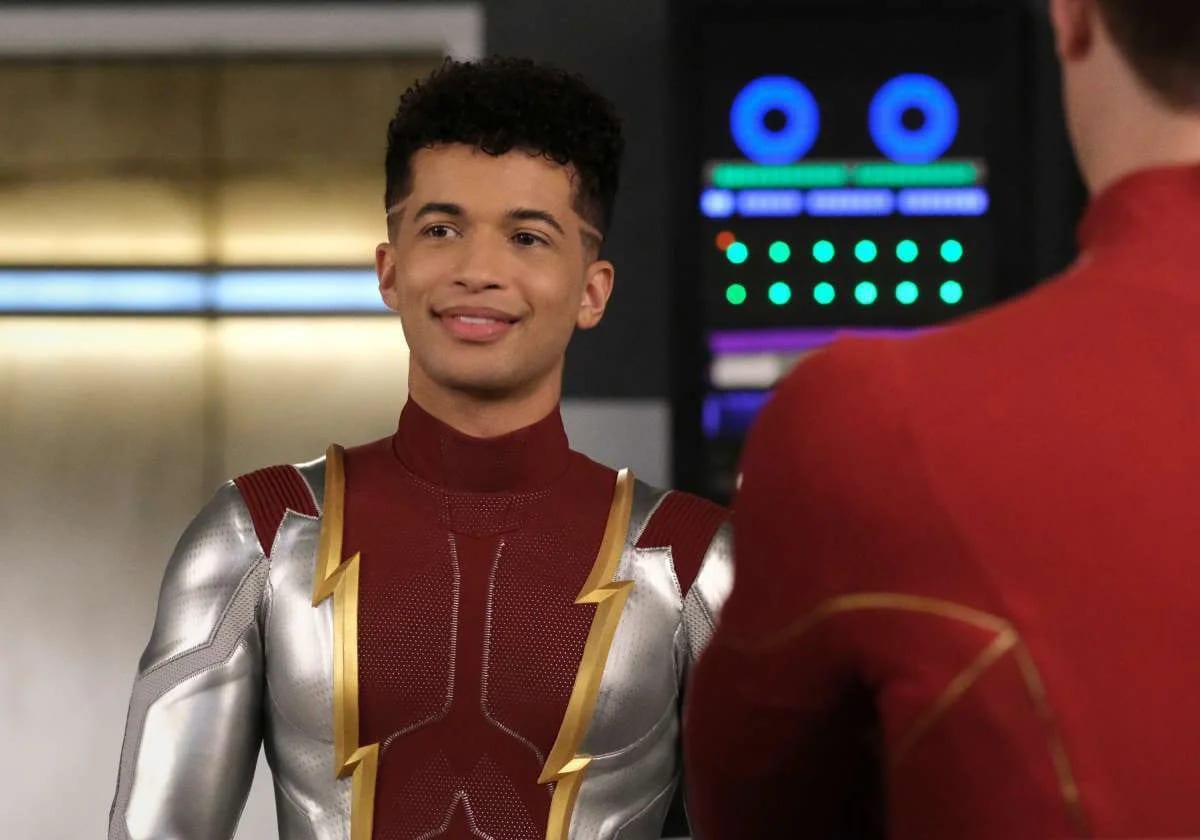 Compressing this story so much also hurts Godspeed. Past villains, even the lame ones, demonstrated how evil they were through their actions, actions we saw and, as a result, felt. We witnessed Reverse-Flash kill Barry’s mother and Zoom kill his father, for instance. But “Heart of the Matter Part 1” simply informs us that Godspeed kills Jay Garrick at some point. Instead of that pathetic opening, why not begin the episode by showing us that? Make us feel Bart’s pain and Godspeed’s ruthlessness, and give us the gut-punch of watching Jay die at this monster’s hands. In fact, have Jay’s murder come after the moment where he tells Bart to take chances – the big piece of advice that bonded the two. That would go a long way towards getting us invested in these characters. Instead, we’re told these things through dialogue spoken by people who have changed the timeline so often that this doesn’t feel like it matters at all.

The same holds for August Heart, the man who will one day become Godspeed. We’ve spent no time with him and haven’t seen him interact with Barry and the others at all. And yet, in “Heart of the Matter Part 1,” we’re expected to be invested in Barry trusting Heart to help them stop Godspeed. This should be a difficult decision, and we’re dutifully informed that it is, but once more, we don’t feel it. This should have all come well after we’ve experienced Godspeed’s evil and Bart’s pain. Make us feel like we’re being asked to trust the guy who murdered a beloved character. Show how difficult it is for Bart to get on board with this; maybe even have “Impulse” recklessly try to sabotage Barry’s attempt to enter Heart’s mind because of his hatred. All of this drama was dispensed with for those boring storylines earlier in the season.

Despite how poorly all of the storytelling and characterizations are handled, “Heart of the Matter Part 1” does have some great moments. The first is when Barry dives into the path of Godspeed’s beams of whatever-they-are to protect Nora. We don’t see as much of Barry being a hero nowadays, but his act of self-sacrifice to save his daughter is a terrific image. Also effective is when the speedsters are gathered in the church as the Godspeed clones surround them. One by one, each avenue of escape is cut off by another squadron of clones till they’re completely boxed in and ready to be annihilated. There’s some genuine suspense in the way this is staged, and the good guys look like they’re in real trouble. And, finally, Cisco’s return is fittingly triumphant, though it happens so soon after his departure that you have to wonder why Carlos Valdes didn’t just stick it out till the season was done. Were those four episodes really a bridge too far? The rest is meaningless. Chester and Allegra have busy work to do, and Joe and Kramer are finally drawn into the Godspeed war. (That these two had no idea the entire city was being attacked by an army of supervillains is one of the dumbest things I’ve seen on this show.) And poor Caitlin has nothing to do except wait for a much less interesting character to acknowledge her existence. What a shame. 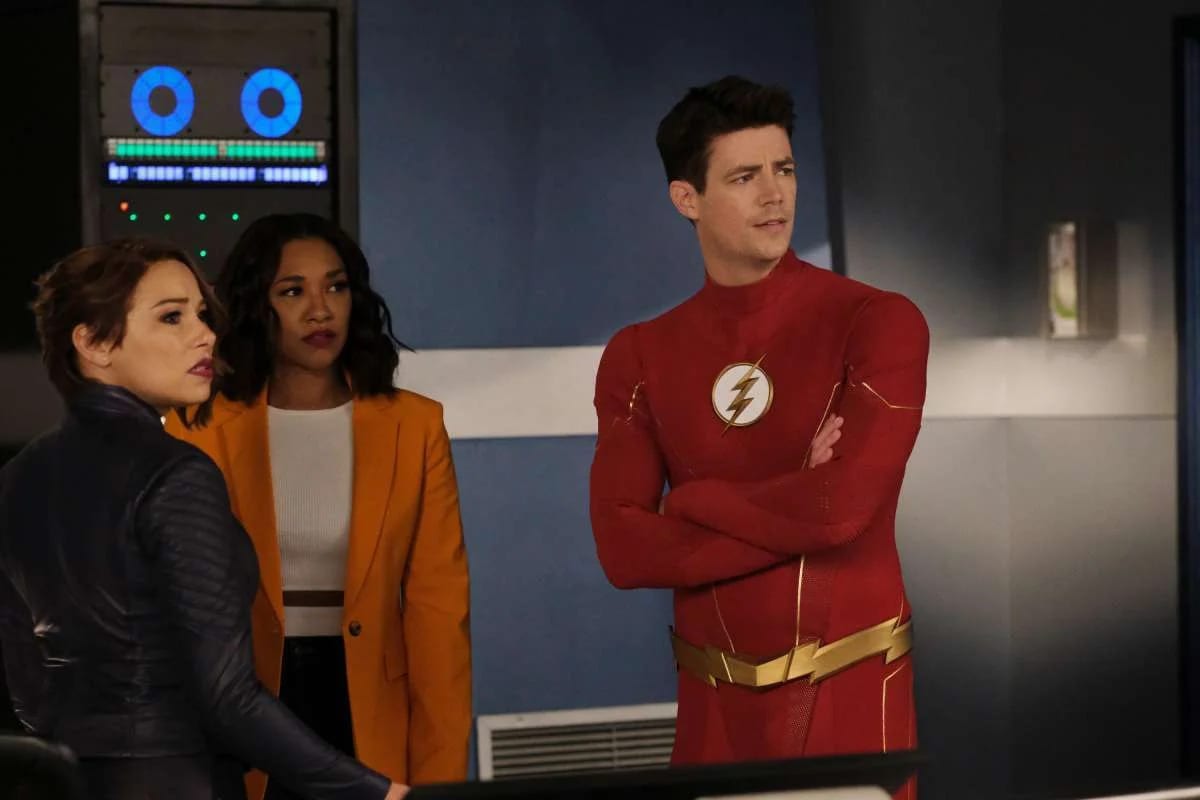 “Heart of the Matter Part 1” is at once overstuffed and inconsequential, rushing some potentially good storylines and character arcs because the Godspeed War arrived so late in the season. It has a couple of show-stopping moments, but the rest of the episode diminishes their impact. Next week’s finale has to be pretty astounding even to attempt to make up for most of this season.

The Flash – "Heart of the Matter Part 1"

“Heart of the Matter Part 1” is at once overstuffed and inconsequential, rushing some potentially good storylines and character arcs because the Godspeed War arrived so late in the season. It has a couple of show-stopping moments, but the rest of the episode diminishes their impact.