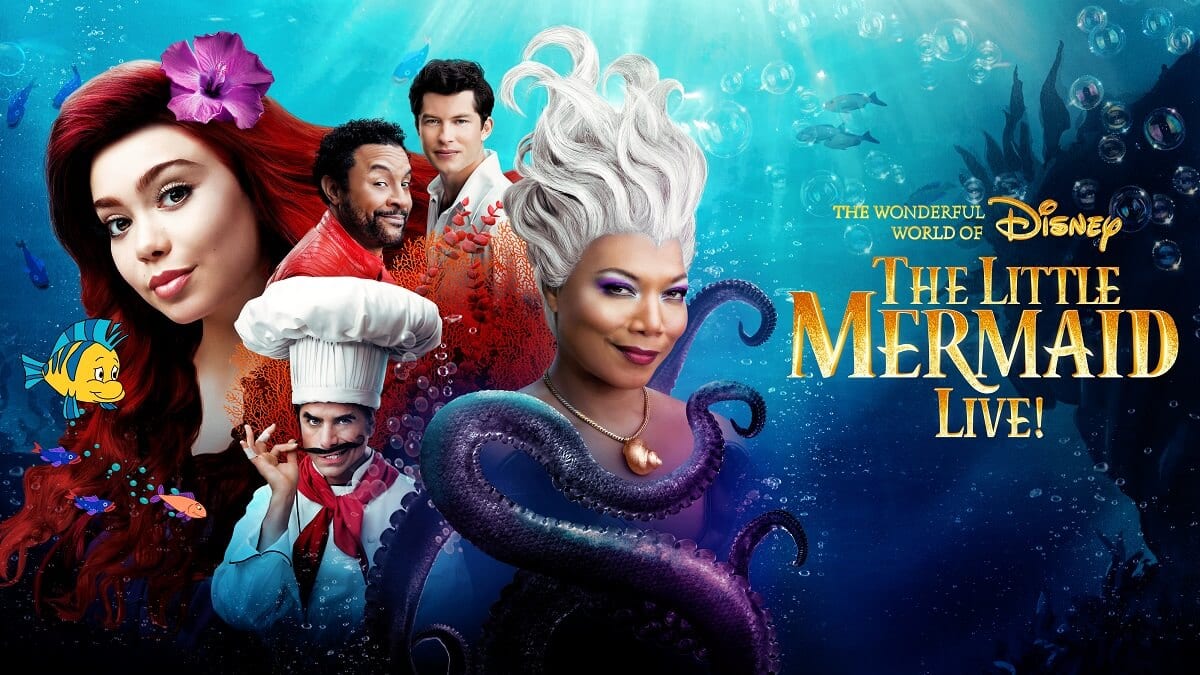 When I heard that Disney was doing a live musical presentation of The Little Mermaid, I was more than a little concerned. This trend of adapting stage and screen classics live has mostly been a mistake, as anyone who watched Peter Pan Live or The Sound of Music Live can attest. Disney is pretty much my favorite thing, so naturally, I wasn’t thrilled at the prospect of their animated classic receiving the treatment. However, my interest was piqued when casting announcements started coming out. Starring Auli’i Cravalho (Moana) as Ariel and Queen Latifah as Ursula, the musical was beginning to sound better than the upcoming live-action remake. Last night, just a week before the animated film’s 30th anniversary, I decided to tune in. Let’s have a look.

The Little Mermaid Live begins with Jodi Benson, Ariel from the animated film, introducing the production and welcoming the audience. This was a nice touch, and I’m delighted that they included the original Ariel in the show. The story from the animated film, unsurprisingly, remains unchanged in the live performance. However, songs are added in, including a reprise of “Poor Unfortunate Souls,” two songs for Eric, and a duet for Eric and Ariel. These are pretty good for the most part, although, except for “Poor Unfortunate Souls,” you’ll probably forget the lyrics and tunes after the show ends. Some of the songs, including the lead couple’s duet “If Only,” come from the Broadway show, which I’ve admittedly never seen. The live performances are interwoven with scenes from the animated movie, an exciting and original idea. The way they do this is pretty clever, too; when Ursula sees Ariel in her crystal ball in the animated film, it’s Auli’i in costume. Later, after her transformation into Vanessa, the Ursula in the mirror is Queen Latifah. The performers do a great job with the classic songs, especially Auli’i, who gave me chills, and Queen Latifah, who’s clearly having the time of her life. Shaggy is quite good as Sebastian, and I actually liked the simplicity of his costume. Graham Philips is amazing as Prince Eric. I’d never heard of him prior, but after seeing the show, I think he would be a great choice to play Eric for the remake. He displays more personality and chemistry with Ariel than Christopher Barnes’ animated Prince, and he’s a terrific singer, also unlike the animated version, who never got to sing. John Stamos’ singing isn’t great in Chef Louis’ comedic romp “Les Poissons,” but it was never a show-stopper anyway. Besides, he is hilarious and embodies the crazed cook perfectly. Again, like the others, he seems to be having a lot of fun, which makes him fun to watch. 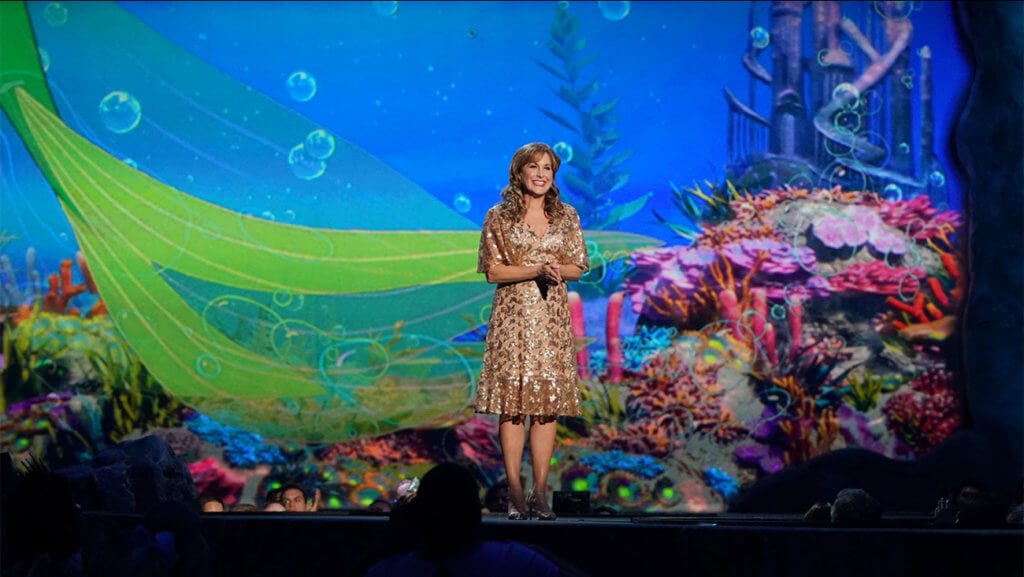 The visual presentation of The Little Mermaid Live is outstanding, and more so for being on stage and done with practical effects. They do a tremendous job making the stage look like a ship during “Fathoms Below.” Likewise, when Ariel and Eric’s boat is flipped in “Kiss the Girl,” streamers shoot up to look like splashing water. The costumes are gorgeous, and I appreciate how film-accurate they are. Ursula’s dress is particularly cool, and early in the show Queen Latifah steps out of it to reveal another layer underneath. I was repeatedly surprised at how much effort and ingenuity was put into this production. It must have been a really cool experience for people there in the crowd. The instrumentation of the music is a little different at times, and I think it works really well. “Fathoms Below” is extended and includes Eric singing, another change that, I believe, comes from the Broadway show. I did find it odd that they didn’t cast an actor for Triton and give him a song. Personally, I always found him to be the most dynamic and interesting character in the animated film. His relationship with his youngest daughter is more complex than people give the film credit for being. Personally, my favorite non-musical moment in the animated movie is when Ariel embraces him and says she loves him at her wedding. I love that they played this scene from the film straight through. It’s strange that, instead of Triton, they cast an actor for Grimsby, and he gets a few lines in “Fathoms Below.” Nothing against Grimsby or the actor portraying him here, but Triton is definitely more important to the story and Ariel than he is. However, there’s so much good in this production that this didn’t bother me too much on the whole. 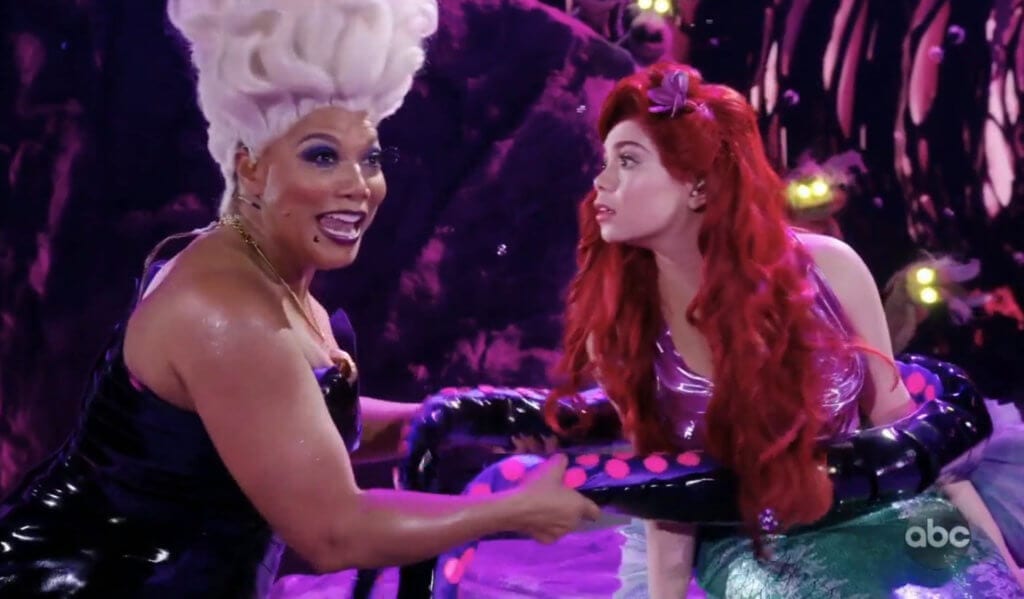 The Little Mermaid Live ends after the movie’s final scene with, essentially, a dance party. All the performers and Jodi Benson come back out on stage, and it’s really just nothing short of joyous. I really love Auli’i’s Ariel wedding dress. It looks wildly different from the one in the film, but it’s gorgeous, and I like how it resembles a clamshell. The inclusion of the film’s wedding sequence also prevents the dance party from feeling like a cheap replacement or filler scene. I was almost afraid they weren’t going to bring Queen Latifah back out, which would be a real shame as she absolutely rocked her part. It’s interesting to me that she got to play Ursula after posing as her in Annie Leibovitz’ Disney Dream photo series. Lots of people have gone so far as to say she stole the show, but for me, it would have to be a tie between her and Auli’i, who’s pretty much an official Disney Princess by now. 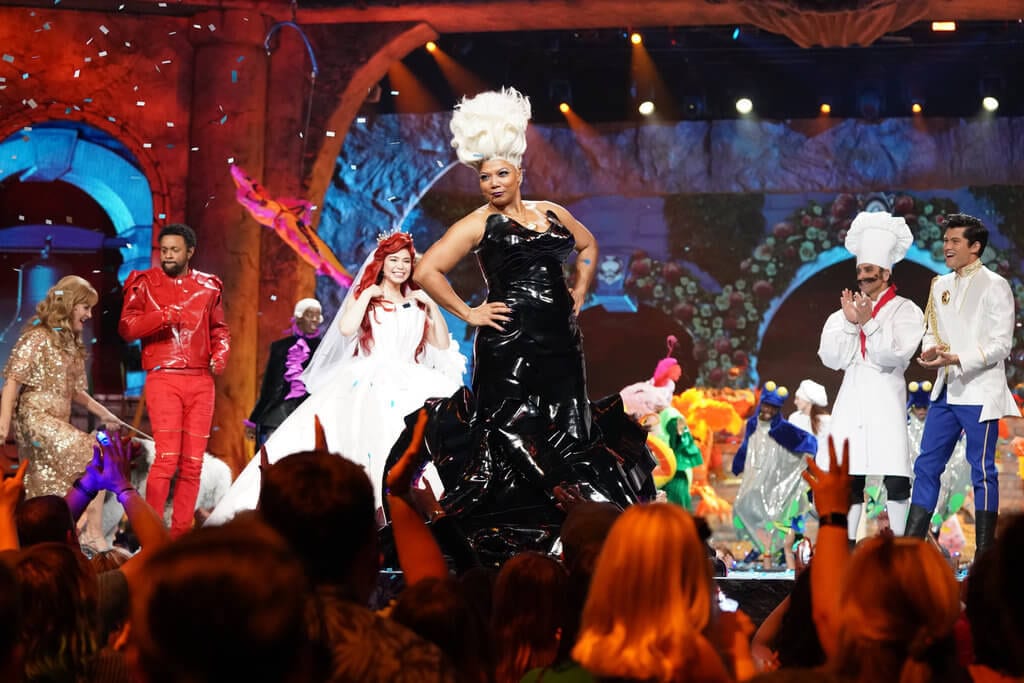 Overall, I’m pleasantly surprised to have enjoyed The Little Mermaid Live so much. These live musicals are usually abysmal, and I wasn’t eager to see Disney classics tarnished in such a way. Sure, they’re already remaking the movies to mixed results, but that’s a different story. Regardless, casting, costuming, musical arrangements, and visual effects are absolutely spectacular here. Almost from the first moment, this live presentation had my attention, and they knew just when to cut back to the classic film in-between performances. The whole thing seems to have been meticulously planned and brilliantly staged. My one nitpick is that I would have loved to see King Triton included, and his role expanded with maybe a solo or two, but what is here is pretty great nonetheless. This performance is a love letter to the original film that also offers some interesting changes, and I would recommend it to any Little Mermaid fan. I know it’s early, and we don’t know much yet, but the live-action remake is going to have a hard time being half this good.

The Little Mermaid Live is gorgeous, campy fun for the whole family. I'd recommend recording it if for nothing else than Queen Latifah and Auli'i Cravalho's performances.