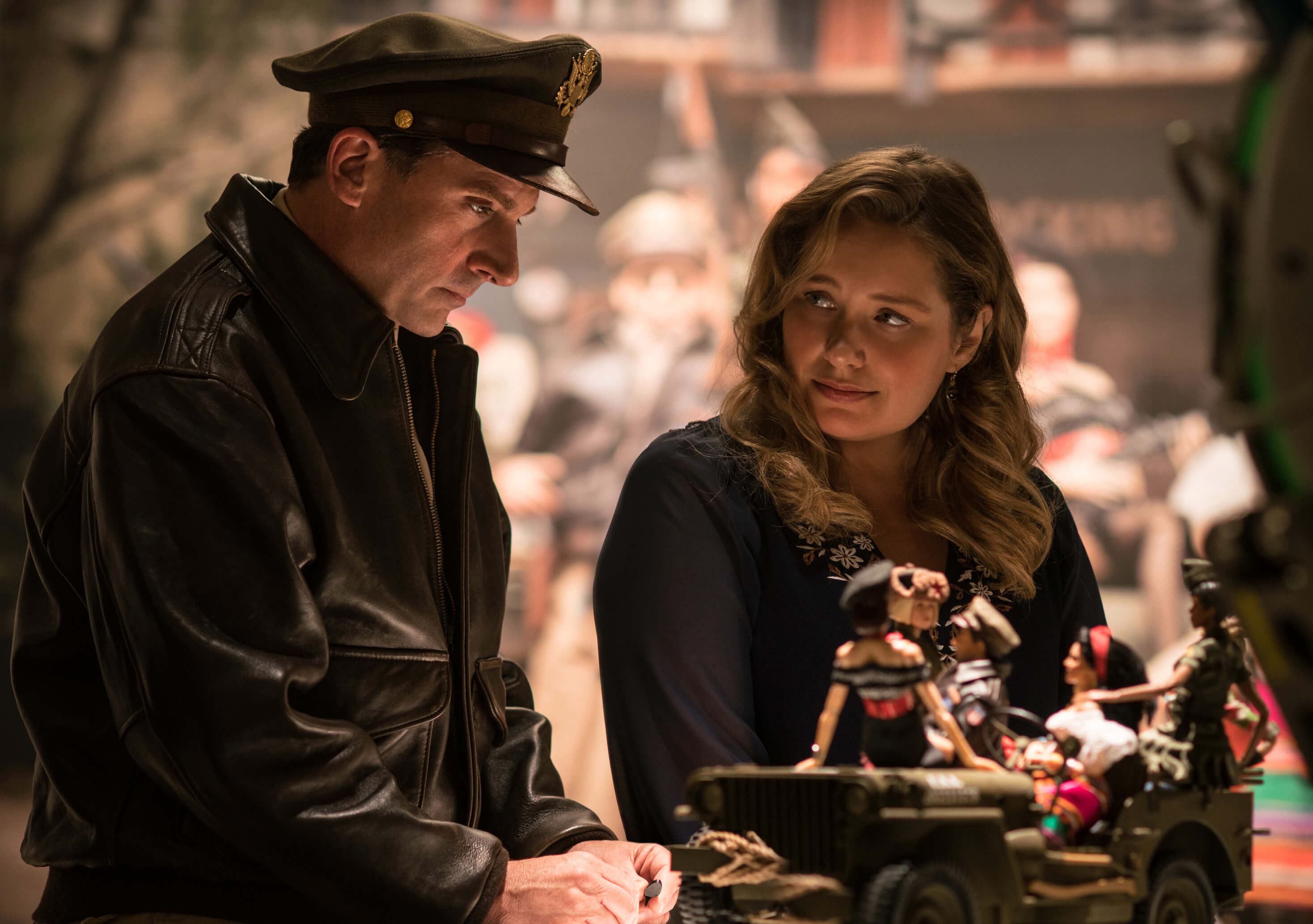 I’m a sucker for films that involve toys. For some reason, I can’t help but watch movies that have anything to do with toys coming to life. Steve Carell playing the lead was another reason for me to check out Welcome to Marwen. I honestly didn’t know much about the plot before I got into the theater, and that was probably for the best. It would be difficult to pitch this movie to me when one of the focal points of the story is the main character’s shoe fetish. I understand that this is based on a true story, so it needed to be addressed. But it happens to produce just as much cringe as it does heartwarming moments.

Welcome to Marwen is the true story of Mark Hogancamp. He’s the victim of an assault that causes him to lose his memory. He knows he was once a great illustrator, but the beating has left him unable even to write his own name. Now he does toy photography and lets those pictures tell the story. He’s created a toy city named Marwen, where the toys go on adventures and kill Nazis. Then a new neighbor moves in across the street who catches Marc’s interest. He now has to conquer his personal demons in order to move on with his life and allow himself to be happy.

I enjoyed what Robert Zemeckis was trying to accomplish with Welcome to Marwen. Marc is an awkward man who hasn’t been able to fully adjust to his new life after the assault. His actual life is dull and repetitive. He works a job that requires minimal skill, and during his free time, he’s constantly working with his toys. Marc understands this, though, which is why he uses his toy world as an escape. Visually, the movie breaks into these outrageous action scenes played out by the toys themselves. Marc is the main toy named Hogie, who fights off Nazis and protects the city of Marwen. The city is also inhabited by a group of women who represent the women in Marc’s life. It becomes clear that Marwen is a visual metaphor for his perception of the people around him, as well as the person he wishes he could be.

Hogie is an action hero who can get out of any situation and save the day. He protects the women of Marwen, even though they can fend for themselves. This falls in line with the way Marc’s real life plays out. He relies heavily on these women in his everyday life, and it’s clear that he admires and cares for them. He adds a new doll to Marwen whenever a new woman comes into his life in any capacity. These women include the person who helped him in physical therapy after the assault, his co-worker who always hears him out about the adventures his dolls have, his caretaker who brings him his medicine, and the woman who works at the hobby shop where he gets his dolls. It’s actually sweet that in this imaginary world he’s protecting the people who have been his support system.

This form of visual storytelling is the film’s greatest strength. There are times in Welcome to Marwen when there isn’t nearly as much subtlety, though. Another character that inhabits Marwen is a witch named Deja. They do a lot to tell the audience what Deja is supposed to represent. By the end of the film, the message they were trying to get across is clear, but they choose to hold our hands and explicitly tell us anyway. This speaks a bigger problem in Welcome to Marwen that leaves a lot to be desired.

I did not like this screenplay at all. The dialogue is flat, and the exposition is messy. There are times when I just wanted characters to stop talking. They either say too much or point out obvious things that the audience has already figured out. Welcome to Marwen also use Marc’s shoe fetish as a plot element, and it doesn’t work. I understand that the film is trying to tell a story about a man attempting to find his individuality after a traumatic event, but having this shoe fetish play a part in almost every revelation just feels forced. This is because Welcome to Marwen does a poor job of creating an emotional connection between Marc and those shoes outside of a single sentence that he repeats throughout the movie. There’s also a romance that develops between Marc and his neighbor Nicol that is extremely creepy.

The acting is also not great. Steve Carell does a good job as Marc, but he’s held down by the horrible script. The women of Marwen are decent at best. I wish there were more of Janelle Monae in Welcome to Marwen because her dynamic with Marc could’ve brought more emotional weight to the film. Leslie Mann’s performance is the one I didn’t like at all. She plays Nicol, and her delivery is awkward every time she’s on screen. There are long pauses between her sentences that make sitting through her scenes a chore. She and Carell have no chemistry, and it adds a terrible romance story.

Welcome to Marwen is a missed opportunity. There are a lot of good ideas that don’t succeed due to sloppy execution. The actual world of Marwen is interesting and full of charm; the visual storytelling that occurs there is great, and the parallels it draws to Marc’s life paint a vivid picture. The script holds this film back by not allowing its ideas to progress naturally. The dialogue steps on the deeper message and muddles it completely. Parts of Marc’s life are portrayed with nuance while others never go beyond surface level. The subpar direction also turns a romance that should’ve made us sympathetic toward Marc come across as a misguided obsession. There are parts of Welcome to Marwen I thoroughly enjoyed, but the missteps made them shortlived. It’s safer to skip this one.

Welcome to Marwen is an odd movie about a man and his dolls. The good ideas are muddled by subpar direction and writing. There is an attempt to delve into heavy themes but the lack of focus left a lot to be desired.