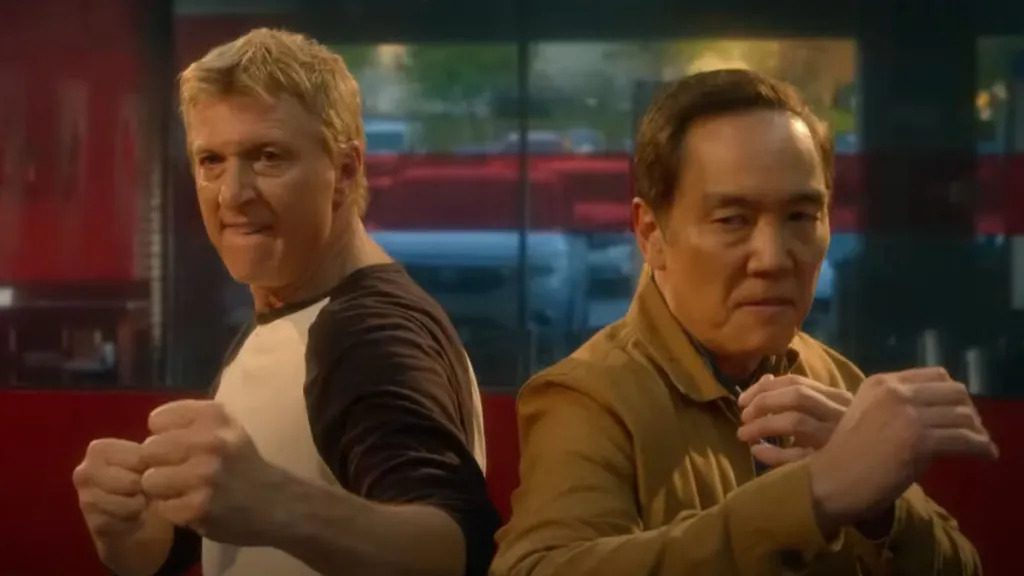 The dojo is open, as Netflix has released what is likely the final trailer for Cobra Kai season 5. The new season, which premieres on Netflix on September 9, 2022, once again stars William Zabka and Ralph Macchio as Johnny Lawrence and Daniel LaRusso, the enemies turned friends turned enemies ad infinitum from The Karate Kid, with Martin Kove and Thomas Ian Griffith returning as evil senseis John Kreese and Terry Silver too. Mary Mouser, Xolo Maridueña, Tanner Buchanan, Courtney Henggeler, Jacob Bertrand, Peyton List, Yuji Okumoto, and many others are also back. Check out the Cobra Kai season 5 trailer below:

I’m always going to be psyched for Cobra Kai (barring a disastrous drop in quality in the future), but the new trailer still managed to get me excited. Daniel and Johnny are on the ropes, with Daniel deciding to close Miyagi-Do, Johnny becoming his own version of an Uber driver, and Terry Silver expanding the Cobra Kai dojo with a new set of sadistic senseis. Meanwhile, the strife among the kids is worse than ever, particularly between Miguel and Robby. And, of course, Amanda manages to bring everyone down with another self-righteous tirade directed at her long-suffering husband; I’m glad it at least looks like Daniel is defending himself, although, of course, she has to get the last word. There’s surprisingly little of Johnny in the trailer, but since almost every line of his is awesome, it doesn’t bother me to wait until the show airs to hear from him. But most of all, it looks like there’ll be lots of karate action, with a Miguel vs. Robby fight especially enticing. Cobra Kai is one of the entertainments I look forward to the most, and I’m as sure as I can be that season 5 will be great.

What did you think of the Cobra Kai season 5 trailer? Are you excited the see the series return? Can we get an 80s revival multiverse so Daniel and Johnny can team up with Maverick and John Rambo (while pretending the awful Last Blood doesn’t exist) to fight commies? Let us know in the comments, and stay tuned to Geeks + Gamers for more on the dueling dojos!

Loved it. Great jokes and memes. The secretly evil philanthropist is a sweet dog whistle. The 1 star rating joke was great. This show is so good. I think the youth in this show are going to go on to big things. Kreese part at the end was a nice touch, that he can still be an intimidating figure.

“Because the car smells like beer? That’s ’cause there is beer, asshole!”

I’m looking forward to seeing what happens with Kreese. It feels like there are several different directions they can take him.

The show has been suffering from bloat of too many characters and as a result feels unfocused. It’s great during its small character moments, the relationships between daniel and johnny or kreese and silver. All the old characters are great. Much of the teen highschool drama stuff falls flat and isn’t in line with the old Karate Kid movies, which were as much about generational issues and being a father figure than about the kid drama. Aside from the first film, it’s barely even Daniel’s story anymore. The other antagonists have no direct issue with him, they are more Miyagi and Daniel is just kind of there as a punching bag.
Tori’s story is good in Cobra Kai, because she lacks that father figure, and Kreese kind of becomes her Miyago, except of course that he fails to teach her calm of mind and insteaf opts for aggression. Johnny and Miguel and Daniel and Robbie were great, because they had that father figure dynamic. But the kid vs kid stories are just one dimensional variations on the bullying theme. Nothing but bloat and filler.

But I’m still looking forward to this, mainly because William Zabka and Thomas Ian Griffith just light up the screen with their performances, and because the show overall has heart.