Over three years after the end of its second installment, American Crime Story is back with its eye on politics. 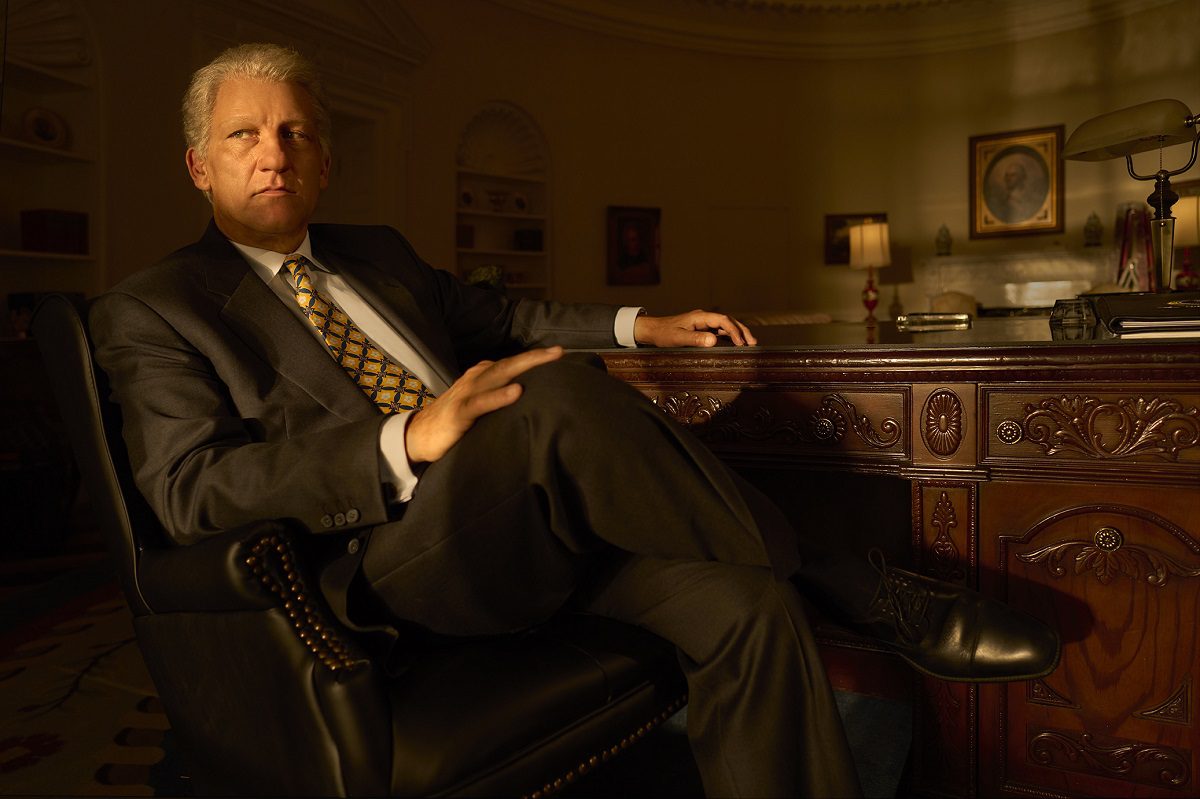 One of the most prestigious dramas on television returns with a different kind of crime narrative. American Crime Story: Impeachment chronicles the historic events surrounding Bill Clinton’s impeachment trial from the perspective of Monica Lewinsky (Beanie Feldstein), Linda Tripp (Sarah Paulson), and Paula Jones (Annaleigh Ashford). With Lewinsky as a consultant, Ryan Murphy and co. seek to delve into the truth of the often oversimplified scandal and the crimes connected to it. Episode 1, titled “Exiles,” follows the three women on a timeline that shifts from one period of time to another. The episode begins with Monica Lewinsky preparing to move when she gets a page from Linda Tripp to meet for lunch. When Monica arrives, however, Linda isn’t alone. 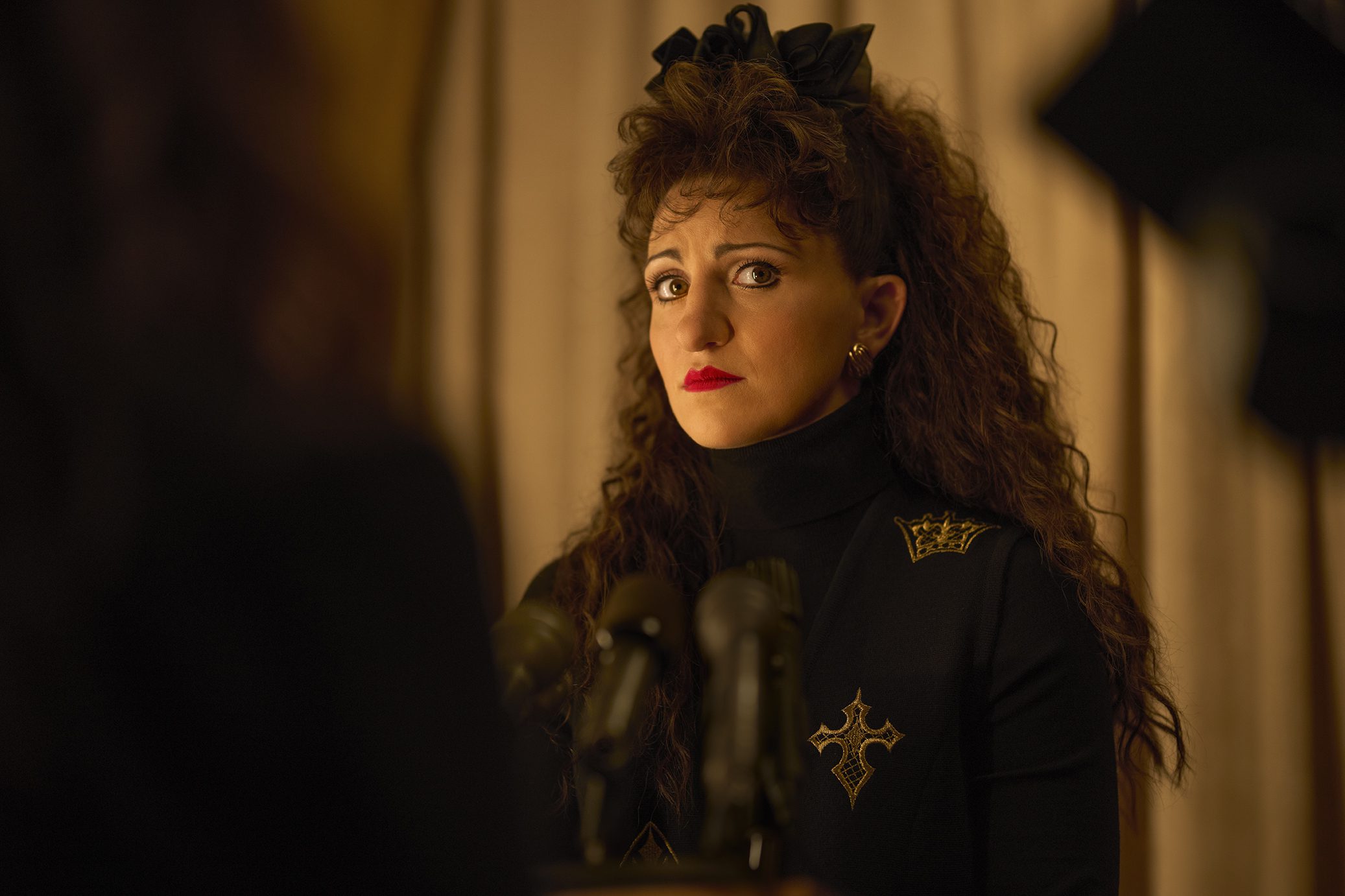 Monica is ambushed by government agents who want to question her. Impeachment flashes back to Linda’s days in the White House, right before her boss Vince Foster killed himself. Once the deed is done, Linda scrambles to keep her position, even privately meeting with the incoming administrators to plead her case. Linda loses her job and gets posted in the Pentagon because her coworkers in the White House wanted her out. Throughout “Exiles,” Linda insists that she was actually relocated because she knows too much about Whitewater despite only ever mentioning it by name. Linda believes President Clinton fears her knowledge despite her replacement’s retort that he doesn’t know who she is. Linda does little to make the most of her new position with the Pentagon, incessantly fussing at her cubicle mate and pestering her boss for a real office. Despite a substantial raise, she only sees the bad in the situation. When Monica, a fellow transplant from the White House, arrives, Linda sees the opportunity she’s been waiting for. The story of Paula Jones’ sexual harassment suit against Bill Clinton is explored in segments interspersed throughout. 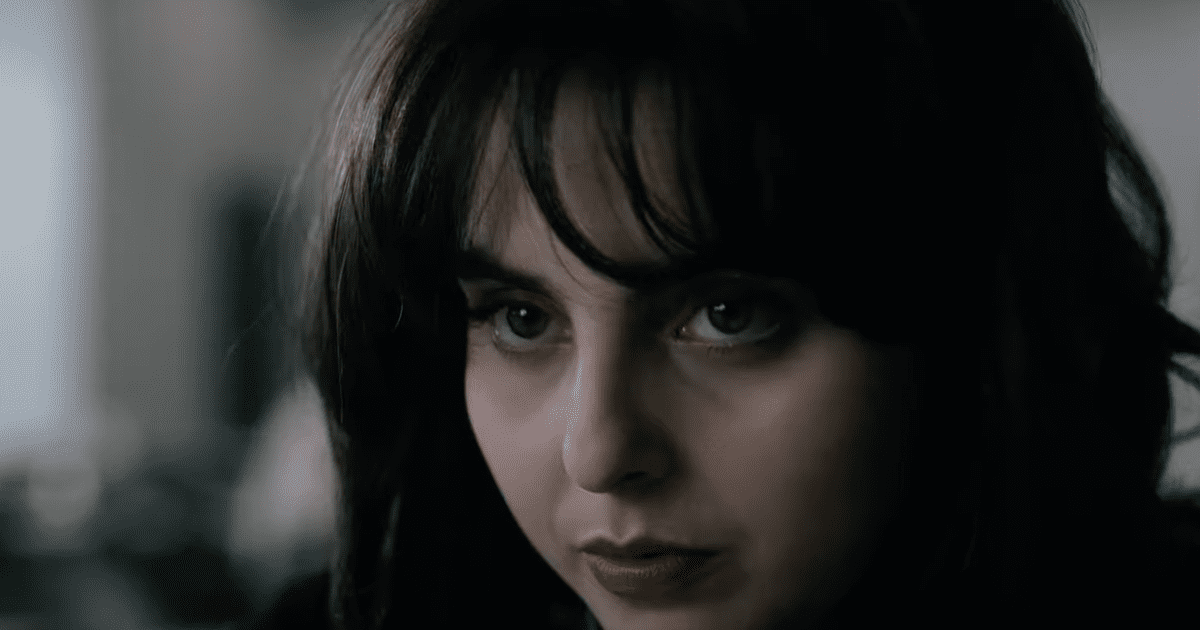 I’m of two minds on this season’s subject matter. I admire the showrunners for going with something so different from the OJ trial and Versace murder. However, while I’m somewhat interested in seeing this show’s take on the sequence of events, I wonder if the Monica Lewinsky affair is compelling enough to support a whole miniseries. They seem to be trying to tie the eventual impeachment back to Vince Foster’s suicide, and at least so far, I don’t see the connection. I also don’t think Beanie Feldstein has the right look for Monica Lewinsky, though she may be able to make up for that with her performance. I’m once again stunned by Sarah Paulson, who never ceases to impress. I thought she was unrecognizable in the latest season of American Horror Story, but I didn’t even suspect she might be playing Linda until a certain dirty look she gave a coworker reminded me of Paulson’s piercing eyes. Seriously, is there anything this woman can’t do, any role she won’t absolutely nail? Paulson is undoubtedly the MVP of “Exiles,” delivering a complex character you could feel sorry for if she wasn’t so unpleasant to everyone all the time. I don’t know anything about Linda Tripp in real life, but Paulson’s creation for Impeachment is a self-important, manipulative malcontent who will do anything to get what she wants. The way Linda views her vulnerable new coworker as no more than a possible asset for her own career speaks volumes. I particularly love one scene in the show’s present time; when Monica is taken to a quiet room for questioning, she tells them to make Linda stay and watch so she can see what she’s done. Paulson’s portrayal of Tripp couldn’t be farther from her mostly sympathetic turn as Marcia Clark in season 1. We all know she’s one of the best actresses working in TV today, but she’s still shocking me with her range and ability to quite literally disappear into the characters she plays. 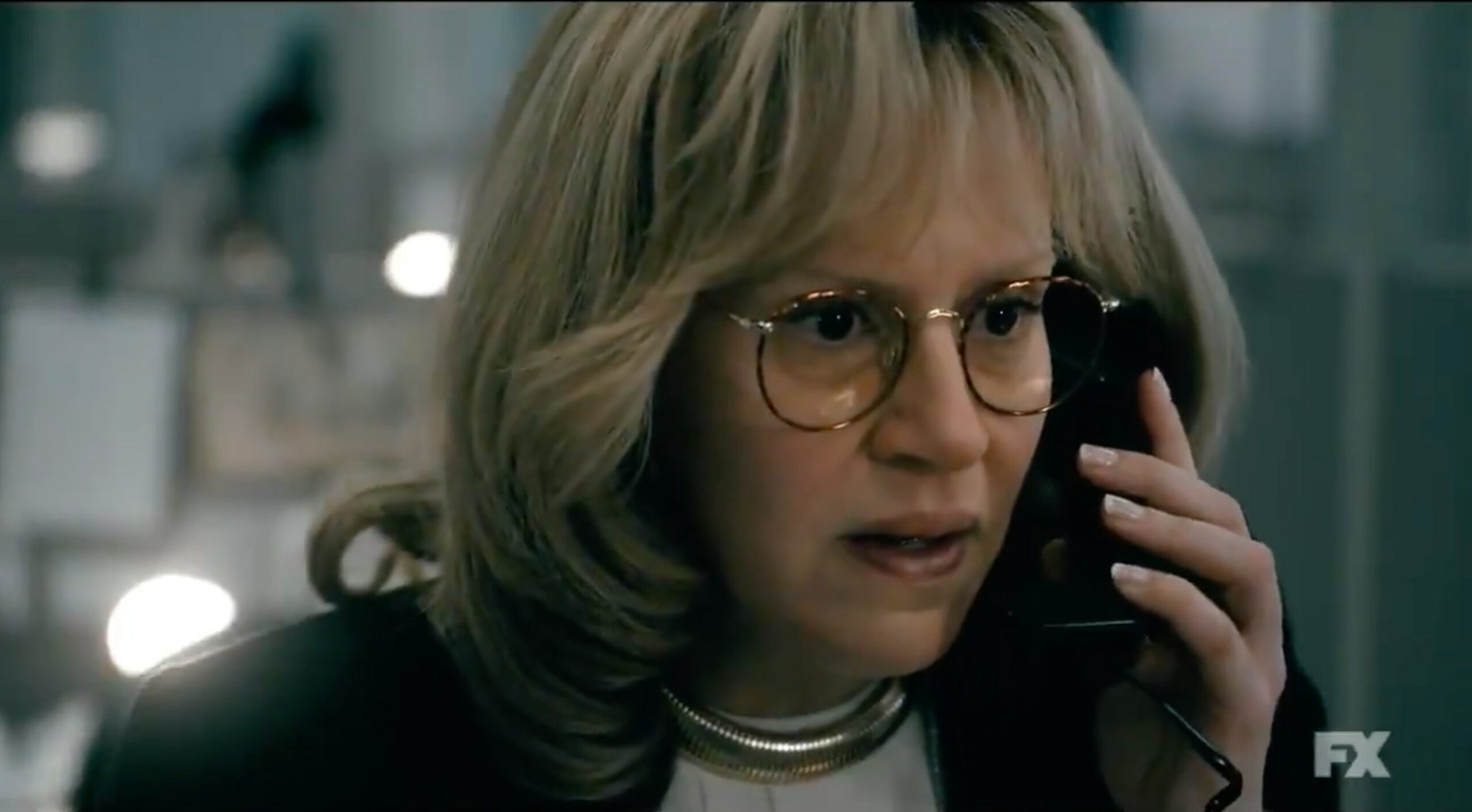 I find the Paula Jones storyline less interesting so far, but much like season 1 did for Marcia Clark, “Exiles” takes a long, hard look at how the media treated Paula. Paula announces her claims of sexual harassment and desire for an apology from the president. But the reporters present only seem interested in hounding the timid woman for all the gritty, pornographic details. It’s understandable to an extent; this is their job. They came to hear something sensational enough to sell newspapers. But even once Paula’s lawyer has outlined what she can’t say at the time, they relentlessly hurl the same questions at her. Paula’s husband seems like a real piece of work, too, less interested in her wellbeing and reputation than his own. You get the sense that he only cares about shielding his own pride from the idea that his wife would be in a room alone with any other man. The one time he tells Paula he loves her, it’s to encourage her to go ahead with the lawsuit so he can get an acting gig on Designing Women. Regardless of how accurate the portrayal may or may not be, this character is just as slimy and despicable as Linda, if not as entertaining. 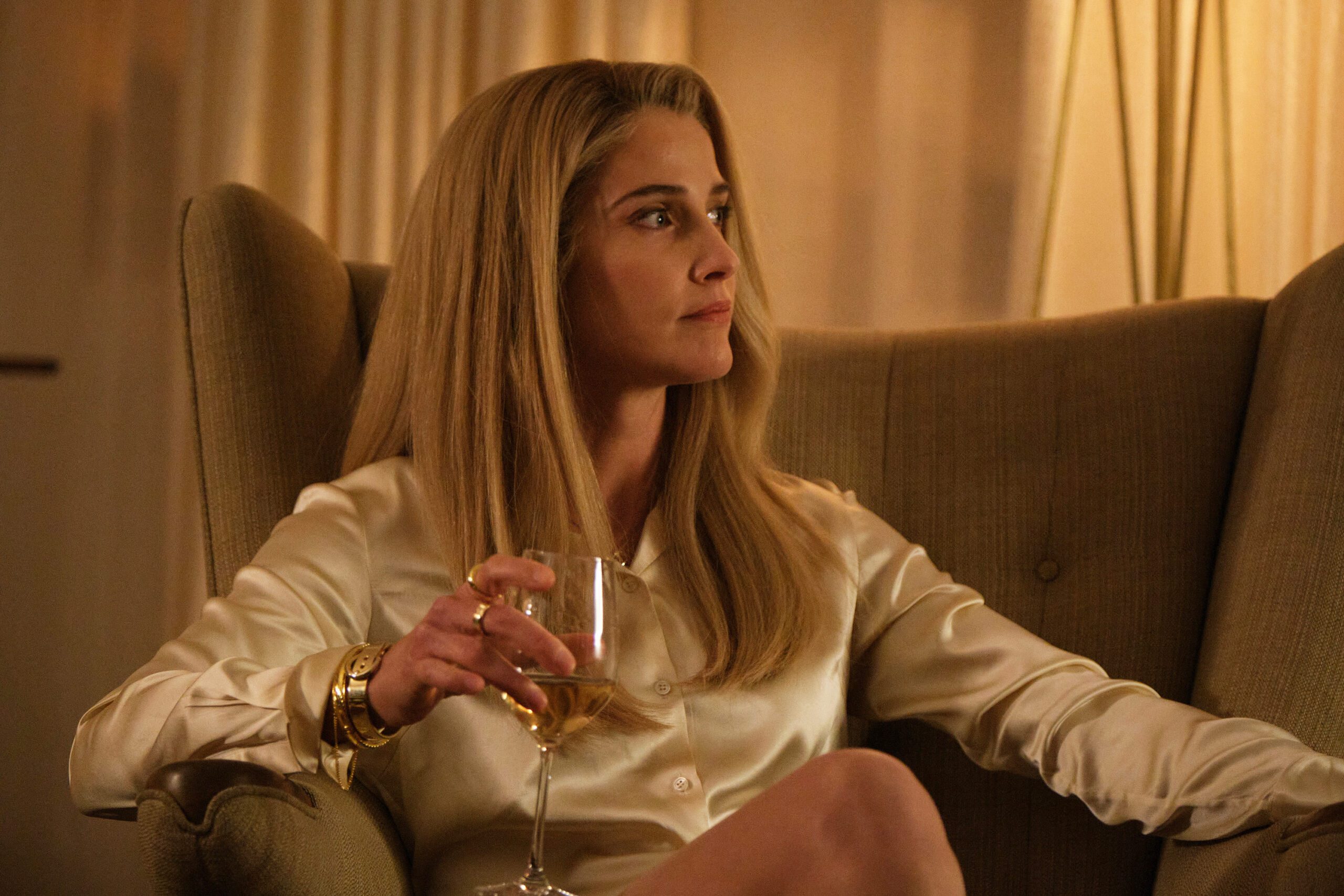 The best parts of “Impeachment,” at least so far, are the performances and the makeup. Annaleigh Ashford disappears under Paula’s large nose, although nothing can compete with Paulson, who seems to have been swallowed up by another person entirely. The show’s music by Mac Quayle adds to the tense atmosphere of “Exiles,” and everything looks great. The shot where Monica is surrounded in the mall is excellent visual storytelling. If they can keep the momentum going for a whole season, I’ll be impressed; I just don’t think this story is as meaty as the others this show has covered.

“Exiles” is a good episode with spectacular acting and costume makeup. With the exceptions of Monica and President Clinton (ironically the two most iconic characters), the actors are spot-on lookalikes, and the wardrobe choices display a fastidious precision to the period. Impeachment has big shoes to fill. I wonder if it can go the distance. It’s going to depend on how the lawsuit storyline shakes out and how far they can take the affair (and its tenuous ties to a suicide from years before.)

"Exiles" is a good episode with spectacular acting and costume makeup.