"One often meets his destiny on the road he takes to avoid it." 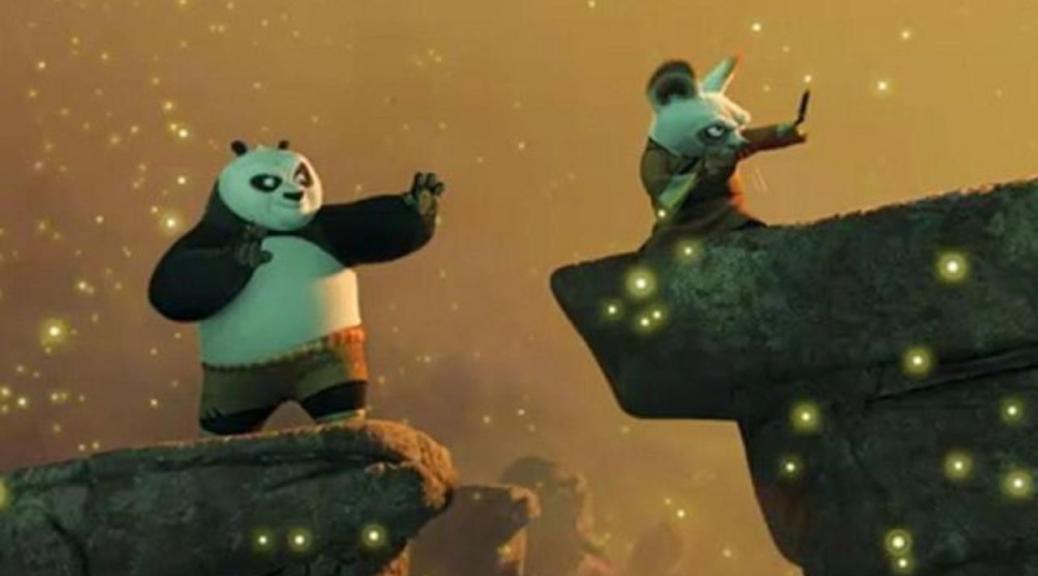 It’s not often that a movie manages to be humorous, heartwarming, and just downright fun all at once. When I first saw Kung Fu Panda, I was absolutely blown away. Nothing in the marketing (including the film’s very title) excited me or hinted at anything better than DreamWorks’ last couple of releases. I’ve mentioned that How to Train Your Dragon and The Prince of Egypt are among my favorite DreamWorks animated films – and my favorite movies in general. I’ve been waiting for an opportunity to talk about my other favorite film from the consistently inconsistent studio, Kung Fu Panda. Let’s dive in.

Kung Fu Panda follows Po (Jack Black), a panda working at his father’s noodle shop and dreaming of practicing Kung Fu with the Furious Five. The Five are a group of elite fighters trained by Master Shifu (Dustin Hoffman), one of whom is destined to become the Dragon Warrior and bring peace to the valley. Master Oogway (Randall Duk Kim) has a vision of Shifu’s former pupil Tai Lung breaking out of prison, prompting the choosing of the Dragon Warrior to take place immediately. Po ends up in the right place at the right time, and his dreams come true. But can a fat, untrained panda stop Tai Lung and save the valley?

This is a pretty standard hero’s journey, and while I appreciate the simplicity of the story, it’s not the movie’s greatest strength. I’m a firm believer that a movie’s quality has nothing to do with the concept of its story and everything to do with how the filmmakers execute their vision. Kung Fu Panda is one of the movies that brought me to this conclusion; as I said earlier, the idea of a martial artist panda didn’t appeal to me. I’ve also seen movies that sounded great but disappointed me (as I’m sure we all have), like Incredibles 2 and Thor: Ragnarok. Kung Fu Panda is actually the main reason I wanted to talk about the Dreamworks movies, specifically why this movie works so well.

I can’t overstate how much the performances make Kung Fu Panda work. Jack Black is funny as Po, but he’s equally as insecure and vulnerable. I love that our introduction to the film’s protagonist comes through his dream of being an awesome warrior who stands alongside his heroes. It’s a highly entertaining scene, and it tells us exactly what Po wants, making his real introduction extremely sad. We now see him as a clumsy, flabby restaurant worker (honestly, #relatable) who can’t even get out of bed on time. I also really like Po’s dad (James Hong) and their relationship. Dad wants Po to become a noodle chef like him and runs with it when Po dishonestly claims he was dreaming about noodles. However, he doesn’t force his life choices onto Po. Once Po confesses what he really wants, his father is unusually understanding and supportive for a single parent in a family movie. It doesn’t usually go too well for the protagonist or the parent in stories like this, and I like that they just made Po’s dad a nice guy who wants his son to be happy. Dad isn’t in the first Kung Fu Panda very much, but he and his relationship with Po are developed further in the sequels.

I would be remiss if I didn’t mention Po’s eventual masters, Shifu and Oogway. This may be a hot take, but Master Oogway is my favorite character in Kung Fu Panda. His dialogue is too good to describe, and I love his personality. He reminds me of Yoda, saying things that initially seem silly or nonsensical but end up providing immeasurable wisdom. Randall Duk Kim’s delivery is spot-on as well. At times, he reads his lines in a way that suggests Oogway is almost absent-minded, like when he just agrees with Po that he’s a loser and nobody likes him. But these exchanges lead to some of my favorite moments in the film. Oogway’s passing is my favorite sequence for the dynamite visuals, brilliant dialogue, and swelling musical score.  Shifu was Oogway’s apprentice and now the master of Po and the Furious Five, but he’s not ready for this task at the beginning of the film. Dustin Hoffman is great in general, and he doesn’t disappoint here as Po’s reluctant tutor. Shifu has at least as much doubt in Po as the latter has in himself, leading to conflict and Po’s initial failures. Before he dies, Master Oogway compares Po to a peach seed to illustrate to Shifu that he must have faith and encourage Po. Of course, Shifu completely misunderstands this advice and tries to re-assert his control over the situation by whipping Po into shape. Only when he witnesses first-hand how effective Po can be in his own, unique way does Shifu truly start to get it. Even still, Shifu doesn’t comprehend how much Po is capable of because he still thinks of the training in terms of reshaping Po into the Dragon Warrior. What Shifu can’t understand until it’s almost too late is that Po doesn’t need to become the Dragon Warrior; he already is exactly what the Dragon Warrior needs to be. Po’s metamorphosis isn’t a physical one, but one of finding self-confidence and awareness.

Ian McShane voices Tai Lung, and he really brings the goods. I never hear much about Tai Lung or this performance, and I think it’s because he got overshadowed by Gary Oldman’s villain in the 2nd movie and J. K. Simmons’ in the 3rd. I can understand this, but it’s frustrating. Tai Lung isn’t the most interesting or sympathetic villain, but the vocal performance is outstanding, and he’s extraordinarily threatening and badass looking. It’s also important to note that Tai Lung’s significance lies in his relationship to Shifu as much as in the damage he can do. Tai Lung is the only pupil Shifu ever really loved, seeing him as a son. He told Tai Lung that he was destined for greatness and deserved the Dragon Scroll, which belongs to the future Dragon Warrior. When Master Oogway saw the dark future ahead of Tai Lung, he wasn’t chosen to be the Warrior, sending him on the warpath. What I love about this backstory and relationship is that it’s told visually through a bold, unforgettable flashback. The editing and timing in this film take common ideas and create a truly unique experience. The Furious Five aren’t that interesting in the first movie, and they just represent another challenge for Po. They’re jealous and bitter of his status as Oogway’s chosen Warrior, especially Tigress (Angelina Jolie). This being said, their vocal performances are very good, and they serve their purpose. You can tell they put the emphasis on Po, the masters, and Tai Lung, and in my opinion, that was absolutely the right call. These creative choices result in greater emotional impact than diving too deep into Tigress’ emotions would have. As is, I think the flashback to Shifu scolding a young Tigress despite a wonderful display of her talents serves the story well. Sometimes, less is more. 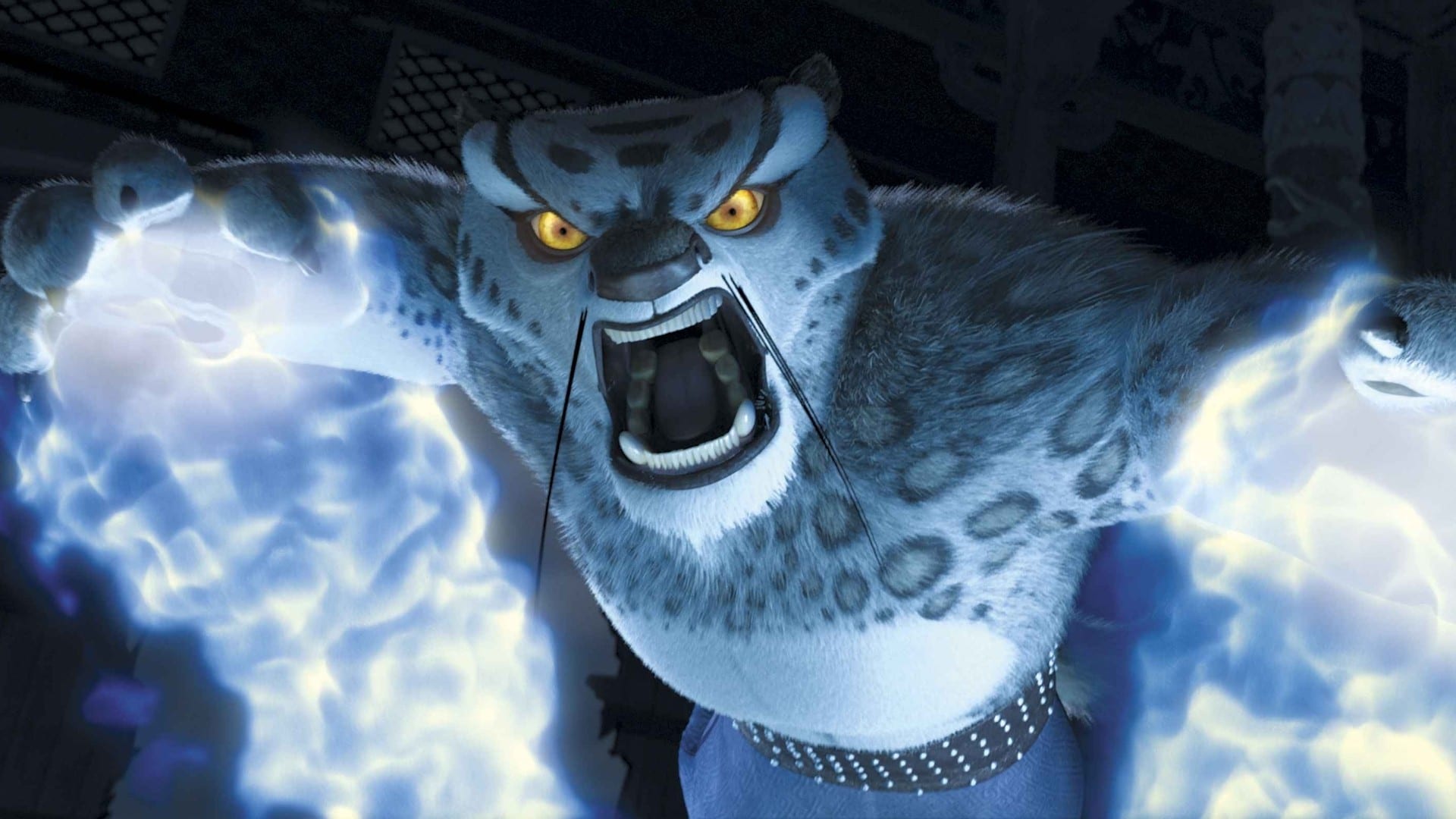 As for the visuals and music in Kung Fu Panda, where do I start? John Powell and Hans Zimmer composed the original score for Kung Fu Panda, and if that’s not a winning team, I just don’t know what is. The musical themes in this movie are absolutely gorgeous. The score is epic when it needs to be and introspective when it serves the story. I can hear the piece from the beginning, as well as the tune that plays when Oogway dies, in my head whenever I think about this film. That’s because those two scenes are diametrically opposed in tone and narrative purpose, but they both say something about why this is a great movie. This movie excels at balancing action, comedy, and quiet, thoughtful moments so well it boggles the mind. The visuals in Kung Fu Panda are wonderful as well. Personally, I like the flat-rendered opening best of all. This is truly a unique, striking scene that grabs your attention right away. The more conventional CG designs are great, too, though, and the characters of Kung Fu Panda are wildly expressive. I consider this DreamWorks’ best-looking CG film up to its release (and it still looks pretty damn good now). I think they did themselves a favor in leaving humans out this time because the fur design and movement are something special. And honestly, DreamWorks’ CGI human characters looked pretty unsettling until 2010-ish. The action and fight choreography are truly something to behold. Whenever I see really good action in an animated movie, I tend to think about either The Incredibles or Kung Fu Panda. The movements of the characters are fluid and blink-and-you’ll-miss-it fast. Similar to what I said about Blood of Zeus, this movie is a big shot of adrenaline.

Much like the story itself, Kung Fu Panda’s messages are simple and well-worn. The movie weaves its messaging into the story and dialogue so well that I wasn’t sure what they were getting at until almost the end of my first watch. Po being enough in and of himself begins to make sense as you see more of what he can accomplish when properly motivated. And this movie isn’t anti-training and preparation; quite the opposite. Po is earnest and a hard worker despite what people see on the outside. He’s willing to do whatever Master Shifu instructs if the latter can only be patient and understanding. Po must become the best version of himself rather than trying to be like the other warriors. The film frequently refers to the secret ingredient in Po’s dad’s soup, only for him to tell Po there is no secret ingredient. This makes for a humorous moment as Po and the audience think he’s going to tell Po he’s adopted. But it also ties into the movie’s themes and Po’s character journey. Kung Fu Panda has relatively simple dialogue, but the way it all comes together is just brilliant in the end.

I absolutely adore Kung Fu Panda. This series got a lot of praise after the second movie’s release, but I never hear about it anymore, and I think that’s a real shame. I’ll get into what I thought of the sequels later, but the original Kung Fu Panda is one of my favorite movies and one that always lifts my spirits. We can’t all be the Dragon Warrior, but what Po learned rings true; there is no secret ingredient. No matter how hard it seems, you just have to strive to be the best version of yourself. I would recommend this movie to anybody because, if you’re willing to look beyond the surface, there’s something here for everyone – although, honestly, even the surface is gorgeous and amazingly inventive.

Kung Fu Panda is one of my favorite movies and one that always lifts my spirits. We can’t all be the Dragon Warrior, but what Po learned rings true; there is no secret ingredient. No matter how hard it seems, you just have to strive to be the best version of yourself. I would recommend this movie to anybody because, if you’re willing to look beyond the surface, there’s something here for everyone – although, honestly, even the surface is gorgeous and amazingly inventive.