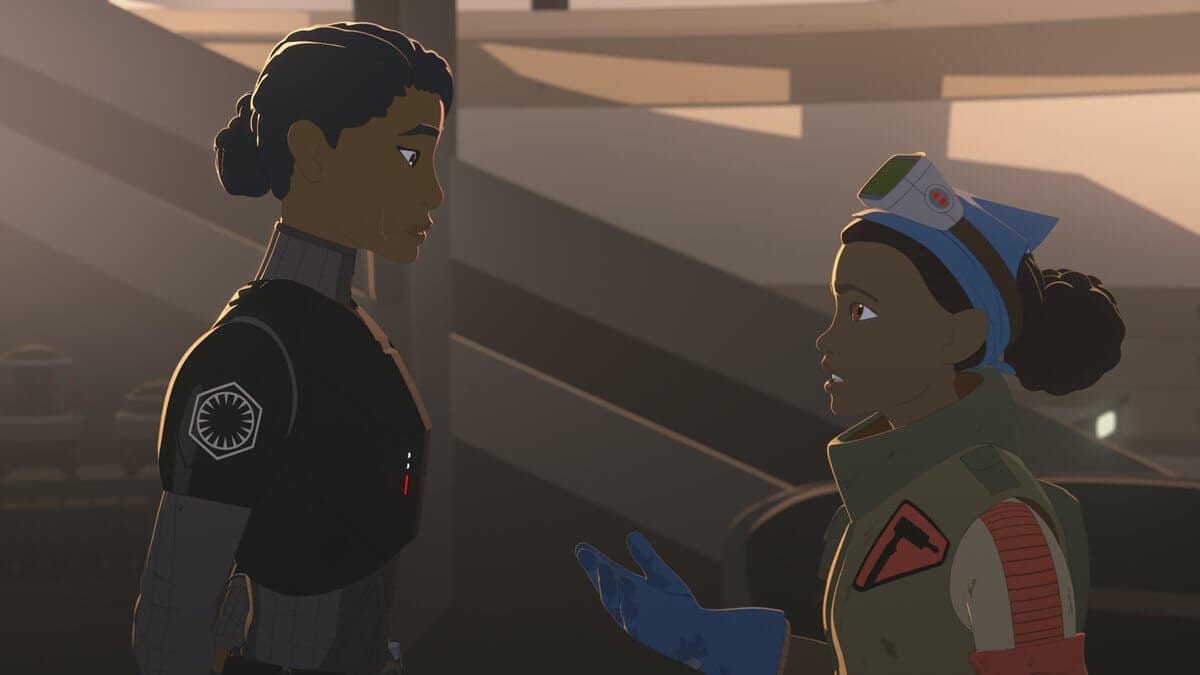 In “Descent,” stormtroopers are about to arrest Yeager and crew, and he demands that they provide evidence of the charges. They say they have visual confirmation that the Fireball was the ship that was poking around an unauthorized sector. Tam says it must be a mistake, to Kaz’s response that it’s complicated. Yeager, Neeku, and Kaz get in the office and lock it, but Tam won’t come; she sits there, frozen, saying it has to be a misunderstanding. Bucket is destroyed in the commotion. Yeager, Kaz, and Neeku take a tunnel through the garage to escape. Meanwhile, Torra tells Captain Doza that they should confront the First Order openly rather than pretending to be compliant. He says he’s doing what he can, and they would have to contact the New Republic. Their chat is cut short when Commander Pyre comes in, informing him of the arrest and pursuit. He also tells Captain Doza that he’s expecting an interrogator, Agent Tierney, who will find out what Tam knows one way or another.

The stormtroopers see Yeager and crew and chase them, but Kel, Eila, and the engineers below the platform help them escape. Agent Tierney orders the troops to remove Tam’s handcuffs, apologizes for their brutality, and begins questioning Tam about the Resistance. Yeager is reunited with Bucket and rescued by fishermen below the platform. In order to gain access to and disable the station’s communications, Kaz and Yeager submerge the Colossus in the ocean, with Doza sealing all doors in and out of the station. Kaz disables the First Order communications and sends a message to the Resistance. Just as their response comes through, the stormtroopers break through to where the men are working. Yeager pushes Kaz and CB-23 into the water so they can escape and allows himself to be captured. Kaz’s SOS is intercepted by Synara and her fellow pirates. Once Kaz gets back to Neeku, Kel, and Eila, he listens to the message from the Resistance. Leia says that she feels for their situation, but the Resistance is already spread too thin and she has no one to send. Kaz tells the others that they’re the Resistance now and that they will save their friends and escape.

“Descent” is a tense, well-constructed episode of Resistance. It took way too long to get here, but this show continues to build intrigue and excitement, and this might be my favorite episode yet. I think Agent Tierney could end up being a great adversary, and she has that subtlety that characters like Commander Pyre and Captain Phasma lack. I love that she’s not at all what Tam was expecting, and this can only be adding to her confused feelings about the First Order and the Resistance. For that matter, finding out that Kaz and Yeager have been lying to her must come as quite a blow too. How can she ever trust Kaz after he’s lied to her about everything from his profession to his background? As I mentioned last week with “The Disappeared,” I think there are a few different things they could ultimately do with Tam. It would be really unsettling and interesting if she decides to join the First Order after what Tierney told her about Kaz and what she’s seen. The troopers attacked the shop in an attempt to arrest Tam’s friends, but from her point of view, she may believe that they instigated it, or even maybe that they deserved it for being spies. It’s a bit early since she was just introduced, but I hope we learn more about Agent Tierney over time. Being that she’s the cool, calculating kind of villain I’ve been wanting to see, I’m hoping they’ll give her a backstory and a reason why she does what she does.

One thing that struck me as odd about “Descent” was how when the guys are in the tunnel trying to escape, they keep stopping to talk. Kaz is practically yelling, and it just figures that they get caught because they won’t shut up. I genuinely laughed when Eila said they were being really noisy, and that she could hear everything from below the platform. There’s even a point where Yeager turns around and says, “Less talk, more walk.” Once again, Yeager proves to be one of the best characters on the show. They’ve established Kaz as a rash, childish person, but I think it’s time he should start coming into his own and growing up a little bit. The point of introducing a character like this, especially as the story’s protagonist, is usually to show development over time into a mature, admirable hero. Personally, I’m just about tired of loud, annoying Kaz. That being said, his last scene in “Descent” is great. The disheartened look on his face when CB-23 plays Leia’s message tells you everything; the Resistance has let him and everyone on the platform down, regardless of whose fault it is or if anything could have been done differently. Rather than lose hope, he becomes the leader of this small group, and unlike Yeager earlier in the episode, prioritizes the rescue of their captured friends. I can’t believe I’m saying this about this show, but the end of “Descent” might make you want to stand up and cheer. 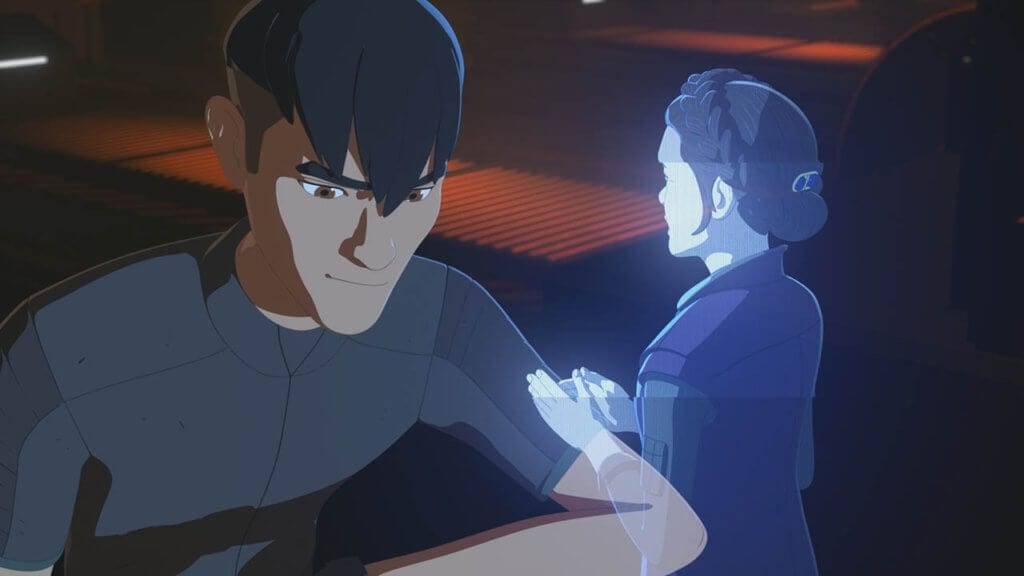 “Descent” is a cliffhanger that leaves a lot of unanswered questions for future episodes to tie up. For example, they show us one brief scene of Synara onboard the pirate ship; her crew has intercepted Kaz’s call for help, and the camera focuses on her reaction as the message plays. The pirates already have no love for the First Order after the events of “The Doza Dilemma,” and they may see some way to profit from helping the people at the Colossus. Or it might even be that Synara will somehow convince the captain to turn back towards the station. Regardless, from this small scene, I’m pretty sure Kaz is going to get some unexpected help, and this is probably how Synara intends to pay him back for helping her escape.

Overall, “Descent” is a pretty good episode of Resistance, and that makes it their best yet. The one nitpick I have is Kaz’s evident lack of urgency when it comes to escaping from the shop, but the show’s characters call him on it not once but twice. The fight scenes are all exciting, and it really feels like something important is at stake. Agent Tierney is already a welcome addition to the First Order, and I hope she proves to be complex and intimidating. There are a couple of genuinely funny lines in “Descent,” and the characters’ relationships continue to gain complexity. Kaz’s line to Tam about taking the Fireball to off-limits sector, “It’s complicated,” could apply to a lot of things in “Descent.” This is definitely my favorite episode so far, and if they continue in this direction, Resistance could become a force to be reckoned with. It feels weird enjoying this show, and even weirder complimenting it, but it certainly feels like progress is being made in every area other than the animation style. And even then, you have to give the animators credit for what they can do with a single facial expression on Kaz when he receives Leia’s message.

“Descent” is a pretty good episode of Resistance, and that makes it their best yet. The fight scenes are all exciting, and it really feels like something important is at stake. Agent Tierney is already a welcome addition to the First Order, and I hope she proves to be complex and intimidating. There are a couple of genuinely funny lines in “Descent,” and the characters’ relationships continue to gain complexity.