With the release of “Gone With a Trace,” Disney+’s supposedly final season of The Clone Wars re-introduces Ahsoka Tano at last. The episode picks up right after the events of the season 5 finale, wherein Ahsoka decided to find her own path rather than re-joining the Jedi order. We find Anakin Skywalker’s former Padawan in the lower levels of Coruscant riding a faulty bike. She crashes onto a platform that happens to belong to Trace Martez, a mechanic who offers to fix the bike for a price. However, Ahsoka’s circumstances have naturally left her a little short on credits. At first she tries to repair the vehicle herself, but Trace takes pity on her and finally offers to fix it on the house. The two discuss Ahsoka’s former home, the role of the Jedi in the war, and how Trace feels they’ve forgotten about the regular people below. She tells Ahsoka that she and her sister Raffa have plans for a better life just as a debtor, Pintu, comes in. His men beat Trace for Raffa not paying her debt, but Ahsoka deals with them before the fight escalates. Trace excitedly asks where Ahsoka learned to fight like she does, and she brushes it off, saying her “older brother” taught her.

The two find Raffa in her shop, a laundromat on the surface, but really much more. Trace tells Raffa about her run-in with Pintu, and Raffa apologizes, explaining that their next job will pay him off. A Twi-Lek comes in with droids that require assembly, a task that Raffa delegates to Trace and a reluctant Ahsoka. Ahsoka explains to Trace that this class of droid was designed for demolition. One of the droids attacks before Trace can put its restraining bolt on; it quickly escapes and runs down the platform. Trace and Ahsoka pass by an enraged Raffa as they pursue the rogue Droid. They trap it, but it starts climbing away anyway. Trace clings to it and manages to disable the bot, but she falls as a result. Ahsoka tries to pull Trace up the traditional way but is ultimately forced (pun intended) to use her Jedi abilities to save her friend. The two beg Raffa not to give the destructive droids back and endanger everyone, but she won’t hear it. It’s “not (her) problem,” and she insists that Ahsoka has no say in it, being new to the lower levels. The two friends leave Raffa to conduct business and grab food. Ahsoka asks Trace if she ever gets to help Raffa make decisions and what cost said choices incur. They’re cut off as Raffa arrives, informing Trace that she returned the droids as initially planned but charged double. Raffa tells her sister that she paid Pintu and gives her some of the credits to buy tools. On this note, Ahsoka reiterates to Trace that she needs to repair her speeder bike ASAP, and the two head back to the shop.

Kevin Kiner’s original score for “Gone With a Trace” is phenomenal. It soars, races, and slows right along with the story and characters. The moment when Ahsoka looks up at the starships as the music swells is particularly breathtaking. “Gone With a Trace” is also a gorgeous episode to look at. The movement of characters is fluid and natural, and this Coruscant underworld looks appropriately gritty and unclean. The character animation in this episode, particularly on Ahsoka’s expressions and reactions, is sublime. I admit I’m not crazy about the character designs of Raffa and Trace. I especially don’t like their hair and how they look all edgy and “badass” (in quotes because I believe this is the intention, but I don’t buy it). I would find it more tolerable if only one of the sisters was like this and the other looked somewhat normal, or at least different. It seems weird to have two sisters who both have androgynous haircuts, ugly clothing, and bad attitudes. My guess is that this is a result of the two replacing the character of Nyx Okami from the story’s original draft. He didn’t have a weird haircut like these from the images I’ve seen, but maybe he had horrible fashion sense and a crappy disposition. I admit that Trace is less mysterious than Raffa, and certainly nicer and more helpful to Ahsoka. I wonder if Raffa will become more of a villain as this story arc goes on, and Trace will be forced to choose to stick by her or help Ahsoka. Either way, I really hope the two sisters grow on me with time. Right now, I don’t find their character designs or personalities at all charming.

However, Ahsoka is the star here, and I do enjoy her overall story. She’s out of her element and trying to hide who she really is, or at least used to be. And that’s hard when you’re trying to protect someone. I liked Ahsoka’s line about being trained in combat by an “older brother.” Of course, on its face, this is a lie. But it seems believable enough for Trace because, on an emotional level, it was true. Anakin and the other Jedi were Ahsoka’s family for years, leaving her lost and vulnerable after her trial. Based on the flashback from season 5, episode 6, “The Gathering,” Ahsoka was very small when Master Plo Koon found her. As such, the Jedi and their teachings may well be all Ahsoka remembers from her childhood. While, as a viewer, I didn’t care much for Trace, this goes a long way in explaining the shine Ahsoka takes to her. Obviously, she appreciates the help with her bike, and this is the first kindness she’s been offered since she left the Jedi order. It feels like she’s doing most of the heavy lifting here, both physically and otherwise. While the Martez sisters undoubtedly lead a difficult life, it’s strange to me that Ahsoka has to point out how unethical some of their jobs are. Raffa simply doesn’t care what results of the droids being unleashed because, for her, it’s all about herself and Trace. Even Trace, the younger and more sympathetic of the two, can brush her misgivings aside for a few credits. 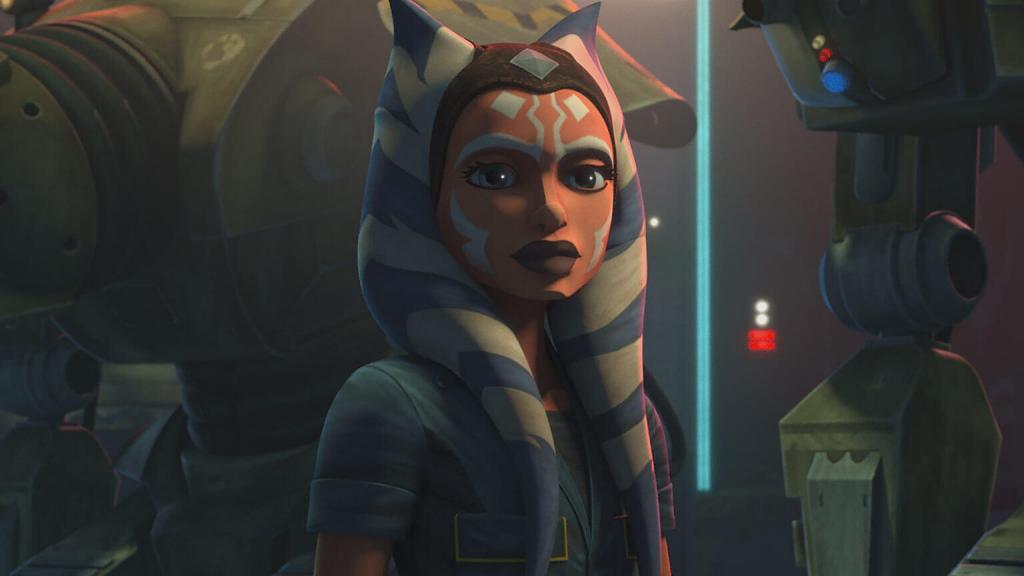 Raffa is awfully calm upon learning that her baby sister was beaten over a debt she incurred and didn’t pay. I think they may reveal that it’s really all about her, not even her sister, her only family. Raffa needs Trace for her mechanical expertise, but one could question how much she loves her or even cares what happens to her. I also wonder if they’re setting Ahsoka and Trace up merely as friends or whether something else is in the works between the two. I don’t really care myself, but if romance is in the cards, I dread the ensuing backlash we’ll all be forced to listen to until the end of time. It wouldn’t add much to the overall story anyway, as we know Ahsoka is on her own by the time Rebels is set. Either Trace would have to die, or it would have to be a one-sided crush. I’m not sure I see the point of introducing a new character in the final season just to kill them. Likewise, Ahsoka has already experienced romantic rejection with Lux Bonteri, the son of a murdered Separatist Senator and the only individual she’s expressed such feelings for. Whichever way they take this plot thread, I’m interested in Ahsoka’s adventures, I just don’t want another blow-up in a fandom newly reunited by The Mandalorian. 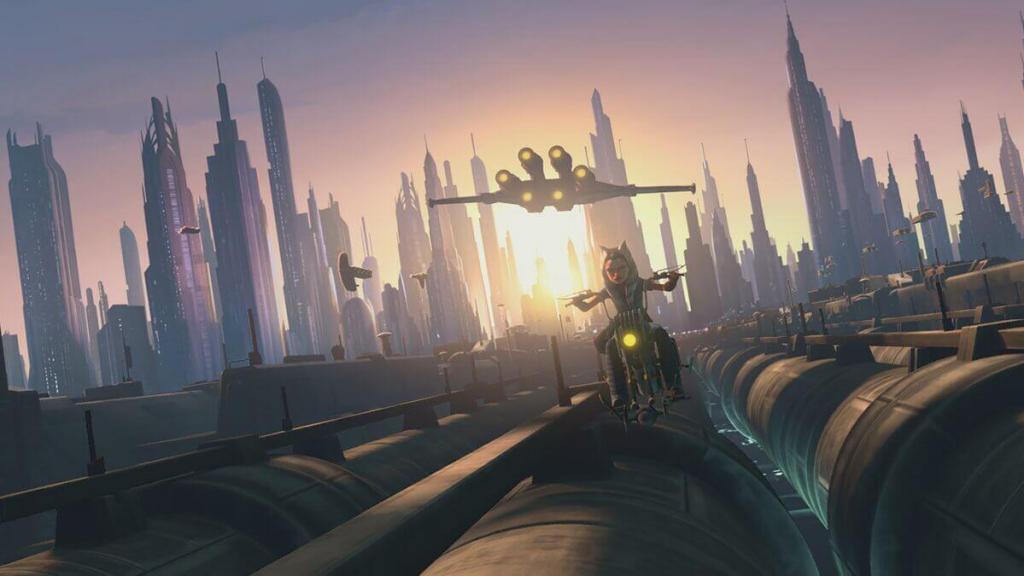 I watched “Gone With a Trace” twice, once with my husband just for enjoyment, and again to make sure I didn’t leave anything out for the purposes of this review. At first, I didn’t really care much about it either way, which quite surprised me. As much as I liked the “Bad Batch” arc that ended last week, I was practically counting seconds until we got an Ahsoka-centric episode. My second viewing proved more interesting as more details stuck out to me. The music, animation, and Ashley Eckstein’s performance as Ahsoka are brilliant, as always. The Martez sisters leave something to be desired, but they are surrounded by exciting ideas, and we have about three more episodes to see them develop. Overall, I enjoyed this episode, and I look forward to what’s to come.

The Clone Wars – "Gone With a Trace"

"Gone With a Trace" introduces two characters I could do without, but they serve their function and highlight the real star of the show.