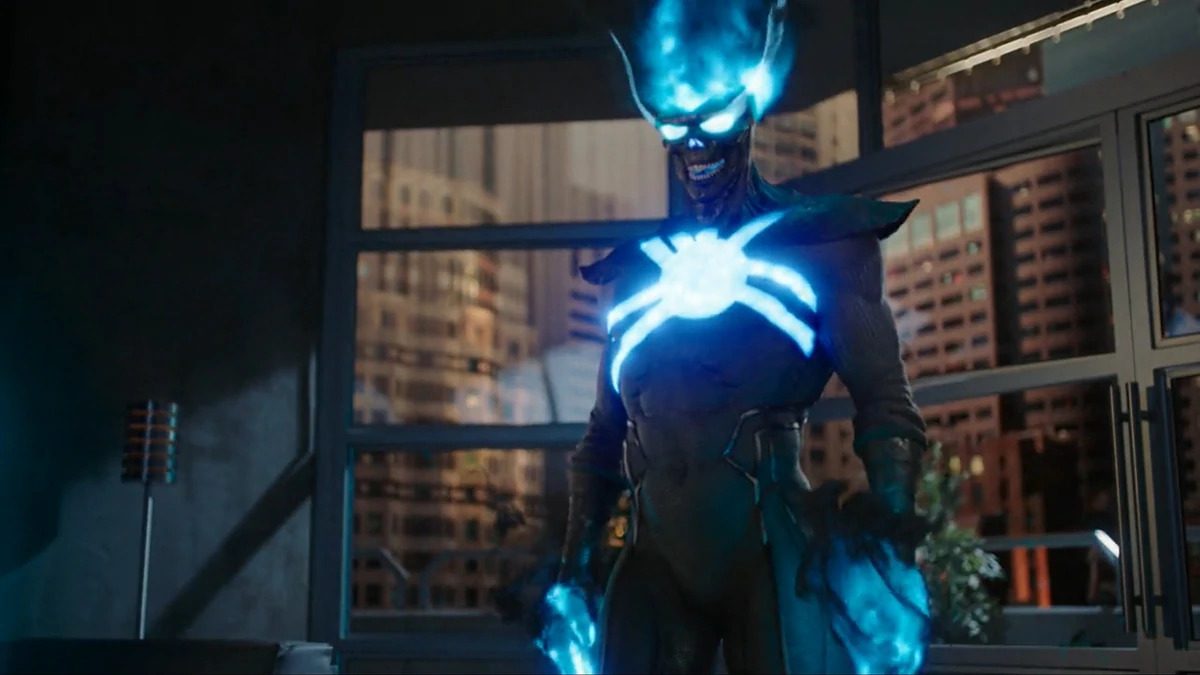 “Death Rises” is what I call a connective tissue episode, made necessary by 20-plus-episode seasons (see also: the filler episode and the bottle episode) and existing mostly to move the plot along between high points. These are never anyone’s favorite episodes, and “Death Rises” doesn’t have the thrills of a “Phantoms” or “Resurrection.” But it’s better than these often are because the writers were smart enough to do some important character work and add a fun showstopper of a scene where the Flash finds a creative new use for his powers.

Finally given physical form, Deathstorm wreaks havoc through Central City, making Caitlin his main target and leaving Barry scrambling to keep up with him and figure out where he came from and what he wants. Iris learns a little bit about her condition as she grows more unstable. Kramer enlists Joe and Barry’s help to keep people as safe from Deathstorm as possible.

“Death Rises” begins with a scene that functions mostly to establish Deathstorm as a threat unlike any Barry has yet faced. The imagery is doing the heavy lifting here, with shots of planets and solar flares and elements splashing against the cold canvas of space, giving Deathstorm a cosmic feel, like he’s some primordial being from before the stars were born come to Earth to wipe away the ant-like humans crawling along its surface. With The Flash now in its eighth season, Barry has conquered so many powerful villains that they begin to feel like lesser challenges each time. (Sure, he’s defeated faster speedsters, a blood monster, and a psychic gorilla, but what can the Flash do in the face of A LADY WHO LIKES MIRRORS AND STUFF!?) Going all-in on the new bad guy is necessary to keep people engaged, to feel like Barry is truly outmatched, and they’re pulling it off with Deathstorm. Even the look of this guy is incredibly effective – much more than you’d expect from a CW show. (And The Flash has a spotty history with this; remember when we were supposed to think those goofy-looking forces were a serious threat?) Before fleeing to kill some more people, Deathstorm pontificates about the order of the universe being sullied by the chaos of human existence, and he wants to get rid of that blemish for good.

The setup is also fascinating because it’s complete bunk. By the end of “Death Rises,” we learn a lot about Deathstorm, and while he is a big threat with interdimensional origins and reach, he’s hardly some ancient power. In fact, he’s relatively young; he was created when Ronnie died in the Singularity, a product of Ronnie’s grief at knowing he’d never see Caitlin again mixed with the sci-fi wackiness of the Singularity itself. As a result, Deathstorm is powered by grief but trapped in the Singularity, only able to hop between dimensions connected to it. And he’s found his way back here for a reason: he’s been searching for Caitlin, pushed by the sorrow that created him to reunite with their source. And as he feeds on the grief of others, he’s using that to transform Caitlin into a being like himself, to create a “bride” that can be by his side for eternity. I hope they reconcile Deathstorm’s opening monologue with his ultimate goal because the idea of a creature who hates the messiness of humanity but desires the most elemental part of that humanity – love – is intriguing, and would set him apart even more from his villainous brethren.

It also creates a great contrast with his nemesis. As Deathstorm is trying to make himself whole, Barry is discovering that he’s finally become a surefooted, confident, responsible leader. The mayhem Deathstorm creates as he seeks power and companionship is offset by the calm Barry radiates. In prior seasons, he’d be shouting, crying, and losing his mind over an enemy this powerful and unpredictable. Now, Barry is measured in his response, analyzing the danger without emotion but keeping those emotions at hand to motivate him. He may be coolly looking for answers about Deathstorm, but he’s adamant about keeping his friends safe. When Iris needs his help, he goes to her, but he also doesn’t need to be reminded to return to Central City, understanding how to balance his focus between the wife who needs his support and the city that needs his super speed. And when Cecile and, later, Frost resolve to risk their lives to help stop Deathstorm, Barry proves that he’s learned the lesson from “Reckless” and, while he makes sure they both understand the dangers, allows them to make their own decisions and supports them. He’s a fully-formed leader now, and just in time for a bad guy as powerful as Deathstorm. 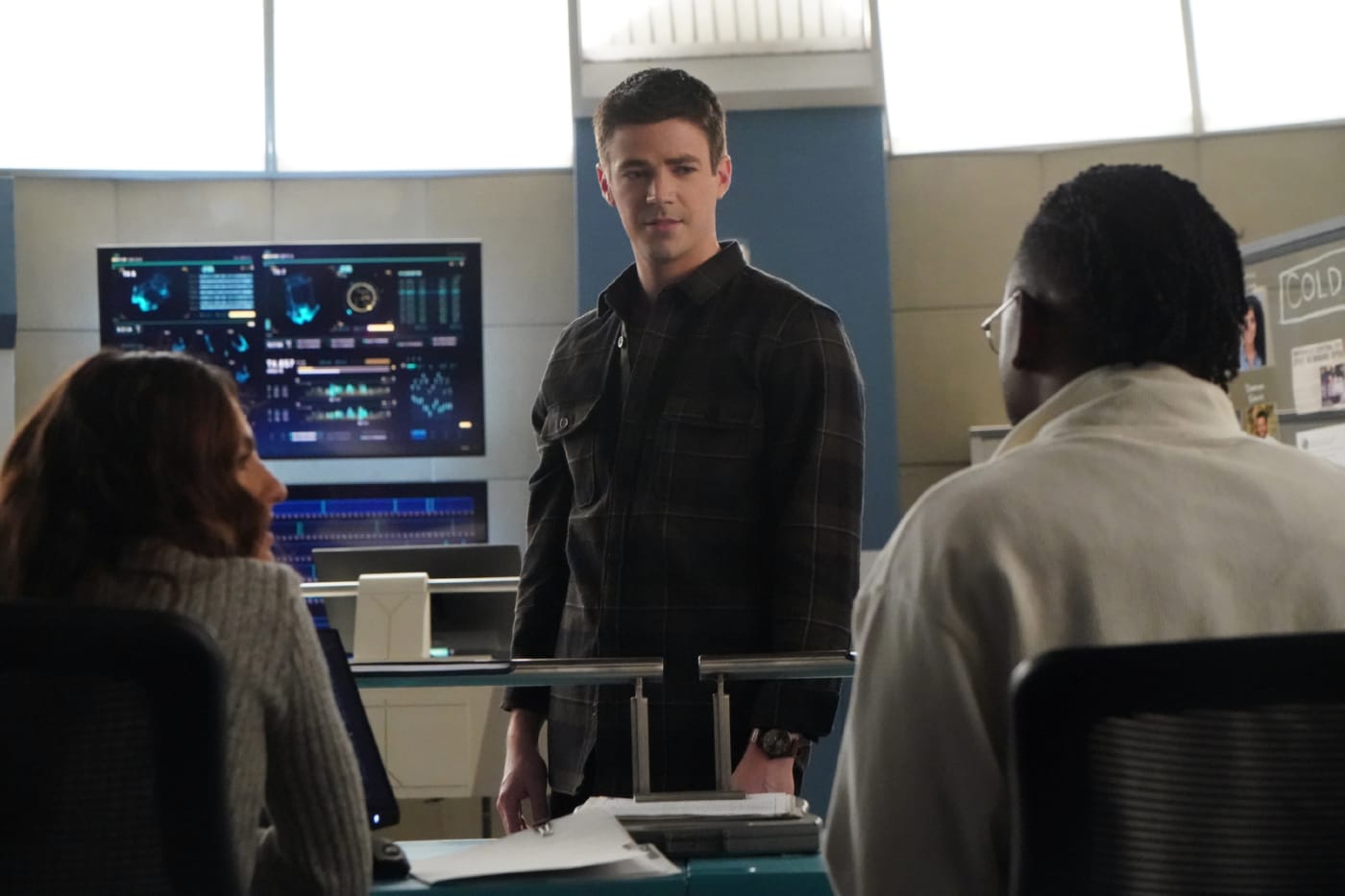 We can see Barry’s growth in several contrasts between him and his team. When Kramer assesses the threat she and her department now face, she starts losing her cool, wondering what the police can do to stop a flaming skeleton with ghostly powers. Joe counsels her to lean on Barry as he did when in her position, and Barry’s new focus and temperament are enough to convince her that Joe is right. (I also love how the cops are getting calls about Deathstorm and treat them just like a normal emergency; supervillains are old hat in Central City at this point.) When Caitlin laments her colossal mistake in believing that Deathstorm was Ronnie trying to come back to her and Frost says that any of them would have done the same, there’s a quick shot of Barry to suggest that’s no longer true; Barry, even if emotionally compromised as Caitlin was, would have been more circumspect about the situation. The proof of that is in how he balances Iris’ condition with Deathstorm’s attacks. And when Chester and Allegra get excited or freaked out while planning or communicating with him, Barry is calm and thoughtful; even when he gets energized while coming up with a plan, he’s measured in showing his emotions. Once more this season, “Death Rises” is a streamlined episode, this time focusing on the hero and the villain.

All of this means that, while not overly exciting, “Death Rises” is good, and very good at what it’s actually doing. And it does have moments spread throughout that work in and of themselves. The standout is Barry using the lightning his speed generates to create platforms in midair so he can keep running towards a fleeing Deathstorm. The visual is cool, and I’m glad we’re still not past being wowed by Barry’s powers, or the writers finding new ways for him to use them. That he fails to catch Deathstorm is a bummer, but it also serves Barry’s growth; he accepts this minor failure and moves on rather than dwelling on it and deflating. There’s also another scene where Joe advises Barry, this time to believe in himself despite the seemingly hopeless situation in which he’s caught. Deathstorm may seem unstoppable, but so did all the foes Barry’s defeated in the past, and Joe knows his boy has got this. I live for these moments, and while this one won’t rank with the very best of them, it still warms the heart to see Joe be Barry’s dad. And while she isn’t around much, Kramer’s continued partnership with Barry grows slightly this week; I like how it’s tied into Joe’s trust in Barry, and how he’s bringing together two people he’s mentored. And the stinger, while not a knockout or anything, promises some emotional hurt next time; it also makes me more convinced that Iris’ time sickness is somehow connected to Deathstorm. This isn’t a great’un, but it’s a good’un.

“Death Rises” is a good episode designed to move the plot along between big moments. It’s lifted above its workman status with good character development and a cool scene involving Barry stretching his powers, but it isn’t a standout.