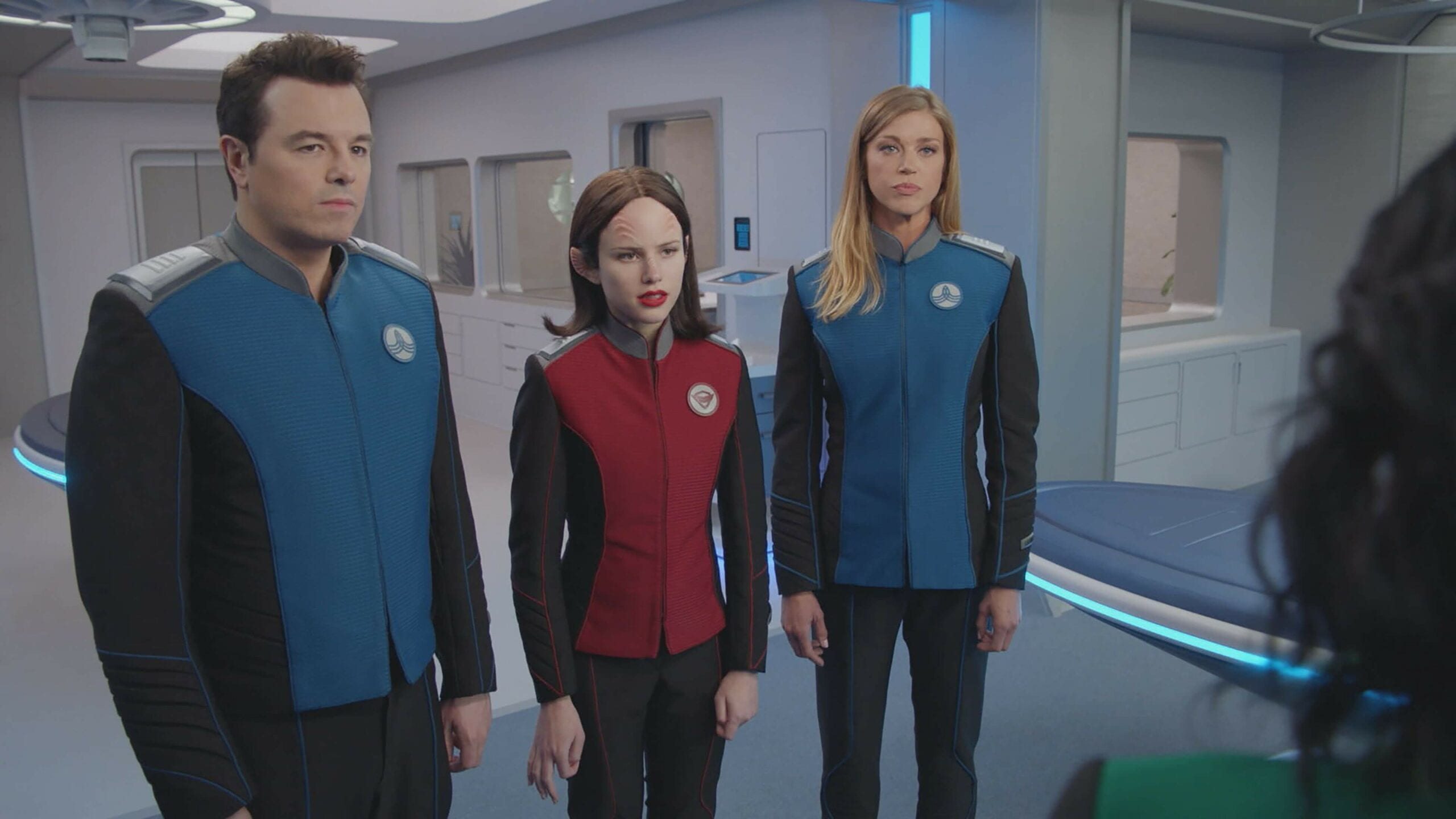 Three episodes into its second season and The Orville continues to focus on its characters. “Home” is more thrilling than either “Ja’loja” or “Primal Urges,” but its primary function is to develop a member of the crew, this time Alara. And it does so effectively, stripping our favorite jar-opener of what she thinks is her greatest strength in order to show her what she’s really made of.

When Alara begins to lose her super strength, Claire deduces that she’s starting to deteriorate because of the change in atmosphere from her home planet, prompting Alara to return to Xelaya to recuperate. Alara’s parents hope to convince her to stay on Xelaya and go to school. Ed contemplates losing Alara for good. Alara’s temporary replacement rubs the crew the wrong way.

At Alara’s core has always been a bit of an inferiority complex. Despite being the strongest person on board the Orville, she doubts herself and abilities. Last year’s “Firestorm” demonstrated how far she’s willing to go to prove her worth when she performed a court-martial-worthy offense to test her skills as security chief. Her lackluster – or, to be more accurate, non-existent – love life is also a sticking point with her, as she doesn’t think anyone will accept her as she is, outside of Ed. “Firestorm” also established that the trigger for her feelings of inadequacy is her parents, who look down on her military service and want her to come home and be a more traditional Xelayan girl. “Home” takes these points and expands on them, adding more layers to The Orville’s best character, next to Ed.

Alara, it seems, was never her parents’ favorite. Her older sister Solana is their pride and joy, a med student engaged to be married who’s perfectly happy at home on Xelaya. This offers some insight into why Alara left; she would always be the lesser daughter at home, but anywhere else she’s the strongest person there is. Still, because her desire for physical strength comes from her insecurities, it’s not enough for her, and she must keep demonstrating her prowess, if only to herself. Having her be debilitated reinforces her feelings of inadequacy; she’s literally immobile around her family, unable to escape their judgment and condescension.

Part of what makes “Home” so good, though, is that it isn’t as cut and dry as Alara having a bad family. Her parents love her, and their misguided admonishments come from a good place; they want her to have a happy life, and it doesn’t occur to them that she could have one any way but the one Xelayans practice. (It doesn’t help that Xelayans, as a rule, consider themselves better than other species.) Solana even admits to envying Alara, wishing she could go on the adventures her younger sister experiences every day. And Alara, when she’s allowed a moment to daydream, imagines herself not fighting some monster or climbing a mountain, but riding along the beach on horseback (or whatever the horse-like creature she’s riding is), something her parents would think more befitting her.

The answer to their impasse lies in Alara’s response to her sister’s suggestion that the smart envy strength while the strong envy brains: “Why can’t a person have both?” When her family is put in danger, Alara shows them how valuable her skillset is by saving their lives, employing both her weapons mastery and her guile to outwit their would-be killers. Moreover, she pushes them to take action as well, particularly her father, giving him the strength he failed to give her and allowing him to save Ed’s life. When it’s over, and her father tearfully apologizes for not being the dad she deserved, Alara is finally able to understand him and what he wanted for her. And now, with her doubts and fears gone, Alara is ready to get to know her family and to show them who she really is. 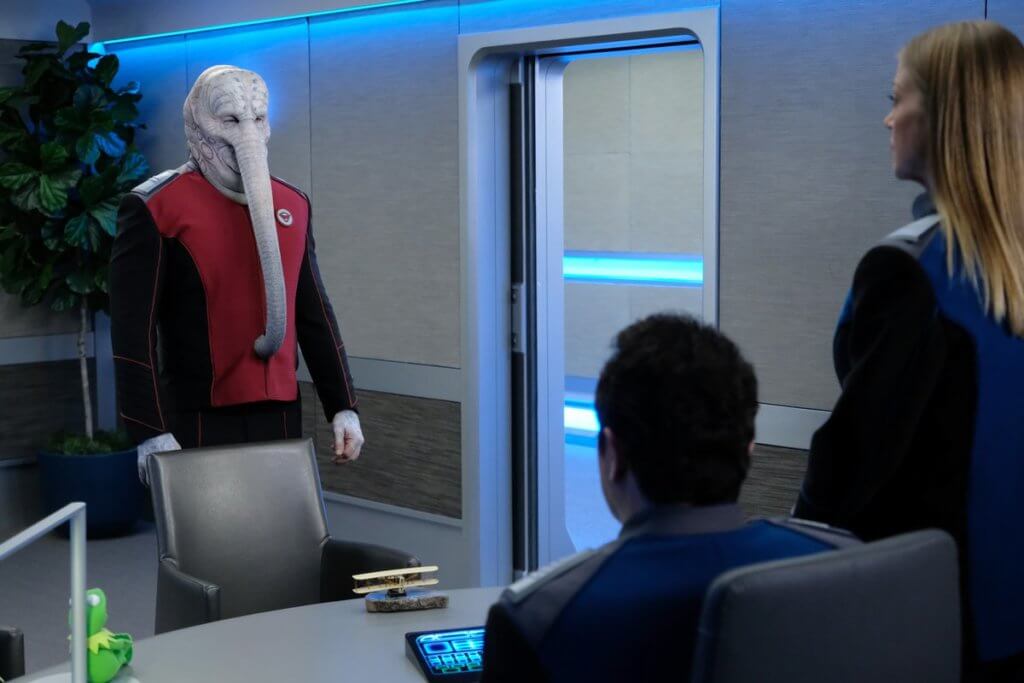 Which is to say, the rumors appear to have been true and Alara is leaving the show. We don’t know for how long yet, but her farewell at the end of “Home” seems pretty final. She says goodbye to each crew member and leaves Ed the most perfect gift possible. The door is open for her to return down the line, and some are speculating that Halston Sage is just taking a leave of absence. I certainly hope so; The Orville won’t be the same without Alara, and whoever they get to replace her won’t be able to help feeling like a weak substitute (as the great Patrick Warburton’s Lt. Thral demonstrates). But if she is gone for good, this was as lovely a sendoff as she could have gotten.

There isn’t a whole lot else to speak of; “Home” is a very focused episode, with no real subplots (unless you count Gordon’s fascination with Xelaya’s gravitational pull). The design of Xelaya is stupendous, and I appreciate that it isn’t one of those one-terrain planets popular in science fiction. There’s a bustling city, a quiet countryside, and a relaxing beach town that acts as a getaway for the affluent race.  The special effects don’t always hold up, but as a whole Xelaya is pretty impressive. Once the danger reveals itself, “Home” becomes quite thrilling, with a building dread that makes the most of its relatively tame threat. The acting is great, particularly from Sage and Seth MacFarlane. Sage navigates Alara’s pain, fear, anger and, ultimately, acceptance well, and she’s going to be missed for however long she’s gone. And MacFarlane holds back on the jokes this time, allowing Ed to lament losing Alara. I thought “Ja’loja” hinted at a stronger, potentially even romantic connection between Ed and Alara, and while a love story was probably never in the cards, “Home” reinforces that they share a bond that is uniquely their own. As much as Ed would be lost without Kelly, I tend to think he’s going to have as hard a time adjusting to Alara’s absence as we are.

“Home” is a bittersweet episode, sad in its waving goodbye to a wonderful character but gratifying in its development of her. I don’t see it being up there with anybody’s favorites, but with a tight plot that focuses on one crew member, a fascinating planet and a tense climax, it’s a good swan song for Halston Sage. Now come back soon, Alara!

“Home” is a bittersweet episode, sad in its waving goodbye to a wonderful character but gratifying in its development of her. I don’t see it being up there with anybody’s favorites, but with a tight plot that focuses on one crew member, a fascinating planet and a tense climax, it’s a good swan song for Halston Sage.