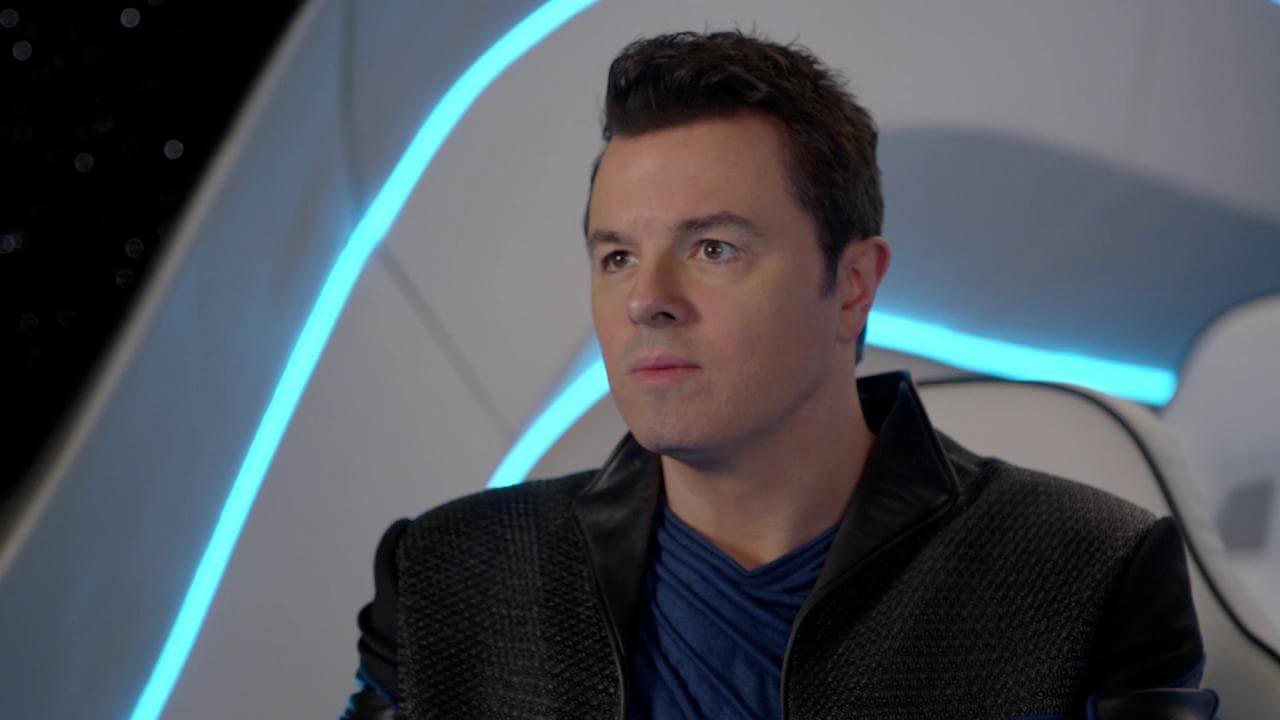 Things picked up considerably on The Orville this week, and “Nothing Left on Earth Excepting Fishes” is the best episode of the sci-fi show’s sophomore season so far. The Krill make their return, Ed is confronted with the shortcomings of his humanity, and Gordon gets some lofty aspirations. All this and Billy Joel!

Ed and Lt. Tyler, having grown closer (off-screen), decide to take a vacation together, but their trip is cut short by a Krill ambush. Gordon asks Kelly for permission to take the Command Test, much to her and Bortus’ puzzlement.

“Nothing Left on Earth Excepting Fishes” begins with Ed more giddy than usual. He’s been eschewing his more passive-aggressive tendencies, taking in stride the monotonous tasks the Orville has been assigned of late, and stepping with a bit more bounce. The reason, as we can easily guess, is Lt. Tyler. Ed’s become quite fond of the ship’s new cartographer, and they spend most nights watching old movies in the captain’s quarters. For the first time since his marriage broke up – meaning for the first time since we’ve seen him – Ed looks happy. And everyone else seems happy for him in turn; Gordon has no hard feelings about losing the girl he liked to his best friend, and Kelly readily agrees to assume command of the Orville while Ed and Lt. Tyler use some of his saved-up vacation leave. The first act of “Nothing Left on Earth Excepting Fishes” is upbeat and hopeful; so we know that can’t last.

In short order, Ed and Lt. Tyler are overtaken and captured by the Krill, who want Ed to reveal some Union codes and threaten to torture and ultimately kill Tyler unless he does. The big twist of “Nothing Left on Earth Excepting Fishes” comes early: once Ed gives up the codes, the Krill show Ed that Lt. Tyler has been Teleya all along! Teleya, if you don’t remember, was the Krill officer Ed befriended while undercover in what is still the series’ best episode, appropriately titled “Krill.” At the end of “Krill,” a captured Teleya promised Ed that his mercy and compassion would be his undoing, as the Krill know nothing but hate and revenge. Now, she’s back to make good on her threat. This is something that I had semi-spoiled for me, as the internet kind of guessed where this was going. The bigger problem with the reveal, however, is that it happens too soon. Lt. Tyler had been in exactly one episode before “Nothing Left on Earth Excepting Fishes,” meaning we didn’t see her and Ed’s relationship develop. The twist would’ve had much more meaning if we got the sense that Ed had really fallen in love with her, or at least was beginning to fall for her. The movie night scene is a very good one, but not nearly enough to convince that Ed is as invested as he says he is, not to mention Kelly and Gordon.

There is an explanation for how rushed the romance is, though, and while it doesn’t quite make up for the missed opportunity of a better-developed plot, it does give some insight into Ed’s frame of mind. Teleya observes that Ed overcompensates for his failed marriage to Kelly by diving into potential relationships head-first, investing in them too quickly, but despite this, still puts his job first. He makes Lt. Tyler out to be the woman of his dreams, and yet when she’s facing death, he gives the Krill decoy codes, despite their assurance that she’ll die if he lies to them. Ed sees it differently; he thinks that he, like all humans, is hopeful. He pushed himself to love Tyler because he believes he can find happiness again, and he gave the Krill false codes because he had faith that his crew would rescue him. And at the end of “Nothing Left on Earth Excepting Fishes,” he trusts Teleya to start the peace process between the Union and the Krill. Does he trust her because of lingering feelings for a woman he won’t allow himself to admit is a fiction, or does he trust her because he believes there is good in Teleya, and in the Krill as a whole? It’s hard to say, and Ed and Teleya would probably each give you a different answer. Whatever the impetus, Ed will strive for a better world, at his own expense and when everyone around him tells him he’s crazy, and that’s what makes him a hero. Seth MacFarlane continues to impress in this role, perfectly embodying Ed’s disappointment when happiness once more eludes him, as well as his optimism that there is good in even his most devastating betrayer.

Ed isn’t the only one overcompensating (if that is, indeed, what he’s doing) in “Nothing Left on Earth Excepting Fishes.” Gordon reacts to Lt. Tyler’s rejection of him not in the expected way, but by striving to better himself and his career. He wants to advance in the ranks, moving beyond being a pilot – even if he is widely recognized as one of the best pilots in the Union – and becoming a leader, maybe even a captain one day. Kelly clearly doesn’t think he has it in him (nor, hilariously, does Bortus), and his initial testing doesn’t offer him much hope of passing, but his eagerness pushes him forward. When Kelly sees him using his training as a pickup line, she elicits the truth from him: it isn’t about how Gordon sees himself, but how others see him. Tyler ignored him and chose Ed, the captain of the ship; but Ed is, at heart, a goofball like Gordon. As captain, though, Ed commands a respect that Gordon simply doesn’t, and if he can attain that status, maybe people will see him as more than just the clown at the helm. I’m glad The Orville didn’t go the usual love triangle route and instead developed Gordon in a more interesting fashion; I hope this thread isn’t over, and we see more of Gordon wrestling with his inadequacies, even if he’s decided command isn’t for him. Scott Grimes is always funny as Gordon, but in “Nothing Left on Earth Excepting Fishes” he reveals some of Gordon’s pain and does it without stepping out of character. It’s a very subtle performance, and it works great. 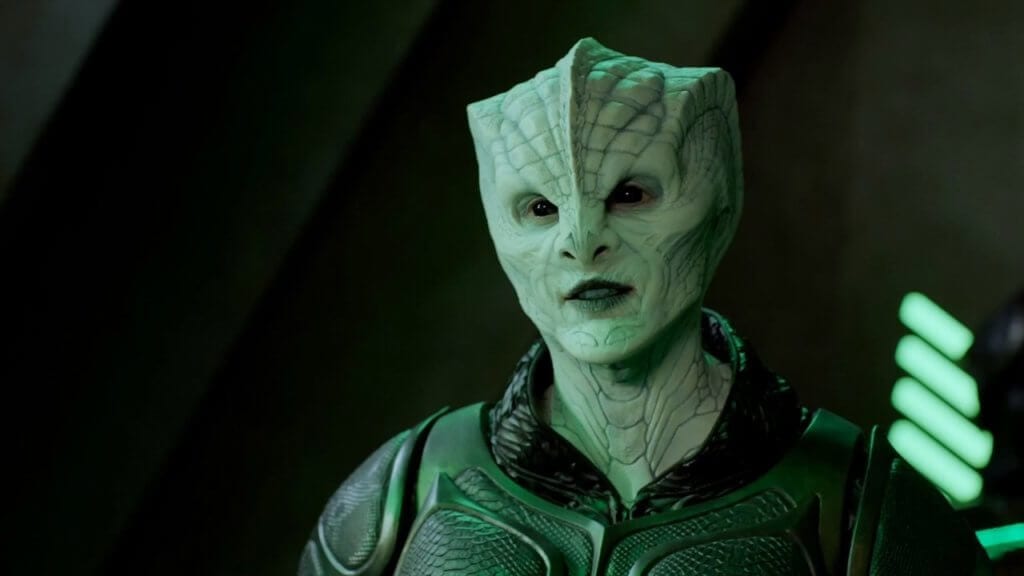 After a trio of more leisurely paced episodes (I hesitate to call them “slow,” because I equate that with boring, and The Orville never is – well, maybe parts of “Primal Urges”), “Nothing Left on Earth Excepting Fishes” escalates the tension immensely. There’s still plenty of character work and the exploration of themes like religious fundamentalism and how to retain your humanity while fighting an enemy that seemingly has none (although this was done better in “Krill”), but the deeper stuff is couched in shootouts, spaceship battles, and a struggle for survival on an alien planet. A new enemy species emerges in the Chak’tal, a nasty race of warriors that want to destroy the Krill; while they’re presented in battle as ruthless killers, the backstory Teleya gives Ed colors them in gray as well, perhaps even more so than the Krill. The Krill wiped out a Chak’tal colony in one of their territory grabs, and they want revenge, and probably to make sure the Krill don’t come back for the rest of them. They also give Ed a glimpse of where the Union and the Krill are headed; if some kind of peace isn’t attained, the Union Ed believes in will be reduced to unending war, and they will inevitably become the very monsters they’re trying to fight.  The jungle terrain on the planet where Ed and Teleya crash land is perfect for their predicament, emphasizing their role as prey for the Chak’tal.

Part of me wants to give this week’s installment a zero for being the first one without Alara (Halston Sage was not in the credits, so it looks like “Home” really was the end of the line for her), and another part of me wants to give it a perfect score for featuring Billy Joel so prominently, but taken objectively, it’s closer to the latter. “Nothing Left on Earth Excepting Fishes” is an excellent episode, jamming in some fun action and thrills while exploring two of the main characters (and one returning guest), expanding on the Krill, introducing new potential villains, and exploring themes that emerged last season. I wish they had held out a little longer on the Teleya reveal to give it more impact, but otherwise, this is a winning episode.

The Orville - "Nothing Left on Earth Excepting Fishes"

“Nothing Left on Earth Excepting Fishes” is an excellent episode, jamming in some fun action and thrills while exploring two of the main characters (and one returning guest), expanding on the Krill, introducing new potential villains, and exploring themes that emerged last season. I wish they had held out a little longer on the Teleya reveal to give it more impact, but otherwise, this is a winning episode.