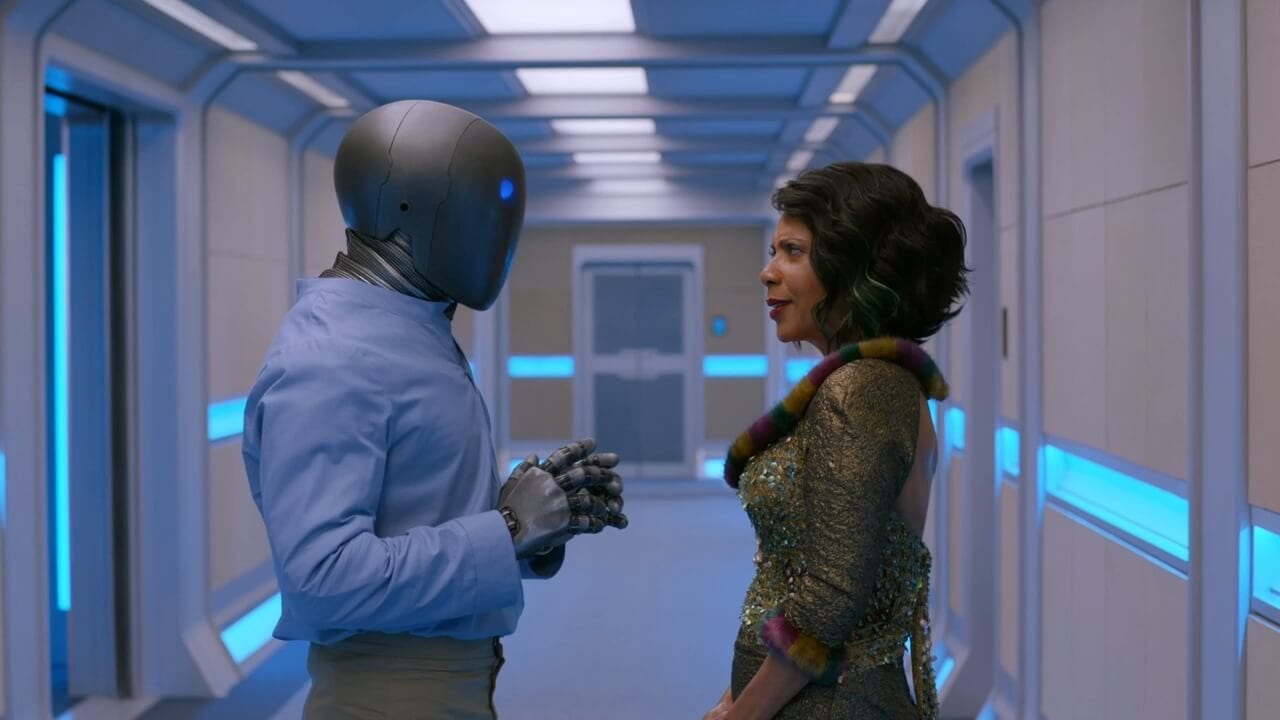 One of the strengths of science fiction is that it can encompass virtually any other genre. Star Wars, for example, incorporates classic fantasy elements in its galaxy far, far away; Blade Runner is a hardboiled detective noir involving androids; Alien is a horror movie in space. The Orville, like Star Trek before it, uses its sci-fi setting to explore many different genres, and through those genres its characters. “A Happy Refrain” embraces this more than any other episode so far, using a romance onboard a spaceship to develop Claire and Isaac. It’s also an example of a show doing exactly what I didn’t want it to do and making me change my mind.

As their interactions increase, Claire finds herself developing romantic feelings for Isaac. After seeking advice from Kelly, she asks the android out on a date. Will Isaac’s inability to feel nip their courtship in the bud before it can fully blossom?

I didn’t want this. From as far back as “Into the Fold,” I’d hoped Claire and Isaac would remain platonic, with him becoming a part of the Finn family in more of an eccentric uncle capacity. I believed this is where The Orville was taking the relationship, even when Claire asked Isaac to accompany her to the Ja’loja in the season premiere. But here we are, and their bond is becoming romantic. Initially, it feels boring, like the most obvious direction they could have gone. Luckily, “A Happy Refrain” devotes itself entirely to examining how a human and a machine could find love, and to my great surprise, it sells the idea.

As expected, it’s through Isaac’s devotion to her sons that Claire starts to see him in a different light at the beginning of “A Happy Refrain.” For all her bluster about being able to raise her children on her own in season one, Marcus and Ty are thriving thanks to Isaac, and having him around makes Claire feel, as she puts it, “warmth.” After a wine-assisted therapy session with Kelly (who uses the opportunity to point out more of Ed’s shortcomings, because she wouldn’t be Kelly if she didn’t), Claire decides to take a chance and ask out Isaac. They get off to an expectedly rocky start, with Isaac accessing Claire’s personnel files and instantaneously learning everything about her (and Baltimore). But he makes a real effort to be more pleasing to Claire, giving himself human form via the Environmental Simulator (much, one suspects, to actor Mark Jackson’s relief) and purging himself of his knowledge of Claire’s history. Things go so well that the unlikely couple even go to bed together. Claire seems to have found the romance she never thought she wanted… right up till when Isaac dumps her.

While Claire was being swept up in romance, Isaac was viewing their dating as a means of studying the intricacies of human romantic relationships. His efforts to please Claire were purely scientific, and once he achieved what he understood to be the culmination of the endeavor – sex – he ended it, his research complete. It’s a clear representation of a man losing interest in a relationship once he gets sex, but “A Happy Refrain” doesn’t make it as simple as that. Isaac isn’t indifferent to Claire’s feelings; he simply doesn’t understand them. It makes no sense to him why she would no longer want him in her life, or in the lives of her sons. When the rest of the crew throws shade at him for hurting Claire, he again doesn’t know why. There is no malice in his actions, even the more apparently malicious ones; the highest-developed life form onboard the Orville is, in this instance, ignorant. 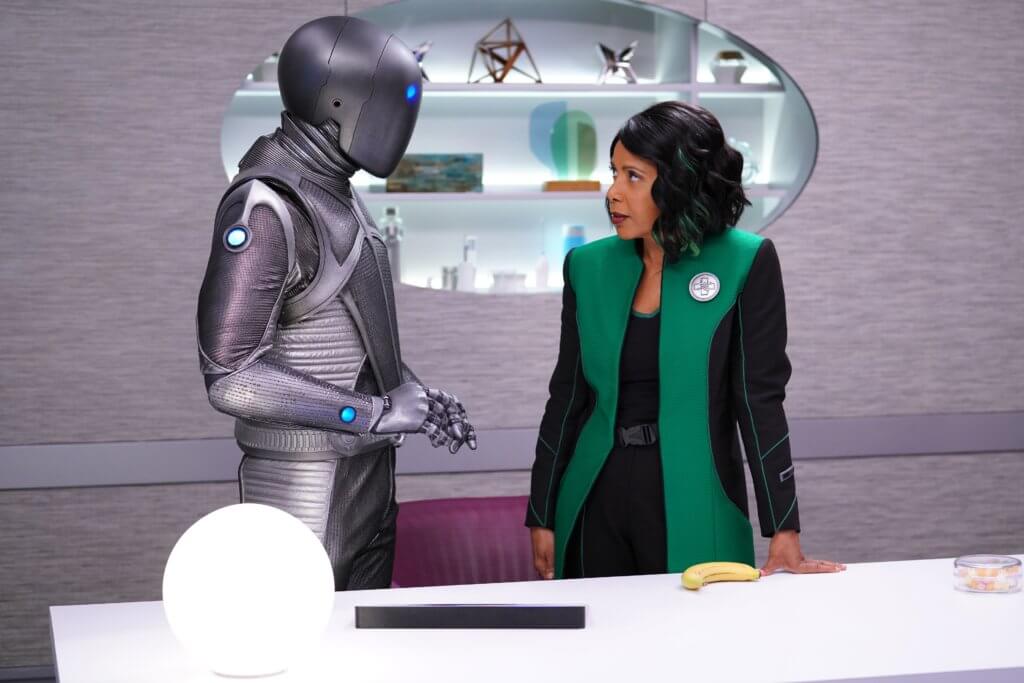 But there’s still more to it than what is obvious. Isaac not only doesn’t understand Claire’s feelings for him; he doesn’t understand his own reciprocal feelings for her either. Every so often throughout “A Happy Refrain,” Isaac demonstrates that there’s more going on in his head (for lack of a better term) than simple analysis. For example, after Ty’s concert, he stares at Claire while she talks to other people, uninterested in anyone but here. When Claire kisses him outside her door, he hesitates before walking down the hall, tilting his head in silent contemplation of the affectionate gesture. And after he ends the relationship and she cuts him out of her life, Isaac makes his first technical mistake in his tenure as the Orville’s science officer. A diagnostic of his system reveals that Isaac’s circuits aren’t functioning at their peak level because he no longer has Claire in his life. Isaac’s programming is adaptive, and he’d adapted to Claire; with her gone, his whole system is out of whack. Or, to put it another way, he’s grown accustomed to her face. Again, there is a real-life parallel: the relationship the man was quick to discard was not as disposable as he thought, and he must win her back or be forever broken.

“A Happy Refrain” executes this plot superbly. It very easily could’ve become corny, or not been believable from the start. The writing is obviously a factor, but so are the excellent performances. Penny Johnson Jerald (so memorable as the vicious first lady in 24) sheds a different light on Claire, now portraying the typically matronly doctor as a woman in love, and she never hits a false note. Claire still feels exactly like Claire, but with a new layer to her personality revealed. At least as impressive is Mark Jackson, who pulls off the surely difficult feat of allowing us to feel the humanity of a character whose face we cannot see. Even in human form, Isaac remains relatively expressionless, and Jackson still conveys his confusion, eagerness, and unknowing love. As with “Into the Fold,” these two carry the episode on their shoulders, this time with even less help, and they’re phenomenal. 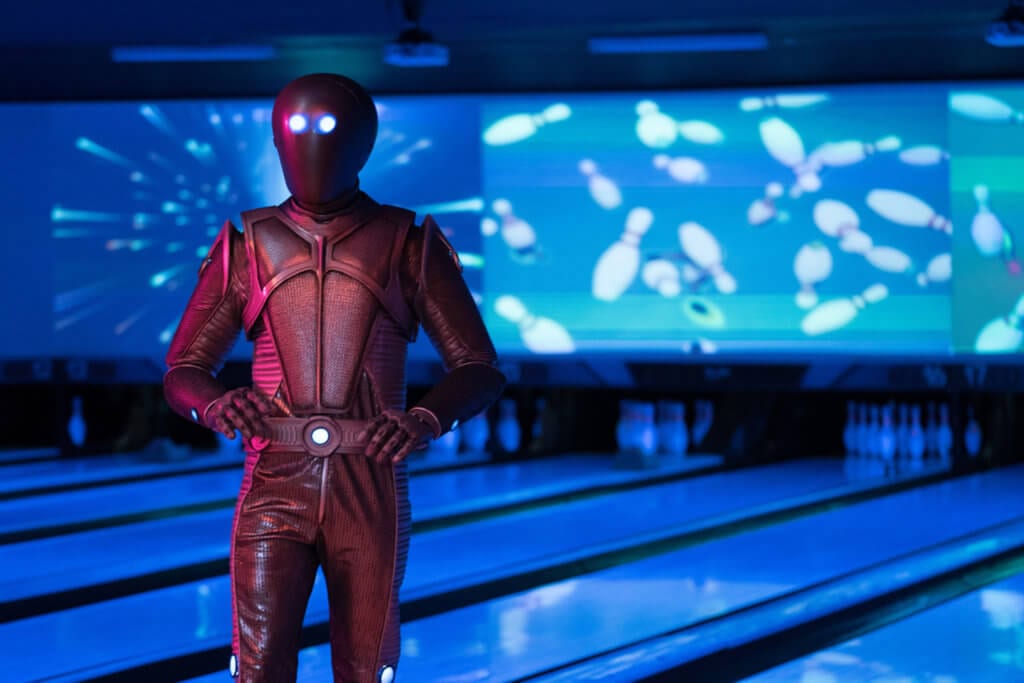 Additionally, “A Happy Refrain” is the funniest episode of season two yet. The only thing that possibly qualifies as a subplot is Bortus’ decision to grow a mustache, and every aspect of it is hilarious, from the sight gag of the Orville’s second officer giving himself the full Tom Selleck to the tiff it causes with Klyden. Isaac seeking romantic advice from John (and only John, as he makes clear to Gordon) also leads to big laughs, like Isaac’s outfit designed to make Claire sour on him, and John’s crossed wires with the ensign he’s dating. And I greatly appreciated the great Norm MacDonald showing up in person at long last. The Environmental Simulator is put to good use as well, with the dating possibilities the room offers explored; Isaac and Claire go on more formal dinner dates, while John takes Ensign Turco bowling. The Orville may never have looked more fun (except maybe when Ed, Gordon and John dropped themselves into a Western sometime last season). Finally, the music is perfectly chosen, once again highlighting the show’s ability to invoke emotion in us through its pop culture references. “Singing in the Rain” is great, but my favorite was J. Geils Band’s “Centerfold” at the bowling alley. Things like this make it impossible to dislike The Orville.

“A Happy Refrain” might be the best episode of season two, and it’s just about a burgeoning couple trying to date. Claire and Isaac grow both together and individually, the humor is spot on, and the ship feels like a place you’d want to live, or at least party. There don’t have to be battles or grand ethical discussions to make The Orville great; just characters we love living their lives, with some laughs along the way.

The Orville - "A Happy Refrain"

“A Happy Refrain” might be the best episode of season two, and it’s just about a burgeoning couple trying to date. Claire and Isaac grow both together and individually, the humor is spot on, and the ship feels like a place you’d want to live, or at least party.