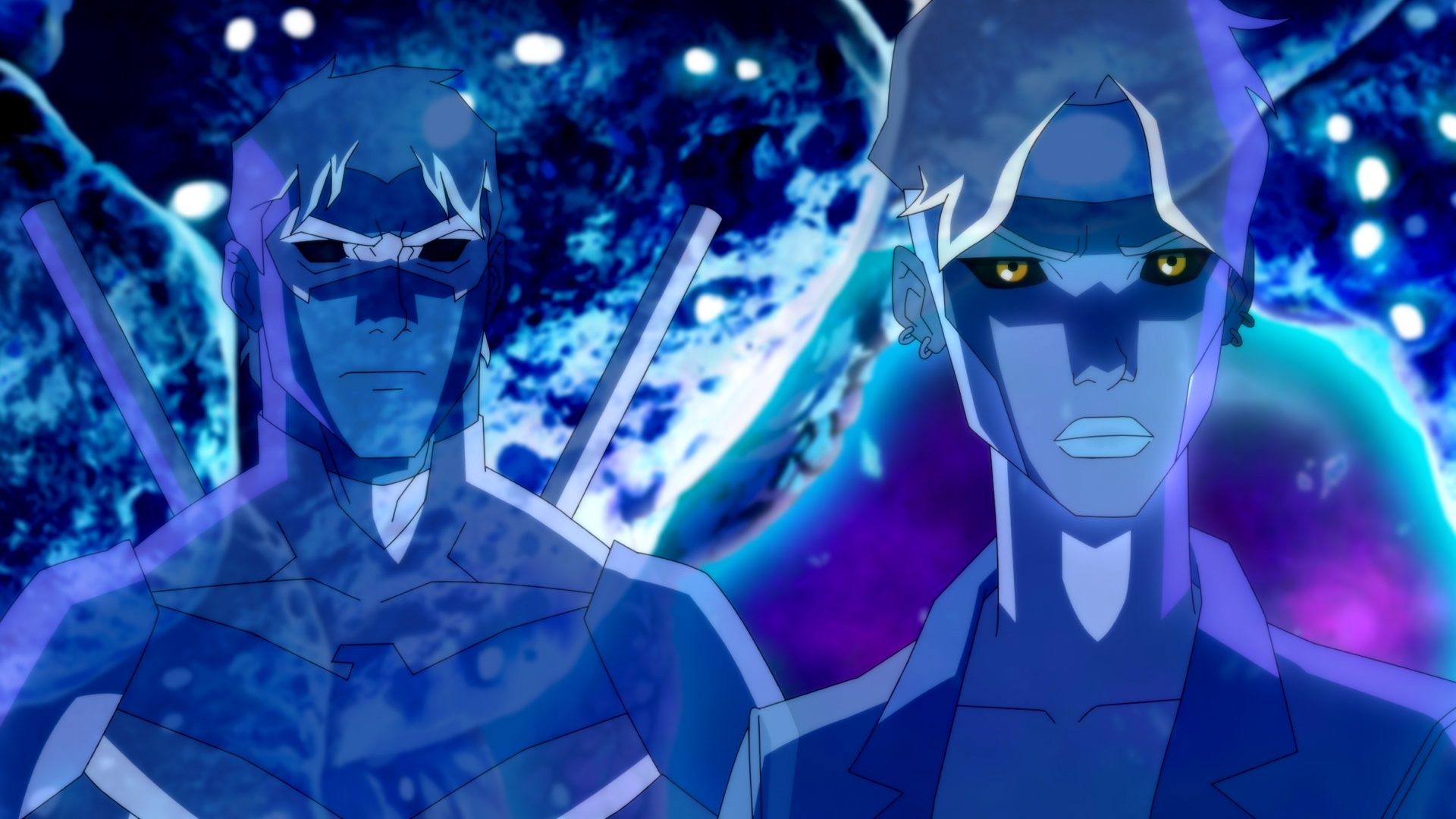 In “Zenith and Abyss,” Lor-Zod is on Oa searching for the Kaizer-Thrall. Green Lantern Tomar-Tu tells him that the object is on its way to Earth. Lor tells him he hopes he turns out like his father, Tomar-Re. In the Phantom Zone, Dick and the others have found Conner. They offer to take him home; Zod hears everything and urges them to go on. Forager and Arthur Curry bring the Kaizer-Thrall to Miss Martian, who connects with it telepathically. The Kaizer-Thrall is a shell containing the brain of an 11-year-old human boy named Danny Chase put there by Desaad. Prince J’emm contacts Miss Martian and informs her that Conner may still be alive. Prince J’emm and Phantom Girl tell M’gann she may be the only one who can bring Conner back. Superman vouches for Phantom Girl, seeing her ring. Phantom Girl is unable to phase back into the Zone. In the Zone, Conner and Zod’s forces contain his friends. Danny knows the location of the Phantom Zone and can get M’gann there with a Motherbox supplied by Orion. Phantom Girl receives a transmission from her friends (really M’comm disguising his voice) and unwittingly reveals the plan. On Thrombus, a planet under a yellow sun, Danny opens a Boom Tube. Conner is reluctant to leave, afraid of hurting M’gann. General Zod orders him to exit with him, and Conner collapses in pain on Thrombus, finally affected by his wounds. 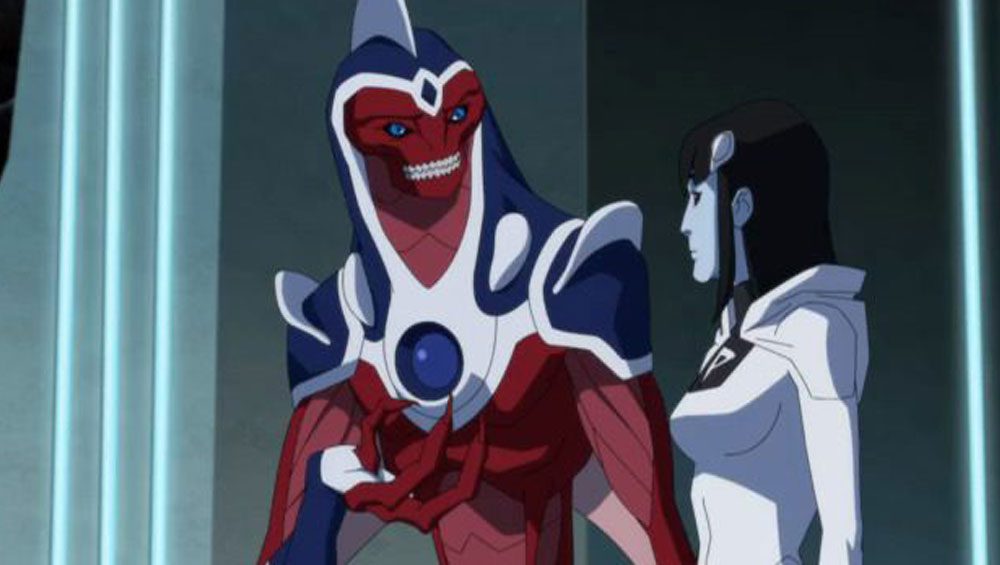 It’s kind of dumb that the Green Lanterns will just tell anyone about things like the Kaizer-Thrall. Sure, Lor-Zod doesn’t have a criminal record in the present day, but giving out sensitive information like this seems like a major liability. They’ve done a great job building him up as a villain, though. The atmosphere and music are so creepy when he tells Tomar-Tu to follow in his father’s footsteps. This guy is beyond help; he sees Tomar-Re’s noble sacrifice as a joke. Anybody in a room with Lor-Zod is in peril, and that makes him exciting to watch. Phil Morris delivers his lines in an unsettling way, calm but malicious. It’s also impressive to note that he has been pulling double duty as both Lor and Dru Zod, and he also voiced Rocket’s ex Noble in her story arc. All of these characters sound distinct; Dru has a perfect military cadence, Lor is creepy but in a manipulative, charismatic way, and Noble seemed like any normal guy. 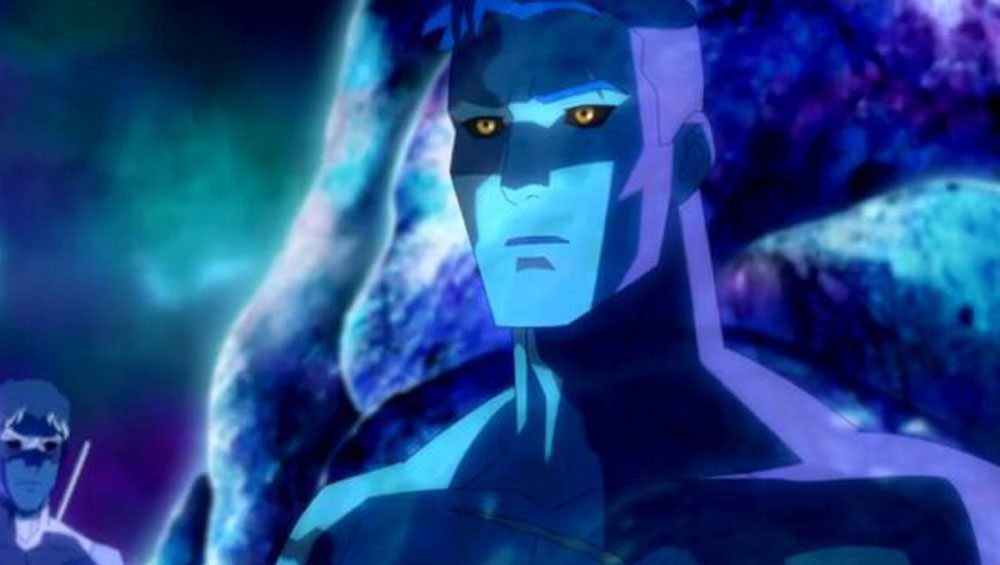 What a tragic development with the Kaizer-Thrall. This reminded me of Cliff Steele’s brain being trapped in a robot body in Doom Patrol, although Danny’s prospects are considerably bleaker. At least within Young Justice, this may be the single worst thing Darkseid and his cronies have done. It also proves beyond any doubt that Lor and M’comm are incapable of empathy, no matter how sad their childhood sob stories may be. They saw an imprisoned, tortured child as an opportunity to cause more pain and suffering rather than someone who needed help. Danny’s own kindness makes it even harder to stomach; he was willing to subject himself to pain and possibly death to help bring Conner back, someone he doesn’t even know. When M’comm psychically zapped Danny away, was this “killing” him or removing his soul from the Kaizer-Thrall? That would really be dark. It would also be introducing a character and writing them out less than an episode later, but it’s not out of the question. This is all to say that Greg Weisman, Brandon Vietti, and their team have absolutely killed it with the villains this season. Vandal Savage is still my favorite and would be hard to top, but wow. Lor-Zod, in particular, is masterfully written, animated, and acted. 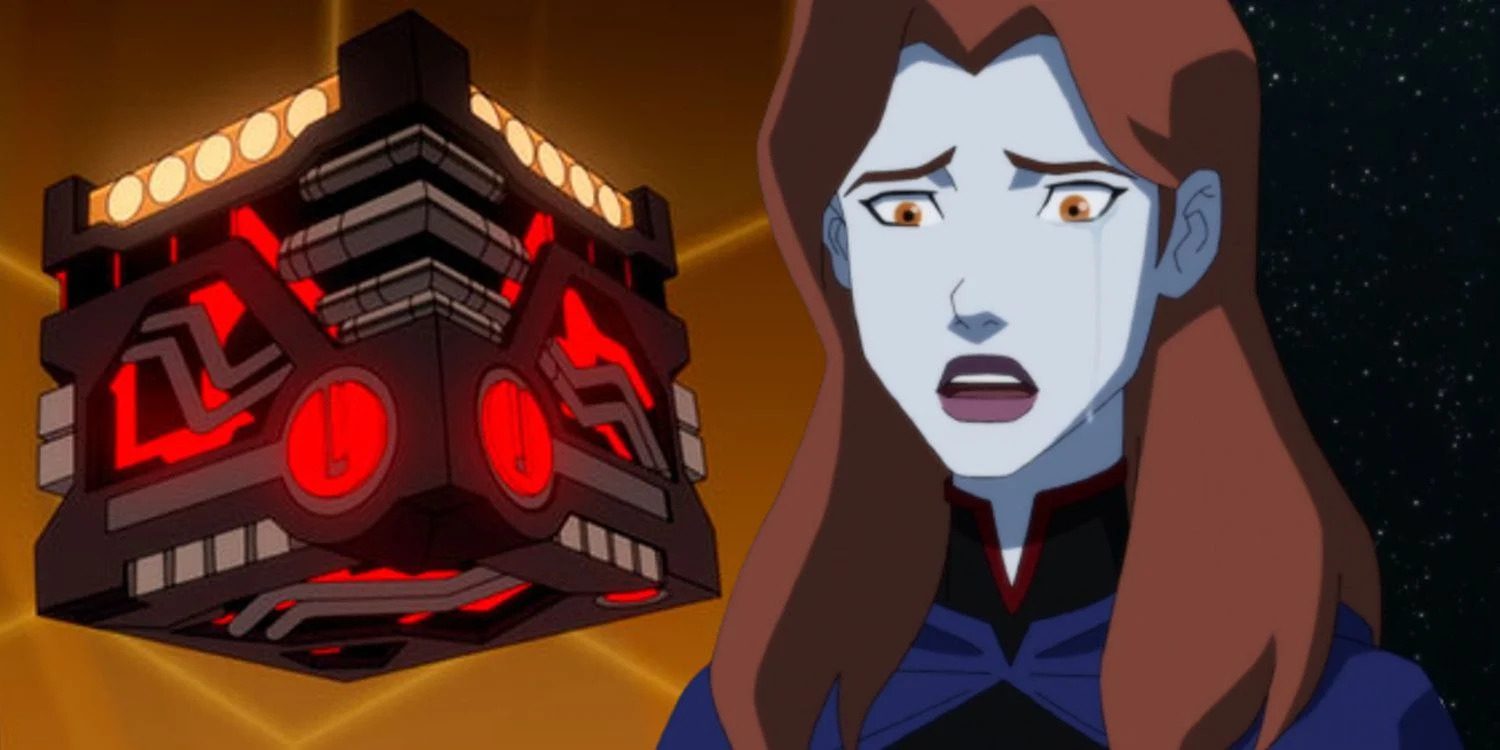 Conner’s mental enslavement to the Zods continues in “Zenith and Abyss” to the point of his potential demise. I’m sure they won’t kill Conner off from his wounds, though; the entire season would have been in vain. Next week’s episode should contain what I’ve really been waiting for: his reunion with M’gann and Superman. Superman will meet Zod as well, which hasn’t happened before in the Young Justice universe, with Zod and Ursa having been in the Zone for over 40 years. They also leave us on a cliffhanger, with Lor-Zod meeting his parents. Will they accept or even believe him? They likely have no conception of time travel, and we know they aren’t aware Ursa is pregnant. 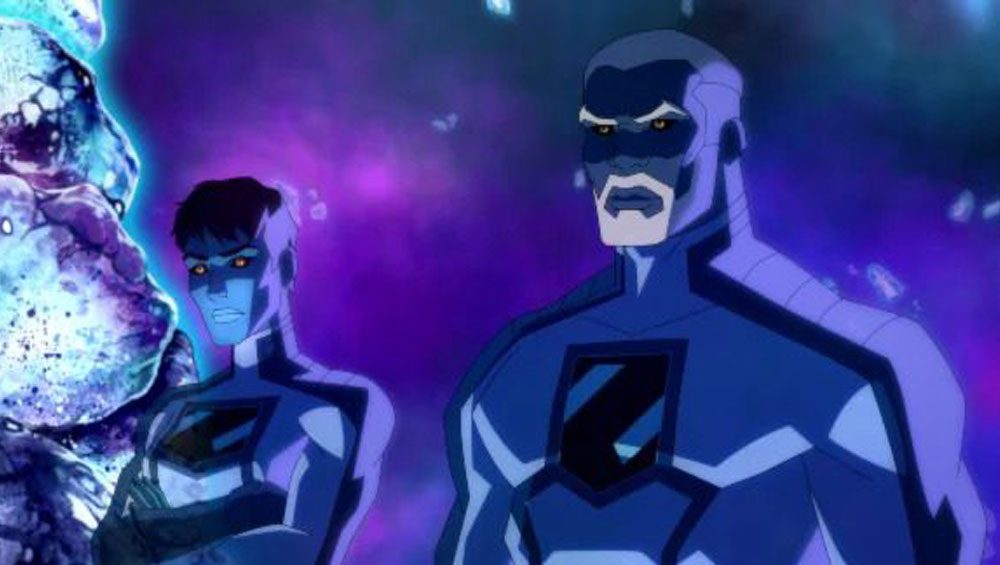 Then, of course, we have the Legion of Superheroes, not to mention Nightwing, Artemis, etc. It’s strange that Conner remembers his friends (albeit in bits and pieces) but still chooses to follow Zod, a stranger before his time in the Zone. This could have to do with the Zone sickness itself; Zod is the one who explained it to Conner and helped him know which visions to ignore and which were real. This would earn some loyalty from someone as honorable as Conner, and the sickness may be making him more easily misled, too. It’s obvious that the Zods are essentially running a cult that worships themselves, but things like this are never obvious to the people involved. At this point, I wonder if Phantom Girl is right that only M’gann could bring Conner back from the brink. Would anything restore him to the way he was before? I’m also waiting for M’gann, Aquaman, and Black Lightning to realize Bart really is missing and that most of the original team is trapped in the Zone. This isn’t a complaint; I’m just very impatient and eager to see how everything ties together. Also, how is the team using telepathy in the Zone without M’gann? Did I miss something, or is this something Zatanna can do with her magic? 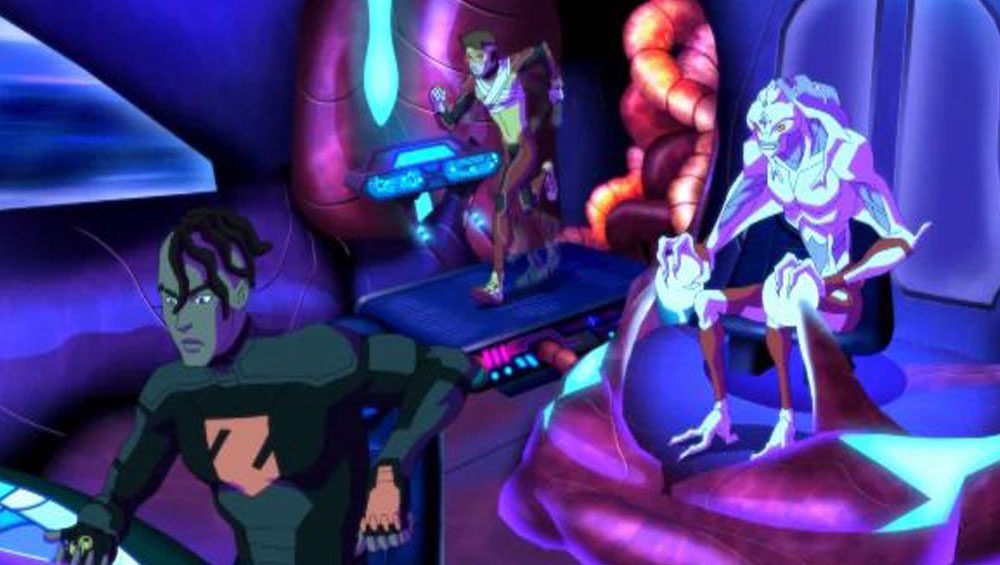 Overall, I loved “Zenith and Abyss.” With two episodes left, Phantoms is ramping up the stakes and the drama in droves. I’m sure Conner will reconcile with his friends, and the Kryptonian criminals will be dealt with in the next couple of episodes, but I’m eager to see how this plays out. In the meantime, “it’s glamour time!”

Overall, I loved “Zenith and Abyss”. With two episodes left, Phantoms is ramping up the stakes and the drama in droves. I’m sure Conner will reconcile with his friends and the Kryptonian criminals will be dealt with in the next couple of episodes, but I’m eager to see how this plays out. In the meantime, “it’s glamour time!”