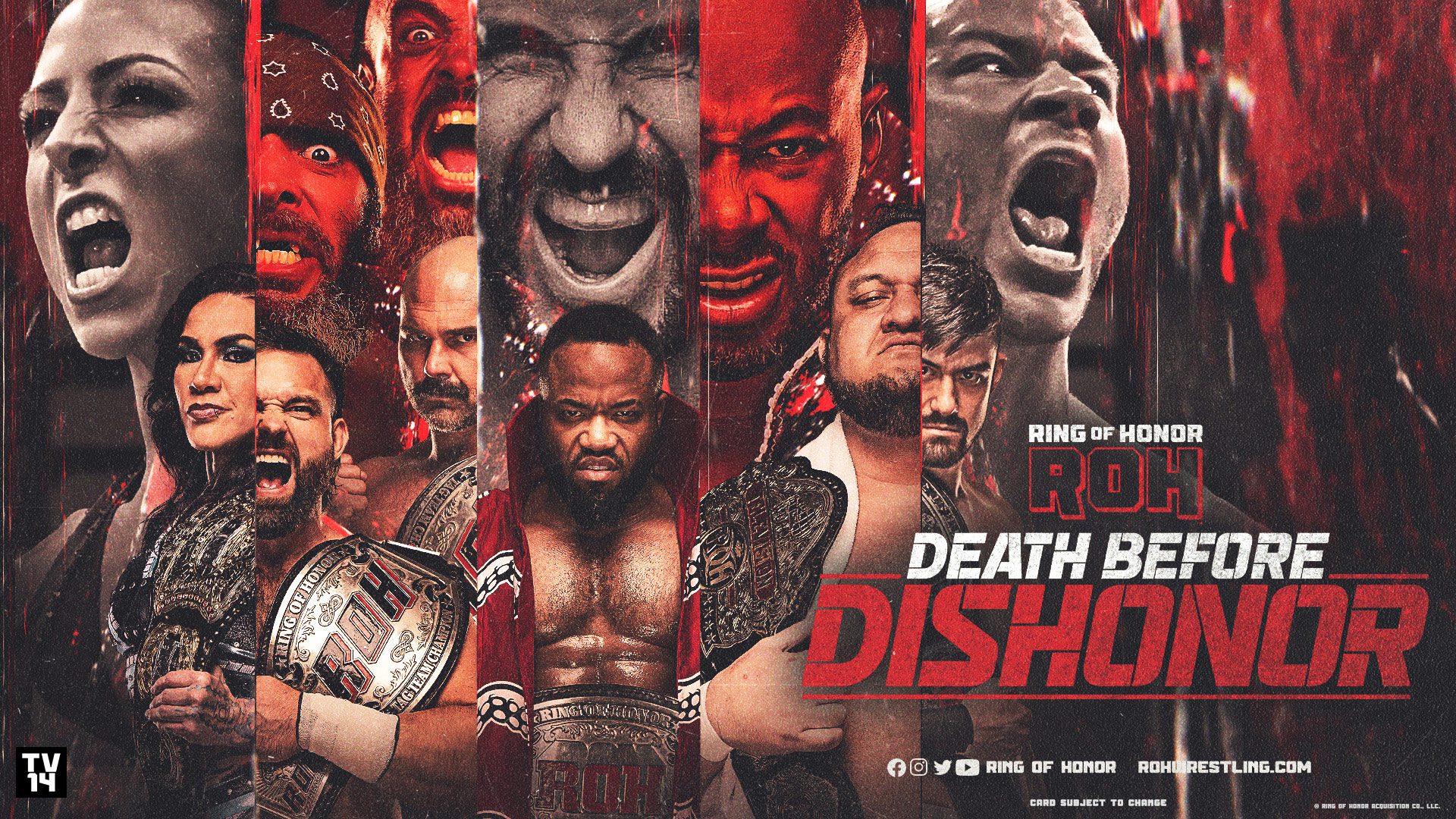 ROH Death Before Dishonor results and commentary from Danny Damage!

Since ROH is still without a weekly TV show, any build these matches had has been done on AEW/social marketing. Nonetheless, with Claudio, Samoa Joe, Jay Lethal, FTR, The Briscoes, Serena, and Mercedes on the card, it’s already a hell of a lot more value for money than 99% of AEW PPVs. Also, the sound of Ian Riccaboni and Caprice Coleman on commentary is always like a warm, buttery bath for my ears.

Let’s crack on before Tony Khan gets on Twitter, puffs his little pigeon chest out, and starts acting like Vince McMahon again. 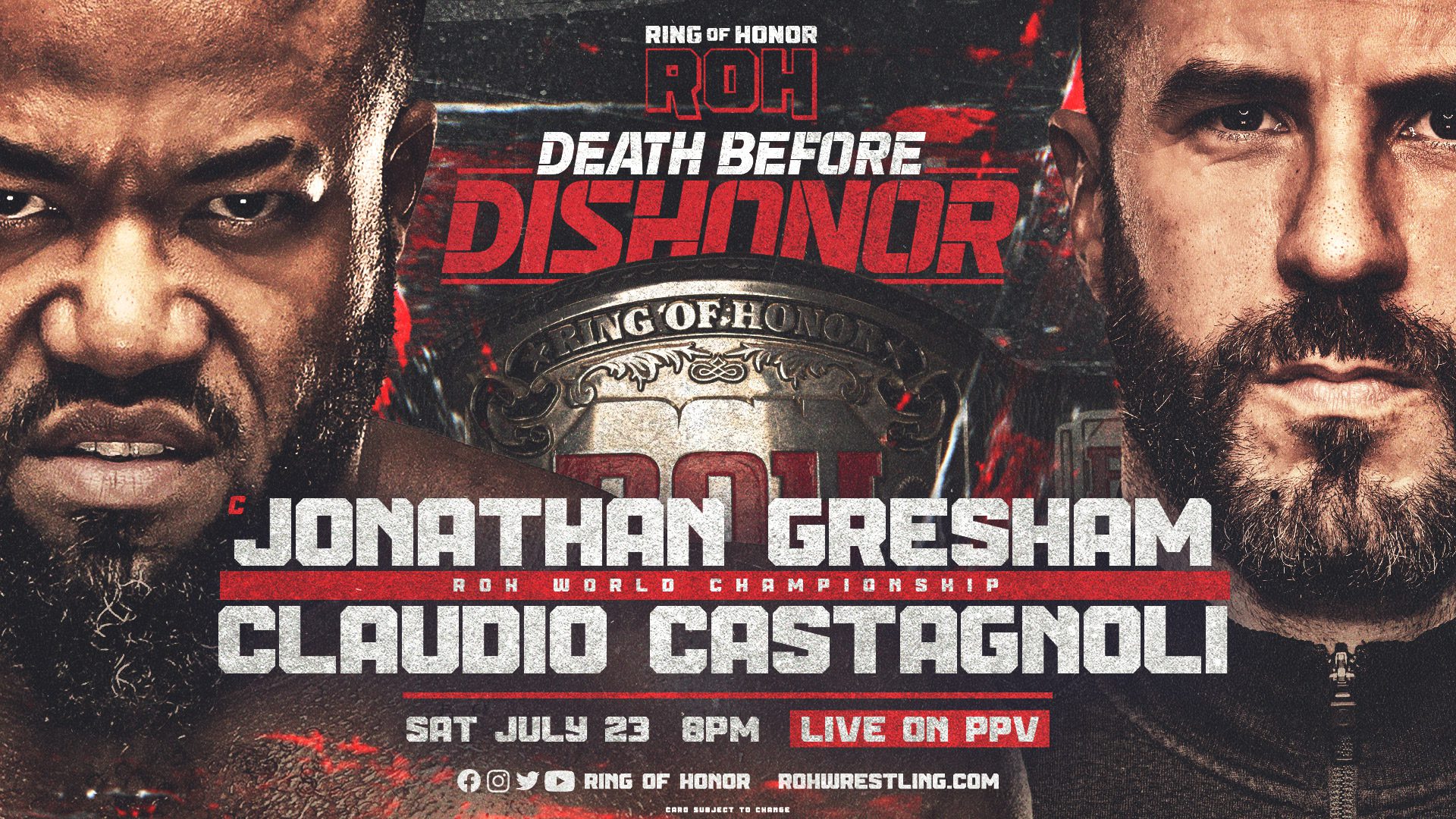 The two chaps gave us a decent 15-minute opening contest. Gresham has barely had any exposure since Tiny Tony bought ROH, so this makes all the sense going forward. William Regal also joined Coleman and Riccaboni during the match, which all amalgamated into a grand way to set the tone for the rest of the night/ROH in the future…we can hope. 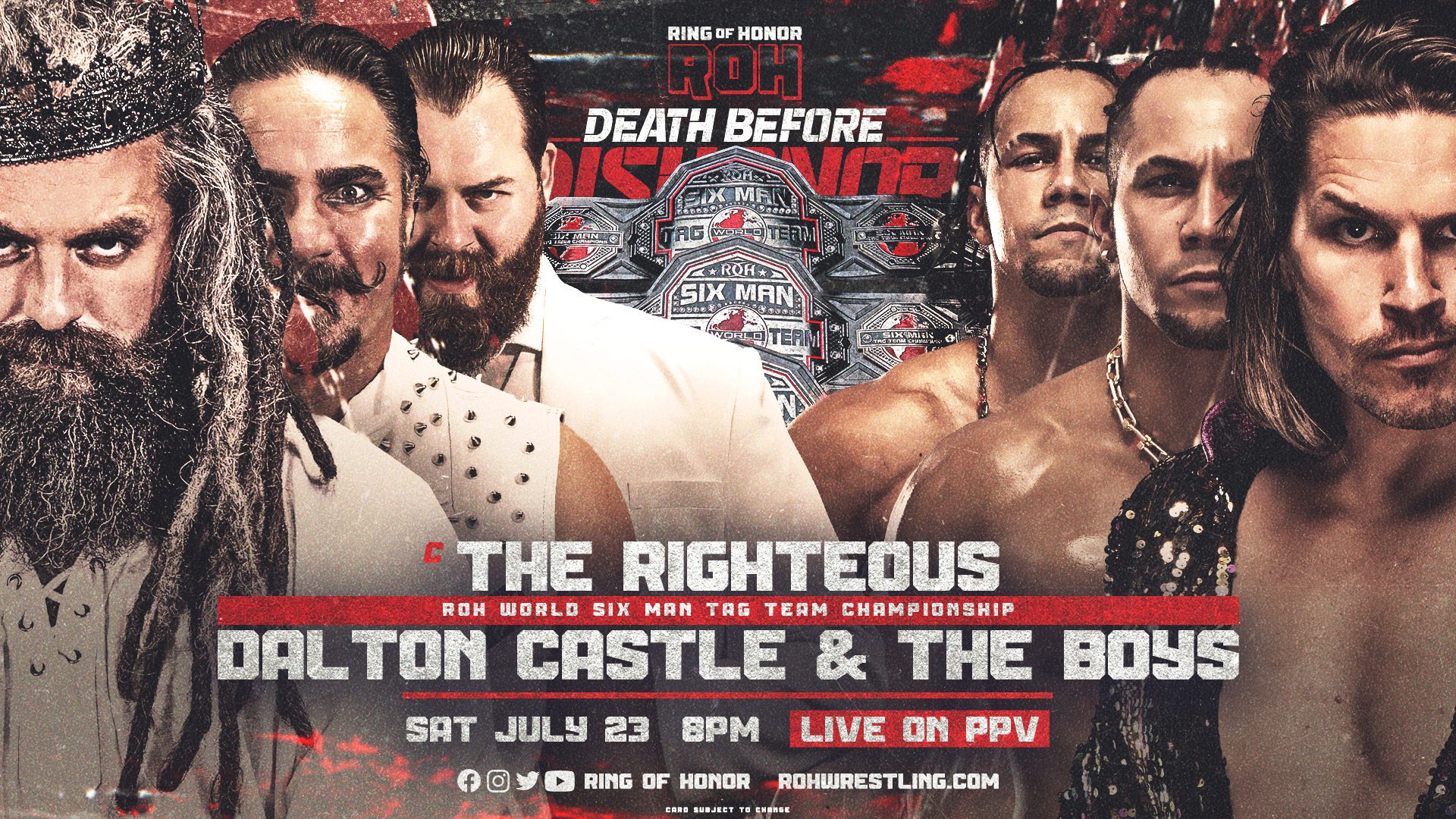 Not for me, thanks. I’ve stated numerous times that 6-man tags often fall apart and turn into incoherent flipping contests where the referee just gives up; this was one of those instances. Dalton spent a lot of time chucking his teammates around before picking up the win.

I’ve nothing against the occasional 6-man tag team match when the situation calls for it, assuming the rules of tag team wrestling are actually being followed. However, devoting an entire division to them seems rather excessive, especially for a promotion with zero hours of weekly programming. Even at two hours a week, ROH could fall prey to having so many belts on their roster members that being a champion doesn’t seem that special. 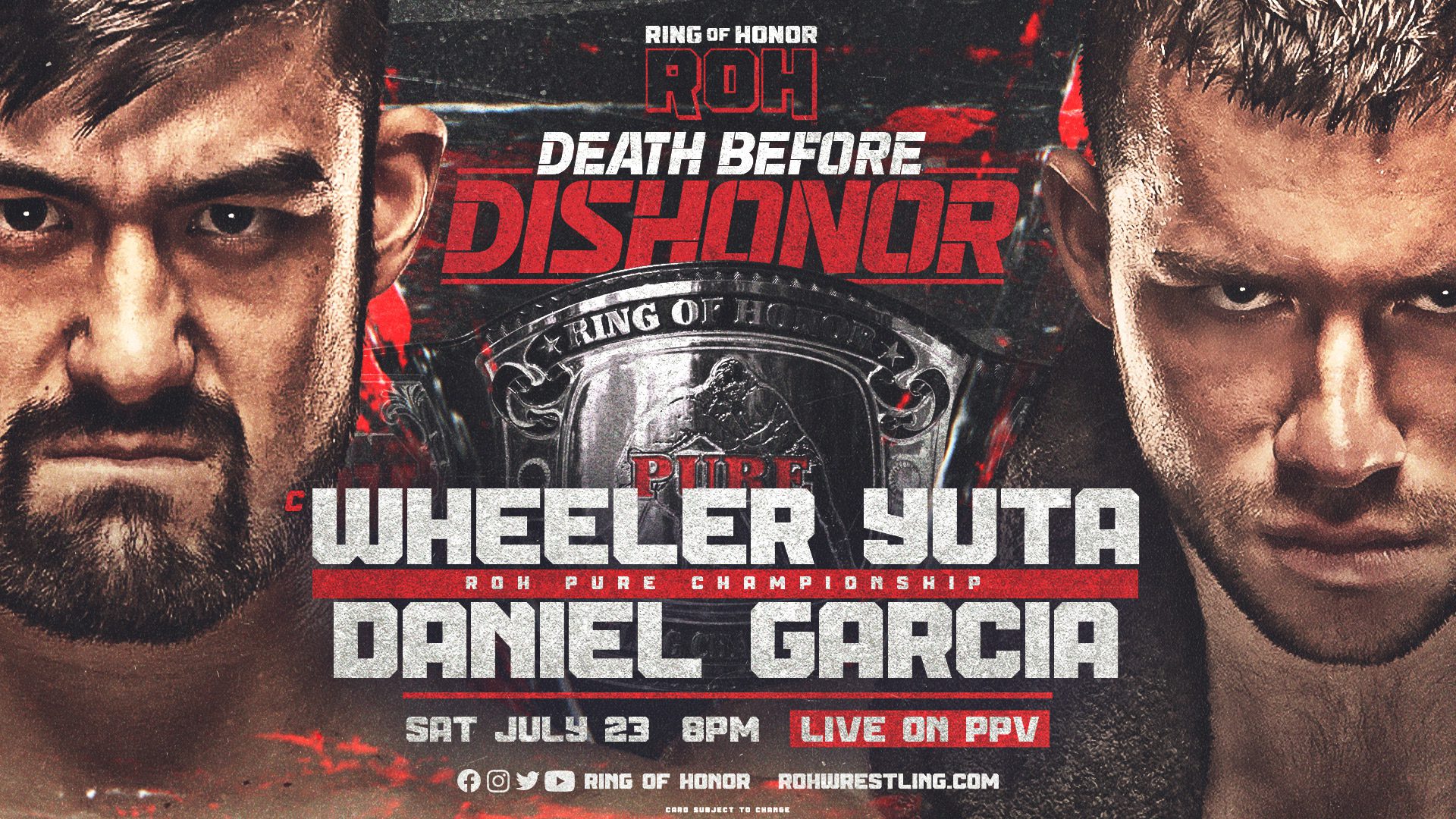 I like the Pure Championship. The rules aren’t that complicated, and it’s a nice change of pace. It’s also an excuse to demonstrate many basic concepts within a wrestling contest and reiterate why those things are done. It sounds strange for me to type that, but most of the AEW/Tony Khan-associated matches just fly by with no time to digest anything. Meanwhile, many people are seeing some of this stuff for the first time. Regal was back out at the table for this one, too, so that was a nice Brucey bonus.

Garcia made the only rope break in the match, and after a hard-hitting back and forth, Yuta rolled Garcia up to retain his title.

I’ll be honest; this feud is new to me. The two brothers adhered to the Code of Honor at the start of the match, but Rush didn’t take too long to start slapping his little brother around disrespectfully. This was an excellent example of how high-fliers can actually have a decent match that tells a story; take note Wednesday and Friday night mud-show crew.

Dragon was building some momentum and looked close to ending the match, but Rush played possum, lured him in, and hit his finish.

Rush has lots going on, but Dragon is too much Rey Mysterio/Fenix for my taste. And by that, I don’t just mean that he’s yet another masked stunt guy. I mean Dragon got belly-to-belly suplexed from the ring apron to the arena floor, and he was back on the offensive five seconds later. It took several dollops of heelish advantage-taking AND a pair of Rush’s Bulls’ Horns to put the smaller competitor down. 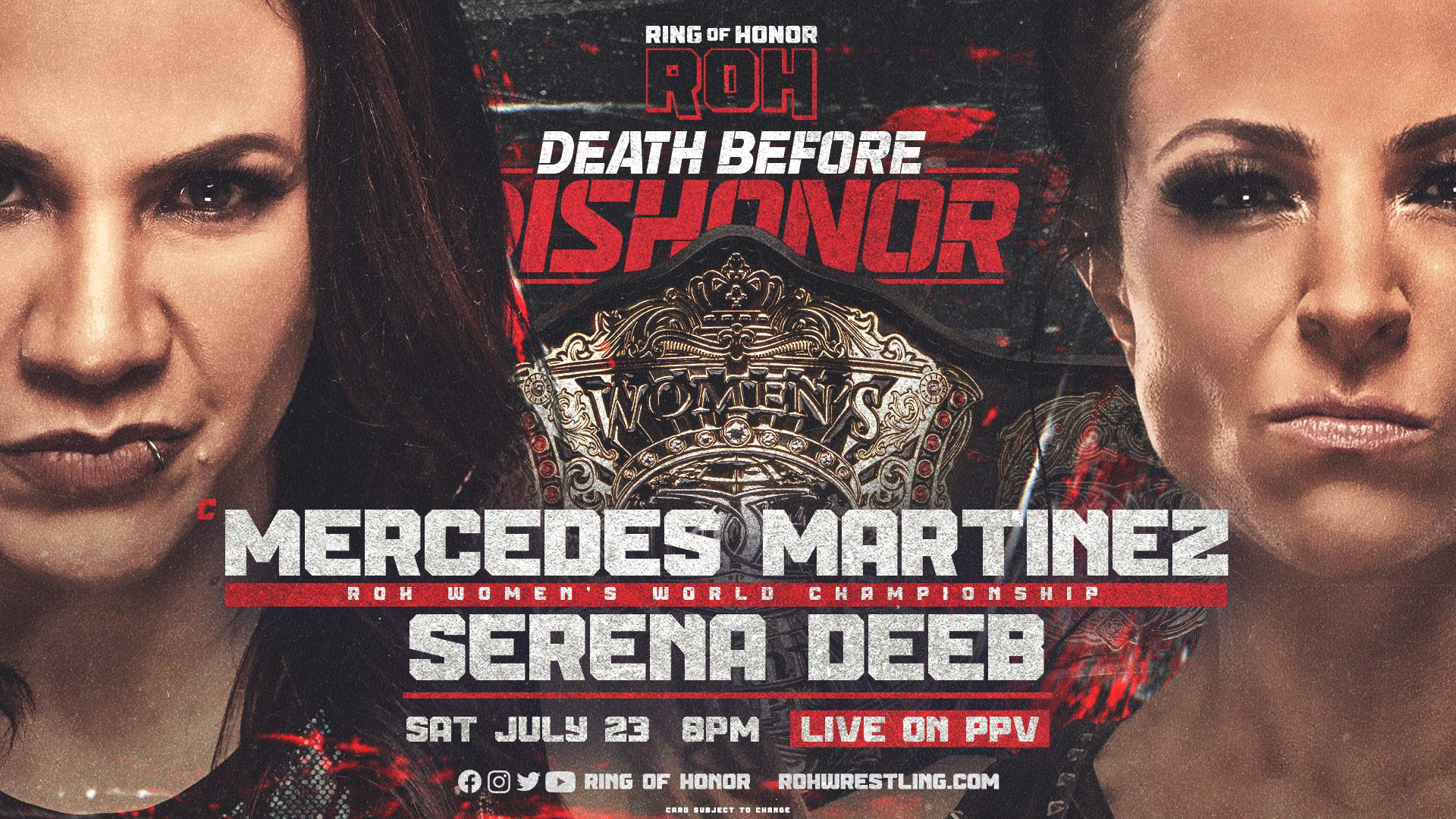 A fantastic women’s match. Neither lass rushed to get everything in ASAP, and it looked like a genuine contest from the start. Deeb utilized her deep well of holds and strategies to counter Martinez’s size and strength. Although she resorted to biting Martinez’s arm to escape one hold, the salty heel managed to win the crowd over with her succession of gameplans against the larger woman. In the end, Martinez caught Deeb and made her tap out with a trapped dragon-sleeper. Good stuff.

One point of constructive criticism, if I may. It’d be nice if Martinez locked some of her stuff in a little more snugly. I enjoy her work, and I’m sure she knows her strength and tries not to hurt anyone. But it’s so loose that I could wriggle my generously-sized skull into that side headlock of hers. Anyway, back to the rest of the ROH Death Before Dishonor Results. 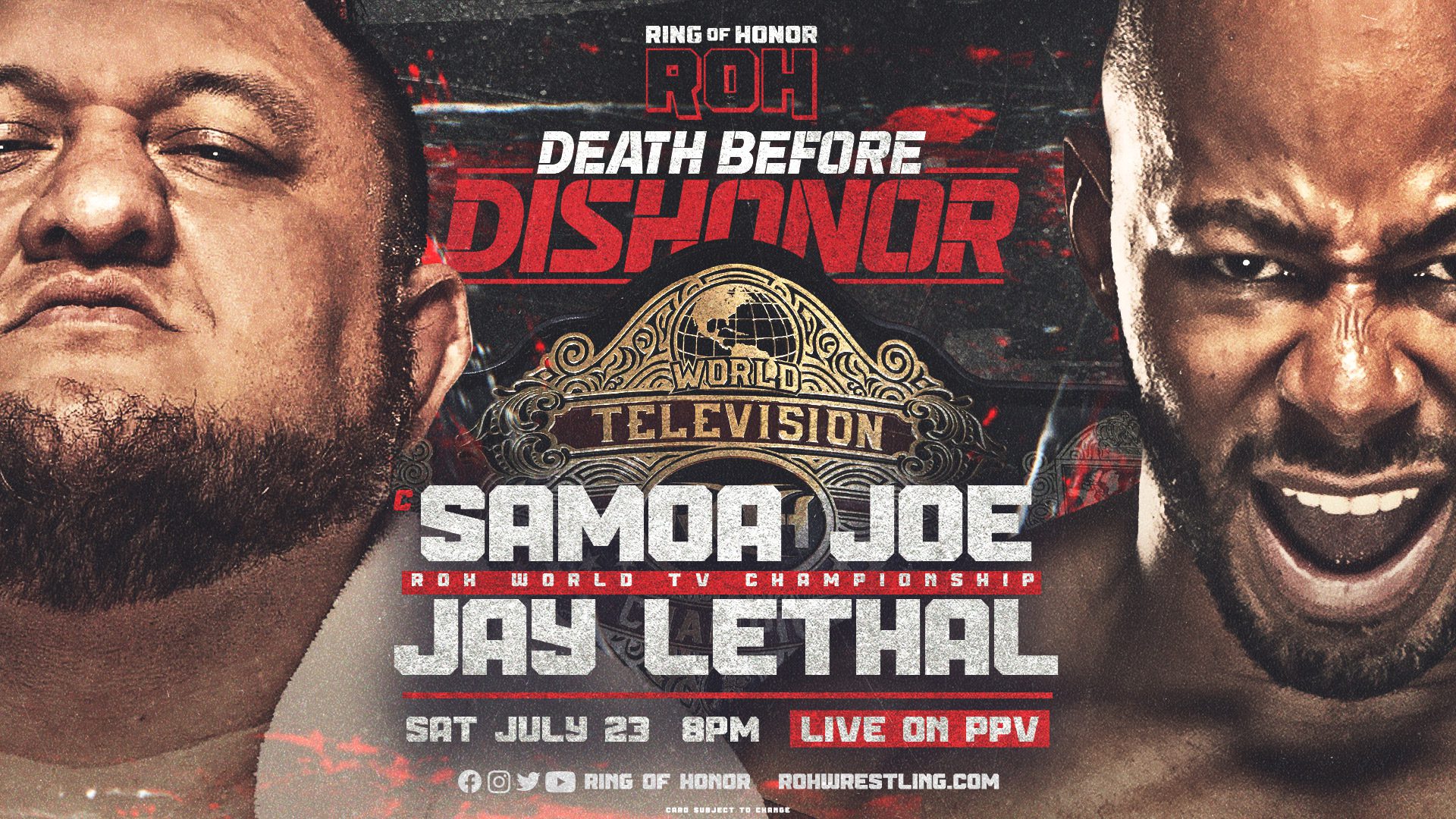 The hype package of the night went to these lads. With a match almost 17 years in the making, it made sense for them to start brawling on the ramp before the bell even rang. These two veterans put on a classic that had the crowd on their feet with surprise counters and 2.9999-counts. At one point, Sonjay Dutt distracted the referee so that Lethal could clock Joe with the belt, but Joe hung on and caught Lethal in the Rear Naked Choke to put him to sleep. 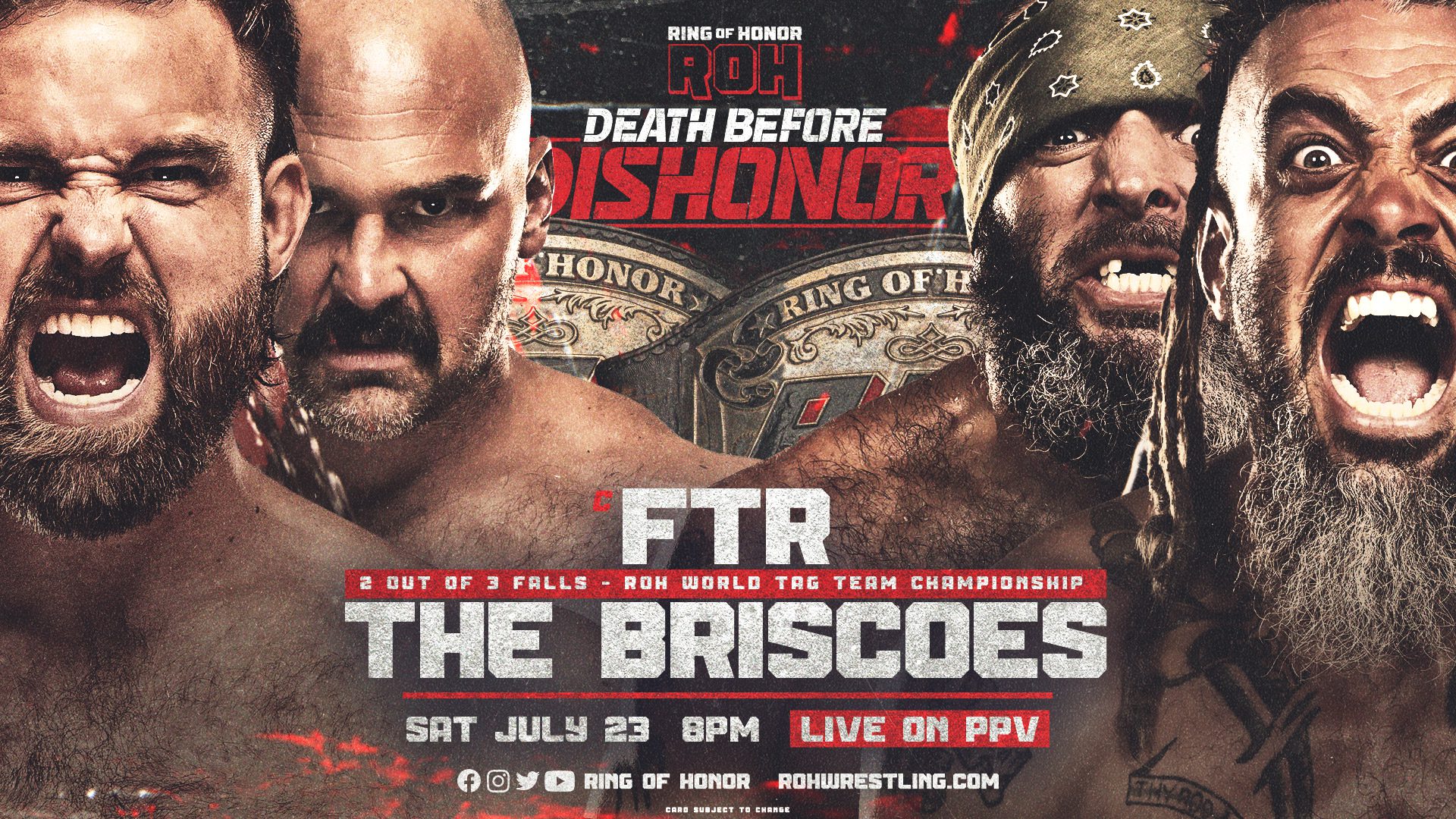 A tag team clinic from these guys. All four of them need a fat bonus in their pay packets for giving everyone in the back a wonderful wrestling lesson.

The first fall went to The Briscoes after they dropped Dax on his head with a Doomsday Device. This gave The Briscoes a target in Dax’s weakened neck, of which they took great advantage. While the referee was distracted, Cash got cracked in the head with the ring bell, but he kicked out of the following pinfall attempt. Not long after this, FTR hit the Big Rig on Jay to bring the score to one apiece. Dax and Jay then swung wildly at each other, but Jay ducked, and the ref was knocked to the outside. Both teams hit their finish and had a visual pinfall, but the dead official made their efforts futile.

When it looked like The Briscoes were about to hit the winning Doomsday Device, Cash appeared out of nowhere and back-suplexed Mark through a table on the arena floor. The final fall was awarded to FTR after Dax hit Jay with a piledriver from the second rope. After the match, FTR invited The Briscoes into the ring to shake their hands before Regal, Claudio, and Yuta stared at them from the ramp.

I thoroughly enjoyed this show. I look forward to watching it a second time tomorrow—good call with opening the night with the World Title match. Claudio was one of the big draws on the card, but people were frothing at the mouth for FTR and The Briscoes; it was definitely the main event tonight.

Lastly, and thankfully, this show didn’t come across like some non-canon, cross-promotional, masturbatory free-for-all like AEW x NJPW Forbidden Door did not so long ago…which was nice.

Thanks for reading these ROH Death Before Dishonor results! Feel free to get in touch on Twitter, SUBSCRIBE to my YouTube channel, and check out everything else I write about over on: