A Decade of Pixar: Monsters University (2013) 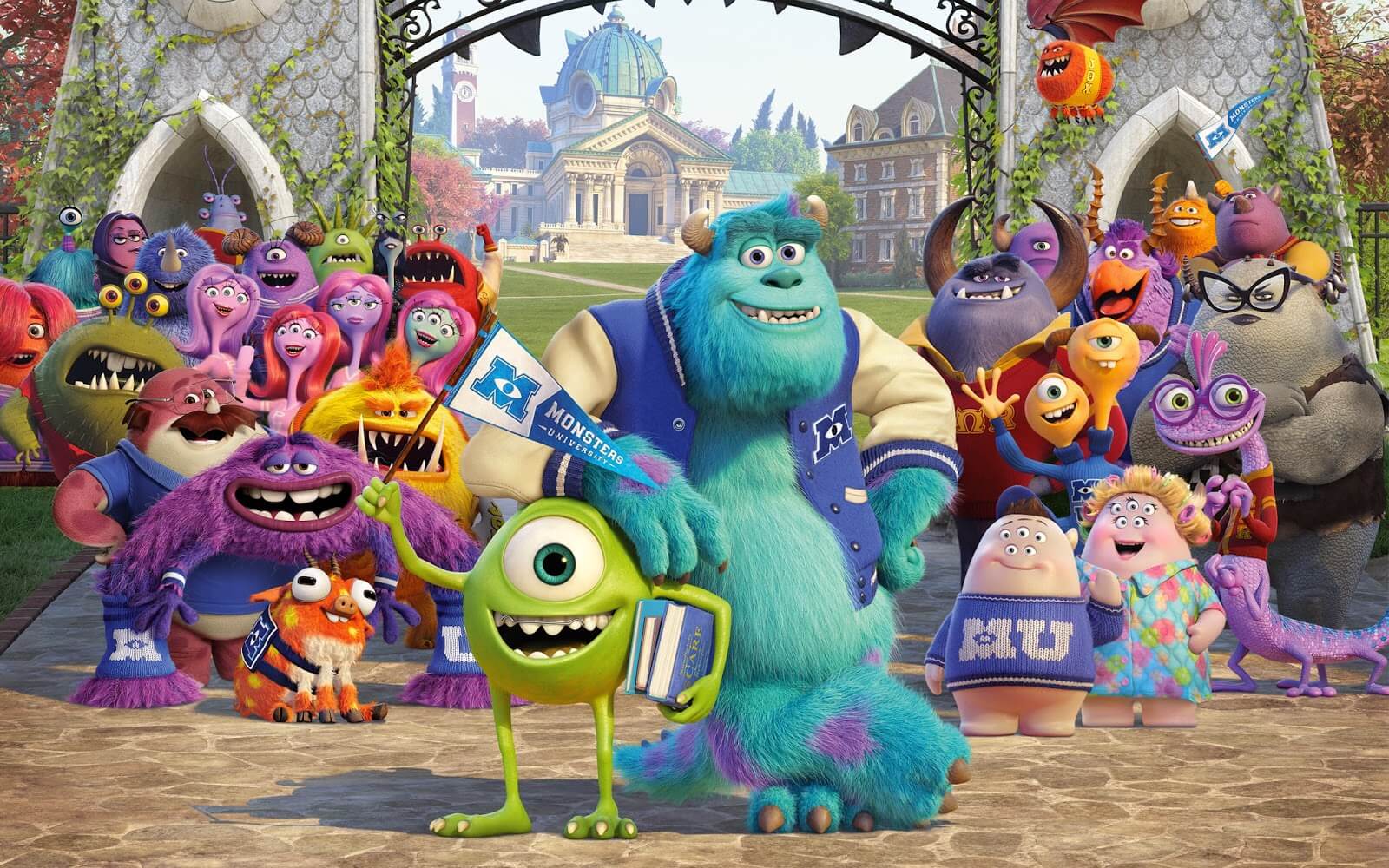 Virginia: Welcome back to A Decade Of, where we look back on ten years in a movie studio’s history. As we continue our series on Pixar, we’ll be taking a look at Pixar’s first prequel, Monsters University. I remember seeing this film in theaters for my birthday in 2013 with my parents and my grandmother. It didn’t make much of an impact on me, so I rewatched it again for our review. Overall, I think the film is fine but nothing special. What do you think, Munir?

Munir: I think Monsters University is an interesting case. First of all, as you said, it’s Pixar’s first (and only) prequel. I think that was a wise choice, in part because the ending of Monsters, Inc. is one of the best in film history. They needed to have a strong story to produce a sequel, and I guess they didn’t find one, so they went the prequel route. Overall, I believe MU is the strongest of the three post-Toy Story 3, pre-Inside Out films. It successfully manages to make a sidekick an appealing protagonist, the new characters fit right into the story, and it has a good message. What I think the film lacks is heart. In Monsters, Inc., what drives the story is the relationship between Sulley and Boo. Here, you don’t have that, and while Mike’s story is good, it’s not as powerful as the original. 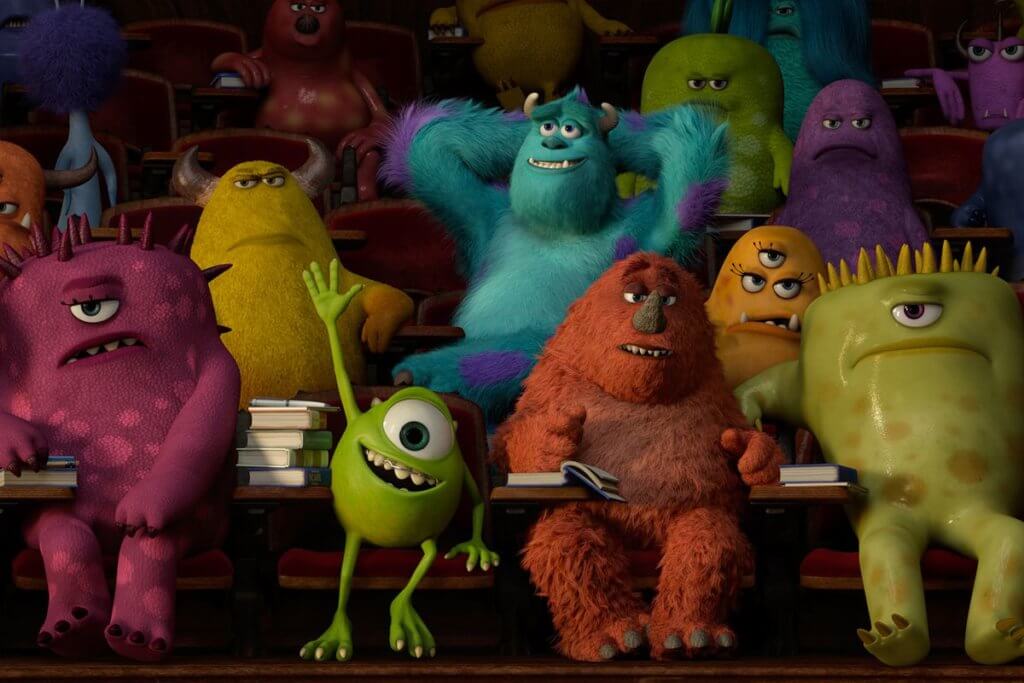 V: I would agree there, for sure. Monsters, Inc. is a surprisingly poignant and touching film, even with all the laughs. Monsters University tries to build an emotional bond between Mike and Sulley that leads to their friendship in the original movie, but it’s too little, too late. I’m OK with Mike as the protagonist, and his motivation makes sense, but ultimately, I don’t like the message that he isn’t meant to be a scarer. And even beyond that, I don’t see why this tale needed to be told. I didn’t have any questions about Mike and Sulley’s past, and I don’t understand the decision to make the story a mashup of Animal House and Monsters, Inc.

M: Well, you could say that of most sequels and prequels (and, right now, of all the live-action Disney remakes). Sure, we didn’t need to know more about their relationship, but I think it had more to do with the Circle 7 debacle. When Disney’s CEO Michael Eisner and Pixar’s CEO Steve Jobs broke off negotiations after Jobs demanded a better distribution deal, Eisner created Circle 7 animation with the sole intent to create sequels to the Pixar films they had the rights to (from Toy Story to Cars). That’s why they were planning Toy Story 3, Monsters, Inc. 2 and Finding Nemo 2. When Bob Iger replaced Eisner, he bought Pixar, dismantled Circle 7, and returned all those projects to Pixar. I think MU was the lesser of two evils because I just think of a Disney Monsters, Inc. 2 and shudder at the possibilities (it gives me Disney direct-to-video cheapquels déjà vu). I have to say that I like the film’s message. I know that Disney has always preached the “believe in your dreams and yourself and anything is possible” mantra, and while that is a good message, in the real world I sometimes found it impractical. In MU, what they are saying, at least in my perception, is that you may not be right for something, but there are always other things that you can achieve. It’s a more realistic approach without being a pessimistic one. I like the college setting, and again, Pixar excels at world-building (the games, particularly, stand out), but in terms of poignancy and more meaningful relationships, it comes up short from the original. 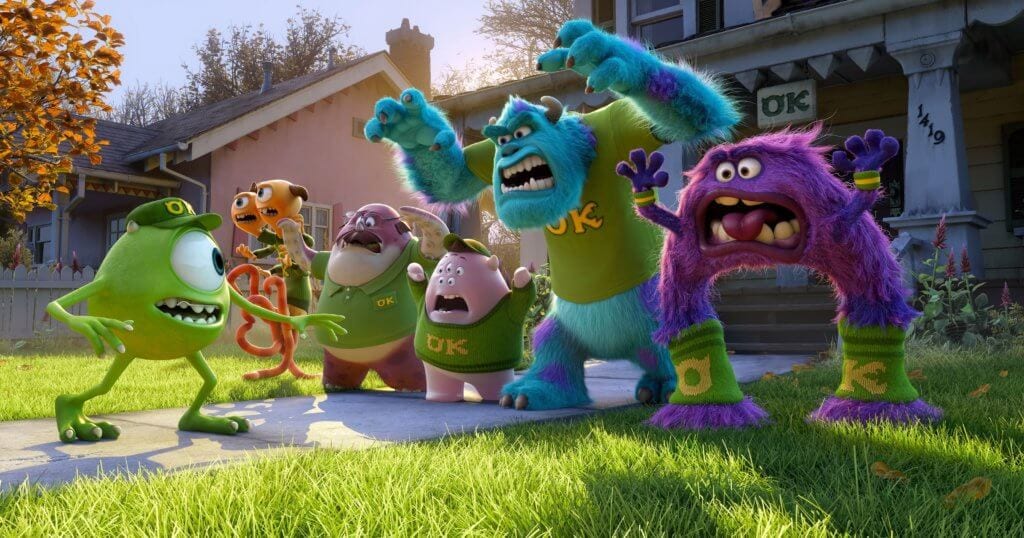 V: I agree that a sequel made by the mother company would have likely been worse, but I probably would have left the original without any continuation or addition myself. Sometimes films really should be self-contained; Up and Ratatouille are some other examples that are, and should remain, stand-alone adventures. That being said, I don’t think Monsters University is terrible, just very average. I like it more than Cars 2 but a little less than Brave overall. One thing that stands out in this film is the improvement in animation since the first one; at the time of Monsters, Inc.’s release, its work on things like fur and scales was groundbreaking. However, in University, it’s a whole new playing field. Randall’s scales, in particular, look fantastic.

M: Animation-wise it’s a marvel to behold, which shouldn’t come as a surprise because it’s Pixar, but still, incredible. Another thing that I like is that it doesn’t have a typical happy ending, one where both Mike and Sulley stayed at the University, graduated, and lived happily ever after. I think another strength in this film is that you don’t have to follow the established path to achieve your dreams. College is not the only way to do it. They both get expelled, and they end up working at Monsters, Inc. from the ground up until they become the superstar duo that we met in the first one. I think it’s an important message, especially for people that can’t afford full college tuitions. There are always other resources and ways to work towards what you want, and I believe that’s an important thing to say. And I think the film, while not essential, ties in nicely with the first one, since Mike wanted to be a scarer but at the end of Monsters, Inc., he found his true calling as a top comedian because laughter is stronger than screams. I like the overall arc that both movies build for the two lead characters. 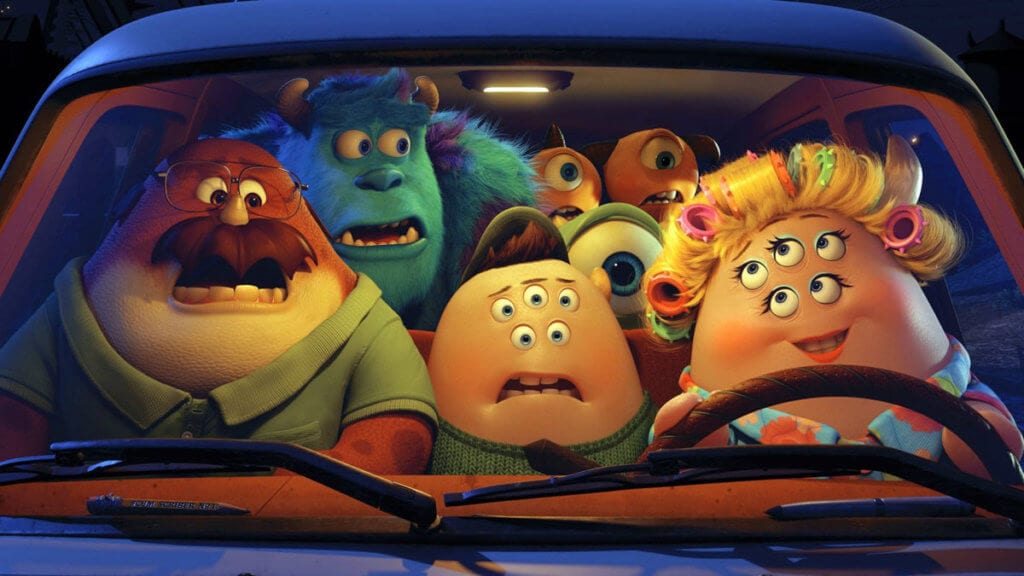 V: I agree. College isn’t for everyone, and it’s good to see that acknowledged in Monsters University. One thing that bothers me is that the film’s central relationship is between Mike and Sulley, but they never connect until the end when they’re at the human camp. I would have preferred more of a gradual build-up to the friendship we see in the original. I also don’t care much for Helen Mirren’s character, Dean Hardscrabble; she’s just mean for the sake of it, and it doesn’t feel justified. Then, when she shows kindness near the very end, it feels as though it comes out of nowhere.

M: Agreed on Dean Hardscrabble. Amazing voice work and character design, but overall, she is too mean and not necessarily a good teacher. Her show of kindness, in the end, was head-scratching because it didn’t fit with what we learned from the character before. Let’s talk about the reception. I was stunned that MU, which got reviews comparable to Brave, didn’t earn an Oscar nomination. The Academy favored what, in my opinion, are lesser films such as The Croods and Despicable Me 2. Frozen was the winner for sure, but I was shocked that MU didn’t get a nom. What do you think? 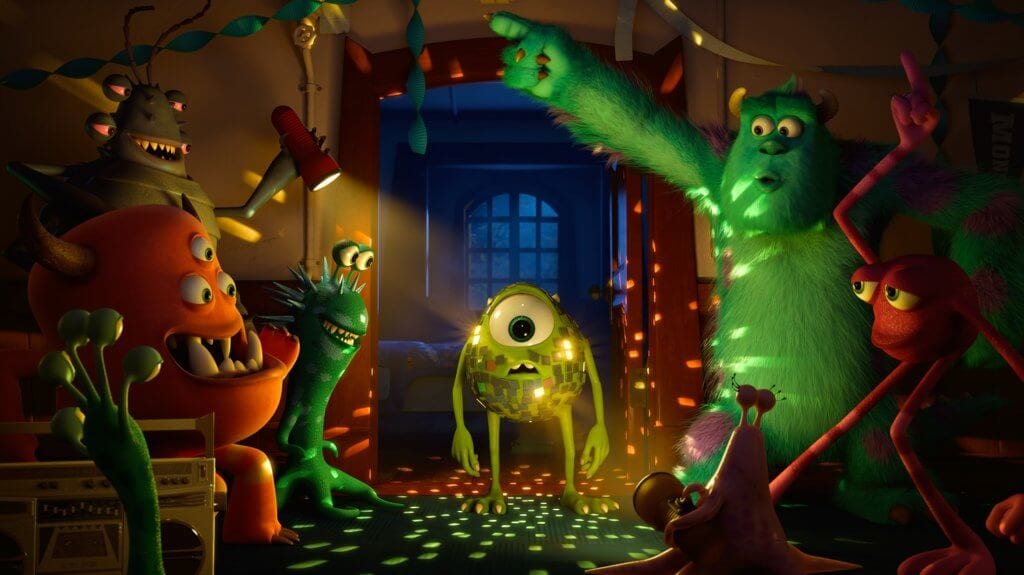 V: I think Studio Ghibli’s The Wind Rises was the best animated film that year, but I can’t say I don’t understand why Frozen was chosen. I do agree that, regardless of its faults, Monsters University is a much stronger candidate than The Croods and Despicable Me 2. I don’t even consider those films to be average; they’re just stinkers. I think the Academy makes a lot of confounding decisions, and voters have even confessed before to not watching all nominees. At this point, I don’t find their input helpful, so I just watch the films myself and make my own decisions, sharing them with friends like you. I don’t think there’s anything wrong with watching the Oscars for entertainment, but I don’t care what they have to say.

M: Agreed with everything. I don’t consider DM 2 a stinker, but it’s not good. And The Croods is really bad. So, to sum up, I think Monsters University wisely avoids the sequel route and give us an amusing but dry film with a good message. It’s not horrible, but it’s also not great. I think it’s a good film that honors and respects the original. 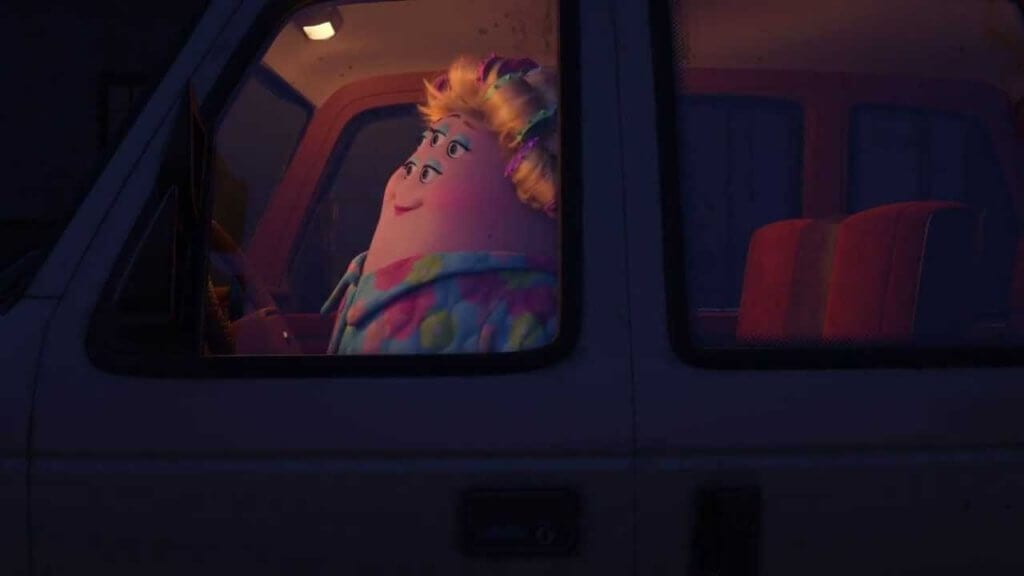 V: I like it a little less than you do. I think it’s alright, but I’m a little mixed on the message, and I find some segments relatively dull. That being said, there is one scene I find rather funny involving one of the fraternity brothers’ mom. I also want to mention the musical score by Randy Newman. It’s not the best he’s done for Pixar, but it is catchy, unique, and sounds like a college fight song.

M: That scene is hilarious and unexpected. Well, that’s all for today. What do you think of Monsters University? Let us know in the comments and stay tuned for our review of Pixar’s second original movie of the decade, Inside Out.

Monsters University has beautiful animation and catchy music, and features the returning superstar cast of Monsters, Inc. However, it lacks the emotional resonance and biting wit of its predecessor.