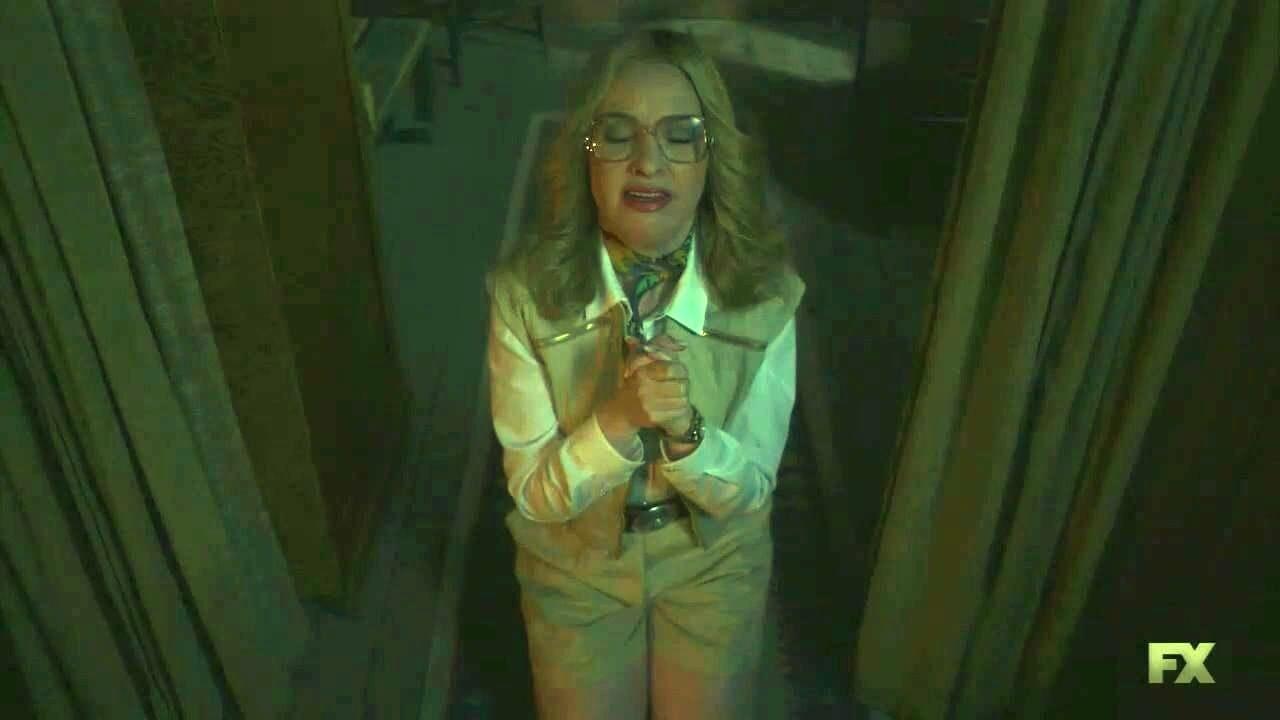 “True Killers” opens with Montana instructing an all-male aerobics class to “Rebel Yell” by Billy Idol with the time card “then.” Richard Ramirez walks in and says that Billy Idol is the truth. After class, Montana finds the corpse of one of the men in the locker room, and Richard says he did it for her. They have sex. She asks him to kill someone else for her: Brooke. The best man at Brooke’s wedding was Montana’s brother, and she blames Brooke for the murders perpetrated by the groom. The story goes back to “Now” as Richard explains why he hasn’t killed Brooke yet. She tells him they have to kill her before Mr. Jingles can. Chet collapses, but Trevor injects him with epinephrine, waking him up and then some. Xavier decides that “Daddy’s” car must still be there, and they should use it to escape. Xavier and Trevor head to get Margaret and Bertie, and tell Chet to wait for them. Trevor finds Margaret mourning over corpses and tries to convince her to leave with them, but she insists on staying and waiting for the campers to arrive. Xavier finds Bertie making sandwiches, but she thinks he’s just going into hysterics. Xavier dives under the table as Mr. Jingles walks in. Bertie tries to play it cool and makes him a peanut butter and jelly sandwich. Xavier tries to sneak away, but Jingles hears him and knocks him out, locks him in the oven, and turns it on.

Meanwhile, Brooke wakes up on the floor, remembering what Donna did to her. She breaks the door down and starts running, but falls into a trap. Donna comes up to her, remarking on her decision to run left. She justifies her actions as being in the pursuit of science, but naturally, Brooke isn’t impressed. Donna leaves her there as bait for Jingles. Bertie lets Xavier out, and he says he’ll get help, but she gives him a knife to end her suffering. Montana finds Brooke in the net and feigns concern, telling her it’ll be over soon. Margaret is having flashbacks to camp 14 years ago, when Jingles made her a wooden bear to watch over her. When the other counselors made fun of her, he said he’d do anything to protect her. Montana finds Richard and tells him about the net. He finds Brooke, but Jingles comes up, and the two killers fight, much to Donna’s fascination. However, Montana comes upon her, and they also fight. Jingles bests Ramirez with ease and leaves Brooke unharmed. However, Ramirez manages to slash Jingles’ leg and stab him in the back. Jingles picks Ramirez up and impales him on a tree branch. Margaret prays to God for the strength to do his will just as Mr. Jingles walks in. He tells her he came back to finish what he started. In a flashback, we see Jingles being dragged away, screaming his innocence, and being put through shock therapy. Margaret tells the story of herself committing the murders and even cutting her own ear off to get revenge on the other counselors. He says that he is the monster that she made him and charges with a knife, but she shoots him dead. Trevor and Chet hear the gunshots just as Montana runs into them. Trevor tells them to go, and he’ll go back for Margaret. However, she stabs Trevor with Jingles’ knife. Jingles runs into Xavier, but then Brooke shows up, and Jingles is gone. They join Montana, Margaret, and Chet, but the car is on fire so they can’t leave. Ramirez rises, shocking Donna. 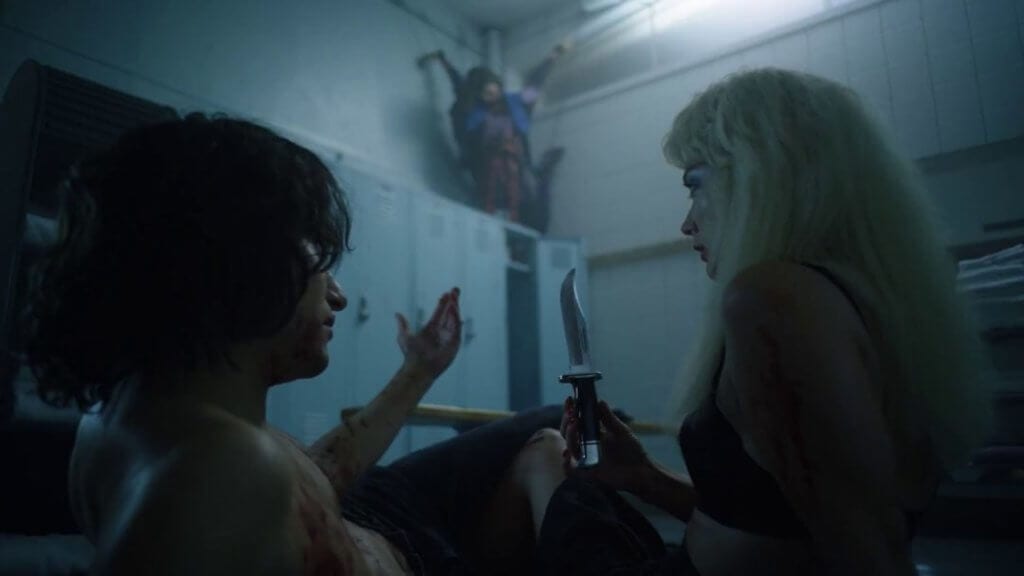 “True Killers” is another revelatory episode following the telling “Slashdance.” I must say, I didn’t expect the episode’s title to be quite so literal. After all, the episode comes right out and answers any potential questions about who the killers are. The opening sequence is funny and very (intentionally) cringey. This union of Montana and the Nightstalker is bizarre, but it works in a twisted way very apropos to the show. The whiny guy who requests that Montana play Cyndi Lauper is kind of funny, and as morbid as it is, I found his demise somewhat humorous once we see who it is. Montana’s motivation to have Brooke killed makes sense, and also explains why she’s been on the poor girl like white on rice since “Camp Redwood.” You just really can’t trust anybody on this show. Additionally, you can’t tell who’s going to live, though I suspect Brooke will ultimately make it, unless they want to go for a real shocker. Characters are dropping like flies every week, and the stakes have never been higher. They’re doing a great job at keeping plot elements unpredictable, but still believable when something happens or is revealed. There were several times in “True Killers” when I thought for sure a character was done for and they survived, or vice versa. The fact that both Mr. Jingles and the Nightstalker were receiving help from employees of the camp is, of course, disturbing. Personally, I’m not really surprised that Margaret is the real “Mr. Jingles,” but that’s because it was properly set up and hinted at. She already seemed crazy, with her religion going well beyond the point of extremism.

I really feel for Brooke, and it’ll be interesting to see when and how she realizes that her friend has been setting her up from the beginning. Montana is clearly even crazier than she seemed, blaming the victim of a terrible tragedy because she believes Brooke did sleep with the best man. This paints several scenes the two girls have shared in a new light, particularly the one in which Brooke told Montana about her ill-fated big day. Montana’s mistaken belief that Brooke was unfaithful also seems consistent with her obsessive focus on sex. It’s just inconceivable to her that Brooke might simply be the victim of an abusive relationship that resulted in tragedy. I was really disappointed to see Trevor die, especially at the hands of someone he desperately tried to help. He was an entertaining character, and his demise surprisingly didn’t involve his penis, so aside from jokes, I’m not sure why they focused on that so much in earlier episodes. It doesn’t bother me much; just a thought. I hope this character returns as a ghost, much like the hiker and seemingly both Ramirez and Mr. Jingles. On that note, Mr. Jingles really has a sad story ultimately, framed by someone he cared about and wanted to protect. If “True Killers” has a message, it must be that life isn’t fair, and you don’t always get what you deserve, for better or worse.

1984’s music continues toward greatness in “True Killers”. Again I really like the songs featured, and Mac Quayle’s musical score, inspired by John Carpenter’s score for Halloween, is very creepy and atmospheric. Acting is top-notch, with stand-out performances this week from John Carroll Lynch, Billie Lourd, Leslie Grossman, and Zach Villa. Sets, costumes, and cinematography are looking great, as usual, and really, I just can’t wait to see what happens next.