“Our grandfather was Egon Spengler. He was a Ghostbuster.” 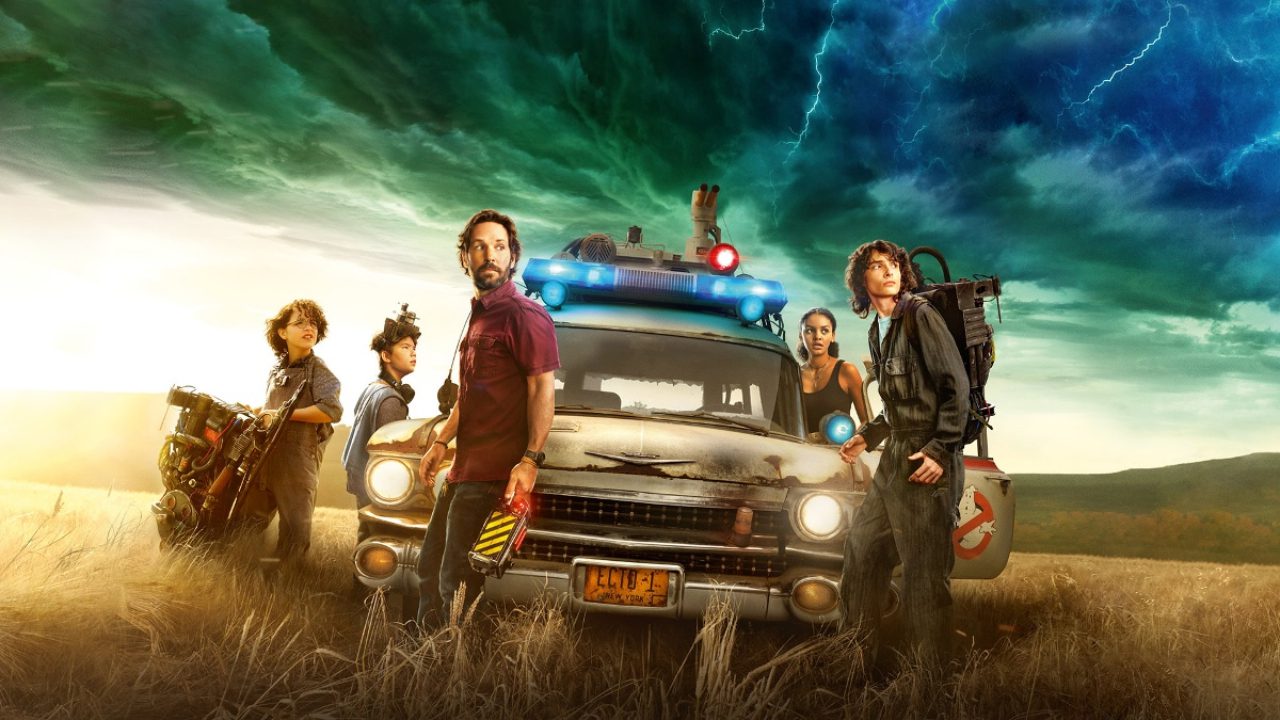 Ghostbusters: Afterlife is probably in the upper echelon of far-removed sequels to beloved films, but that’s not saying much. It isn’t a great movie; it’s got some dreadful characters and a story that should come with a stamp that assures us it’s made out of 100% recycled script paper. It’s also buried in ‘Member Berries, outright fetishizing elements of the original movie. But it’s also got a terrific lead, great special effects, and a genuine reverence for Ghostbusters, even if that can sometimes be to its detriment. And it’s got Paul Rudd; thank God for Paul Rudd.

When she goes so broke that she loses her apartment, Callie (Carrie Coon) moves to her recently deceased father’s farmhouse in small-town Summerville, Oklahoma. While she stews over her dad’s absence and her son, Trevor (Finn Wolfhard), looks for love with local girl Lucky (Celeste O’Connor), Callie’s daughter, Phoebe (Mckenna Grace), learns that something supernatural is going on in Summerville – something strange in the neighborhood, you might say – and her grandfather may have faced a similar threat in 1984.

The new characters are alternately some of the best and worst things about Ghostbusters: Afterlife. Mckenna Grace’s Phoebe is the nicest surprise because when she first shows up, I was convinced I’d hate her. In those early scenes, she’s got a personality in the way that modern Hollywood thinks people have personalities – that is to say, she’s quirkier than Zooey Deschanel in a thrift store. She’s better than her family, though. Trevor is a dishtowel with hair, present simply to be a snarky teen who isn’t particularly good at snark. And Callie is oppressively obnoxious, incapable of talking about anything except how much she resents her father. But being better than these two is mild praise, and Phoebe is still bland here. Her love of science is her persona, and based on a lot of recent entertainment, I figured it would stay that way.

But that changes when they arrive in Summerville. Actually, that’s not right; it happens on the first day of school after their move when Phoebe and Callie run into Paul Rudd’s Gary Grooberson, the summer school teacher. As soon as Rudd stumbles onto the screen, Ghostbusters: Afterlife starts to come alive, injected with a shot of fun and excitement that is the closest anything in the film so far has come to the classic that spawned it. And as much as it does for us in the audience, Rudd’s humor takes hold of Phoebe. Suddenly, she’s more than just “unrealistically smart kid who loves science;” she’s got a drive to figure out what’s going on in her new home, who her grandfather was, and how to relate to people in a way she previously couldn’t. Mckenna Grace plays each aspect of Phoebe’s suddenly compelling character perfectly. 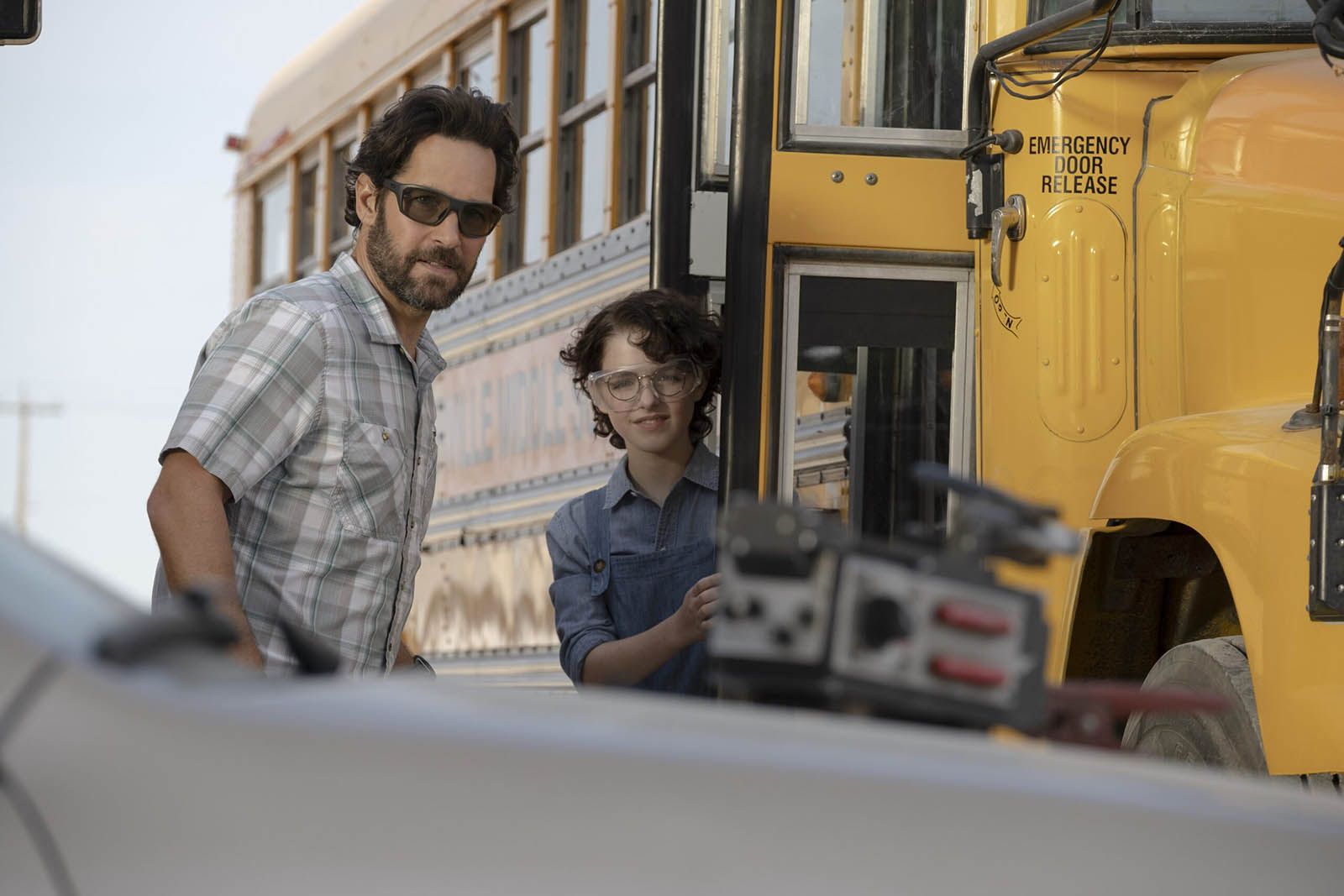 This is also when we meet “Podcast,” played by Logan Kim. At first, he seems like another annoying movie kid, but he becomes indispensable to Ghostbusters: Afterlife, the necessary loose, kooky counter to Phoebe’s over-analytical practicality. Phoebe, Grooberson, and Podcast make a great team, and they’re what give this struggling film a heart. And it needs one because Callie and Trevor never make it beyond their ho-hum beginnings the way Phoebe does. Callie is grating, finding an excuse to turn every single conversation she has into a diatribe against her father. I understand that she’s resentful, but how can anyone stand to be around her? And Trevor is so stereotypical that his scenes stop the movie cold, taking us on a detour where the new kid in town is trying to impress a pretty girl who’s caught his eye. Who cares about this tripe when there are ghosts to bust?

Well, to be fair, there aren’t that many. Ghostbusters: Afterlife could have done with some more spooky action. In Ghostbusters, the guys face several ghosts before the halfway point, giving us a good idea of what they’re up against while entertaining us with the imagination needed to create a variety of spectral monsters. Here, we only see one before the last half of the film, and it’s that sort of Slimer-lite guy who was in the trailers, whose name – as revealed by the credits – is “Muncher.” I understand that this is a movie about discovery, but why not have more ghosts and excise Trevor and Lucky, who bring nothing to the table anyway? 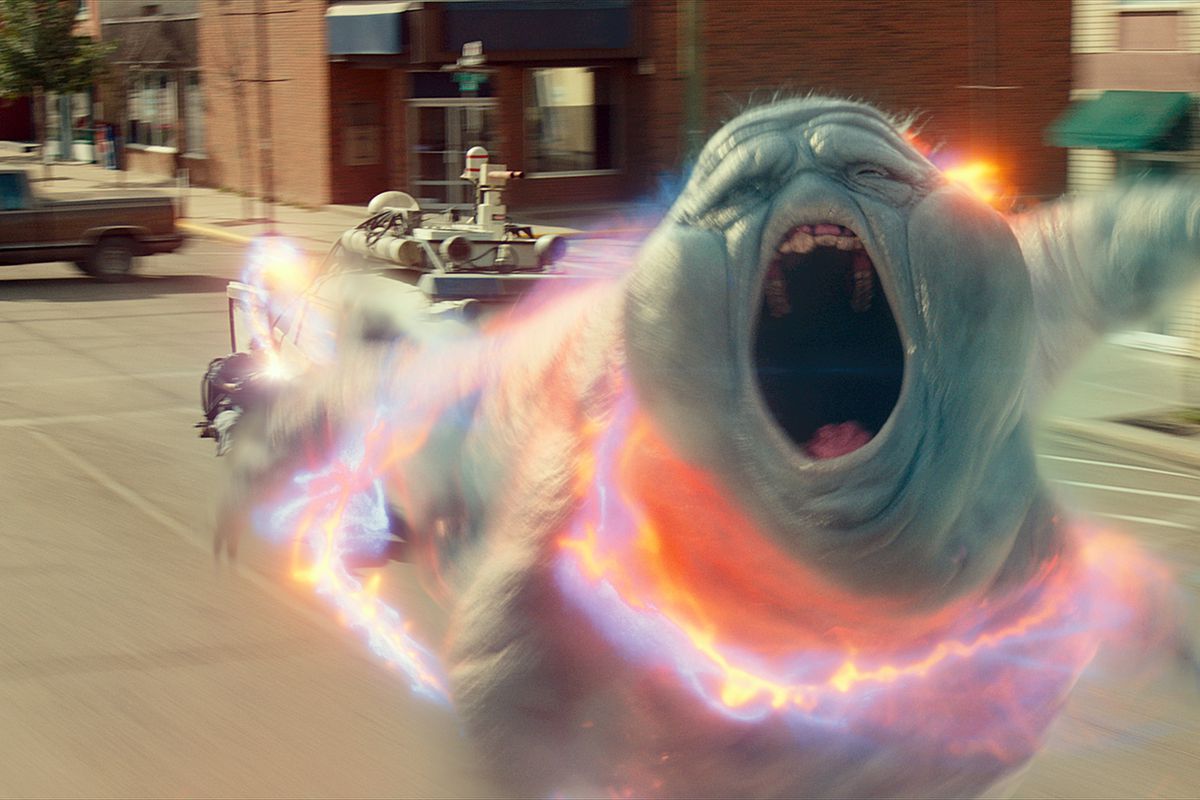 Aside from Muncher and a short montage that mimics those in the first two movies, all of the supernatural beings are ones we’ve seen before, and that’s immensely disappointing. Like The Force Awakens and so many other sequels before it, Ghostbusters: Afterlife is so desperate to win back an audience soured by Paul Feig’s disaster that it ends up acting like a remake, replicating as many plot points as possible and deathly afraid of doing something different. People who have seen Ghostbusters will be ten steps ahead of every plot development in this movie, and everyone has seen Ghostbusters because it’s Ghostbusters. The special effects are good, and Ghostbusters: Afterlife manages to avoid the pitfall of “updating” antiquated visuals while losing everything that made them special. But once the digital glamor wears off, you’re just rolling your eyes waiting for the villains you’ve seen before to do what you know they’ll do.

In that vein, every piece of imagery from the original, from the equipment to the ectoplasm, is filmed with long, almost sensual shots. Jason Reitman clearly wanted to make sure we know that Ghostbusters: Afterlife respects its roots. A few times would have been okay, but it happens so often and starts so early, you eventually want them to just get on with it already. On the other hand, the score is masterful, relying almost exclusively on pieces of Elmer Bernstein’s perfect original. Those familiar notes help make Afterlife feel like it belongs in the same world as Ghostbusters. I know some people probably won’t like this, but for me, it worked, and is maybe the most successful holdover from the original. 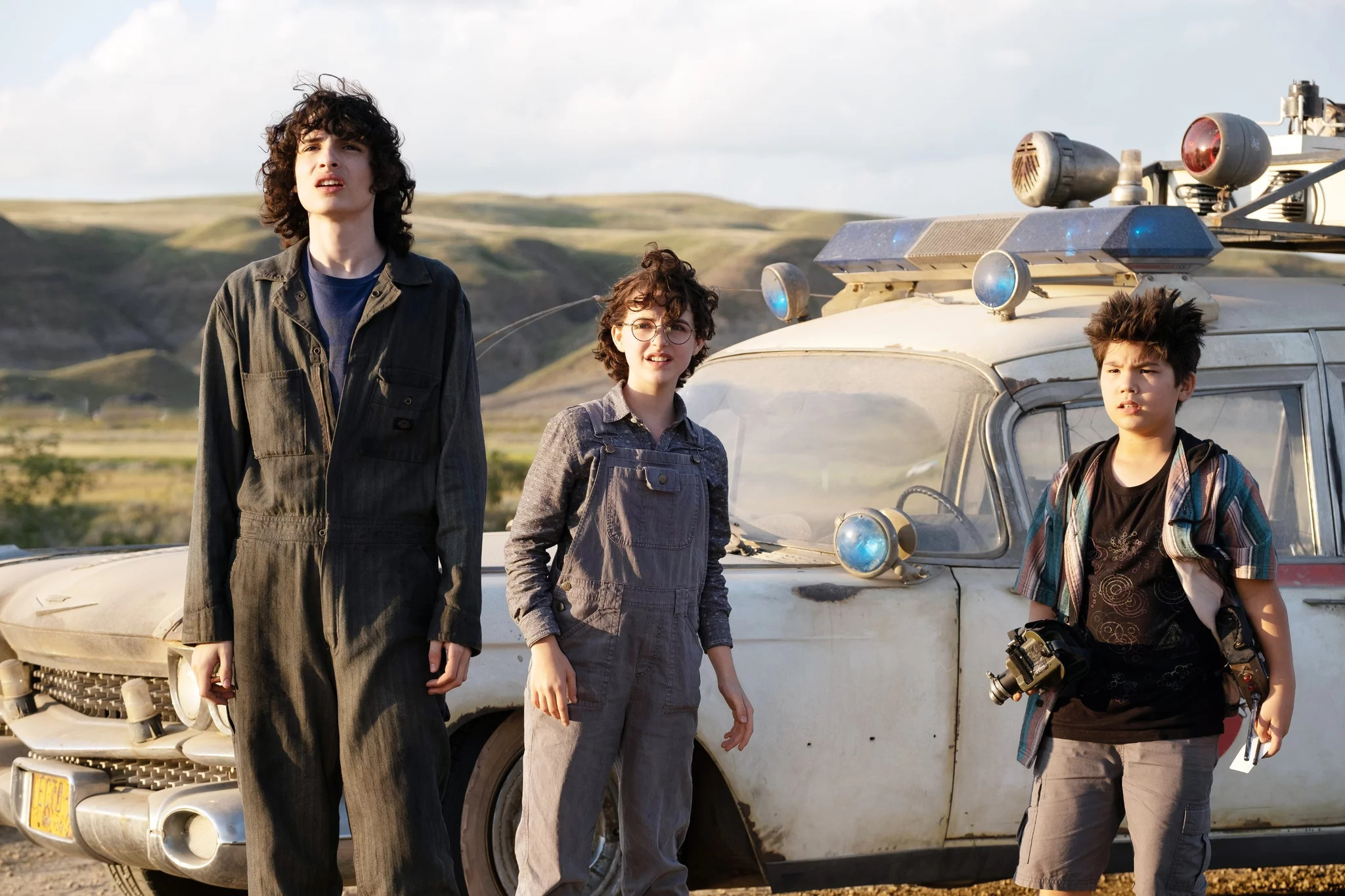 Where does that leave the Real Ghostbusters? I don’t want to say too much because I don’t want to ruin one of the film’s great pleasures, but seeing the guys turn up again in Ghostbusters: Afterlife is mostly a joy. Reitman makes a few strange decisions, going for ordinary instead of iconic. I get it, in that it’s in keeping with the schlubby nature of the Ghostbusters, but considering how he treats things like PKE meters and traps, it feels a little disappointing. And while Harold Ramis’ death is handled almost perfectly – much better than I thought would be possible – some of the details of his past make little sense and feel out of character for him and the other Ghostbusters. But for the most part, the Ghostbusters make it through the movie intact, and these days, it’s hard to ask for much more than that.

Ghostbusters: Afterlife is an okay movie that I suspect will feel better than it is because people are so used to debacle. It has great characters and awful characters, fun story beats and overly familiar plot points, touching homages and relentless copying-and-pasting. The special effects are good, the music is fantastic, and the original Ghostbusters are mostly treated well, but by the time it’s over, you’ll feel like you’ve seen it already, and better. It’s worth watching, but I doubt many will want to watch it again.

Ghostbusters: Afterlife is an okay movie that I suspect will feel better than it is because people are so used to debacle. It has great characters and awful characters, fun story beats and overly familiar plot points, touching homages and relentless copying-and-pasting. The special effects are good, the music is fantastic, and the original Ghostbusters are mostly treated well, but by the time it’s over, you’ll feel like you’ve seen it already, and better.